The Las Vegas strip can be overwhelming — the glare of neon lights, the flashing and fluorescent animations on slot machines, the towering billboards advertising magic shows and concerts. Opportunities to quiet your mind and take a breather from the chaos are a few and far between. But FlyOver Las Vegas, a new attraction on the strip, fills that void. FlyOver takes riders on an exhilarating tour of stunning landscapes and natural monuments — and it also happens to be an oasis away from the typical flashy Vegas attractions. 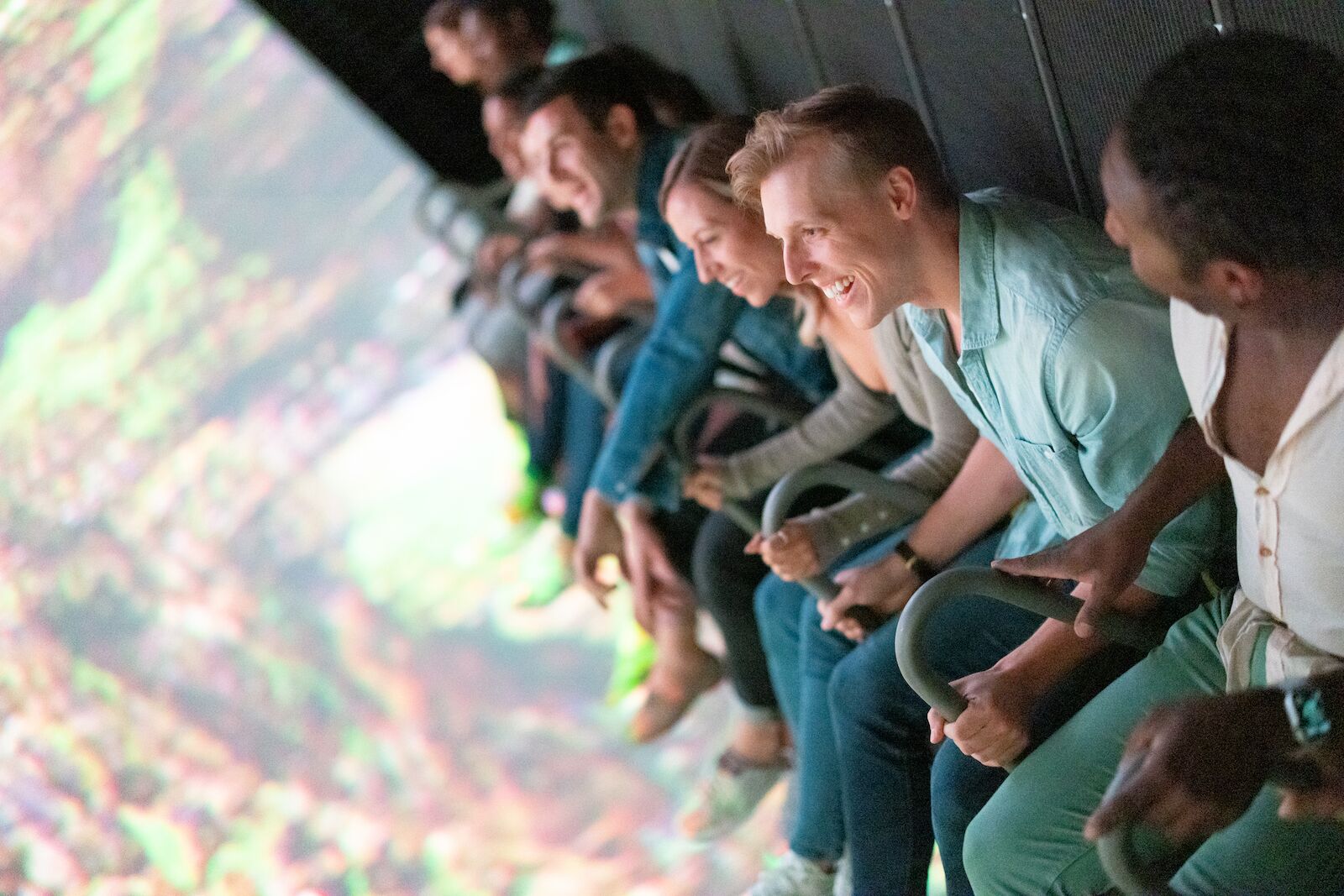 Located across the street from the Park MGM hotel and next to the Hard Rock Cafe, FlyOver Las Vegas is exactly what it sounds like. Riders strap into a rollercoaster-esque seat suspended over a 52-foot screen that projects a stunning array of footage. By matching motion to the video and angles, your eyes and brain will be fooled into thinking you’re literally flying over the landscapes. Soarin’ Around the World at Disneyland in California is a similar type of so-called flight motion simulator (though that one takes riders on a global tour).

There are two FlyOver rides available in Vegas. The first tours the western United States, stopping in Nevada, Oregon, Washington, Montana, California, Arizona, New Mexico, and Utah. The second one takes riders on a spectacular excursion through Iceland, to many landscapes that aren’t accessible by foot or car, including glaciers, volcanoes, and mountain peaks.

There’s a virtual reality aspect to FlyOver Las Vegas, too. During the “Real Wild West,” tour, riders chase stallions through Yellowstone, follow a red plane on a nosedive into the Grand Canyon, and trail surfers bobbing in the ocean off the coast of San Francisco.

When the plane in the Grand Canyon spins through the air, it really does feel as though the ride is flipping upside down alongside it — but of course, it’s just an illusion. When the scene switches to a view of the ocean, a light mist actually sprays riders’ faces to heighten the sense that they’re hanging over the ocean waves like a seagull. It’s a very well-executed use of 4D.

Perhaps the most alluring aspect of the “Real Wild West” ride is that it offers glimpses of several national parks, including Utah’s famous Zion and Arches national parks. Of course, it can’t compare to being there in person, but offering your a family a glimpse of the natural wonders that pepper those few remaining wild places in the United States is a gift. It’s like a vacation within a vacation for people who don’t have the resources, time, or even interest that it takes to plan on a trip to a national park (though Zion is only about three hours by car from Las Vegas). And it allows you to get a sense for some of the landscapes nearby Las Vegas in case you want to add an extra day or two outside the city on to you next trip.

The experience is thrilling at times, though riders with vertigo or a fear of heights should be prepared for moments when their stomachs might roll and lurch as the ride glides and dips between mountains and cliffs. It’s the kind of experience that will delight and surprise children in particular, but it’s also phenomenal for adults exhausted from traipsing through the pandemonium of Vegas. It’s hard not to be wowed by the high-definition sights FlyOver managed to capture.

However, at the same time, the experienced is surprisingly relaxing. The lights and music of the Las Vegas strip quickly fade from your mind and the calm and quiet of nature takes over as you glide over each spectacular landscape, instrumental music playing in the background. Jack Kenn, general manager of FlyOver Las Vegas, even calls the ride the “zen zone.”

Kenn told Matador Network that what makes FlyOver a much-needed addition to the strip is that it’s a “quick hit, low cost” activity that appeals to the whole family, not just recreational gamblers and guys on bachelor parties. At just under nine minutes, FlyOver is a fast but absorbing activity to get families tired of walking up and down the strip all day off their feet for a while. And if the parents need a break from not just walking, but walking with kids, they can send the older kids in to FlyOver alone while they enjoy cocktail at the lobby bar.

Another bonus? The allure of Vegas lies in its legendary nightlife, but FlyOver offers families an indoor daytime attraction. While the Las Vegas pools are the main draw for families visiting in summer, FlyOver Las Vegas provides something new to do during the days year-round.

The only downside is the pre-show, a perhaps admirable attempt by FlyOver to give riders a history lesson on the world they’re about to enter (either the Western United States or Iceland). The pre-show is only six minutes long, but it pauses a bit of the excitement you may feel walking into the ride and mostly only covers basic history you could easily find on your own online.

Still, it’s hardly enough of a reason to skip FlyOver next time you’re in Vegas, especially if you have kids in tow. When the magic shows and showgirls get overwhelming, FlyOver offers an opportunity to decompress before you hit the strip for another round on the slot machines.

Tickets for the Las Vegas FlyOver experience start at $24 for children and $34 for adults.