In culinary scenes around the world, “local” is a narrowing word. It shrinks the ingredient list from a national to regional level, and usually defines specialized dishes that conform to a similar flavor profile. In Slovenia, “local” means something completely different. Rather than denoting exclusivity, the word represents the inclusive and diverse nature of the country’s culinary options.

“In Slovenia, we’re very lucky with our ingredients,” says Jorg Zupan, chef and owner at the Michelin-starred Restaurant Atelje in Ljubljana, “because we have the coastline, we have the north, mountains, forests, foraging. It’s just three hours from one side of the country to the other, so that means everything is local. You never have to travel far for fresh ingredients of all kinds.”

Bordering Italy, Austria, Croatia, and Hungary, Slovenia is a melting pot of culinary influences, as well as diverse climates for food growth – from the warm Mediterranean coastline to the cooler alpine north. Given this unique blend of ecosystems and the availability of fresh ingredients, it’s no surprise that Slovenia’s culinary scene has been on the rise. 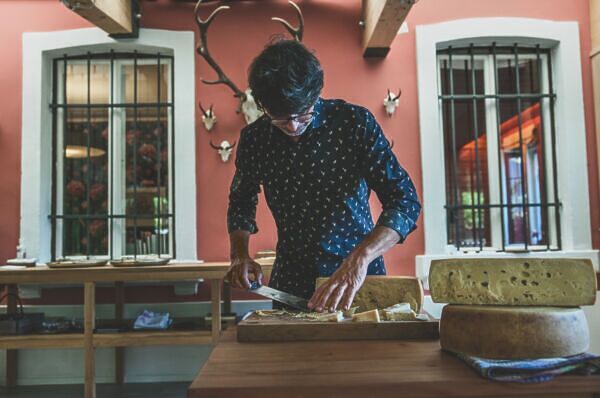 You might expect Slovenia’s neighbor, Italy, to be replete with fine dining establishments, but Slovenia is punching far above its weight when it comes to fine dining. The Michelin guide visited Slovenia for the first time in 2020, and recognized over 50 restaurants for their quality – some of them even receiving stars. For a country of just two million people, and smaller than New Jersey, that’s pretty impressive.

You can visit Slovenia for Lake Bled, the ski slopes, and its ancient castles, but here’s why you’ll stay for its surprisingly robust fine dining scene.

If you could sum up Slovenia’s culinary culture in two restaurants, it’d be Hisa Franko and Hisa Polonka, both located in the northwestern town of Kobarid. Hisa Franko is perhaps Slovenia’s most famous eatery. A two Michelin-starred restaurant owned by Ana Ros, Hisa Franko is largely responsible for putting Slovenia on the culinary map.

Ana Ros, the restaurant’s owner, and chef, was named the World’s Best Female Chef in 2017 and has since become Slovenia’s most famous chef. Her reputation was even cemented when the Michelin Guide awarded her restaurant, Hisa Franko, two Michelin stars – the most of any restaurant in the country.

Ros is completely self-taught and crafts her menu with help entirely from regional partners. She works with local foragers, shepherds, cheese makers, hunters, and fishermen to source deer, goats, fruits, trout, and wild plants, all of which feature heavily in Hisa Franko’s dishes. As a result, the food here is truly a reflection of the Soca Valley, where the restaurant is located. A tasting menu here will set you back at least $200, but there’s nowhere better for an elevated take on Slovenian cuisine.

Just a five-minute drive will bring you to Hisa Polonka, in the heart of Kobarid. When Zupan says, “The traditional Slovenian cuisine is more peasant-like. A lot of starchy foods… but mostly grains, vegetables,” he could almost be talking directly about Hisa Polonka. Owned by Ana Ros’ ex-husband, Valter Kramar, the restaurant specializes in more affordable fare, in the form of time-honored family recipes. In this rustic centuries-old cottage, with the warmth of your grandmother’s house, you’ll indulge in dishes that are as nostalgic for Kramar as they will soon be for you. Make sure to try the English roast beef, Kobarid štruklji (baked pastry rolls filled with apple, walnuts, and other ingredients), and shepherd’s frico (an Italian potato pie). The restaurant is particularly popular with hikers, cyclists, and skiers, who flock to the region for its mountainous landscape. 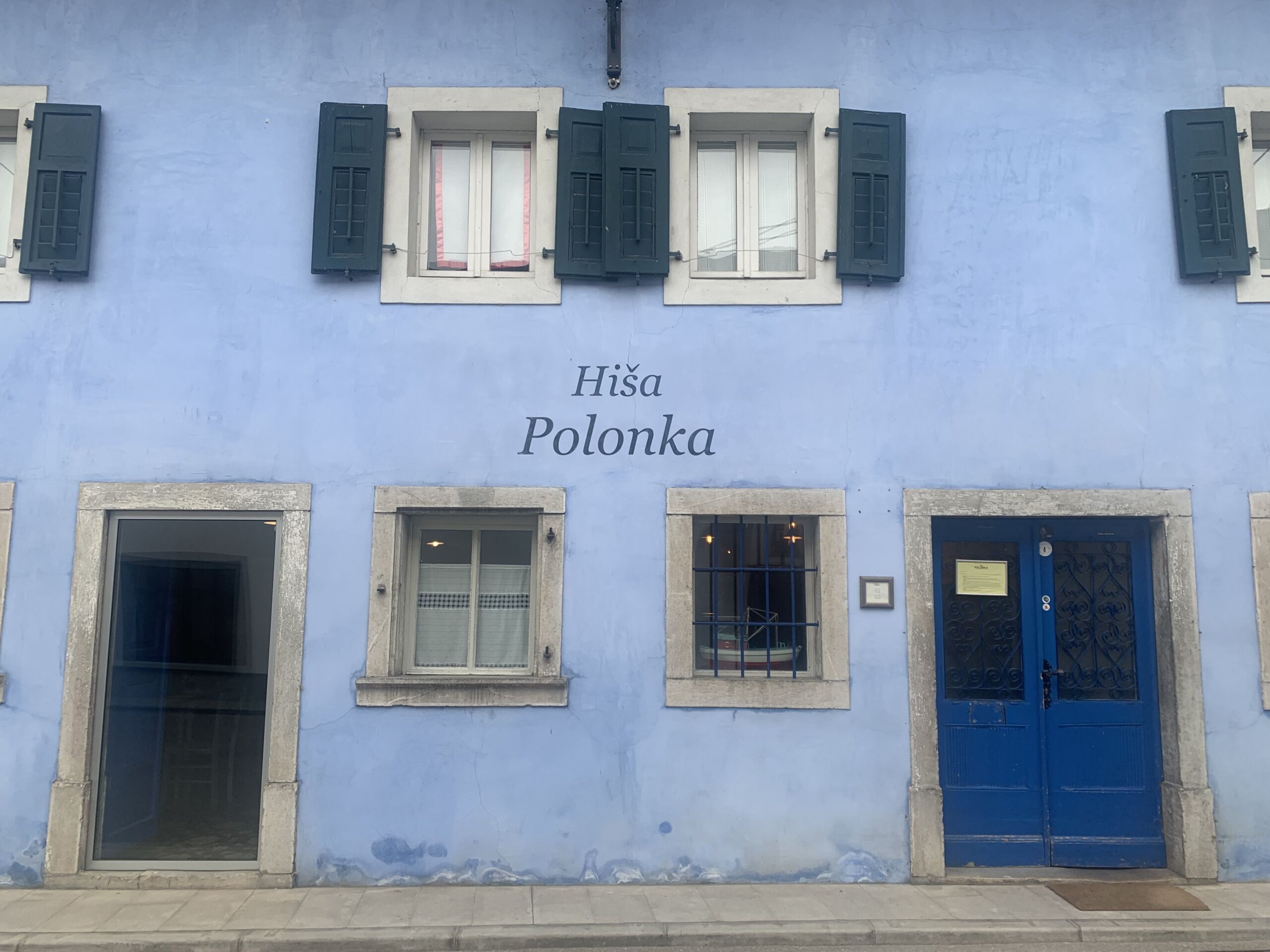 The magic of Michelin

The Michelin Guide is the gold standard of the restaurant industry and played a major role in raising awareness of Slovenia’s excellent food scene. Michelin’s recent visit recognized over 50 restaurants in its guide, many of which might never have otherwise gained the notoriety they deserved. “The culinary scene has just started to evolve over the past 10 years,” Zupan says. “The first step was organizing the Michelin guide visit.”

Indeed, the guide awarded Zupan’s Restaurant Atelje one Michelin star, cementing its reputation as one of the best restaurants in Ljubljana. If you’re in the capital and only have time for one fine dining experience, make it Restaurant Atelje. Lacking the pretentiousness of some other Michelin-starred eateries, you won’t find white tablecloths, robotic servers, or intimidatingly polished decor here.

This simple yet refined restaurant manages to serve up some seriously delectable cuisine, while also putting you right at ease. Its food is inspired by the seasons, with 90 percent of products made in-house; they make their own yogurt, bake their own bread, preserve their own vegetables, and mature cheeses right there on the property. You won’t find a dinner menu online, as its offerings are constantly changing based on the availability of seasonal ingredients, but that’s exactly what keeps the dining experience here so fresh. You could visit three times in the same month and the tasting menu would likely be completely different.

If your journey through Slovenia takes you northwest to Maribor, the country’s second-largest city, a visit to Mak Restaurant should be on the docket. The recipient of a Michelin plate, rather than a star, Mak is nonetheless one of the most talked-about restaurants in Slovenia, largely thanks to its chef and owner David Vračko.

The eccentricity of the Mak Restaurant experience became immediately apparent within the first five seconds. Vračko greeted us at the door, asked us to open our mouths, and sprayed schnapps into our mouths using what looked like a bottle of hand sanitizer. The tone now set, we enjoyed an eight-course meal that felt more like a performance than a dinner, complete with background music ranging from classical to hard rock, a four-foot-long pepper shaker, and a wisecracking chef who appeared between courses to entertain the diners. During the first dessert course, he emerged with a tub of ice cream and a boom box, and proceeded to blast The Piña Colada Song while scooping pina colada ice cream into our hands (yes, our hands). Spend some time in Maribor and you’ll quickly realize that Vračko is a local legend – and it’s easy to see why.

Nowhere is Slovenia’s love of the outdoors and food better exemplified than the Teta Frida (or Aunt Frida) chocolate shop and factory in Maribor. Just outside the city, you’ll find the headquarters of this Slovenian chocolate brand, which rivals the best chocolates in Belgium, specializing in handcrafted chocolates using sustainably-sourced cocoa from western Africa. In addition to simply visiting the shop here and leaving with a suitcase full of chocolate souvenirs – Teta Frida specializes in praline cakes – you can sign up for a chocolate-making class. Classes teach you all about chocolate production, and you’ll even be able to grind your own cocoa beans, decorate your chocolate bars with dried fruits, hazelnut, cardamom, ginger, and other spices, and of course, indulge until you’re too queasy to drive home. 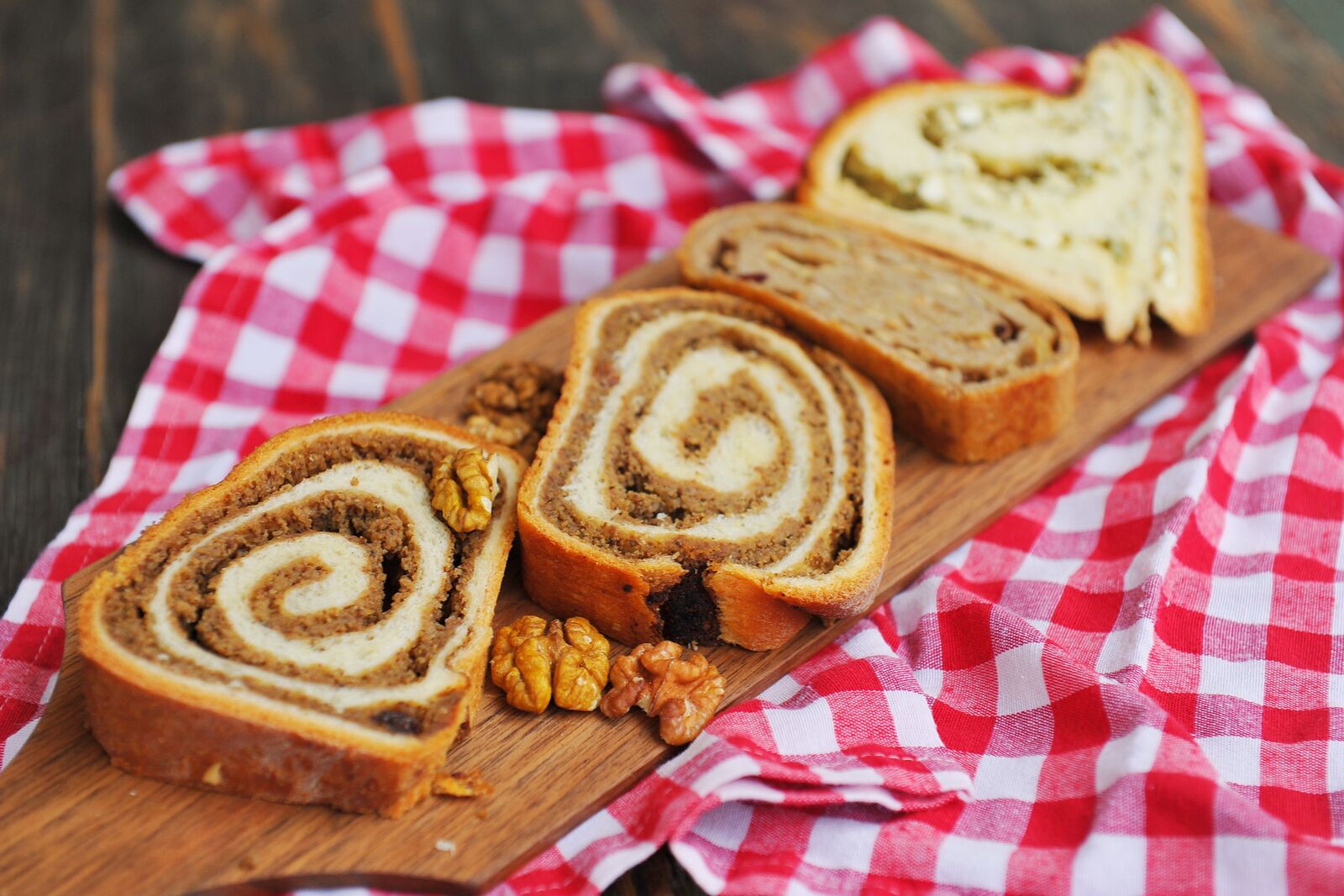 The best part about Teta Frida, however, is that you don’t have to drive home. Right on site, there’s a glamping complex called Chocolate Village by the River, which feels a bit like stepping into Willy Wonka’s chocolate factory. Each cabin here has chocolate toothpaste, chocolate soap, and chocolate shampoo, and the village’s glampsites – some of which are treehouses – are named after different kinds of cocoa.

Slovenia didn’t exactly invent chocolate, however. One dessert you really can’t get anywhere else is potica, a rolled pastry with a variety of sweet fillings, and the closest thing Slovenia has to a national dessert. Traditionally eaten on festive occasions, in the form of a large cake, potica can be filled with hazelnut, plum, chocolate, poppy, and more. One woman in Ljubljana, however, is truly revolutionizing the potica game. Janja Strumbelj, the owner of the lePotica shop, started crafting mini poticas so people could more easily sample a variety of flavors. This seemingly simple innovation has made the dessert more accessible to visitors, who no longer need to buy a whole cake to enjoy this traditional treat.

Where to go wine tasting in Slovenia

When a country right next to Italy (that isn’t France) claims to have a world-class wine scene, you might scratch your head and view the claim with skepticism. Slovenia’s wine culture is no delusion of grandeur, however. The country has a long wine tradition dating back before the Ancient Romans and is even home to the oldest grapevine in the world in Maribor – clocking in at around 400 years old. 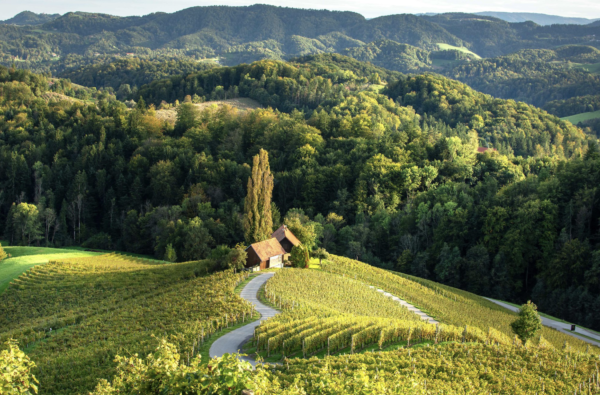 Slovenia has three distinct wine regions – the Primorska region in the southwest near the Mediterranean coast, the Posavska region in the southeast, and Podravska in the northeast by the Austro-Hungarian border. My journey took me to Podravska, whose rolling green hills and mountainous backdrops are reminiscent of Tuscany. The hills here – many with a view over the border into Austria – are covered in vineyards and punctuated by winery farmhouses, where you can even spend the night.

Opok27 is one of the newest wineries in the Posavska region, owned and operated by ​​Katja and Gregor Leber-Vračko. The young couple’s passion for both wine and hospitality is immediately evident, with a wide selection of wines, a restaurant serving fresh seasonal food, guest rooms for rent, and a patio overlooking the vineyards. It’s easy to hop between the region’s vineyards sampling local wines – particularly Slovenia’s famous orange wine – staying the night at different properties, and indulging in fresh cuisine. It’s the perfect affordable alternative to a wine weekend in Italy and France, and you won’t be sacrificing any taste or beauty.

The best way to experience Slovenian wine, especially if you only have a day, is by taking Big Guy’s Wine Tours. The “Big Guy” in question, Jernej Lubej, stands tall at over 6’4”, though neither his presence nor his vast knowledge of wine is intimidating. He offers personalized wine tours designed to fit the needs and interests of guests, including tastings at a variety of vineyards and cellars in Maribor and the surrounding countryside. As a complete wine novice myself, I’m always a bit nervous about exposing my ignorance during wine tastings. Lubej quickly and unpretentiously put me at ease, however, by recommending the best wine to pair with a helping of Chicken McNuggets.

Whether it’s wine tasting in a countryside vineyard, Michelin-caliber dining in Ljubljana, or bathing with chocolate soap, Zupan’s prediction rings true. “There’s a bright culinary future ahead,” he says. “I certainly see Slovenia as a food destination, not just in the future, but now.”

Road TripsHow To Plan the Ultimate Road Trip Through the Balkans
Tagged
Food + Drink Travel Slovenia
What did you think of this story?
Meh
Good
Awesome

I Just Traveled 3,300 Miles Through Europe. These Were My Favorite Moments.