There’s a fiery pit in Turkmenistan’s Karakum Desert that’s been ablaze since 1971. Ever since Soviet geologists seeking oil mistakenly drilled into a cavern filled with natural gas. The rig collapsed, the pit opened up, and the scientists set it on fire to burn off the dangerous, leaking methane gas. That was over 40 years ago. 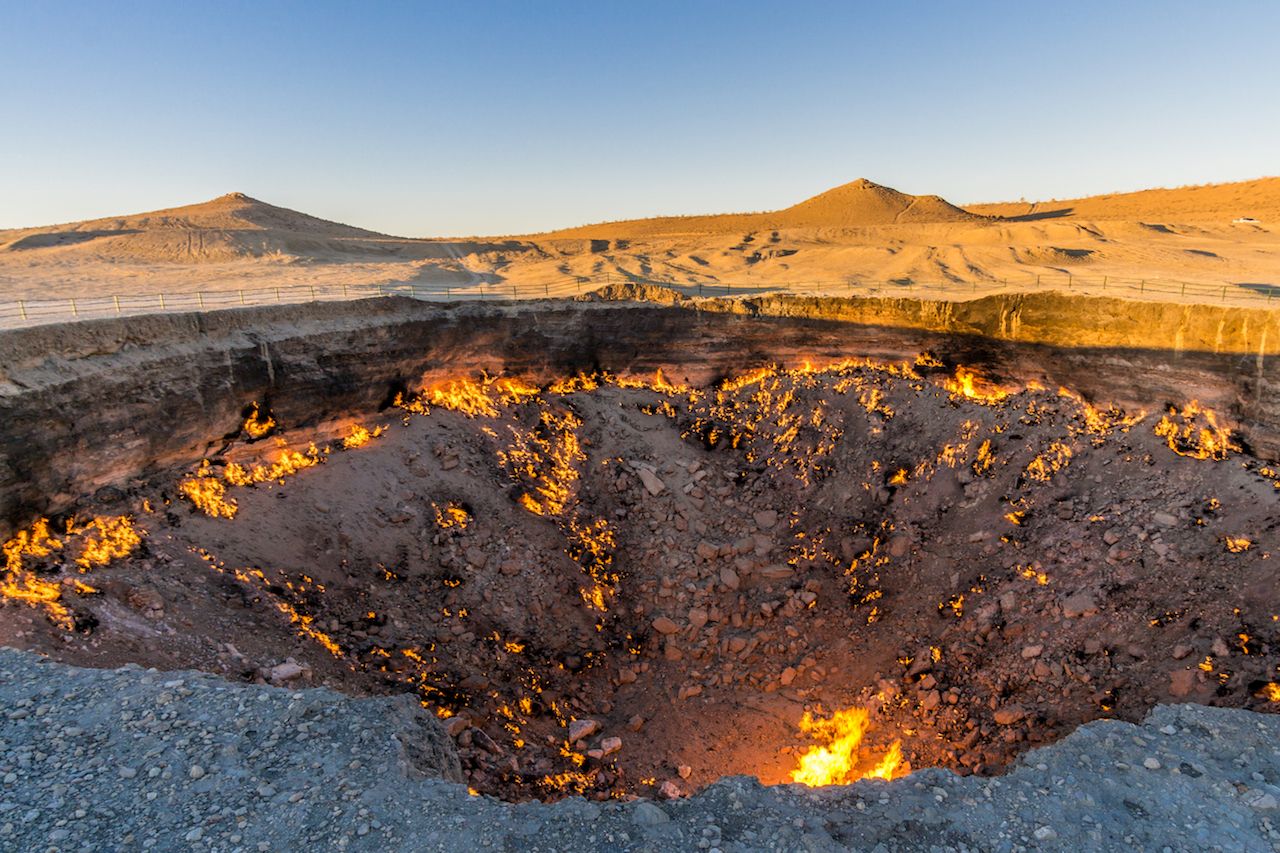 This scorching site is the Darvaza gas crater, but locals are more likely to call it the “Door to Hell” for obvious reasons. The same reasons that have intrigued travelers and made the massive crater a must-see for the intrepid in Central Asia.

Those lucky enough to make it inside Turkmenistan, that is.

Turns out hell doesn’t sit behind a wall of cackling orange flames but a seriously thick layer of red tape. Anyone brave enough to stand at the lip of the crater, its ashy mouth grinning 230 feet across, must first obtain a visa, an easier task almost anywhere else in the world.

Turkmenistan is up there with North Korea in terms of difficulty of entry. Granted, while the US government has banned travel to North Korea, citing its history of detaining US citizens under a tomato-red banner reading “North Korea — Level 4: Do Not Travel” on the state department website, Turkmenistan is officially open to tourism. Yet according to the Human Rights Watch, it’s among “the world’s most isolated and oppressively governed countries.”

Entry requirements for US citizens include getting a certified letter of invitation from the host government, applying for a visa, and paying a registration fee. Transit visas allow for three to five days of unaccompanied travel, but they’re increasingly hard to get. Longer stays require tourist visas, valid for up to three weeks; an accredited tour group or guide; and registration with the State Migration Service (SMS).

Rejection rates are high, particularly among dual passport holders as dual citizenship isn’t acknowledged, and registration issues could lead to deportation or even arrest.

Of course, the rules and regulations don’t ease up inside the country. Several areas are restricted to travelers without special permits granted by the SMS, particularly along the Caspian Sea and near the borders of Afghanistan, Iran, and Uzbekistan, including Daşoguz, home to the UNESCO-listed monuments of Kunya-Urgench.

The state department also discourages public displays of affection for all travelers and notes that same-sex relations between men are punishable by law. There are even regulations around photography, much like in North Korea, so travelers should always ask before whipping out their iPhones to capture the architecture.

But the North Korea comparison doesn’t end at visas and strict customs (in both senses). 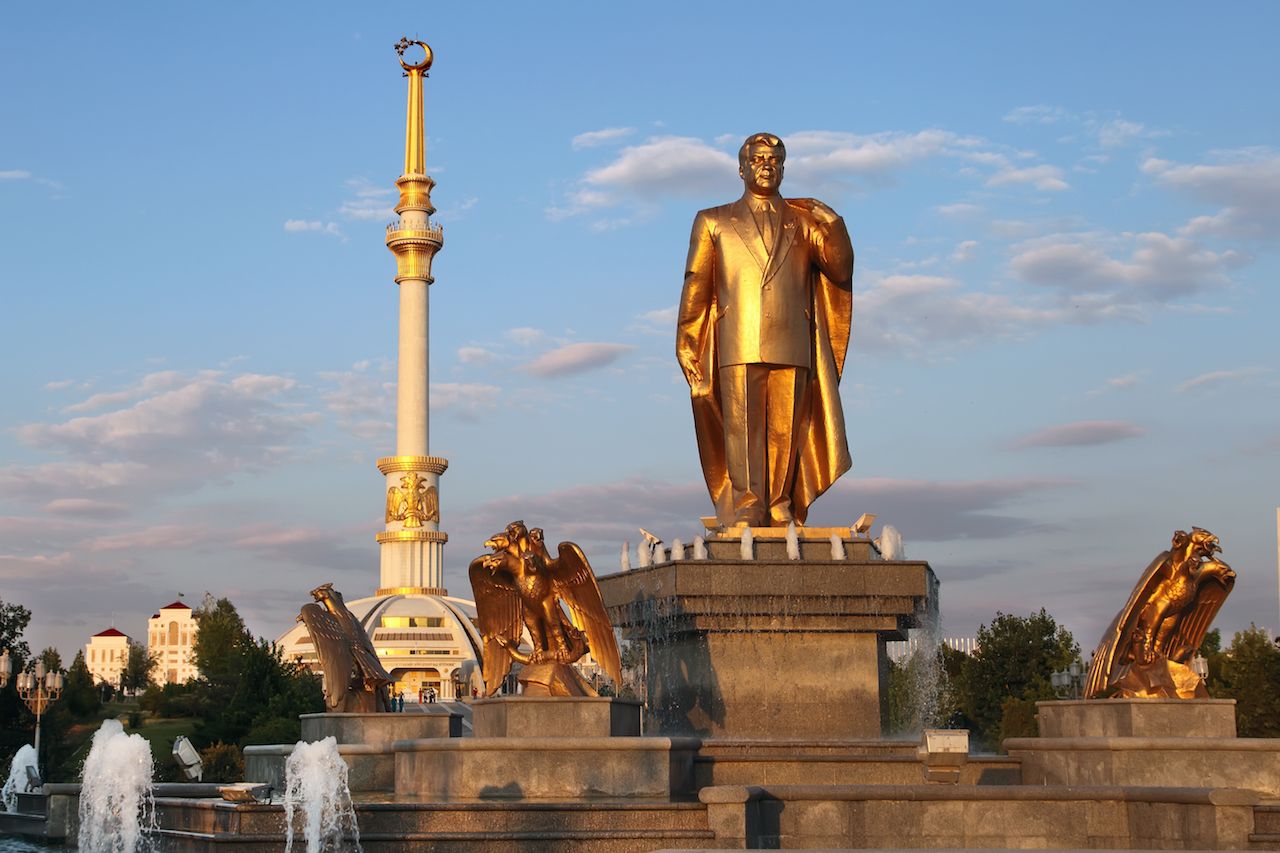 Like the East Asian nation led by Kim Jong Un, Turkmenistan operates under a dictatorship. At the helm is president Gurbanguly Berdymukhamedov, under whom the country’s track record for human rights has been abysmal. Before him was totalitarian ruler Saparmurat Niyazov, famous for stoking a massive personality cult over his 16-year, post-Soviet-independence presidency. 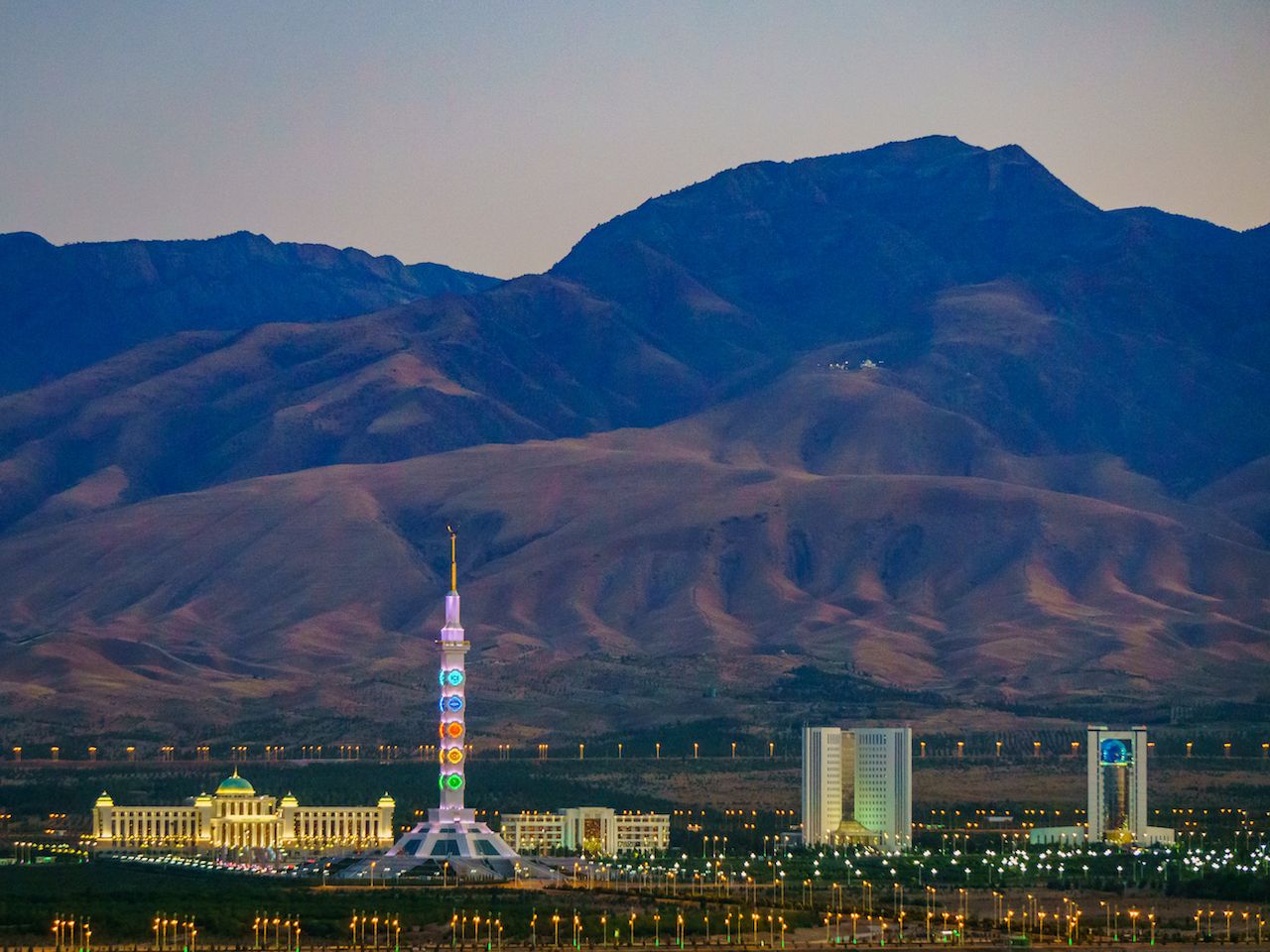 Like Pyongyang, capital city Ashgabat is more a prop than a metropolis. A flashy piece of propaganda with gold-domed, white-marbled architecture; more green spaces than you’d expect; and grand boulevards that are almost always empty.

It’s like a ghost town decked out in Nashville’s neon lights.

Filmmaker David Farrier describes feeling “terribly alone” in the city (sometimes called “the city of the dead,” he notes) in an article for The Guardian on his travels through Turkmenistan while shooting his Netflix documentary series Dark Tourist. Farrier masqueraded as a sports reporter, reminding readers, “Turkmenistan doesn’t exactly embrace a free and open press.”

His is an unusual situation, of course. Tourism in Turkmenistan is limited, but it is possible. For some, like the dark tourists who inspired Farrier’s series by going places most people don’t like talking about, the country’s unattainability even gives it a certain allure.

Though most of us will probably never feel the heat of the “Door to Hell” up close, anyone who goes through the proper channels, finds a legitimate tour company, and manages to get approved for a visit to Turkmenistan will discover the sandy ruins of Silk Road cities like Merv, mesmerizing mosques, and an overwhelmingly hospitable people. For all its oddities, Ashgabat also has grand monuments and museums.

Turkmenistan is one of the most closed-off countries in the world for travelers. But it might just be worth a try.

CultureHow To Do the Ultimate Silk Road Trip
Tagged
Travel Insider Guides Turkmenistan
What did you think of this story?
Meh
Good
Awesome

I Stayed in Turkmenistan in a Hotel Run by Secret Police