“You still want to go to that concentration camp?” my friend asked me as we crossed into Poland from Lithuania. It was the eighth day of our road trip through the Baltics, we were embarrassingly hungover, and I could tell from his tired tone what he hoped the answer would be.

From the outset of the trip, when I first raised the idea of going to Treblinka, I knew he wasn’t terribly enthused. I couldn’t blame him. To a non-Jew, the prospect of spending a sunny June afternoon walking around a cemetery, where one of the greatest atrocities in human history took place, isn’t exactly appealing.

“Yeah, I’d like to go,” I said, which was my polite way of saying, “There’s absolutely no way I’m skipping this.”

I was raised in a not-particularly-religious Jewish family — we ate lasagna for Passover this year — but the Holocaust has nevertheless been part of my ethnic identity for my entire life. Not visiting the camp simply wasn’t an option.

“I feel kind of awkward going to a concentration camp, you know?” said my friend, as if special cops would be stationed at the entrance to expose and shame gentiles.

The idea of charting a GPS course to a concentration camp feels incredibly strange. Eighty or so years ago, millions would have done anything to avoid this place, and yet here I was Google Mapping our way there. The drive took us from a major highway to roads through small villages, and then into a dense, remote forest. As we plunged deeper into the Polish countryside, and the camp drew closer, I began suspecting that — unlike in the past — Treblinka would not discriminate between Jews and non-Jews. It would be awkward and troubling for both of us.

I was speaking as much to myself as I was to him.

Uncomfortable history is the most important history.

Driving to Treblinka feels a lot like driving into a thunderstorm before the rain starts. The quiet forest doesn’t feel tranquil, as it should, but somehow eerie and unsettling, and you find yourself looking for signs of darkness at every turn. Few actual signs mark the way. One, just outside the nearest village, simply read “Treblinka” with a forward arrow, while the next, in the thick of the forest was at the camp’s entrance. “Barracks,” it said, “Officer’s Quarters,” “Extermination Chambers,” and “Graveyard Memorial.”

“Where first?” my friend asked, trying not to appear as anxious as he clearly was.

“The graveyard, I guess.”

It sounded ugly coming out of my mouth.

As we walked the tree-lined path to the graveyard and memorial, along railroad tracks that once conveyed a reluctant cargo, I reminded myself that this was not just a morbid indulgence in dark tourism. Visiting a concentration camp is, on its most superficial level, a historical experience — but not like a visit to Rome’s Colosseum. You’re not supposed to stroll through the camp with a camera around your neck, marvel at the remains of old buildings, and revel in a peaceful day in the forest. You’re supposed to be uncomfortable. You’re supposed to feel like you don’t belong there. This kind of history is not beautiful, or even remotely palatable, but that’s what makes it important.

“I wonder what it looks like,” said my friend. “The graveyard. I wonder if they’ve changed it since then.”

We had been walking for 20 minutes along train tracks. We’d hardly seen anything yet, but I could already tell my friend’s attitude was changing. The place disturbed him, as it disturbed me, but the weight of its historical significance finally seemed to be sinking in, overwhelming his reservations. We tend to prefer history that thrills rather than disturbs, but that ignores the troubling episodes of humanity that truly deserve our reflection.

You won’t be able to predict your emotional response. 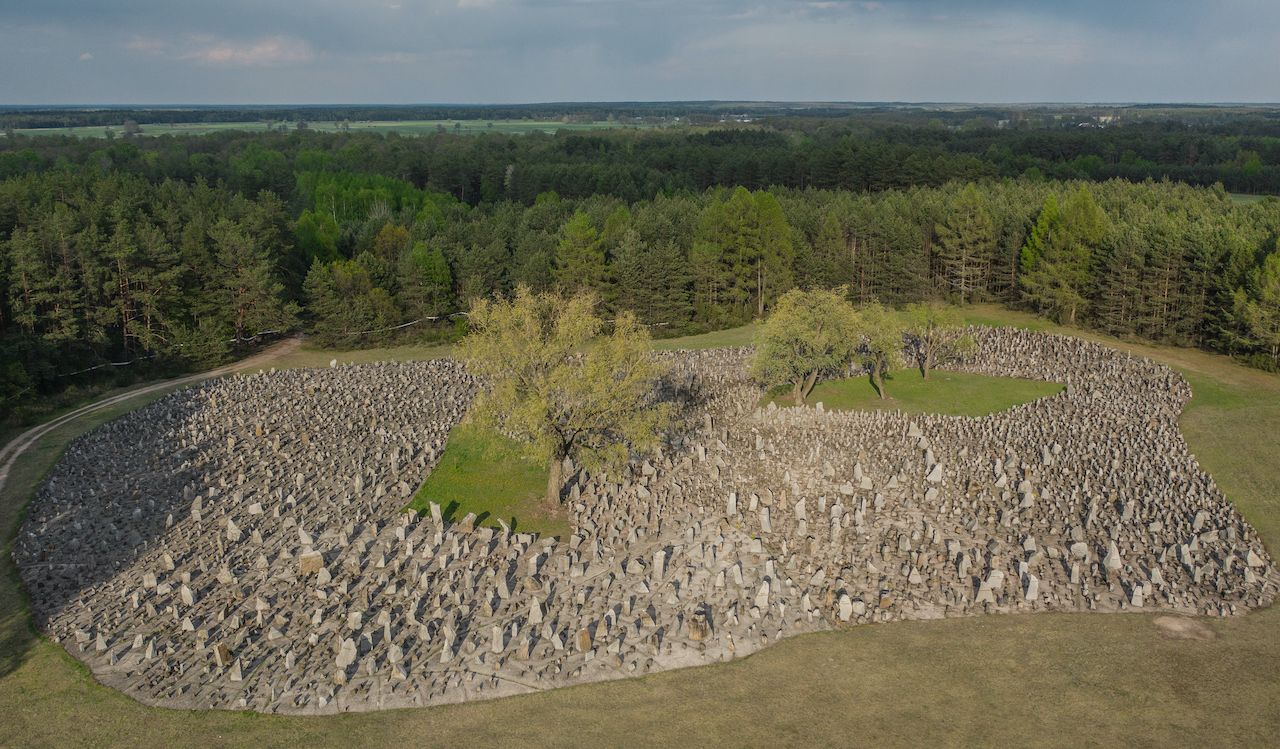 We finally came to an opening in the treeline and rounded the corner into a vast field. The clearing was filled with thousands of little stones, stretching almost past the limits of my sight. They sloped up a small hill crowned by a single massive monument engraved with a menorah. I didn’t know for sure what the stones meant, but I had a pretty good idea. They were symbolic gravestones, representing the hundreds of thousands killed at Treblinka, and the big one — I later found out — stood on the site of the gas chamber itself.

Visiting a concentration camp means signing up for an emotional experience. That’s a given. But exactly how that emotion will hit is entirely unpredictable.

Taff Simon of Dark History Tours, who regularly guides visitors through the Dachau concentration camp, observed a stoic young visitor who, before arriving at the camp, didn’t seem particularly engaged or interested.

“We came to the gas chamber area, with the big ash graves and the memorials,” Simon said. “He’s very thoughtful by the look on his face and asks, ‘When did Hitler know the war was lost?’ [Which is a] very good question. I replied when Stalingrad fell in early 1943.”

Simon continued, “This young man’s face just folded and he sobbed out ‘1943? He knew in 1943…but he just kept killing my people…another two years…he killed them…’ He was really sobbing…I see tears all the time — some hidden, some not — but this was something else.”

My friend, who was not Jewish, had no Jewish relatives, and no personal connection to anyone in the Holocaust, tiptoed through the stones like they were fragile artifacts. I could tell he was shaken. I didn’t learn the exact numbers until later — there were 17,000 stones, representing between 700,000 and 900,000 killed — but the sheer volume of them, and the sinister crime they represented, was staggering.

Anyone who has studied the Holocaust in school understands on an intellectual level the tragedy of what happened in the concentration camps. But until you visit one, the camps are just a cold, distant idea. The foundations of old buildings, tombstones of the dead, and train tracks that have fallen into disuse. Being there makes it real.

“So…this is where they killed them?” my friend said, in clear disbelief.

I wanted to answer him, to ask him what he thought of the place, or at least share my own thoughts — but words of any kind at that moment just seemed empty. I didn’t say anything.

Even Simon, a professional guide with hours of training under his belt, struggled greatly with the camp’s visceral impact. Though Simon “had managed to switch the horror off,” and compartmentalize his professional duties and the camp’s disturbing effect, he soon began to have recurring nightmares.

“The last three times it happened I was being dragged out after being beaten, then stood up against a wall and shot,” he said. “I’d wake with an absolute start, pulse racing.”

He took the dreams as a sign that he was spending too much time in the camp, and cut his number of weekly tours in half.

Going to Treblinka isn’t like any other tourist attraction. Even for trained guides, the experience isn’t easily consumed, digested, or regurgitated to friends and family. You can’t predict what it will be like from pictures and movies, and no two people will process it in quite the same way. And that’s what makes it special.

After the memorial and graveyard, we walked further into the forest to another clearing where the barracks had been. This is where prisoners slept while they awaited extermination. The buildings themselves are gone, but the foundations remain. Standing inside the stone foundations, envisioning the terror-stricken souls who once inhabited the very same space, was even more unsettling than the cemetery. The vast field of symbolic gravestones shed light on the Holocaust’s scale. The barracks made it chillingly intimate.

The collection of demolished dwellings took race, ethnicity, and religion out of the equation. Huddled together in darkness, the prisoners were not Jews, gypsies, communists, homosexuals, and the disabled; they were human victims of an inhuman act, whose memory was far too recent for comfort.

Arja J., a guide at the Sachsenhausen concentration camp in Oranienburg, Germany, always emphasizes to her tour groups the Holocaust’s universality. Hate, intolerance, and persecution is “in all of us,” she says, “and we have to be hyper vigilant that it will not happen again. Manipulation of the masses is a very current event…and so the only way to prevent any similar events is for people to understand the structure and the mechanics behind [these atrocities].”

Standing on that foundation, I was no longer a Jewish-American citizen standing with an Italian-American citizen. We were just two people, not unlike those who once occupied the barracks; we were just lucky enough to be standing there in 2019 rather than 1942.

Many popular attractions awe visitors through the power of addition — intricate architecture, a high-flying performance, stunning natural beauty. Concentration camps awe through subtraction. Themselves austere and basic, they have a way of stripping away your extraneous concerns and prejudices. They force you to shed your preexisting concept of identity, and smack you in the face with a sobering sense of humanity.

“One of the scariest things about Dachau,” said Simon, “is that a lot of what happened there seems very contemporary. Dachau and places like it force us to look at ourselves, and as such, are extremely relevant to us today — whether we have lost family in the Holocaust, have an interest in history, or some other reason to visit. They inform us about the human condition.”

On our way to return the rental car in Warsaw, we played the “so what was your favorite part of the trip?” game. I was sure his answer would be partying in Tallinn, or taking night sky photography in Latvia.

“Favorite probably isn’t the right word,” he said. “But it was definitely Treblinka. Is that weird?”

Culture7 Most Fascinating Dark Tourism Destinations Around the World
Tagged
Narrative Travel Poland
What did you think of this story?
Meh
Good
Awesome