Amsterdam has its undeniable charms and attractions, but it’s not the Netherlands. After you’ve gotten lost in the Dutch capital’s historic canal ring, toured its world-renowned museums, and absorbed its Old World legacy, there’s much more to see beyond city borders. From iconic windmills to day-glo tulip fields and lively beach resorts, a world far removed from Amsterdam’s raw energy emerges in these great day trips — all within two hours of the city by bike or public transit. 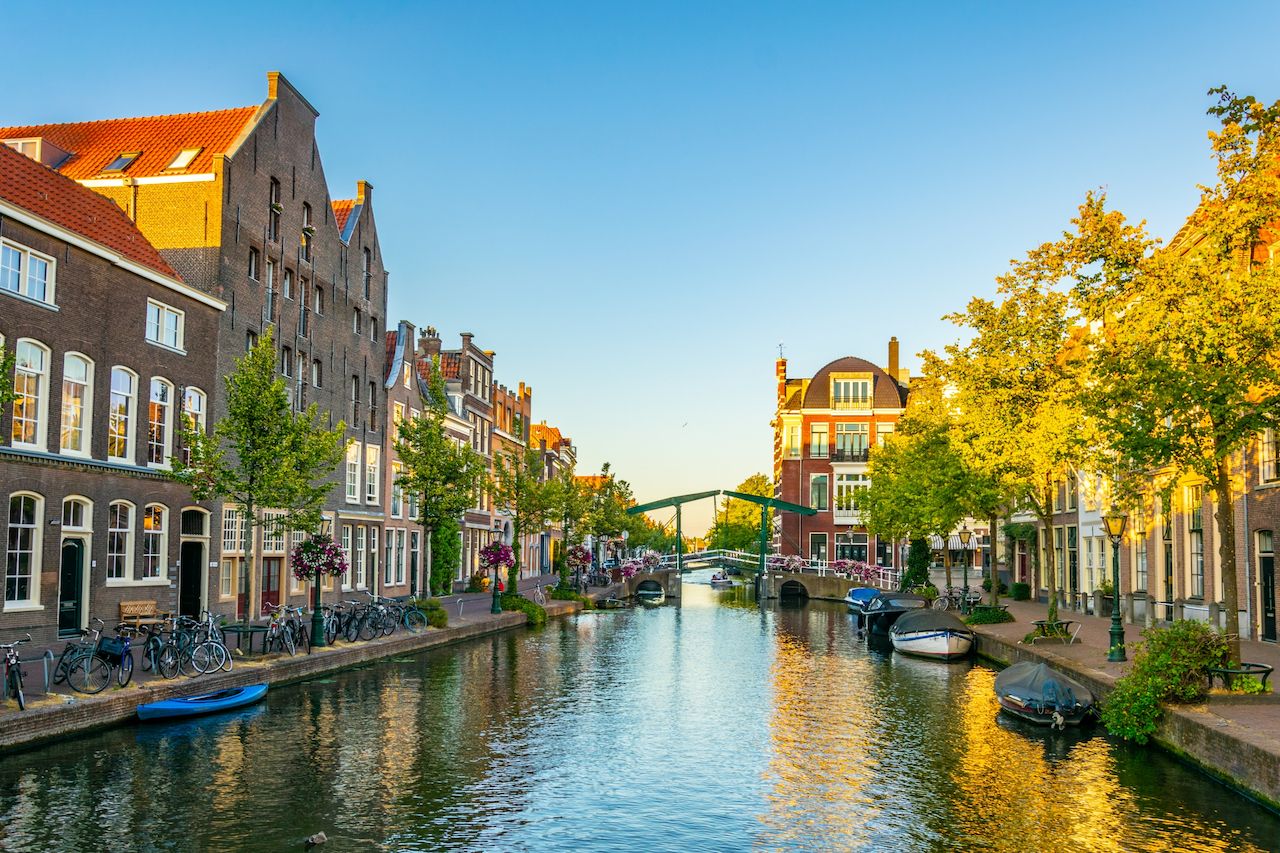 Leiden — The birthplace of Rembrandt and home to Holland’s oldest university — founded in 1575 by Prince William of Orange — Leiden is situated in the heart of the tulip-growing district, with a bucolic setting on the Rhine that could pass for a scene from a Vermeer painting. The town’s botanic garden features the world’s oldest academic observatory, once directed by botanist Carolus Clusius, known for cultivating a dizzying array of tulip species that fanned Dutch tulip mania. A free Leidse Loper app highlights 24 historic sites on a self-paced walking tour.

For panoramic views, climb to the top of the De Valk Windmill Museum, a landmark that’s stood in Leiden since 1743. Inside, a working waterwheel and early-20th-century living spaces offer a peek into past lifestyles. Visit on a Wednesday or Saturday to browse some 200 stalls of an outdoor market, where vendors proffer cheese, bike parts, flowers, and other typical Dutch products. From Amsterdam Central take the Intercity train to Leiden Central. The journey takes less than 40 minutes. 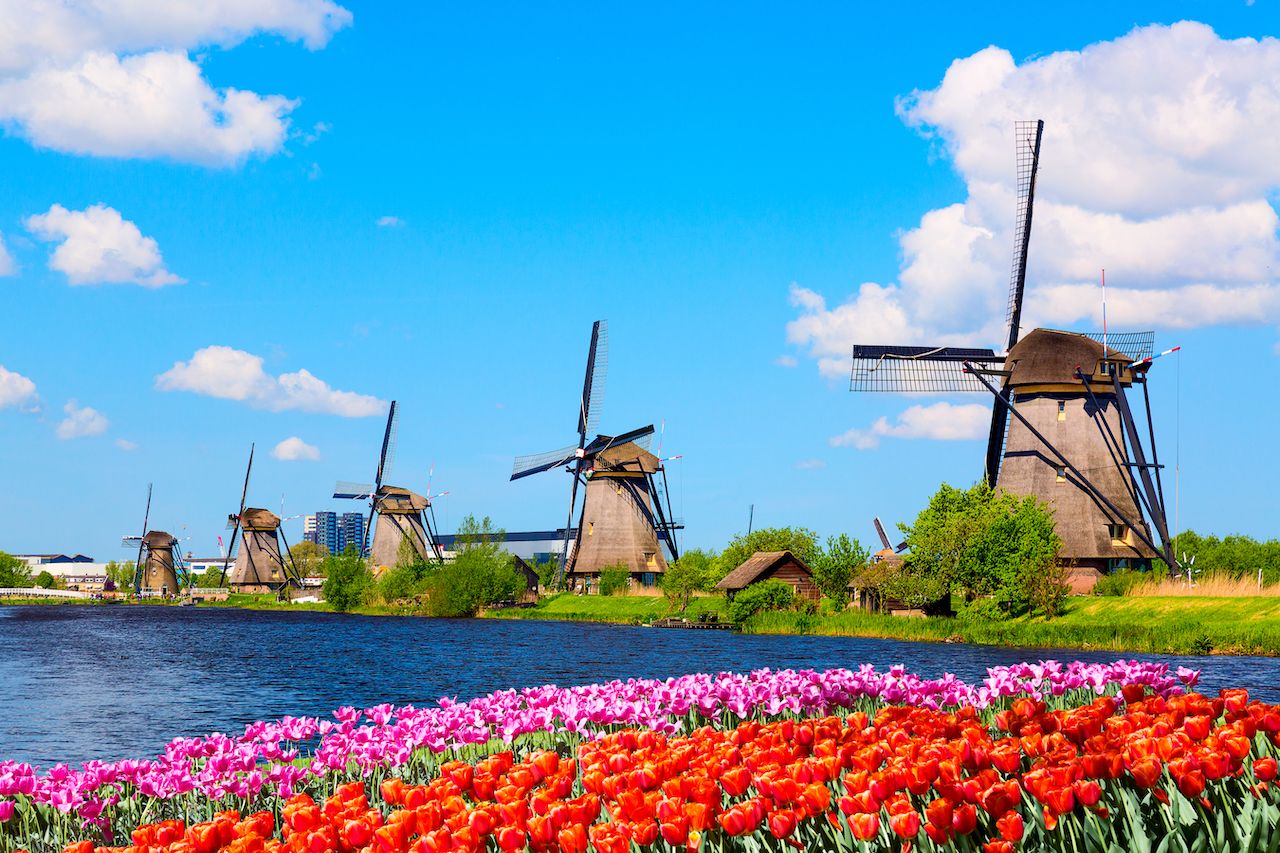 Kinderdijk — Dutchies will tell you that “God made the world, but the Dutch created the Netherlands.” Evidence is at this UNESCO World Heritage site where Holland’s largest collection of working windmills testifies to a 1,000-year battle against the sea. As a survival bonus, it also acts as an emergency backup system for flooding. An 18th-century footbridge leads into a primeval landscape punctuated with grazing cows, flying birds, creeping weasels, and crawling amphibians. For a more human perspective, visit two museum windmills providing a glimpse of life in an earlier era.

Tour boats offer views of the windmills and surrounding polder landscape. The half-hour Hopper tour operates year-round, except from January to mid-February, allowing passengers to hop on and off at different points. From April to October, the Cruiser makes a loop around the windmills. 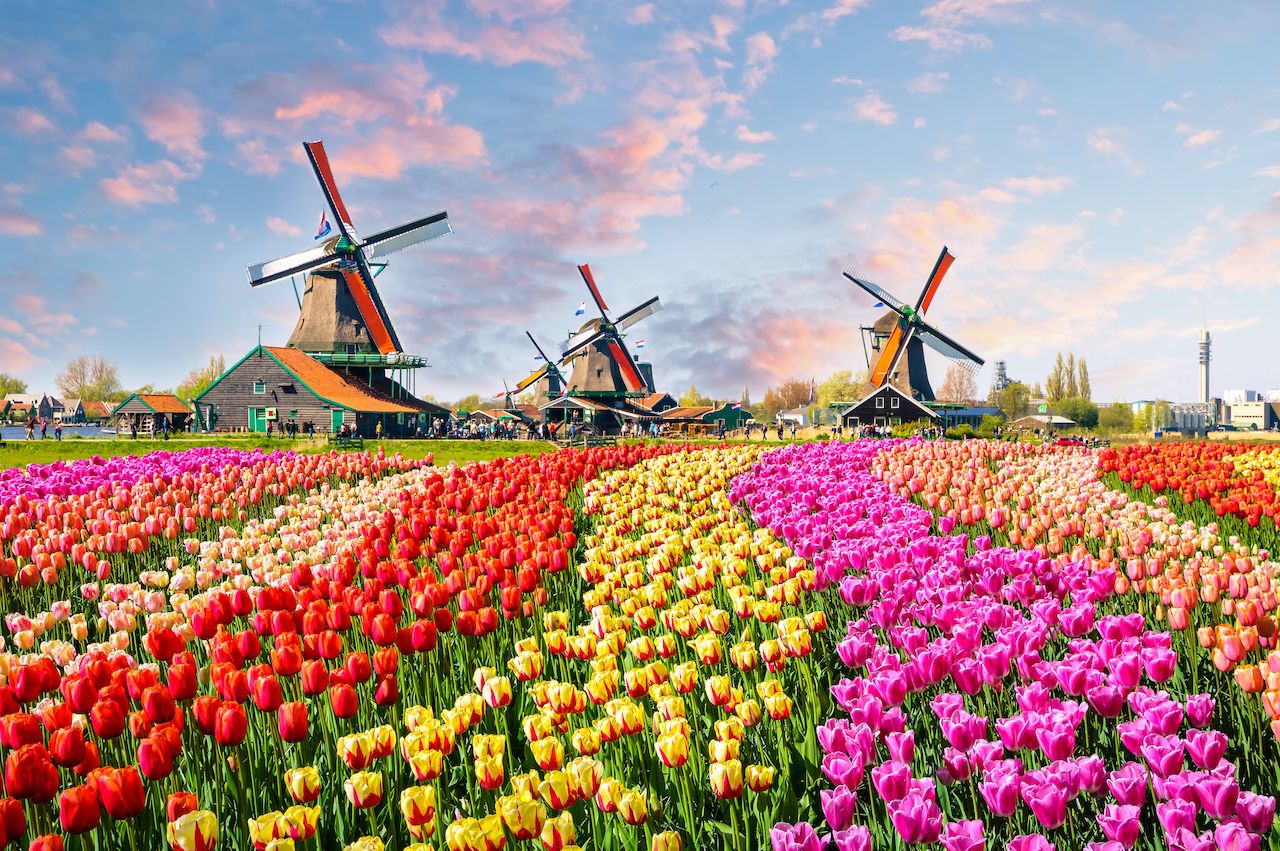 Zaanse Schans — Sure, it’s touristy. Yes, it’s filled with kitschy stereotypes. But this replica of a Zaanse village is worth visiting just to see how wooden clogs, pewter jewelry, artisanal cheese, and Dutch gin (jenever) were made in the 17th and18th centuries. The free outdoor museum was created by relocating houses, windmills, storehouses, and barns to showcase the traditional crafts and lifestyles of people who lived in Holland long before sex, drugs, and rock ‘n’ roll entered the picture.

From late March to September, boat tours offer views of ancient houses and windmills. Bikes can be rented at Zaanse Schans Bike Rent. A cycling path leads past merchants’ mansions in Zaandijk, the pretty village of Haaldersbroek, and Zaandam city center. From Amsterdam Central, take the Sprinter to Koog-Zaandijk, a 20-minute trip. Follow the signs to Zaanse Schans, a roughly one-mile walk. 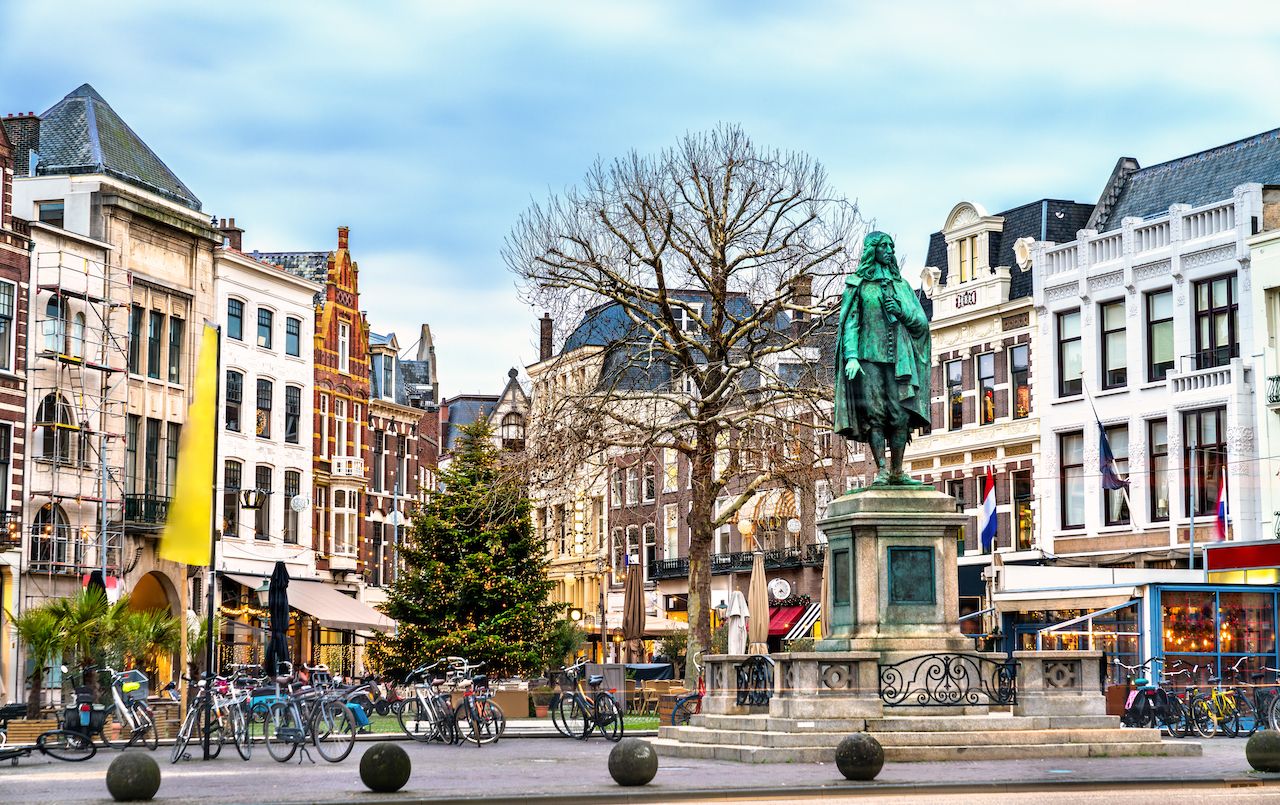 The Hague — Amsterdammers claim that money is earned in Rotterdam, divided in The Hague, and spent in Amsterdam. The Netherlands’ third-largest city, after Amsterdam and Rotterdam, and its seat of government is home to 150 international courts, foreign embassies, and international organizations, including the International Court of Justice and International Criminal Court. It’s among six cities that host the United Nations, along with New York, Vienna, Geneva, Tokyo, and Nairobi.

Vermeer’s Girl with a Pearl Earring hangs in the Mauritshuis, one of The Hague’s many museums. Also worth visiting is the Japanese Garden in Clingendael Park, open just eight weeks a year. From Amsterdam Central take the Intercity train to Den Haag. The trip takes just under an hour. 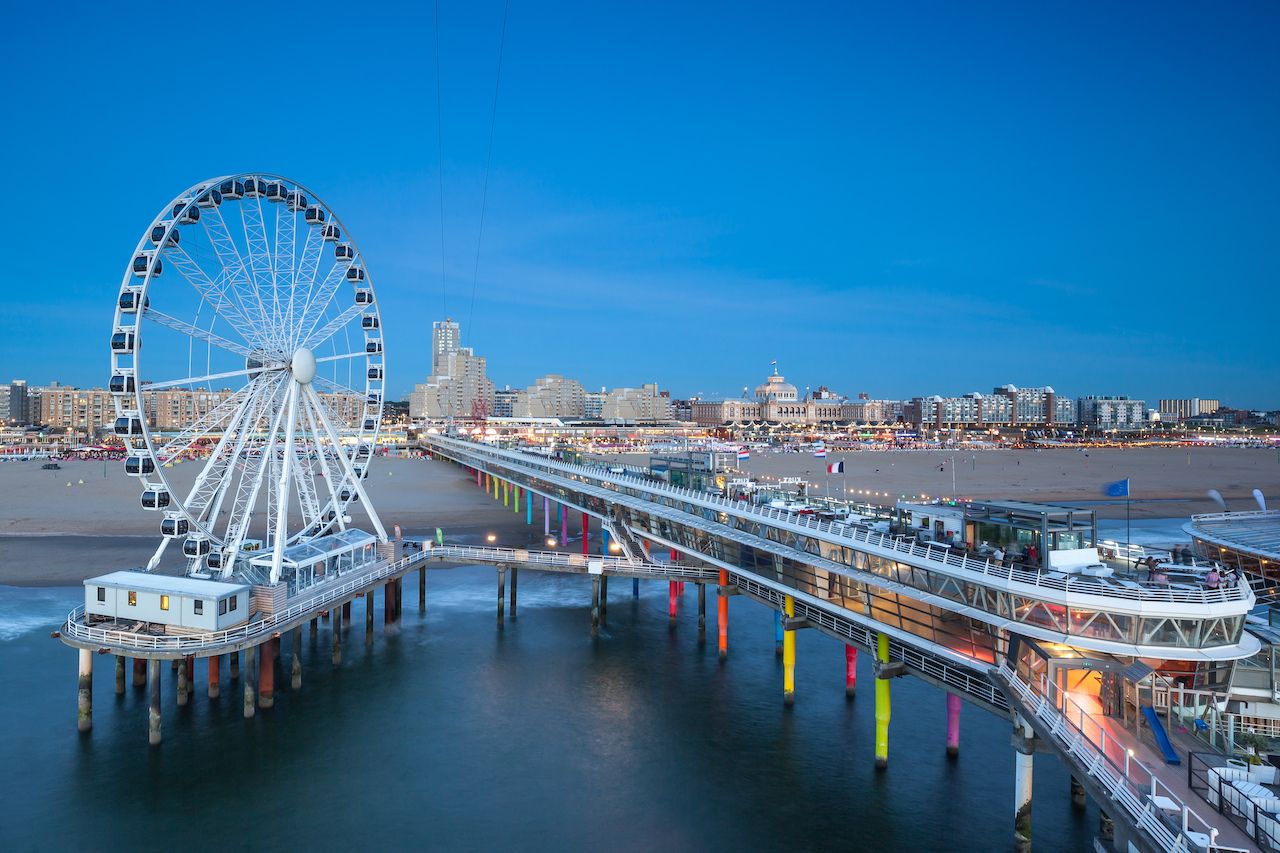 Scheveningen — This lively beach resort in The Hague’s wealthy northern district features a sandy beach, colorful esplanade, and the Scheveningen lighthouse. To add to the fun, there’s a Sea Life aquarium, Steigenberger Kurhaus music theater, Scheveningen Museum, and a casino. Trendy clubs, restaurants, surf schools, and other water sports options line the wide Noorderstrand, which means North Beach. Giant sculptures add a whimsical touch while numerous bars and eating establishments provide spots to grab a drink or meal while watching the action in the harbor.

You can bungee jump from Scheveningen Pier in summer. For vicarious thrills, a webcam captures the action live and lets you keep an eye on the waves in this surfing hotspot. From Amsterdam Central, take the Intercity train to Den Haag Central. Transfer to Bus #9 to Scheveningen Noorderstrand. The trip should take about one-and-a-half hours. 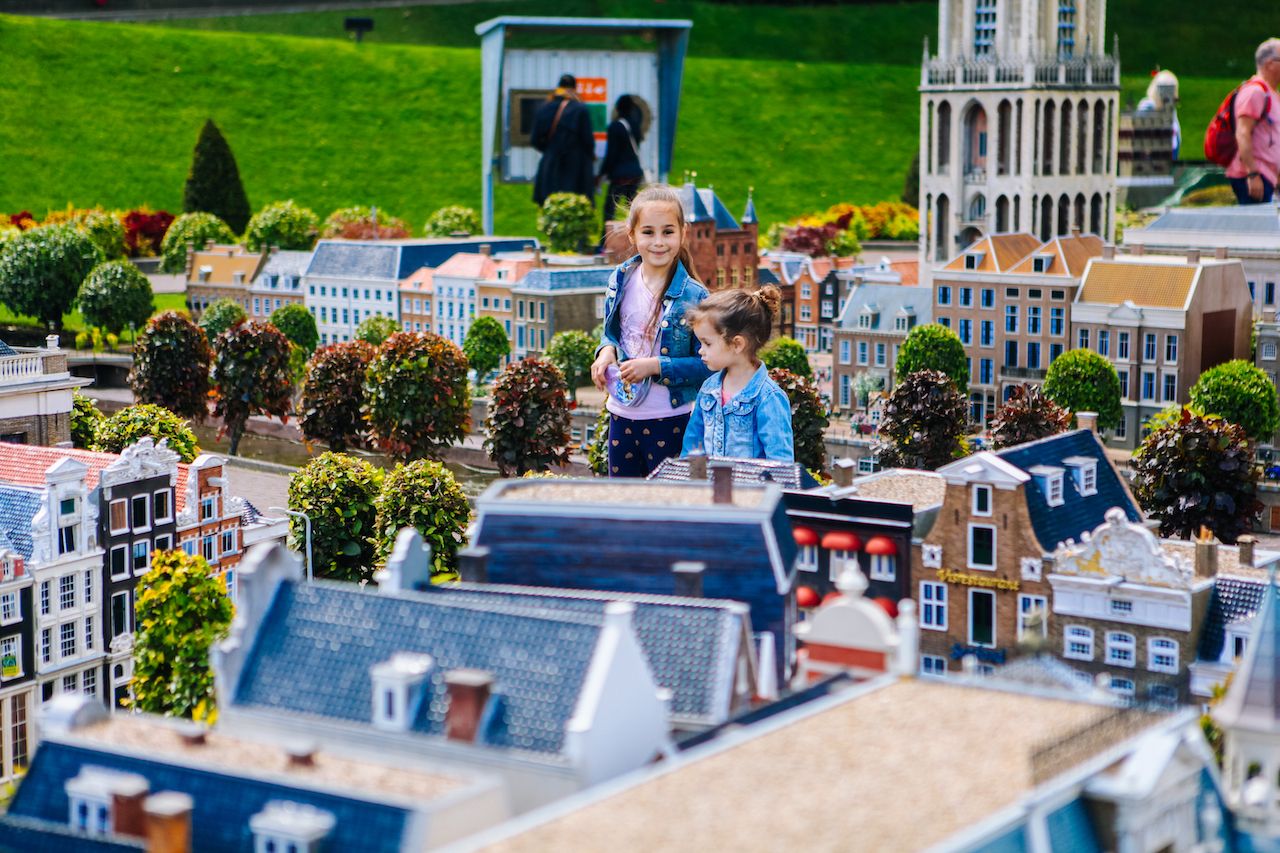 Madurodam — Windmills turn, airplanes land, trains run, and boats float in interactive exhibits that tell the story behind Dutchies’ battle against water at this mini-theme park in The Hague. Like an outdoor history lesson, the miniature city replicates historic Dutch towns, ports, canals, roads, and monuments on a 1/25 scale. Mini versions of Schiphol, Rotterdam Port, Dam Square, and other landmarks of the Netherlands add a geographic perspective. From Amsterdam Central, take the Intercity train to Den Haag Central. Transfer to Bus #9 to Madurodam. The trip should take just over an hour. 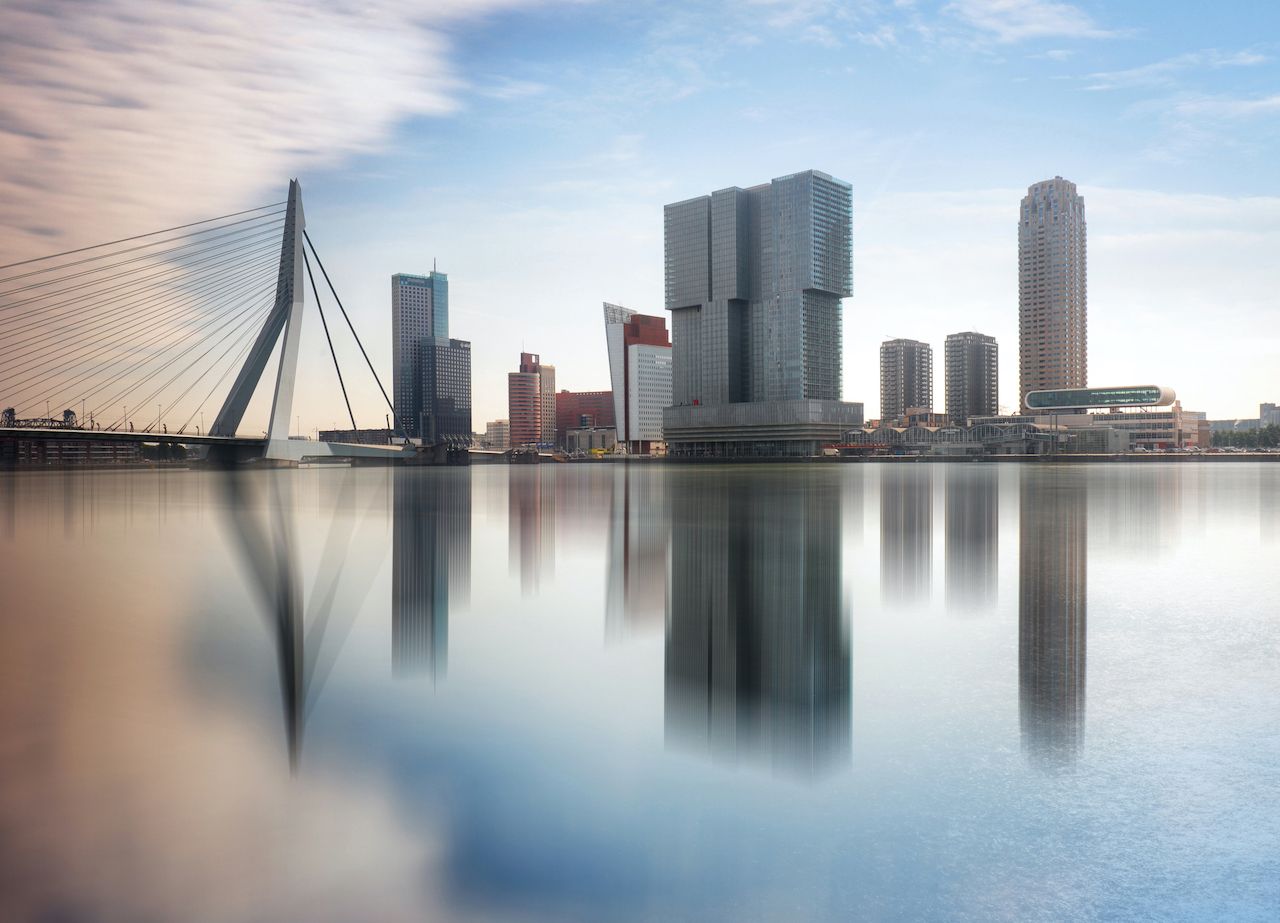 Rotterdam — During WWII, Nazi bombs flattened Rotterdam. The modern city built on the ashes is now Europe’s busiest port, known for futuristic architecture and such inspired initiatives as inner-city canal surfing. The swooping Erasmus Bridge, dubbed de Zwann, or “the swan,” is a city icon, as is the Markthal, an indoor market that made international headlines when it opened in 2014 for its striking inverted U-shape and ceiling covered with what’s been called the “largest artwork in the world,” depicting fruits and vegetables on an epic scale.

The Maritime Museum reveals tales of ancient mariners during Rotterdam’s glory days in the era of Dutch sea trade. Those lured to America by the promise of a better life may have worshipped at the Pilgrim Fathers Church before shipping off to unknown shores. For city views, zoom up to Euromast’s observation deck in an elevator that makes the trip in 30 seconds. Gain insight into the city with UrbanGuides, offering walking and cycling tours covering Rotterdam’s culture and history. From Amsterdam Central take the Intercity train to Rotterdam Central, a 70-minute trip.

The Maritime Museum reveals tales of ancient mariners during Rotterdam’s glory days in the era of Dutch sea trade. Those lured to America by the promise of a better life may have worshipped at the Pilgrim Fathers Church before shipping off to unknown shores. For city views, zoom up to Euromast’s observation deck in an elevator that makes the trip in 30 seconds. Gain insight into the city with UrbanGuides, offering walking and cycling tours covering Rotterdam’s culture and history. From Amsterdam Central take the Intercity train to Rotterdam Central, a 70-minute trip. 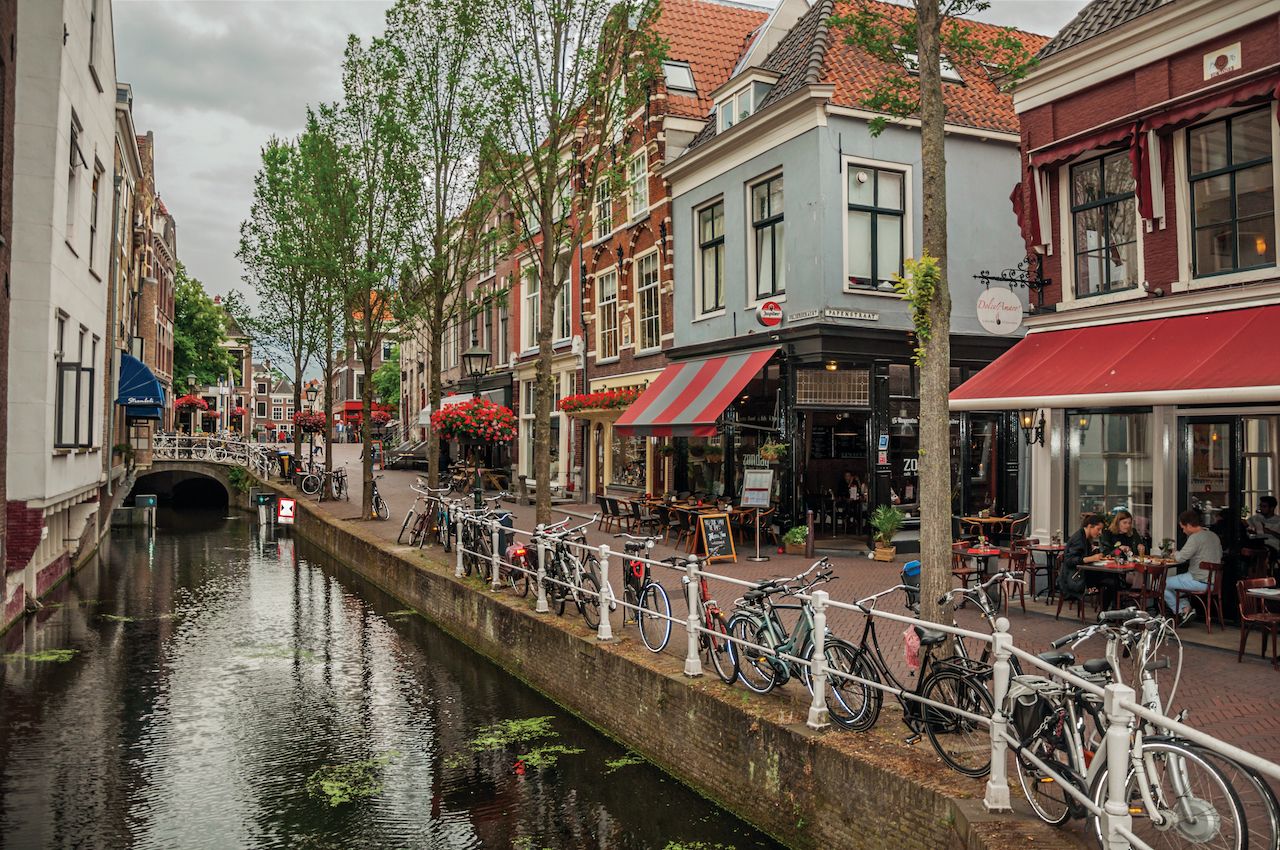 Delft — There’s more to this small town than blue and white pottery. With many of Amsterdam’s charms — cobblestone streets, pretty canals, and historic buildings — but none its touristy buzz, it’s a serene escape from urban bustle. Renowned painter Vermeer is buried in the Oude Kerk while the Nieuwe Kerk flanks the Main Square. Even if you’re not into hand-painted ceramics, a stop at De Porceleyne Fles, a 15-minute walk from the town center, is worthwhile to see the intricate process involved in creating Delftware.

For local history, visit Museum Het Prinsenhof, once a 15th-century convent. Dig deeper into 17th-century Delft at The Vermeer Center, focused on the life, work, and city of native son Johannes Vermeer. The Vermeer Combi-Ticket offers access to the Vermeer Centrum Delft (including coffee and cake), Museum Het Prinsenhof, the New Church, and the Old Church. As an added bonus, you get the Vermeer Walk, which leads past Vermeer sites in the city. Trains leave about every half hour from Amsterdam Central and take an hour to reach Delft.