With more than 300 annual festivals, Amsterdam is always celebrating something. From King’s Day in late April to summer music festivals and the year-end Amsterdam Light Festival, there’s something for everyone. Whether your passion is dance, theater, beer, tulips, film, history, horticulture, or just plain fun, you’re bound to find a festival that showcases the best of it in the Netherlands. Here are just a few of the special events that attract both Dutch and international revelers throughout the year to Amsterdam. 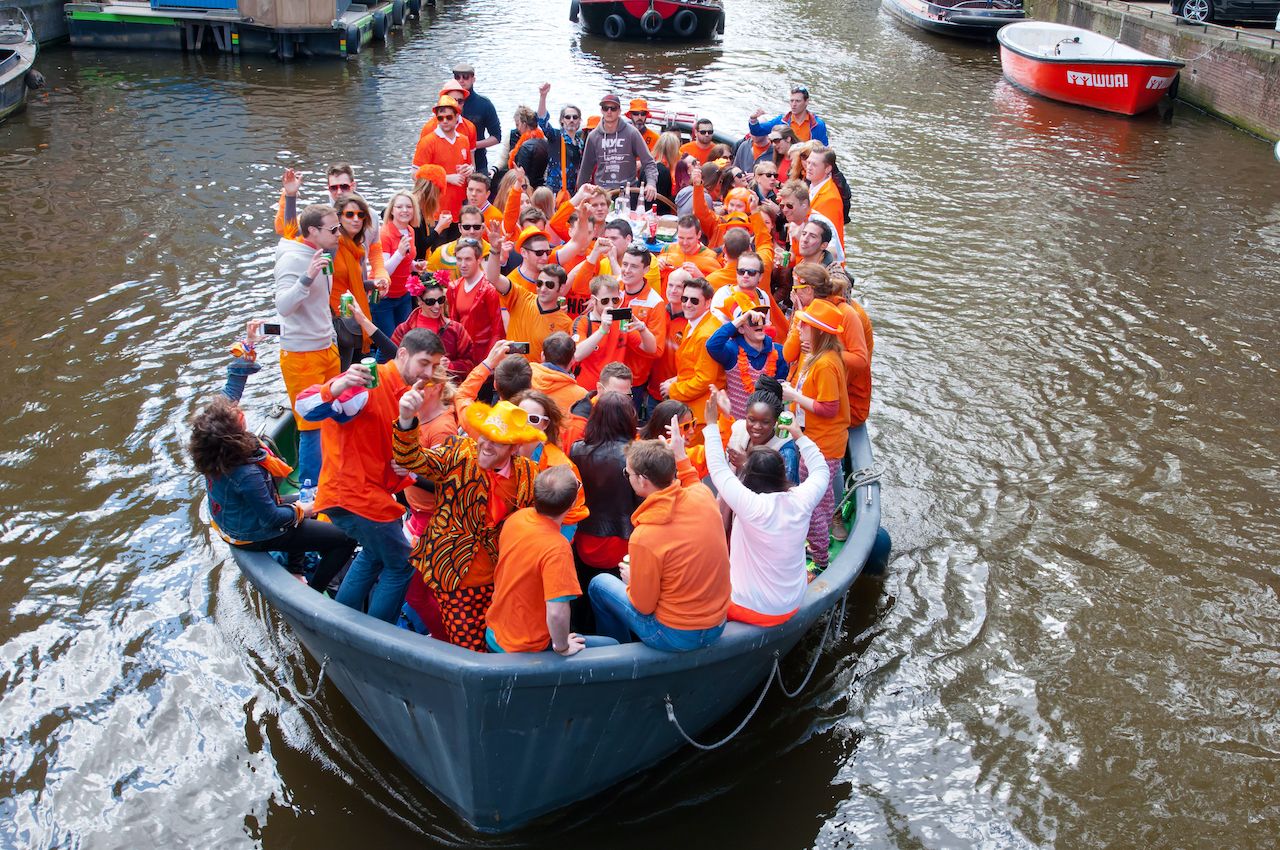 King’s Day — Little can prepare you for the orange-tinged madness of King’s Day, or Koningsdag, the national holiday that gives the Dutch an excuse to party hard for over 24 hours. In Amsterdam alone, over a million revelers spill onto streets and canals, ostensibly to celebrate King Willem-Alexander’s birthday on April 27 (if his birthday lands on a Sunday, the holiday is celebrated on April 26). The fun begins the night before on King’s Night (Koningsnacht) when bars and public squares overflow with people. The next morning, the city turns into a giant flea market, or vrijmarkt, which is the only day anyone can sell anything on the street tax-free. As the afternoon winds down, the party ramps up with live music, street vendors, pop-up bars, and dancing in the streets. 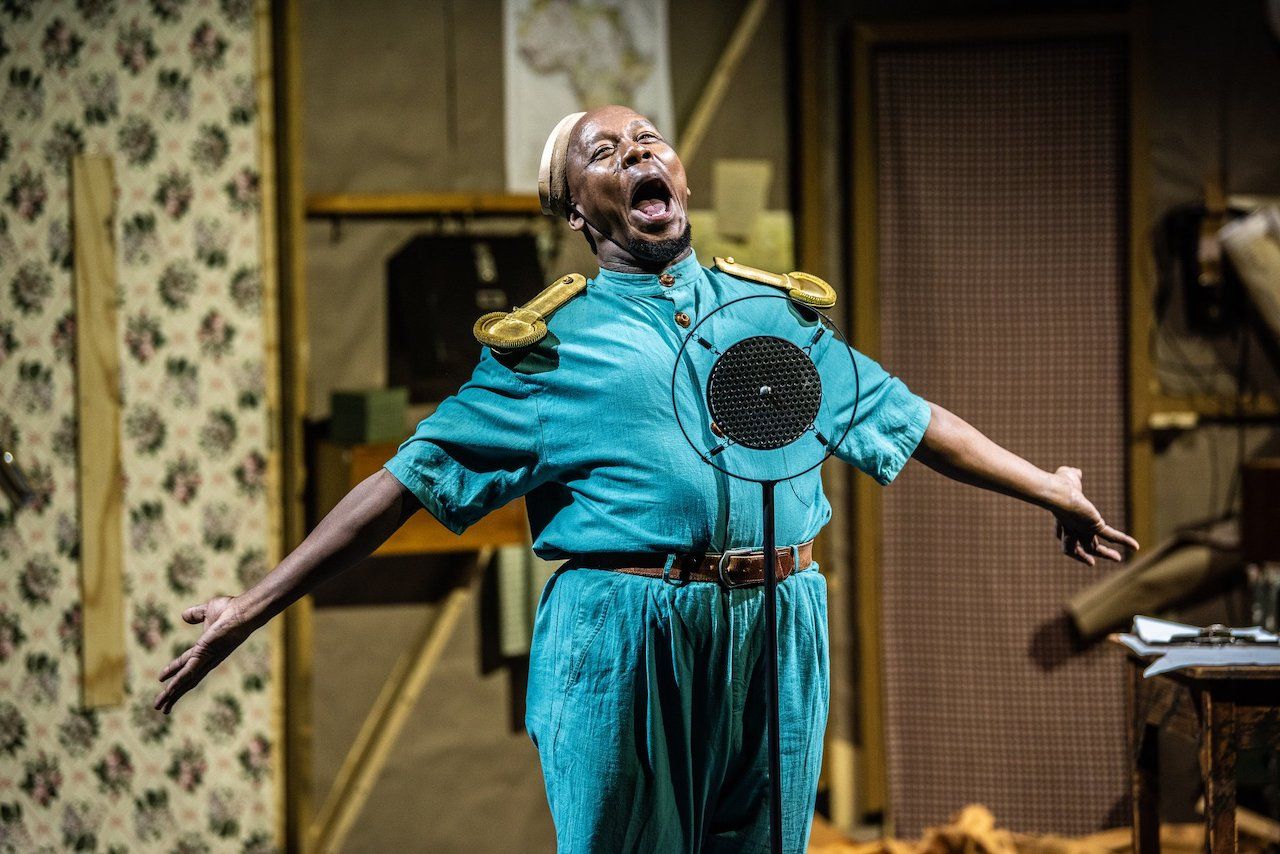 Holland Festival — Since 1947, the Netherlands’ largest and oldest performing arts festival has showcased a trend-setting roster of theater, dance, music, film, literature, and visual arts every June. The annual event features some of the world’s top artists and performers, as well as lesser-known talents. Both contemporary work and classical pieces are presented in venues throughout the city, including Amsterdam’s renowned Concertgebouw and Muziekgebouw. 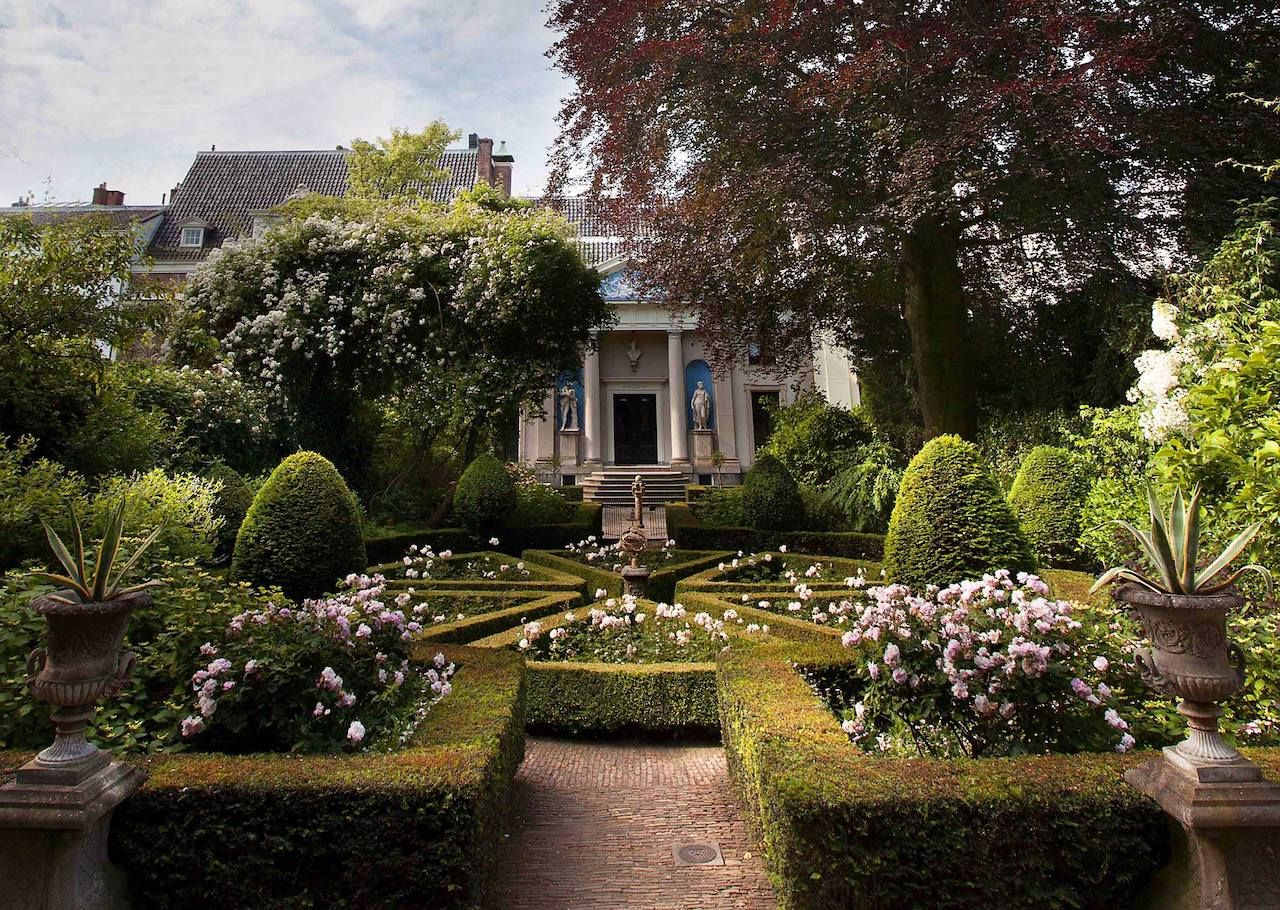 Open Garden Days — The stately façades of Amsterdam’s canal mansions hide some of the city’s best-kept secrets: manicured gardens ornamented with art and sculptures. Few are accessible to visitors for most of the year, but some 30 belonging to both private individuals and institutions open their doors to the public on the third weekend every June for Open Tuinen Dagen. Presented by Museum Van Loon, the event includes both classic and contemporary gardens, all meticulously maintained with hedges, ponds, and fountains. 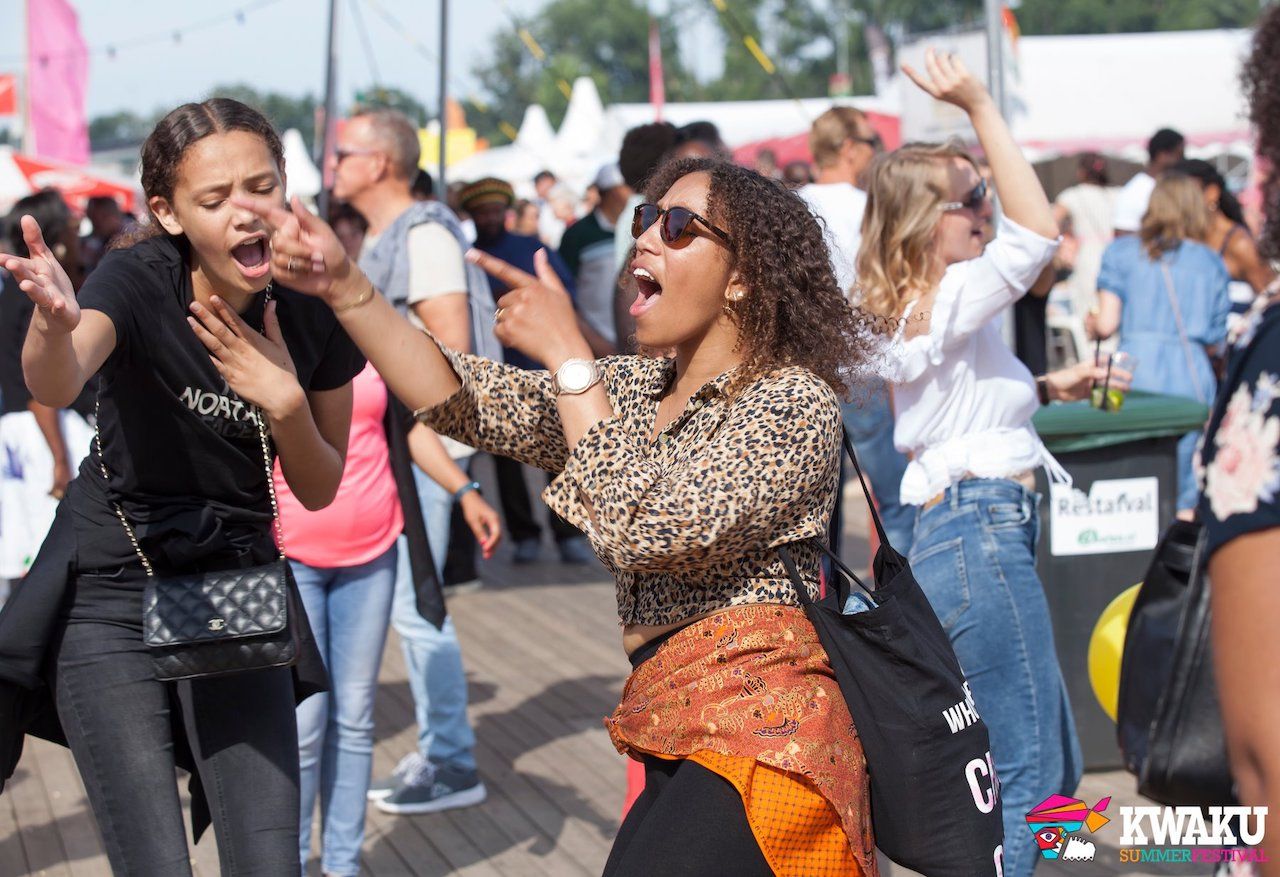 Kwaku Summer Festival — Every July, some 300,000 visitors descend on Amsterdam’s Nelson Mandela Park for four weekends of multicultural fun. Originally established to celebrate the abolition of slavery in Suriname and the Dutch Antilles on July 1, 1863, Kwaku is one of the biggest events of the year. Highlights include live music, dance workshops, family-friendly entertainment, a Caribbean market, and stalls proffering everything from ribs dripping in Surinamese sauce to spicy Korean tacos and delicacies from the Middle East and Africa. Football — the Netherlands’ most popular sport — plays a major role in the celebration as teams of numerous nationalities and ages compete throughout the festival for the Kwaku Cup. 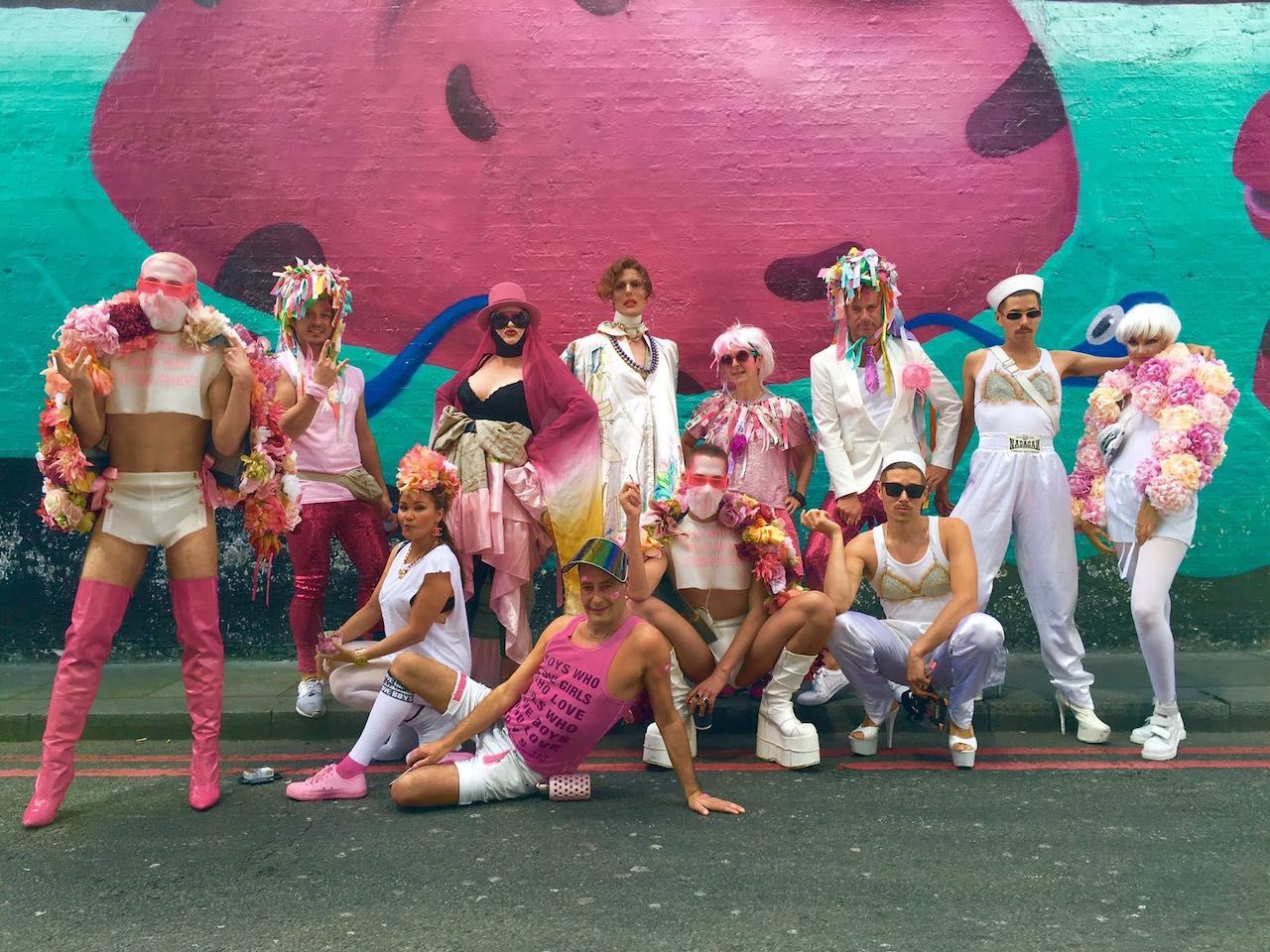 Milkshake — It’s all about respect, freedom, tolerance, and out-of-the-box thinking at this annual collaboration between Paradiso and AIR, two of the city’s hottest clubs. Top DJs, drag queens, and an eclectic line-up of musicians and performance artists appear on multiple stages at Amsterdam’s Westerpark for the summer festival that brings people of all sizes, shapes, ethnicities, and sexual persuasions together for a weekend of fun. 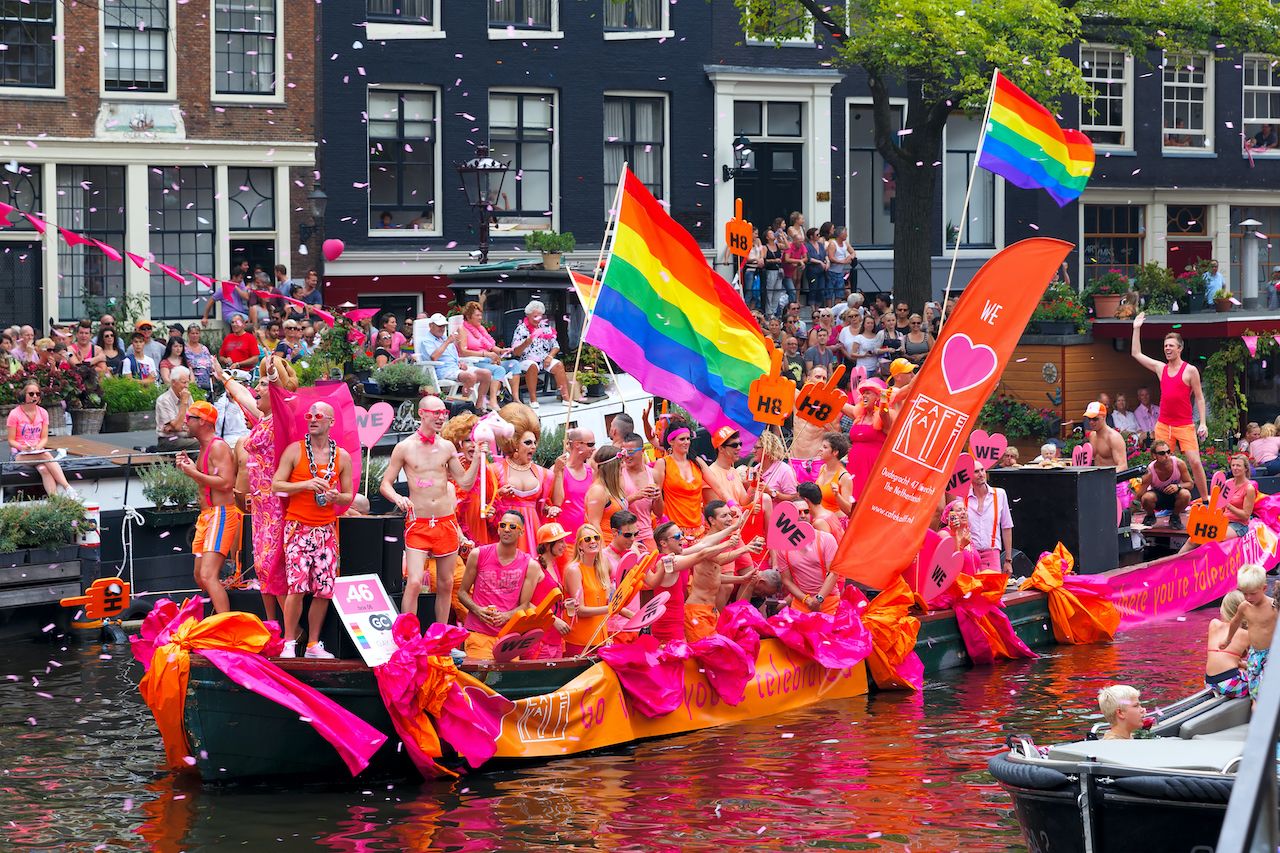 Pride Amsterdam — Europe’s most gay-friendly city celebrates its LGBTQ+ community with an intoxicating week of special events and street parties. The fun begins in late July when rainbow flags and balloons pop up throughout the city. It ramps up to the Drag Queen Olympics and culminates on the first weekend in August with a colorful canal parade featuring buff bods floating down the Prinsengracht on festooned watercraft. 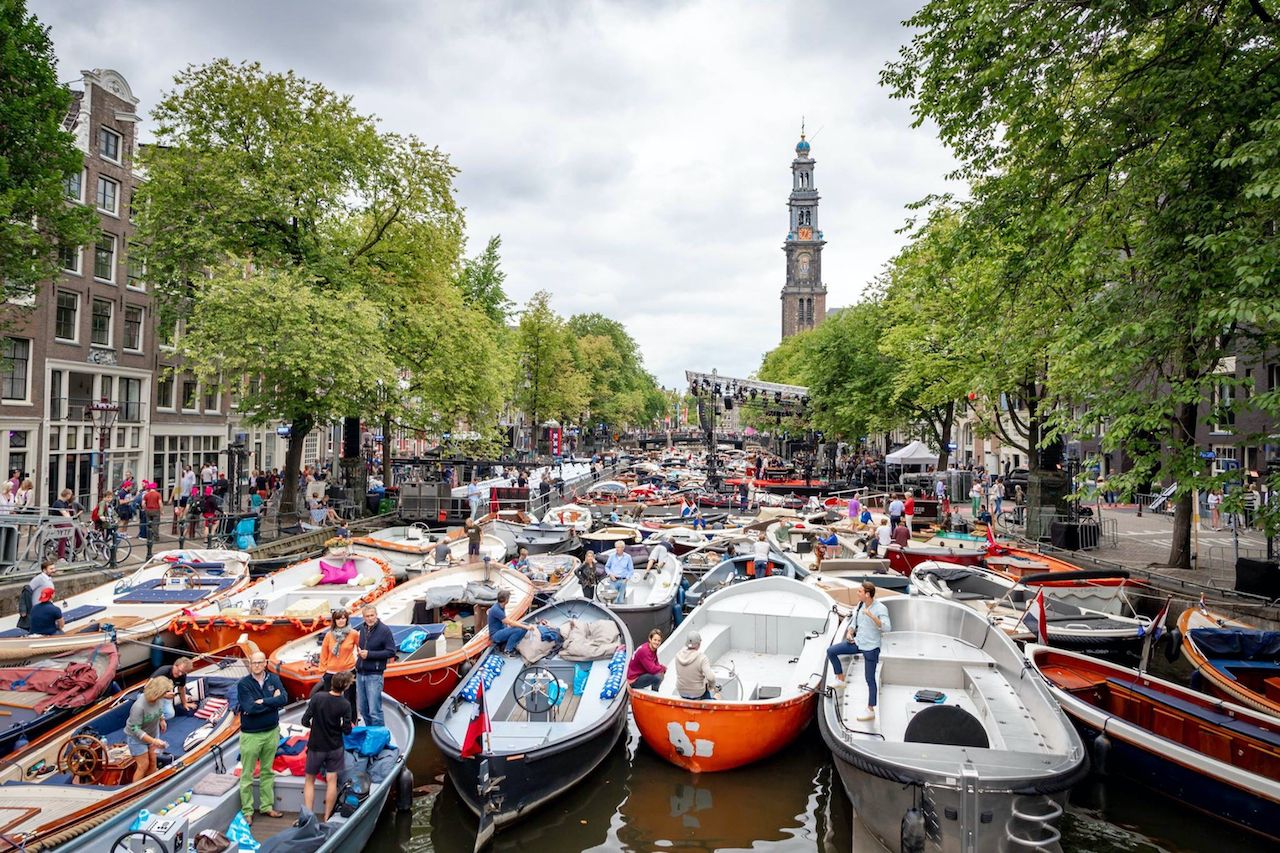 Grachtenfestival — Amsterdam’s devotion to arts and culture is evident in this 10-day festival, which brings live music to venues throughout the city. Since 1997, the celebration has drawn over 50,000 visitors annually to the Dutch capital who come for performances held on pontoons and boats, as well as in canal mansions, hotels, museums, and parks. The Prinsengracht Concert, a concluding highlight, draws thousands to Amsterdam’s 400-year-old canals where boaters parade, and people line bridges to enjoy the spectacle. 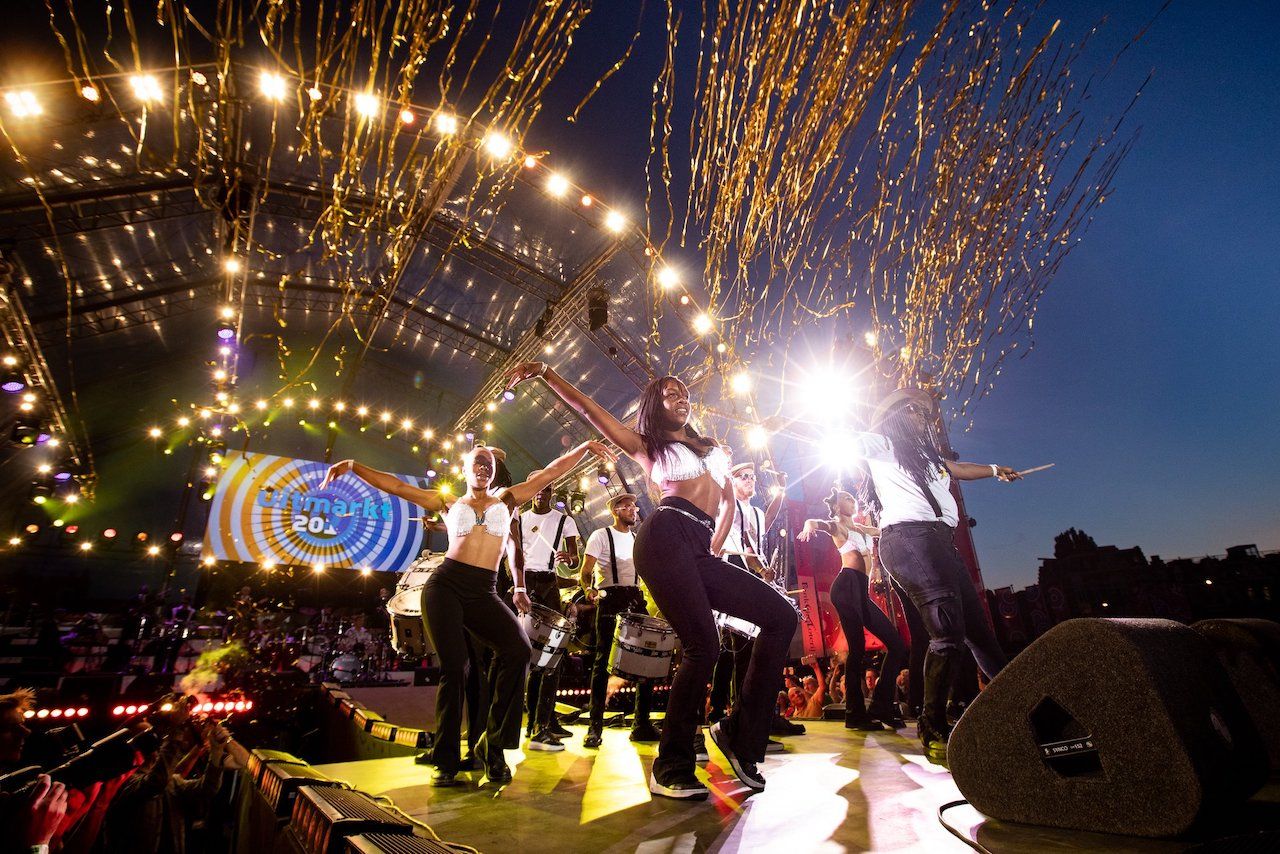 Uitmark — In late August, Uitmarkt ushers in Amsterdam’s cultural season with more than 300 performances showcasing the best of arts and culture in the Netherlands. The free festival attracts some 500,000 theater, music, book, and film lovers annually for shows ranging from classical ballet to hip-hop dance, dramatic readings, and jazz performances on 28 outdoor stages. 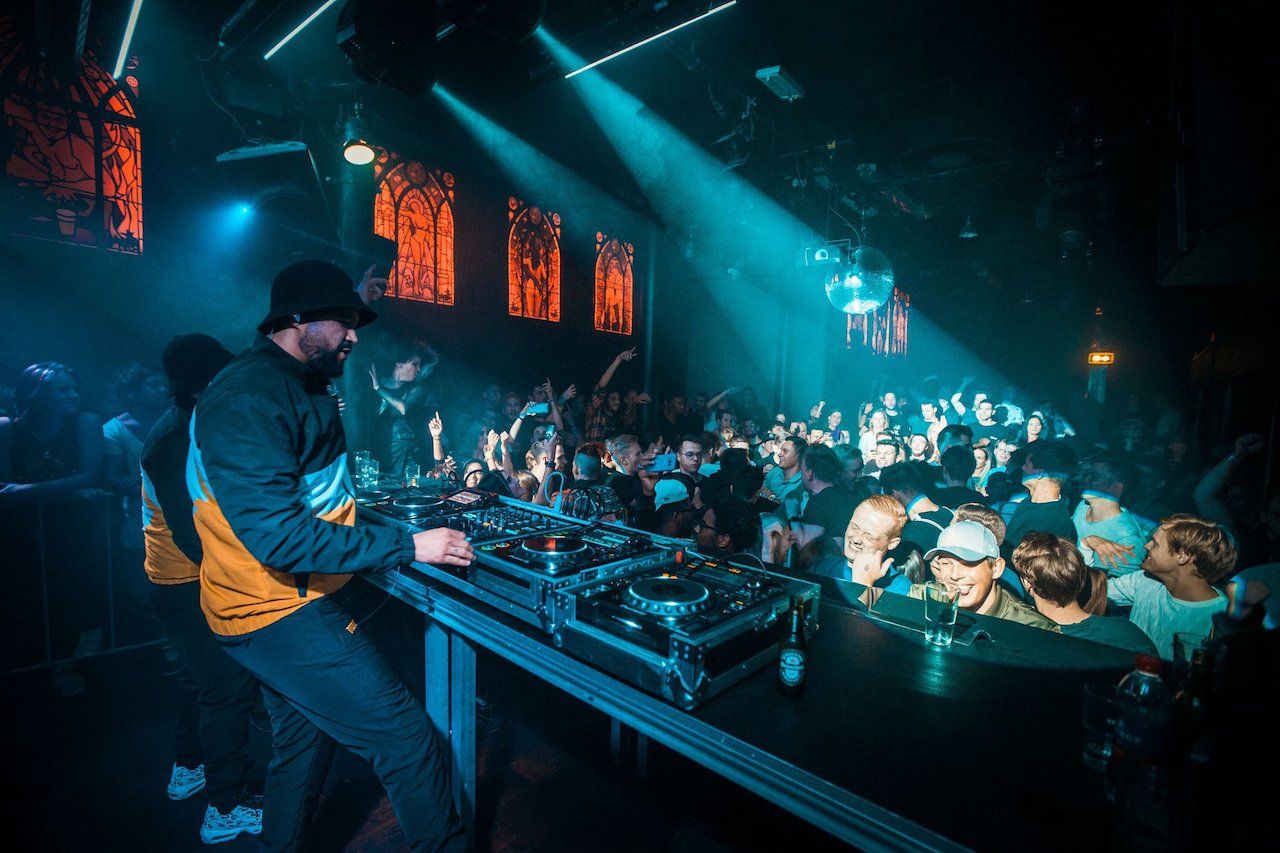 Amsterdam Dance Event — One of the Netherlands’ most anticipated music festivals is proof that electronic music is in the Dutch DNA. Popularly known as ADE, the annual event brings top international DJs to the Dutch capital in October. Upcoming talents from around the world also use the platform to showcase their talents at venues throughout the city. 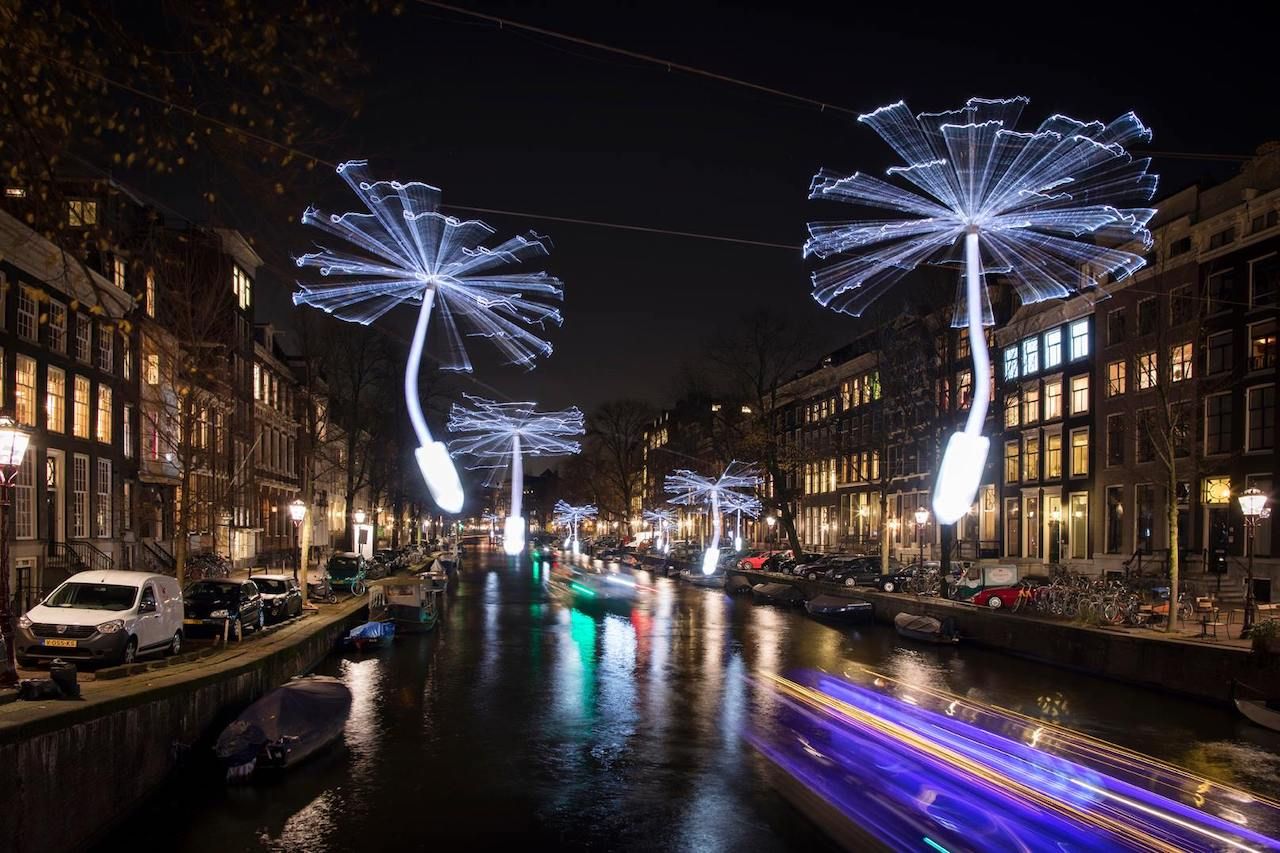 Amsterdam Light Festival — For more than 50 days, the Amsterdam Light Festival illuminates winter darkness with sparkling light sculptures and projections by Dutch and international artists. Set around historic landmarks and stretched across canals, the installations can be viewed via a canal boat or on a walking route through the city center during the year-end holiday season.