Amsterdam’s beating heart may be its historic center, and the area around Dam Square certainly warrants exploration, but the city’s soul extends to less-touristy neighborhoods on the fringes of the Grachtengordel (Canal Ring). For a more layered perspective of the Dutch capital, venture further afield to multicultural De Pijp, post-industrial Noord, the postcard-perfect Jordaan, and other neighborhoods often overlooked by visitors, where locals actually live, work, and play. 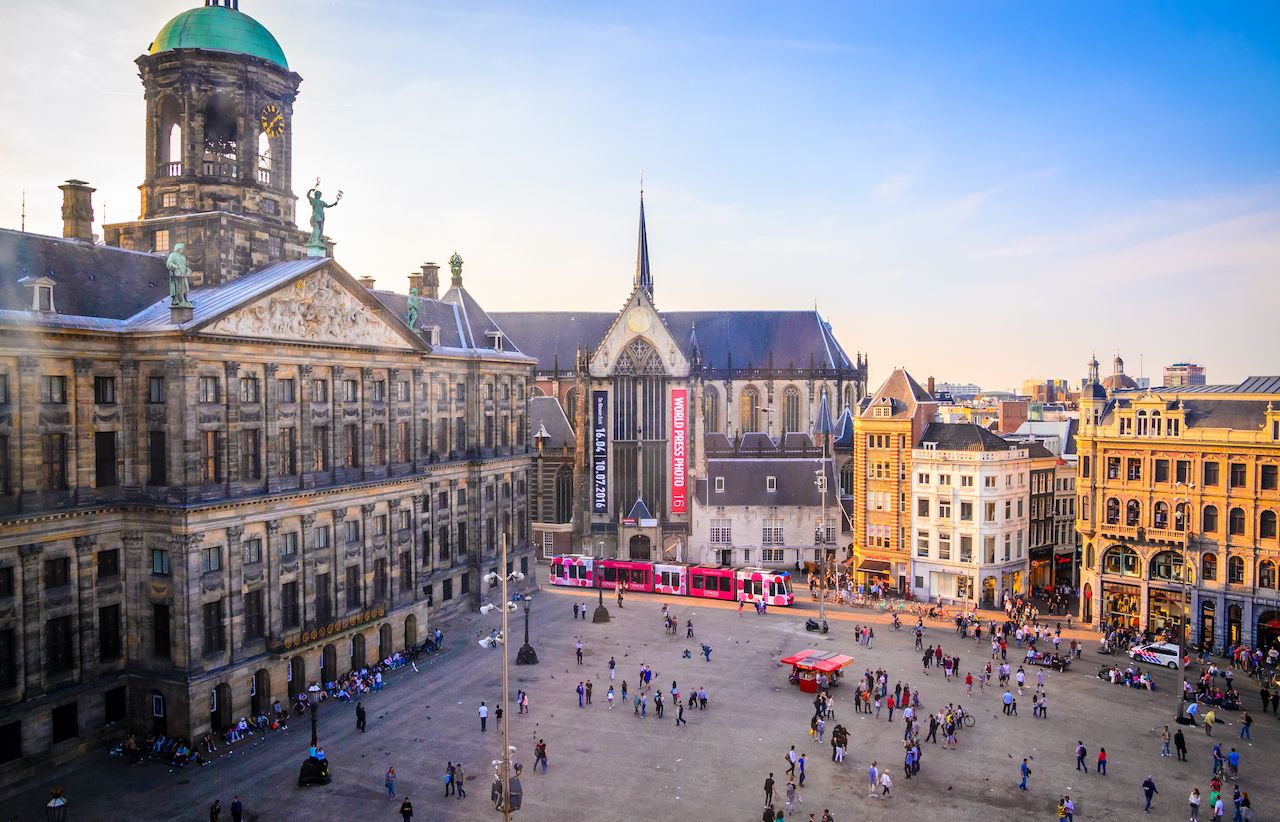 The historic center — Amsterdam’s historic center radiates from Dam Square, where a dam kept the city from flooding in the 13th century. Now a stage for celebrations, street entertainment, and social activism, it’s also where Atlas hoists the universe atop the Royal Palace, symbolizing the city’s 17th-century world dominance. Once occupied by Napoleon, it’s the only palace in the Netherlands that’s both open to the public and still used for royal receptions. De Nieuwe Kerk (The New Church), where King Willem-Alexander married Maxima in 2002 and was crowned the Netherlands’ first king in a century following his mother’s abdication in 2013, sits on one side of the square.

On the opposite edge, the 800-year-old Oude Kerk (Old Church) presides over windows showcasing sex workers and the rowdy bars of De Wallen, known to tourists as the red-light district. The oldest and one of the most beautiful parts of the city is punctuated with coffeeshops and peep shows, interspersed with fine restaurants, a craft brewery, and Ons’ Lieve Heer Op Solder (Our Lady in the Attic), once a secret Catholic church that’s now a museum. 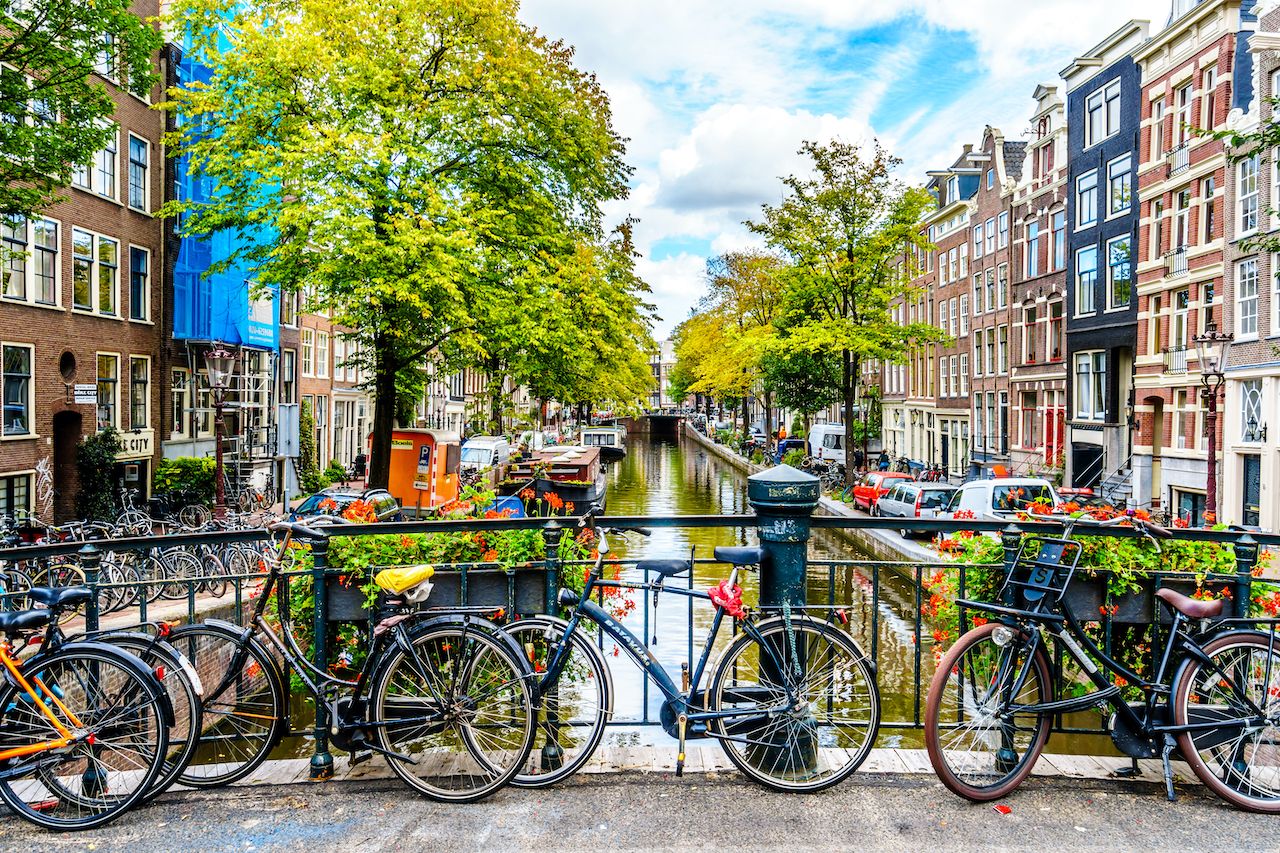 Jordaan — What began as a working-class bastion of artists, immigrants, and construction workers — many employed to dig the canals of the Grachtengordel — has evolved into an upscale neighborhood filled with young bohemians and artsy professionals. With its cobbled streets, gabled homes, and tree-lined canals, Jordaan is a postcard picture with a mix of art galleries, sidewalk bistros, and trendy boutiques. An impoverished Rembrandt lived here toward the end of his life, as did the Holocaust’s most famous diarist and her family before they were hauled away by the Nazis.

In the Jordaan’s maze of narrow streets, find such quirky attractions as Het Oud-Hollandsch Snoepwinkeltje, an old-fashioned candy boutique that stocks dozens of flavors of drop, a kind of licorice that’s the Netherlands’ national sweet. Discover a collection of automated pianos at the tiny Pianola Museum. Take a break at Café Chris, a typical brown cafe (so called due to its nicotine-stained walls that hark back to the pre-smoking ban era) that’s been serving Dutch beer to locals since 1624. If you’re in the neighborhood on a Saturday, browse for specialty foods at the Lindengracht Market. On Mondays, hunt for new and second-hand treasures at the Noordermarkt. 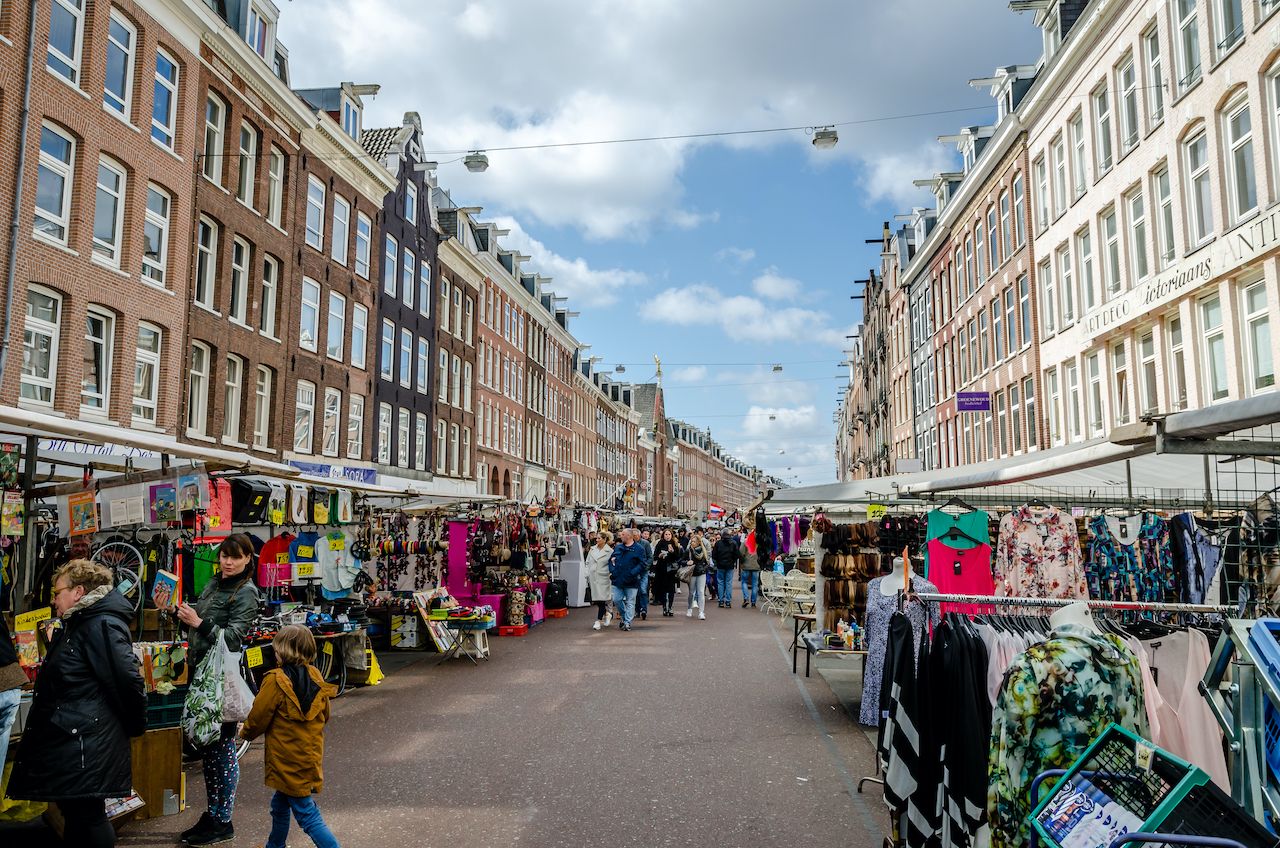 De Pijp — As the Jordaan overflowed with laborers in the 19th century, De Pijp evolved to accommodate the surplus. Known for narrow townhouses originally built to house low-income families, the neighborhood has been the home of students, artists, young professionals, and immigrants since the 1960s. Sometimes called “The Latin Quarter,” its cosmopolitan flair is evident in a pastiche of Syrian, Moroccan, Spanish, Indian, and Surinamese eateries, alongside Dutch pubs, Islamic butchers, and Turkish delicatessens.
De Pijp’s diverse demographics are abundantly clear at the Albert Cuypmarkt, centerpiece of the neighborhood, where you can buy just about anything you never thought you’d find in the Netherlands. The district also encompasses Sarphatipark, a two-block rectangle of green with a lake, small bridges, and playground equipment. A 19th-century monument honoring Jewish doctor and philanthropist Samuel Sarphati, who fought city hall to see the park built, dominates the relaxed open space.

Just north of Sarphatipark is what remains of the establishment that once permeated De Pijp with the fragrance of fermenting hops. Now an overpriced brewery-turned-museum, the Heineken Experience pays homage to a beer now produced by a multinational firm. 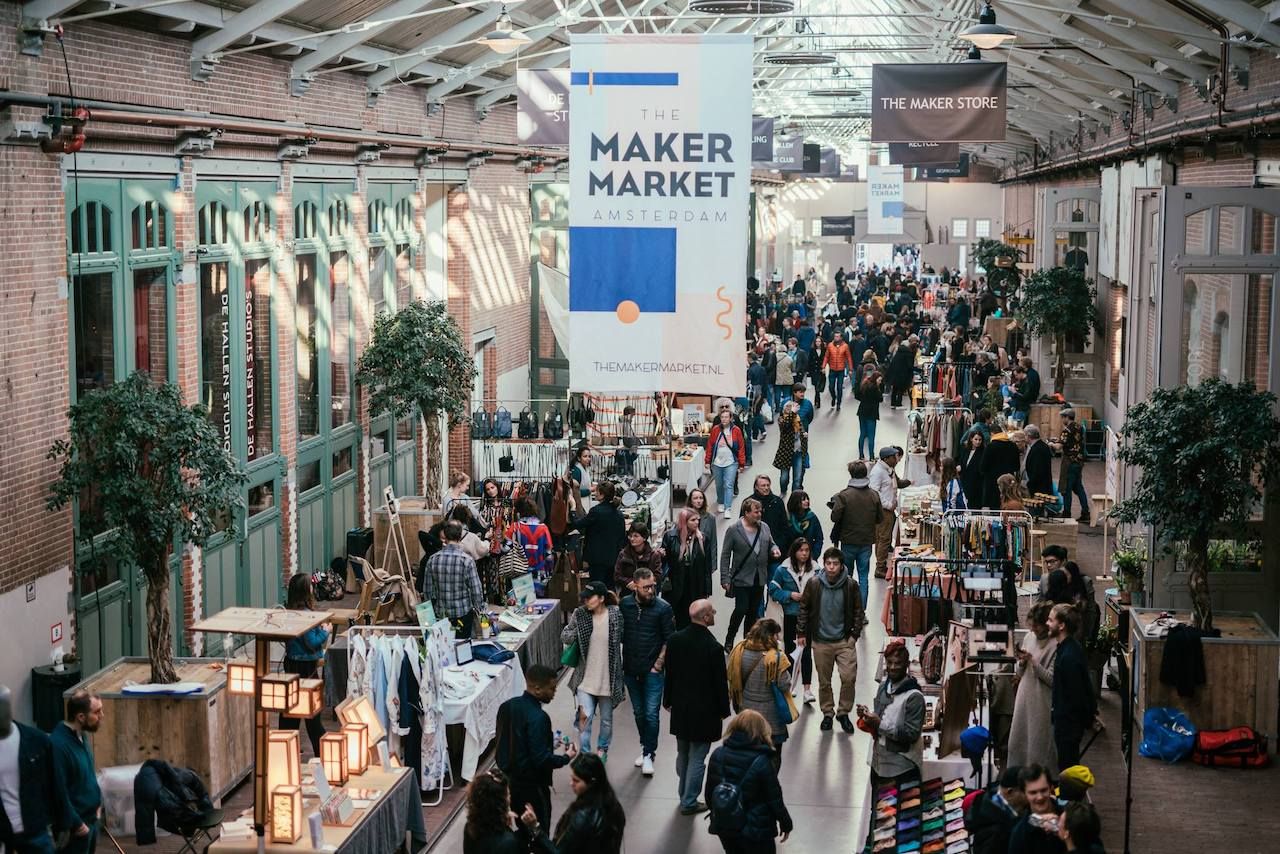 Oud-West — Just far enough from Dam Square to be off the main tourist track but easily accessible on foot, by bike, and tram, Oud-West is a lively suburb with a diverse crop of restaurants, boutiques, and concept stores. The neighborhood is a blend of residential pockets served by many Moroccan and Turkish shops and cafes, interspersed with Dutch pubs and other eateries.

Since the debut of De Hallen in 2014, the Oud-West has undergone a renaissance. The turn-of-the-century tram depot-turned-cultural hotspot features an indoor food market offering street food from some of Amsterdam’s most respected kitchens, an arthouse cinema, independent creative outlets, and a weekly indoor craft market. The complex injected new life into a district with such architectural treasures such as the Zevenlandenhuizen (Houses of Seven Countries), a collection of homes bordering Vondelpark, each representing a different country.

A century before De Hallen opened, vendors were selling fresh produce and plants at the Ten Katemarkt, a small street market with a local vibe where you’ll find snacks like Dutch stroopwafels, Vietnamese loempia, and Indonesian soup that reflect the neighborhood’s multicultural makeup. You’ll find one entrance to De Hallen midway through the Ten Katemarkt, which still offers fresh fruit, vegetables, flowers, toys, electronics, and just about anything you might need. 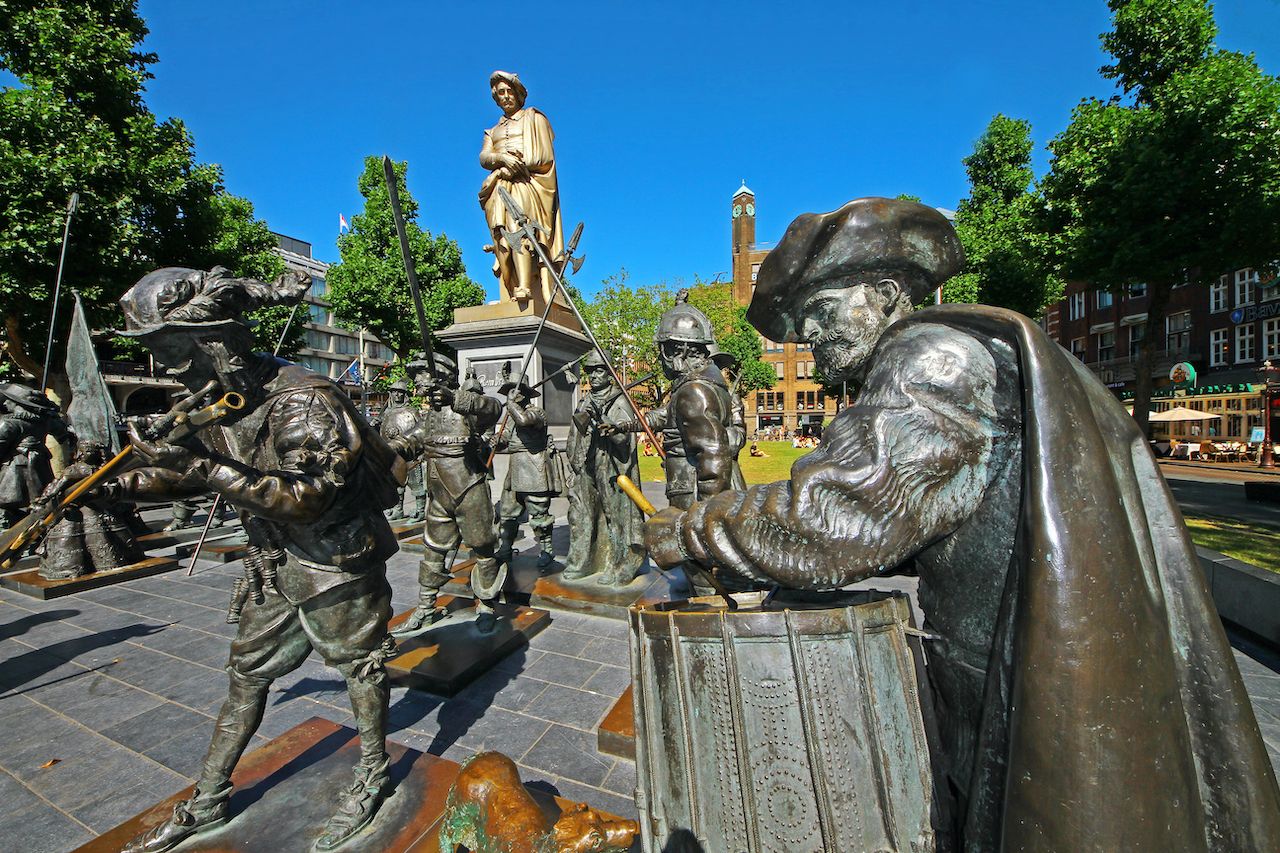 De Plantage — Far greener and less touristy than Amsterdam’s historic center, De Plantage has wide, leafy boulevards that contrast with the Canal Belt’s narrow, cobblestoned streets. The neighborhood is home to the Hortus botanical gardens and the city’s Jewish Quarter, where Rembrandt lived at the height of his fame. Today the famous painter’s house is a museum replete with prints, sculptures, and paintings that reconstruct his life in the Dutch Golden Age.

The legacy of the Jews in Amsterdam is preserved in the Jewish Cultural Quarter, encompassing the Jewish Historical Museum, Portuguese Synagogue, Dutch Resistance Museum, and Hollandsche Schouwburg, a theater that served as the last stop in Amsterdam for 104,000 Jews deported from the Netherlands to extermination camps during World War II. Waterlooplein, the main square that was once the core of the community, is now better known for its daily (except on Sundays) flea market.

Across the Amstel River, Rembrandtplein is the site of hip nightclubs, trendy bars, and smoky coffeeshops. A cast iron statue of Rembrandt, made in 1852 by sculptor Louis Royer, presides over the lively square. To mark the 400th birthday of the famous Dutch painter, a bronze-cast representation of his most famous painting, “The Night Watch,” by Russian artists Mikhail Dronov and Alexander Taratynov, was installed in 2006 around Royer’s work.

Further south, the Royal Theatre Carré hosts cabaret, opera, and Broadway musicals. At The Hermitage, Peter the Great’s fascination with Amsterdam’s enlightened culture is on full display in this museum of Dutch-Russian history modeled after its namesake in St. Petersburg. 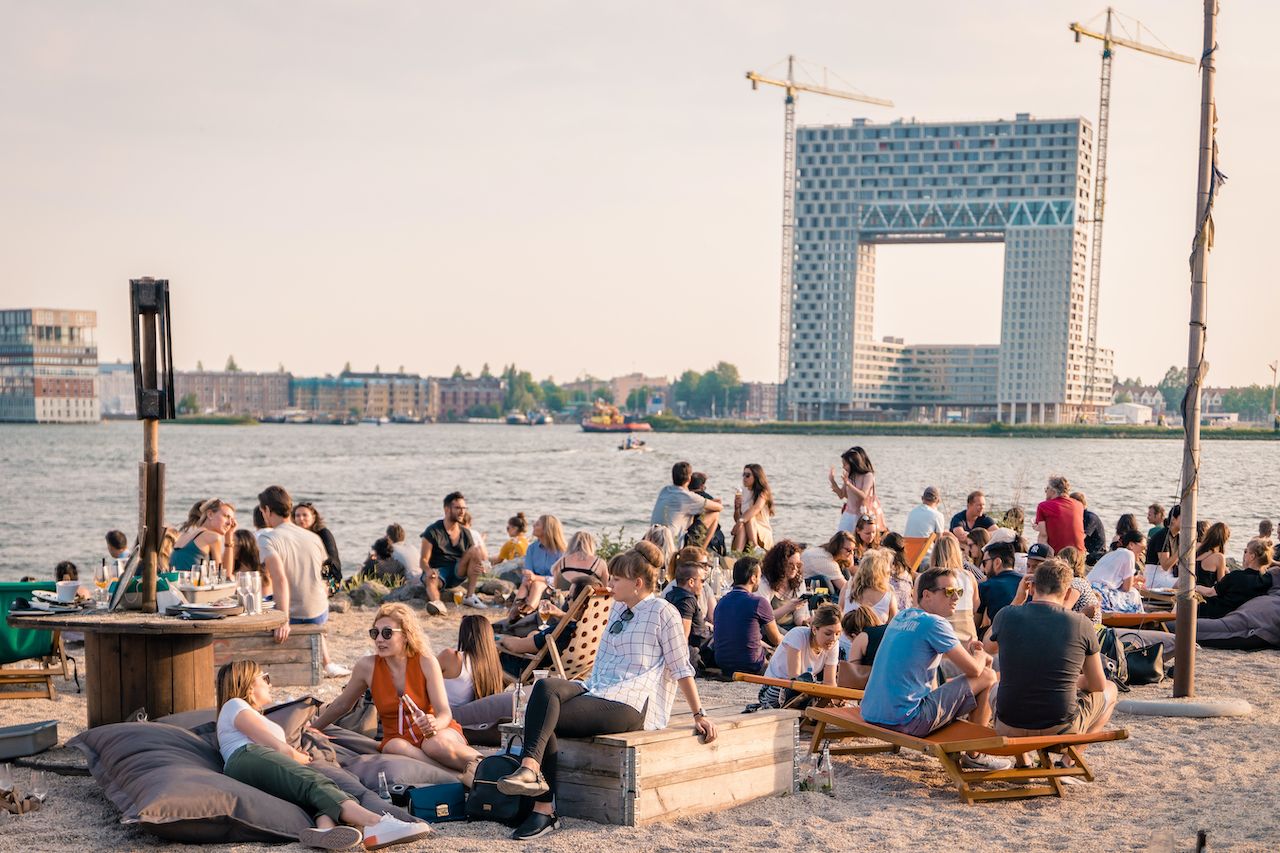 Noord-Amsterdam — Free ferries on the IJ River side of Central Station, as well as buses and a new Noord-Zuid metro line, connect Noord to central Amsterdam. An abandoned submarine welcomes you to NDSM Wharf, an old shipyard-turned-edgy arts community. In this bohemian landscape, industrial castoffs have been repurposed into posh accommodations at the Crane Hotel Faralda, while old shipping containers have morphed into a holistic-inspired restaurant at Pllek. On the second weekend of most months, maritime history combines with the neighborhood’s creative spirit at IJ-Hallen, Europe’s largest flea market.

The IJ waterfront also has the futuristic EYE Filmmuseum, an homage to international cinema topped with a restaurant with views of boats plying the IJ River, as well as central Amsterdam across the water. The adjacent Tolhuistuin, housed in a former canteen for Shell employees, hosts an eclectic program of dance, film, music, and other cultural events.

Dominating the skyline, A’DAM Toren houses two upscale restaurants, a grunge-chic nightclub, and a sky-high swing, all with dizzying city views. Further inland, Noord’s progressive culture is evident at De Ceuvel, a clean-tech playground with a hip cafe. Just beyond, traditional Dutch farmhouses in pastoral villages are a throwback to the past.