In a European capital known for edgy nightlife, after-dark options include sexy lounges, pulsating nightclubs, historic brown cafes, and centuries-old tasting rooms. Amsterdam’s nightlife choices are vast, and the city’s Night Mayor (yup, that’s a real title) is always looking for new ways to take it to the next level. You can chill at a sleek speakeasy, rock out in a funky basement, or swoon over cocktails and panoramic views at a rooftop bar into the wee hours. For visitors looking for a little bit of everything, the Amsterdam Nightlife Ticket has options to purchase a two-day pass for free entry to 20-plus clubs for 10 euros or a seven-day pass for 20 euros.

The city issued its first 24/7 bar licenses in 2013, and round-the-clock clubbing has been a growing trend. Also on the rise is a sophisticated cocktail culture in a city long steeped in beer. While traditionalists can still enjoy a glass of genever in a historic tasting room, there’s also the option to sip new takes on classic cocktails at one of the city’s posh gin bars. These are the best bars and nightclubs in Amsterdam’s hottest neighborhoods. 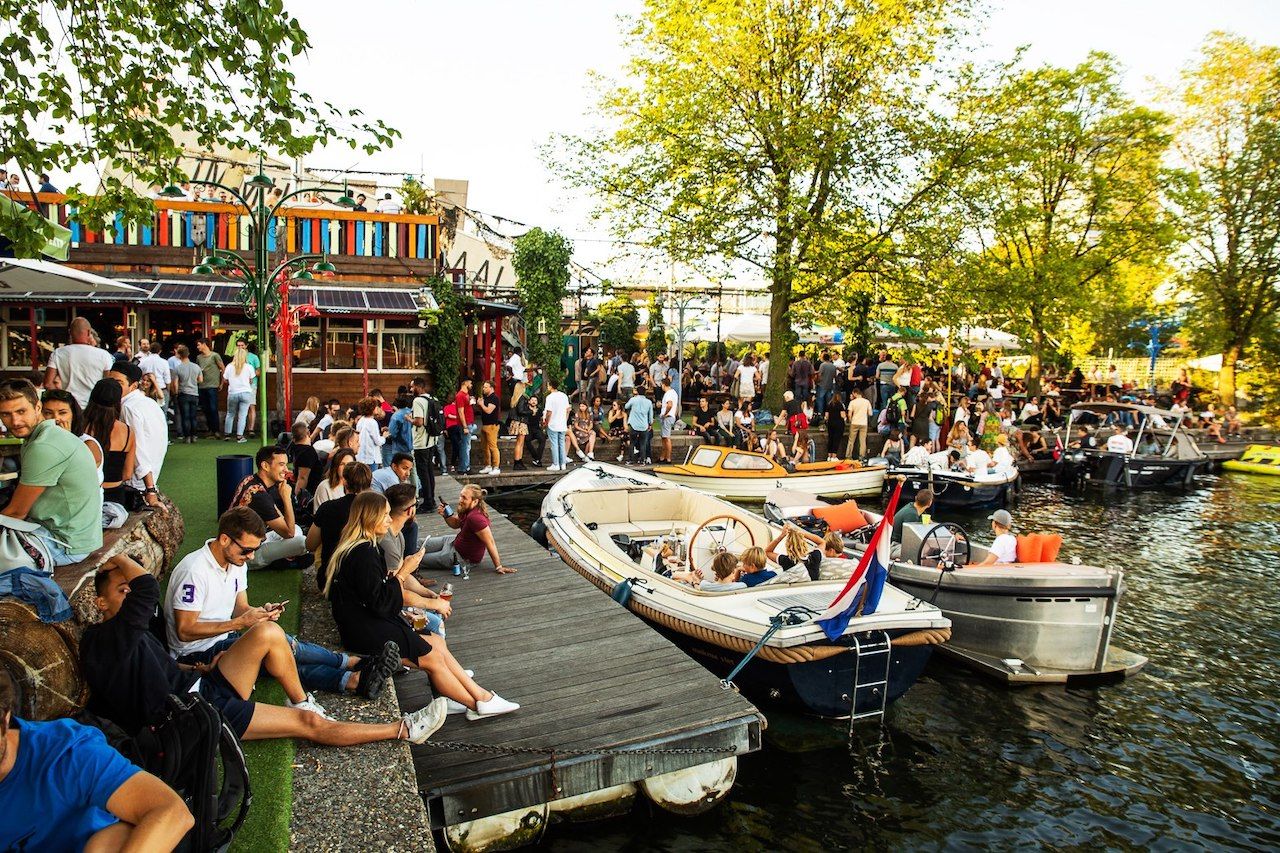 Hannekes Boom $$ — A relaxed gastro-bar on the water that’s furnished with recycled furniture. Especially popular in the summer when it’s easiest to take full advantage of the sunshine, you can moor your boat in what was once a 17th-century guardhouse to get to Hannekes Boom. Once there, grab a drink and dangle your toes from a waterfront terrace overlooking NEMO and the Amsterdam skyline.

Sky Lounge $$$$ — See and be seen at this chic rooftop bar on the top of the Hilton Doubletree, located just east of Central Station. There are unrivaled city views from the moment the elevator opens on the 11th floor, which compliment an exciting (but pricey) cocktail and spirits menu. There are also dishes like Wagyu burgers, tuna, and Peking duck, with small share plates for the group. 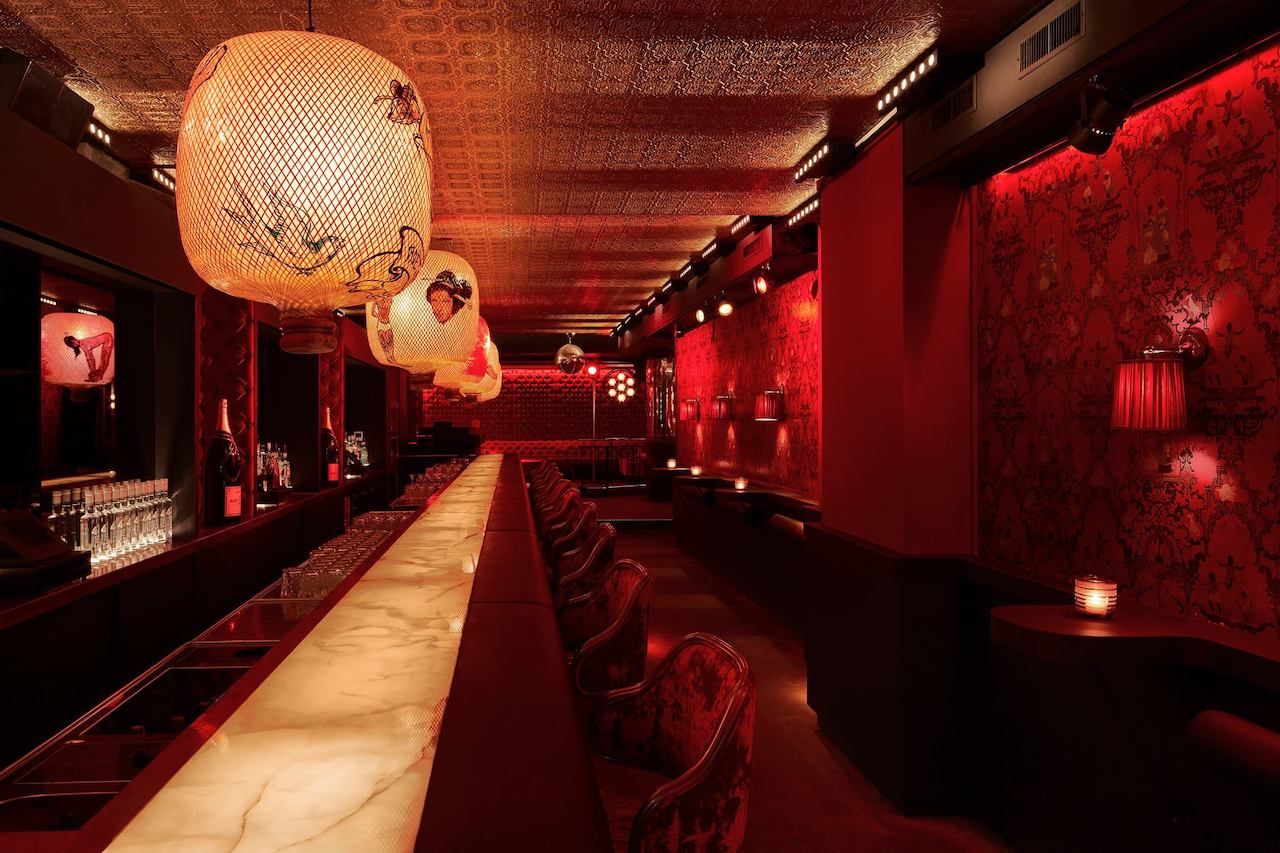 Club NL $$ — The interior of Club NL is dominated by red velvet, dark woods, and nude drawings, and it’s drawn in celebrities like Mick Jagger and Naomi Campbell. The focus here is on house and techno music, attracting top DJs and people to the dance floor. Try the signature drink, The Doodoo, made with vodka, Tabasco, an olive, lime, and a secret ingredient. Music plays from 10:00 PM to late every day but Tuesday.

Tales & Spirits $$ — Housed in a historic building, this cozy bar has a creative cocktail menu with inspired concoctions like The Fallen Lady (vodka, chocolate liqueur, raspberry syrup, lemon juice, and Burlesque bitters) and Any Port in a Storm (gin, rum, lime juice, bitters, beer, and a little pirate sherbet for added punch). Nearly a dozen iterations of the Old Fashioned also are served among the antiques and vintage posters. 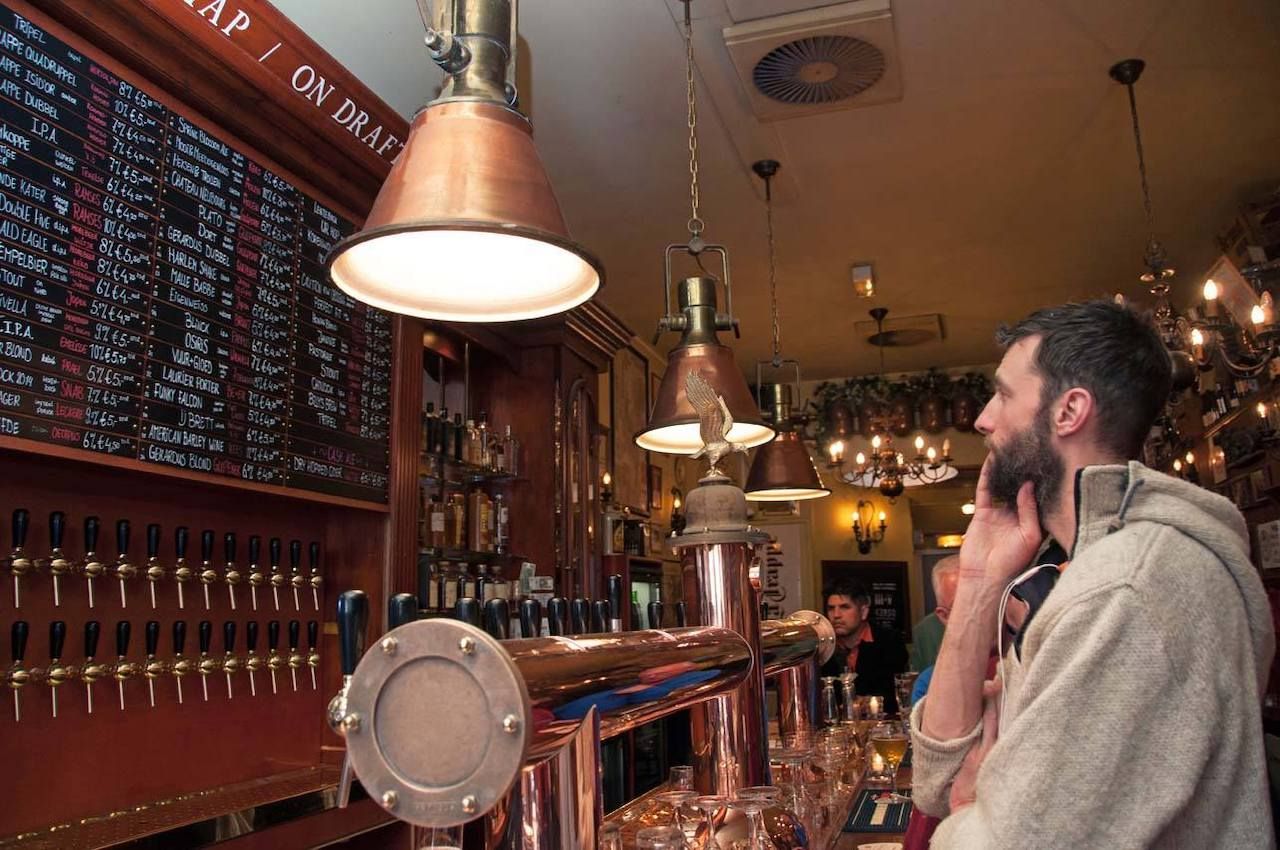 Proeflokaal Arendsnest $$ — Proving there’s more to local beer than Heineken, this old-fashioned homage to Dutch brews offers more than 50 different beers on tap and 100-plus in bottles — all of which are made in the Netherlands. Amidst wood-panelled walls, copper pipes, and gleaming beer taps, you can also sample Dutch ciders, liqueurs, whiskeys, and more than 40 varieties of genever, the Netherlands’ iconic spirit.

Bitterzoet $$ — Depending on the night, this slick, two-story nightclub has Afro-Cuban jazz fusion, funk jam sessions, hip hop battles, skateboarding performances, rock nights, or techno and house parties. There’s a grand bar, stage, and dance floor on the ground floor while a calmer bar and theater podium are on the upper level. Bitterzoet draws a young, hip crowd.

Supperclub $$$ — Part bar, part restaurant, and part performance space — you can eat an unconventional five-course meal at this innovative nightclub complete with cocktails and burlesque. You can watch from the lounge floor couches or head upstairs for a top view of the belly dancers, drag queens, and aerial artists performing below. The experience depends on the night, so be sure to check the website before going. 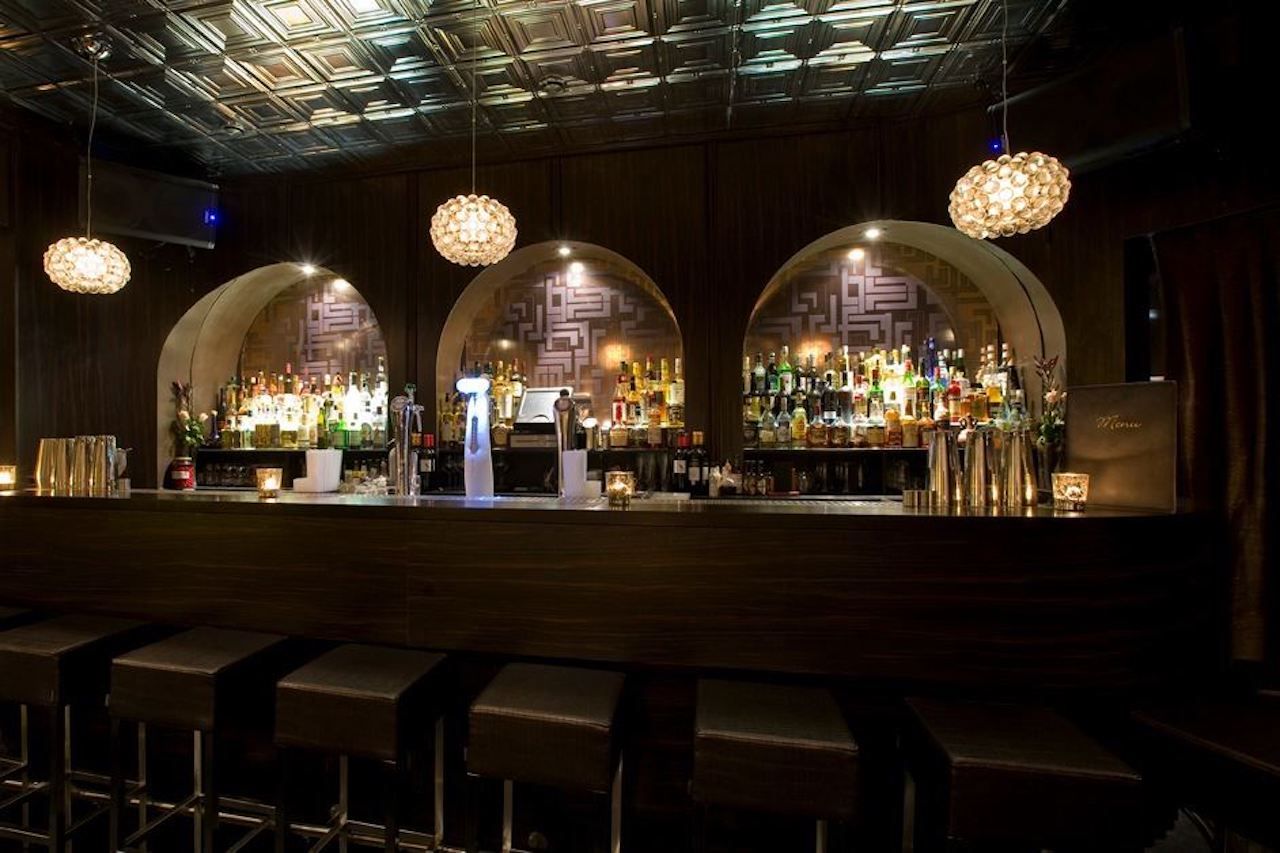 Door 74 $$$ — Designed for a vibe like a Prohibition-era speakeasy in the United States, Door 74 has an unmarked entrance. Once you find it, settle in for classic and innovative cocktails, dark wood furniture, Art Deco accents, and antique barware.

Club NYX $$ — This LGBTQ-friendly club is named for the Greek goddess of the night. Set in a former carriage house, Club NYX offers three floors of dance, hip-hop, and pop, plus a DJ in the open-plan bathroom on the top floor, where you can groove to the beat while washing your hands in a giant, penis-shaped sink. 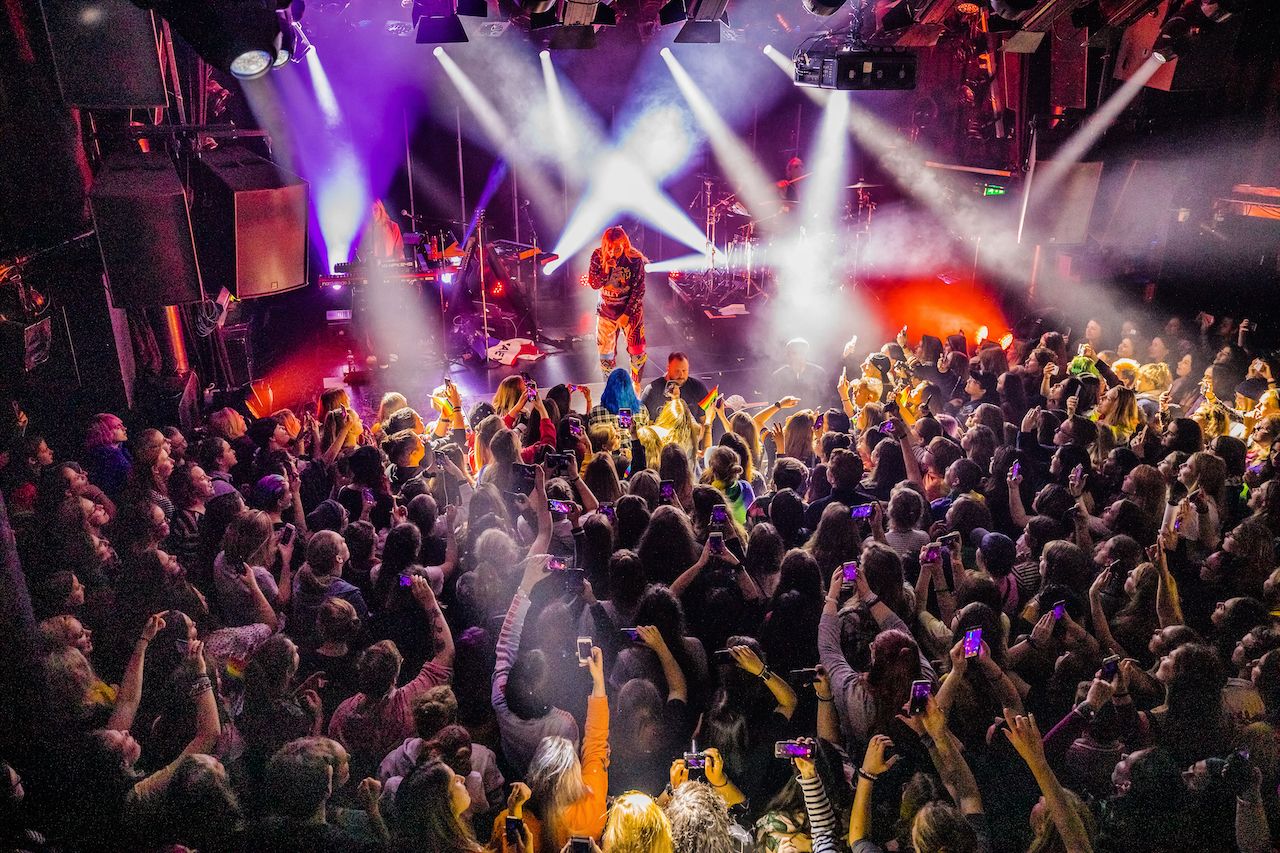 Melkweg $$ — One of the city’s leading music venues is housed in a sprawling, industrial-style space that was once a dairy factory. Named after the group of counterculture artists that founded it in 1970, Melkweg is now a world-renowned concert venue with three music halls, an exhibition space, a rear cafe, and an attic movie theater. Headliners like Prince and Lady Gaga have performed on its largest stage while its more intimate Oude Zaal hosts internationally famous DJs, popular Dutch hip hop artists, and up-and-coming bands.

Where: Lijnbaansgracht 234A, 1017 PH Amsterdam, Netherlands

Paradiso $$ — A nightclub that was once a 19th century church and ’60s hippie squat that has grown to host musical icons like The Rolling Stones, Adele, and Lady Gaga. A smaller hall sets the stage for indie bands and local artists. Fashion, dance, poetry, and other creative events round out the action. 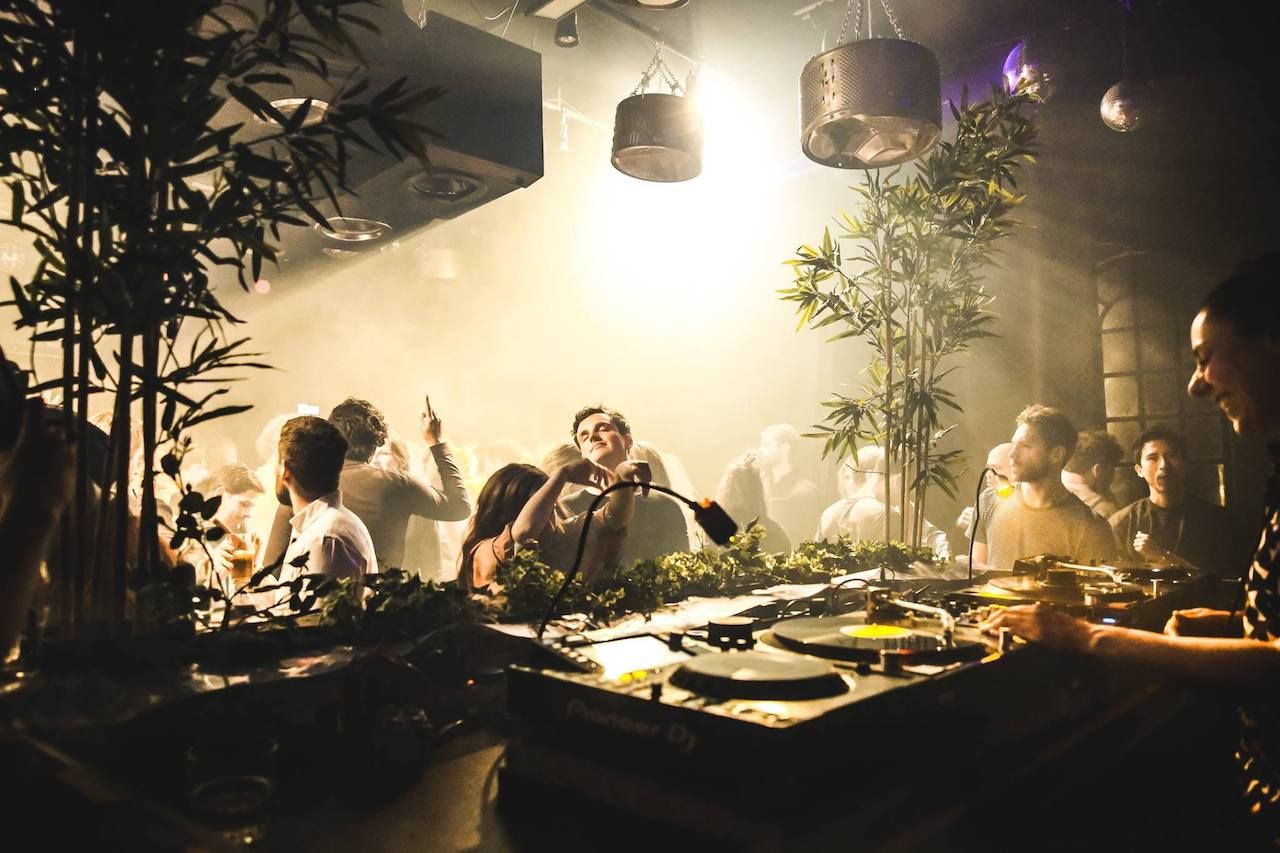 Air $$$ — Intimate zoning with plenty of side rooms makes one of Amsterdam’s largest music venues cozier than its 1,300-capacity space might suggest. Set on one of the city’s liveliest public squares, Air is known for a superb sound system that’s amplified the sets of Afrojack, Sasha, and Steve Aoki, among other internationally renowned artists. Add five funky bars, state-of-the-art technology, and a crazy LED wall, and you have one of the city’s it clubs for late night action.

Escape $$$ — Dance clubs come and go in Amsterdam, but Escape prides itself on being an evergreen part of the city’s nightlife. With a broad musical menu and renowned DJs spinning everything from electro and house to R&B, this multi-floor venue attracts both locals and tourists to its numerous rooms, halls, and a restaurant overlooking bustling Rembrandtplein. 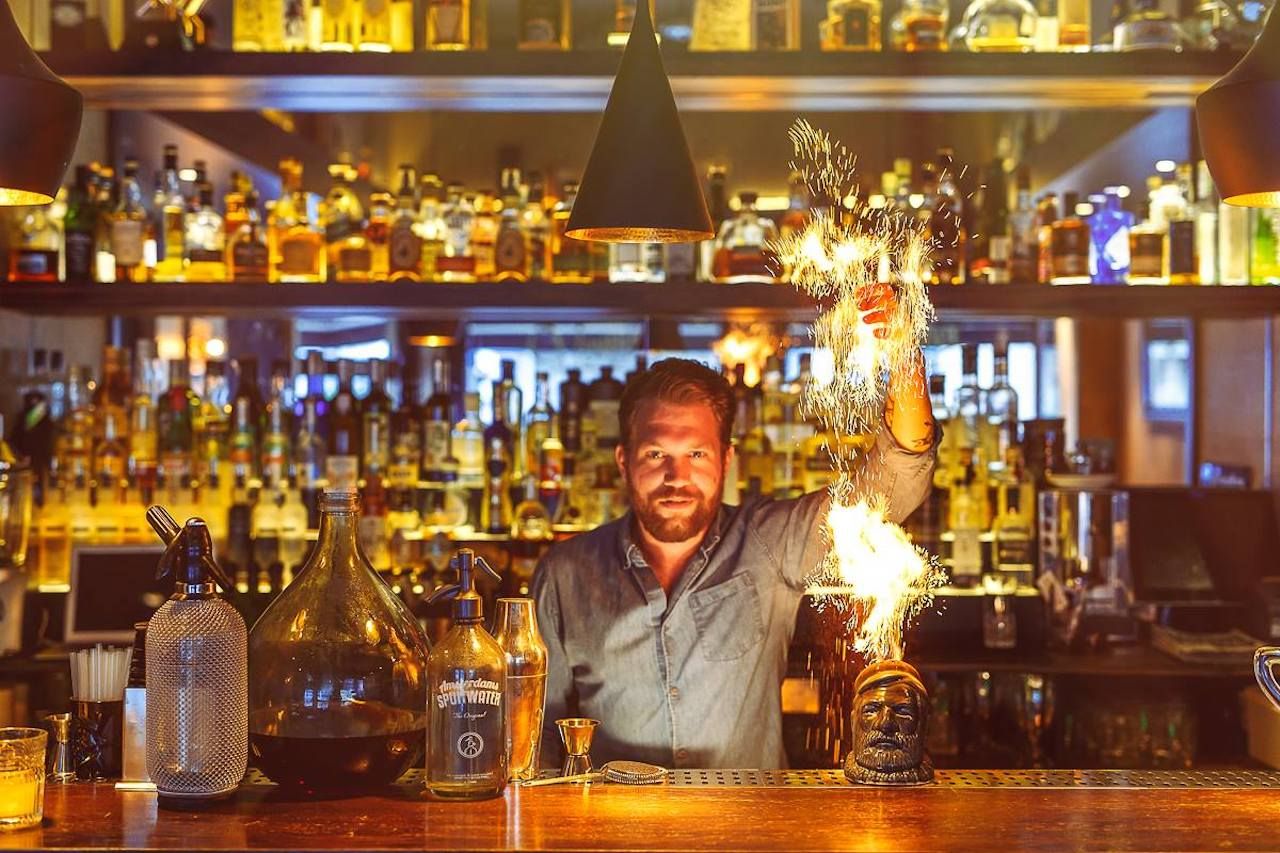 Vesper $$ — The namesake of Vesper Lynd, James Bond’s alleged true love, is an elegant bar just off trendy Haarlemmerstraat. Classic and new cocktails are served up in this spot, which is a sophisticated hideaway to romance a date on the edge of the postcard-perfect Jordaan.

Boom Chicago $$ — Laughter is the best medicine at this comedy club founded by American expats. It’s also where Emmy Award-winning comedy host Seth Meyers got his start. Pre-order a bottle of wine or bucket of beer for English-language shows like The Madness of King Donald and Shot of Improv. 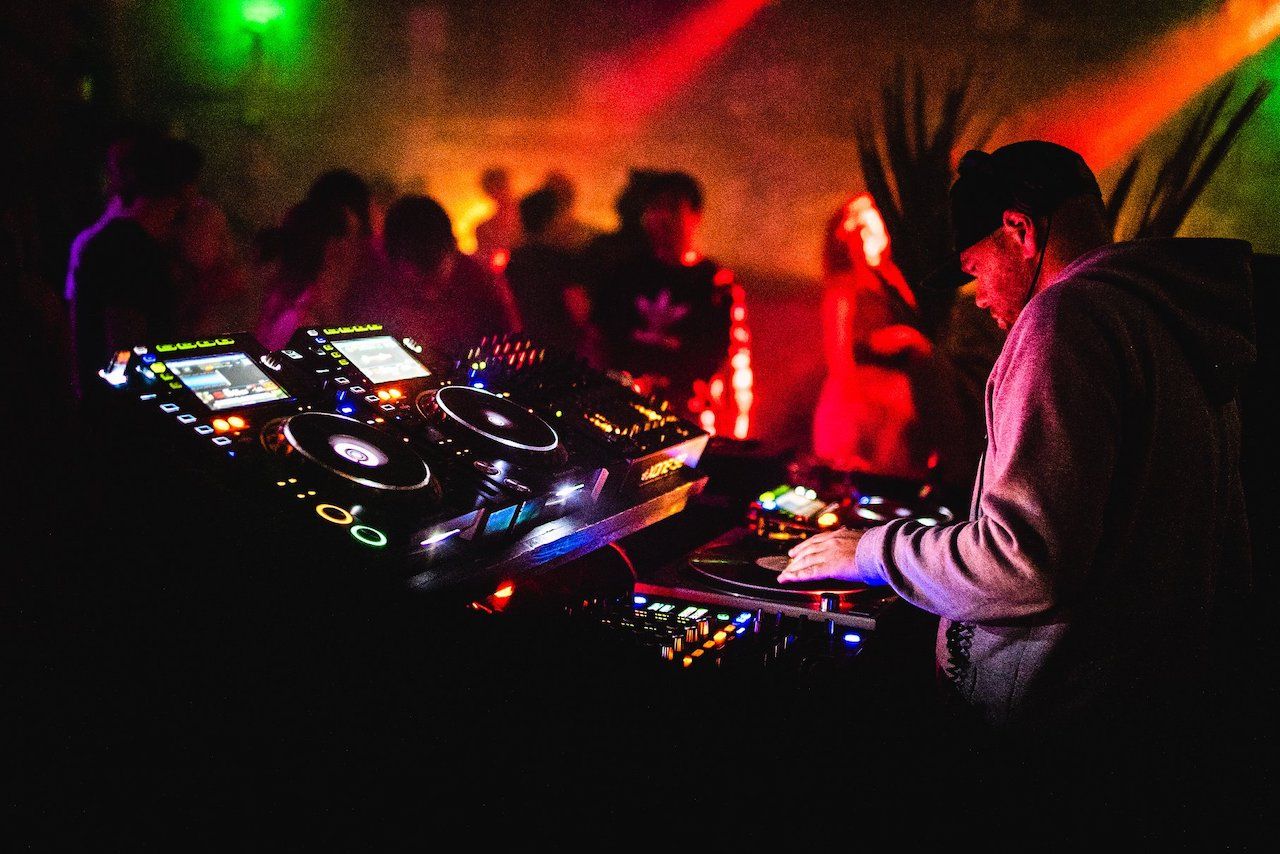 Radion $$ — Veteran clubbers will appreciate the underground vibe and sound system of this grunge haven set in a former dental research building in Amsterdam’s unassuming Nieuw-West. A 24-hour license means you can dance until dawn to ear-popping techno. The club also hosts art and cultural events and is home to a cinema, as well as a cafe serving lunch, dinner, and drinks.

OT301 $$ — Set amidst the furniture shops and restaurants on Overtoom, this former squat packs in 300 underground sound fans for rowdy club nights, concerts, and art exhibit collaborations. Look for the multi-story, graffiti-covered building with a raw yet cozy interior. Inside, there’s a club, tiny dance room, gallery space, vegan restaurant, and a cinema that screens foreign and independent films. 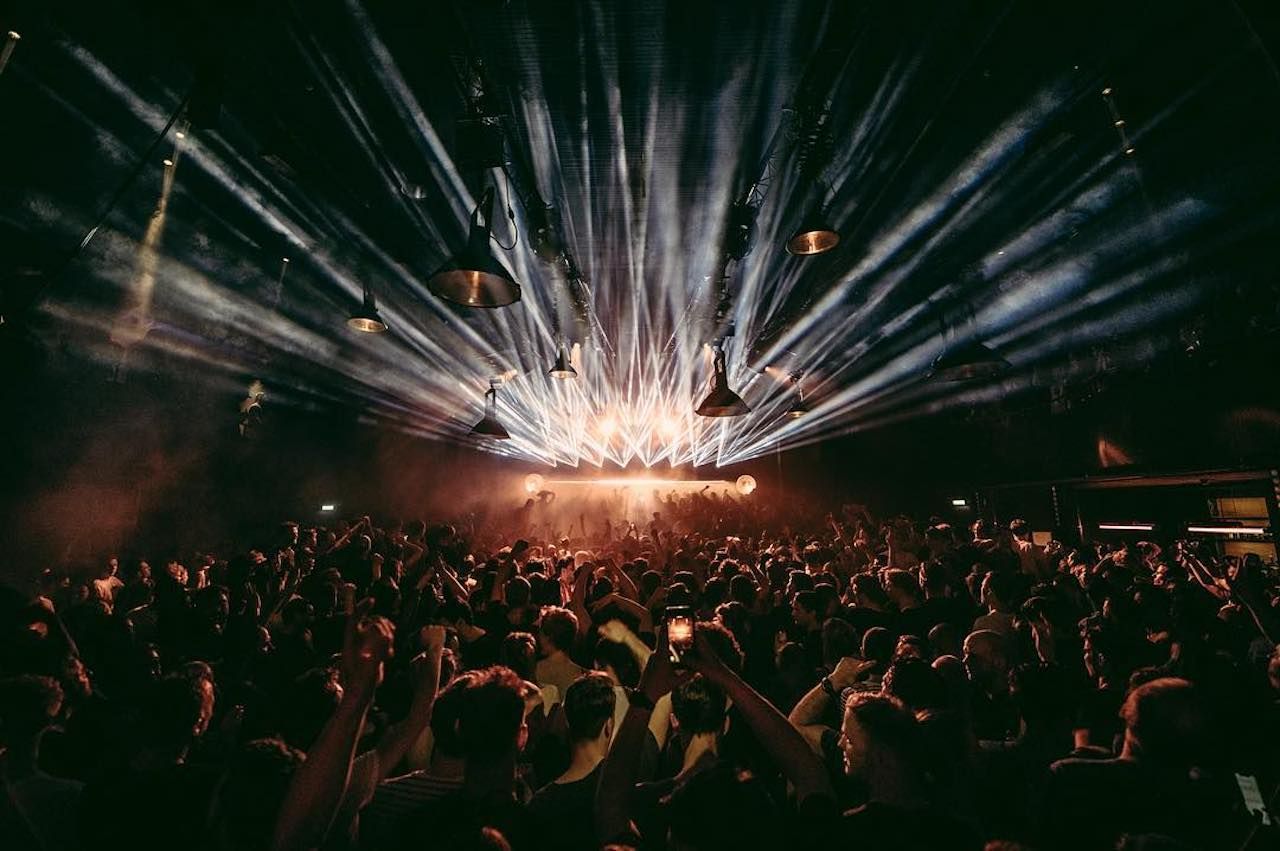 De Marktkantine $$ — Once a canteen, then a theater, the 3,000-square-foot space inside Amsterdam’s Marcanti Building is now a multi-room techno club with eclectic programming. Throw off your shoes and connect with the music at uninhibited Ecstatic Dance nights, enter a new dimension at a Moon Meditation, or don your sweatband for an all-night party. If you don’t like surprises, check the agenda before planning an evening at the newest incarnation of this spacious venue.

De School $$ — For a night of raw energy, head to this industrial-chic club set in a former school in Amsterdam-West. Along with a basement nightclub in an old bike shed, the popular venue houses multiple concert rooms, a restaurant, and exhibition space. Like its predecessor, Trouw, it has a 24-hour license, meaning nights can end with breakfast the next morning at the on-site cafe. 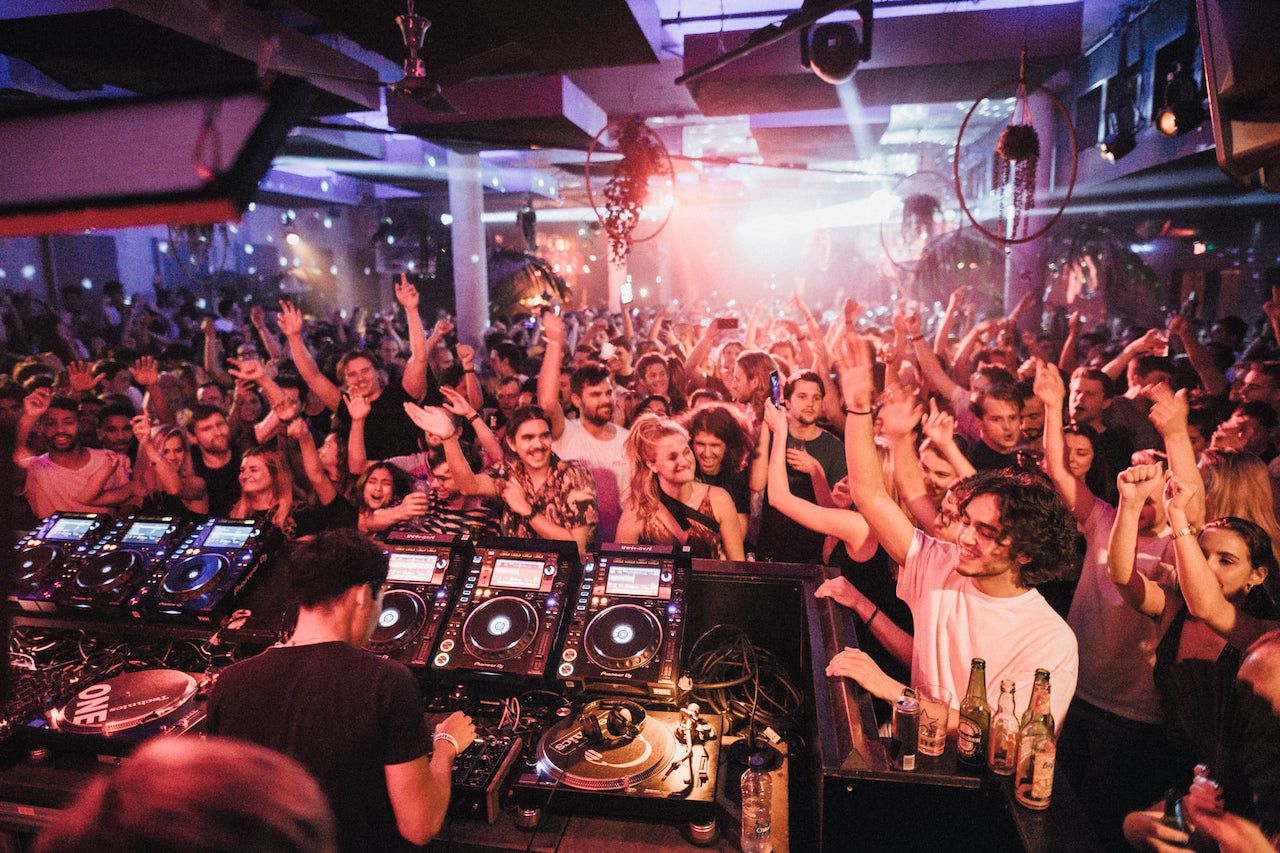 Shelter $$ — With its hidden trap door, concrete walls, and all-black décor, Shelter feels like a Berlin transplant plopped in the basement of the waterfront A’DAM Toren. Some of the city’s best house and techno sounds emanate from the bleak interior of this new addition to the club scene, where nights merge into mornings thanks to a 24-hour permit.

Tolhuistuin $$ — The canteen of the old Shell factory, Tolhuistuin has been transformed into a cultural destination offering an eclectic mix of mainstream and avant-garde music and theater. The restyled venue features a spacious cafe, three theater and concert halls, a terrace overlooking the IJ, exhibition spaces, a hip-hop school, and a children’s art hall. 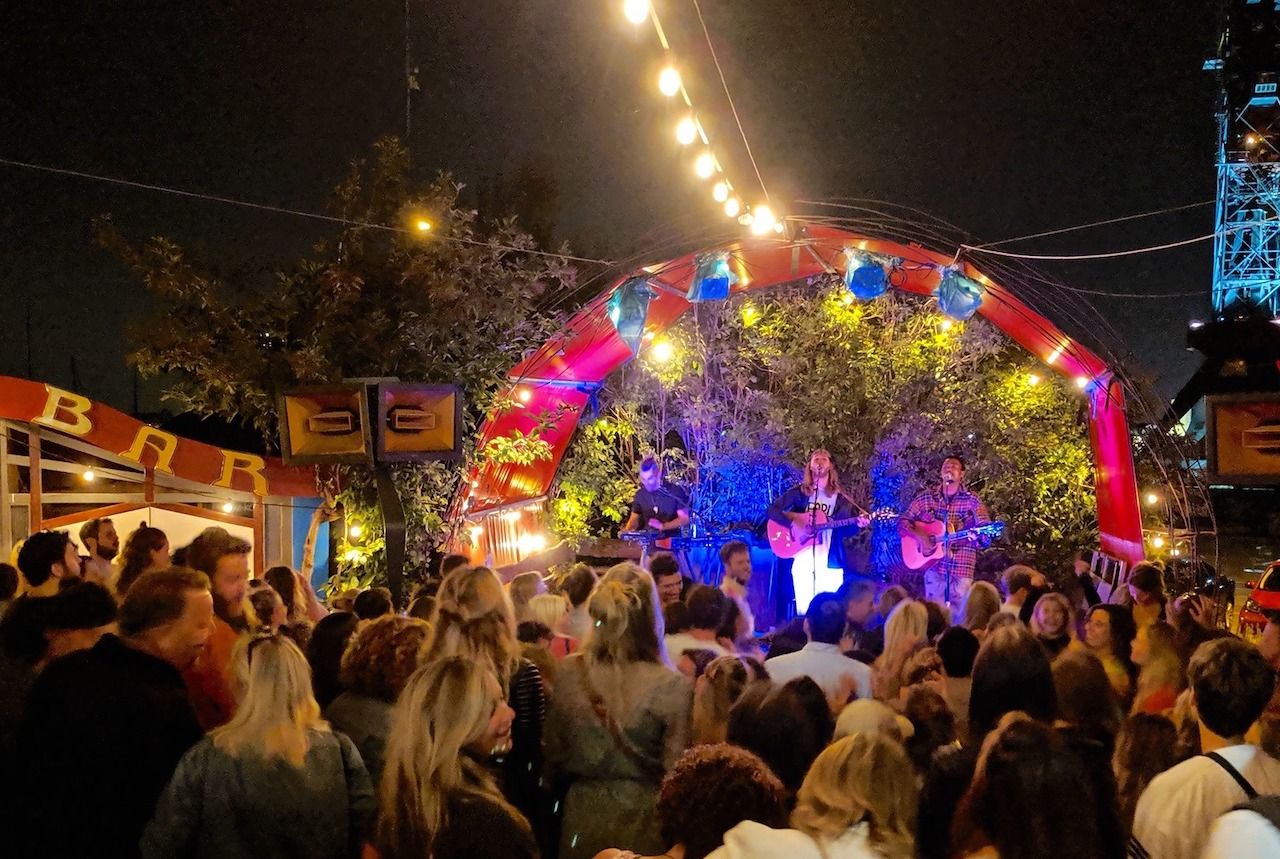 Noorderlicht $$ — With its airplane hangar shape and greenhouse-like architecture, Noorderlicht is easy to spot in NDSM yard’s funky landscape. On a hopping night, the cafe blazes with neon hues visible clear across the IJ River. The setting is more intimate on a waterfront terrace warmed by a roaring bonfire, where you can dine, drink, and dance with a spectacular view of the Amsterdam city center.