When people think of British food, fish and chips and Cornish pasties are among the main dishes that come to mind. Of course, people should try these classics on a trip to the United Kingdom, but in London, you’ll find a sprawling culinary scene with plenty of other options, too. New and daring chefs set the standard across the city’s pop-ups, gastro pubs, and gourmet restaurants. With 69 Michelin-starred restaurants in London alone, visitors can expect to enjoy a wonderful dining experience in the capital. These are the must-try restaurants in London’s hottest neighborhoods. 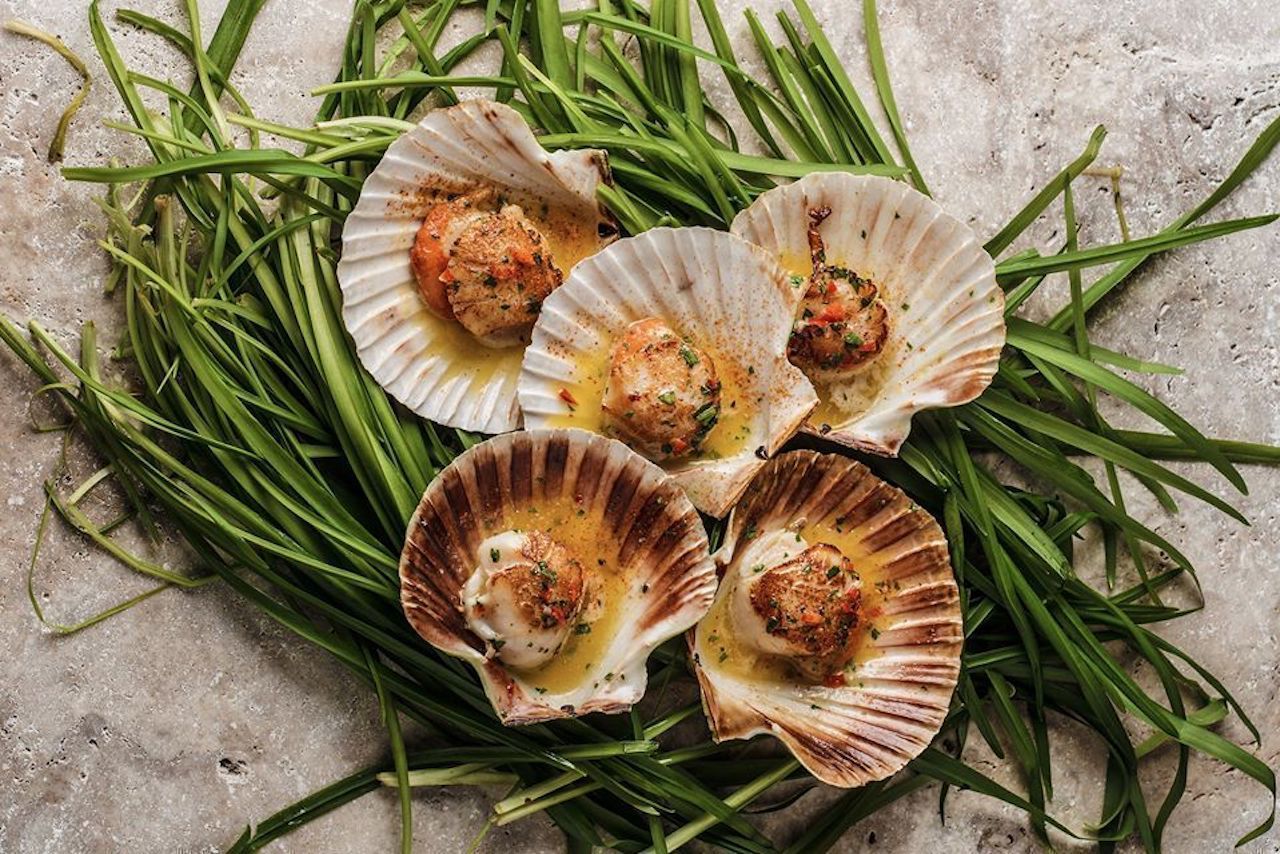 J. Sheekey $$$ — Easily identified by its sleek red exterior, J. Sheekey’s is one of the capital’s most famous oyster and seafood restaurants. Open since the 1890s, this restaurant features an open kitchen, horseshoe-shaped bar, prominent artwork, and banquette seating. Watch the chefs as they serve up a wonderful selection of shellfish, market fish, and main courses like the grilled lobster and a Cornish fish stew. There’s also a vegetarian menu with plenty of vegan options. Be sure to make a reservation.

Monmouth Coffee $$ — A landmark destination for anyone who knows their lattes from their flat whites. Located on Monmouth Street, this shop has been roasting coffee beans onsite since 1978. It’s a local favorite — something that’s easily noticed thanks to the constant queue that snakes around the corner. Despite the line, the wait is rarely too long. 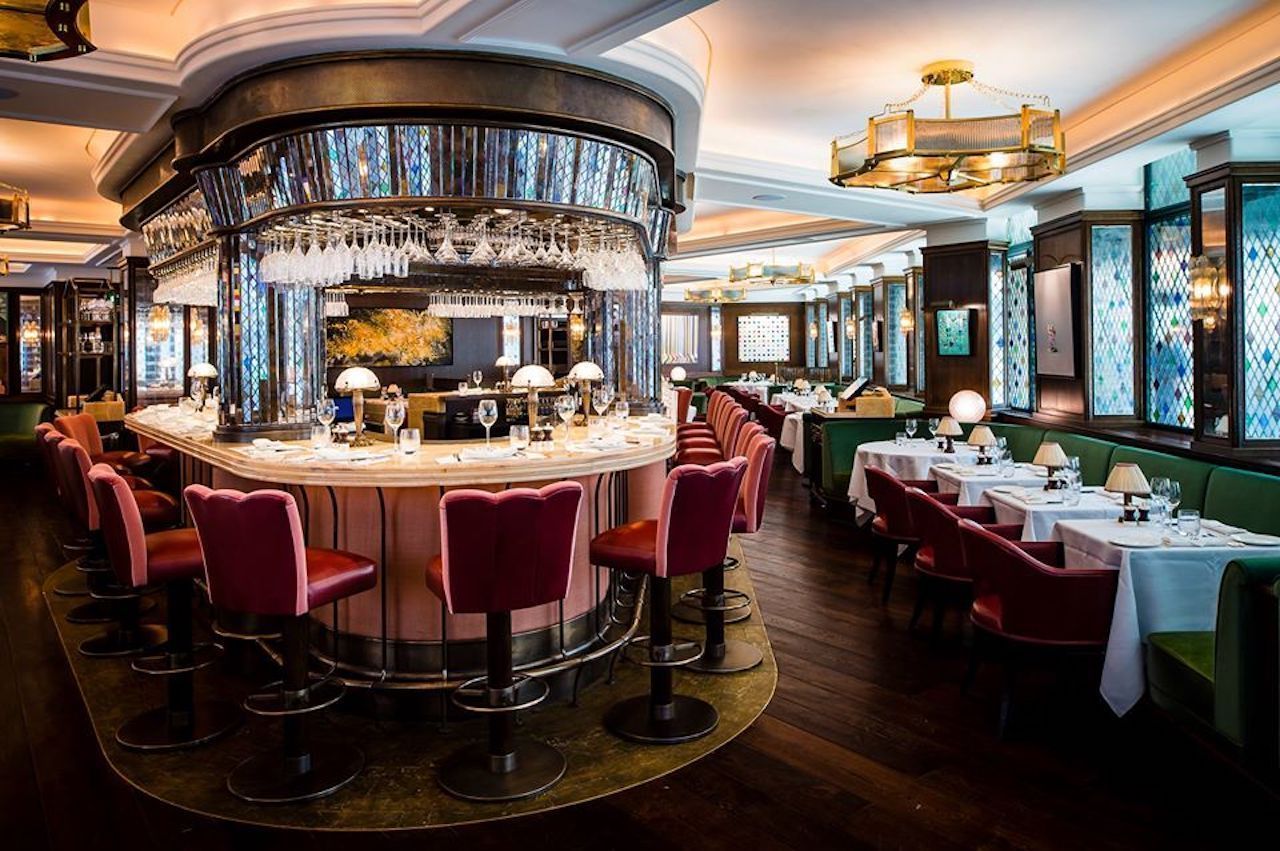 The Ivy $$$ — Just a few minutes from J.Sheekey in the heart of London’s theaterland, The Ivy is a restaurant every Londoner has to visit at least once. Serving diners since 1917, this restaurant was almost exclusively a celebrity haunt in the 1990s. Nowadays, everyone can enjoy the classically elegant decor and exceptional service. The menu options are British with a few Asian-inspired dishes mixed in. Signature dishes include shepherd’s pie, Thai sea bass, and Devonshire duck breast.

On the Bab $$ — Tuck into tasty Korean dishes at this highly popular yet affordable eatery. Inspired by Korean Street food, On the Bab focuses on small plates to share. Popular options include bulgogi beef, kimchi, fried chicken, and spicy pork. 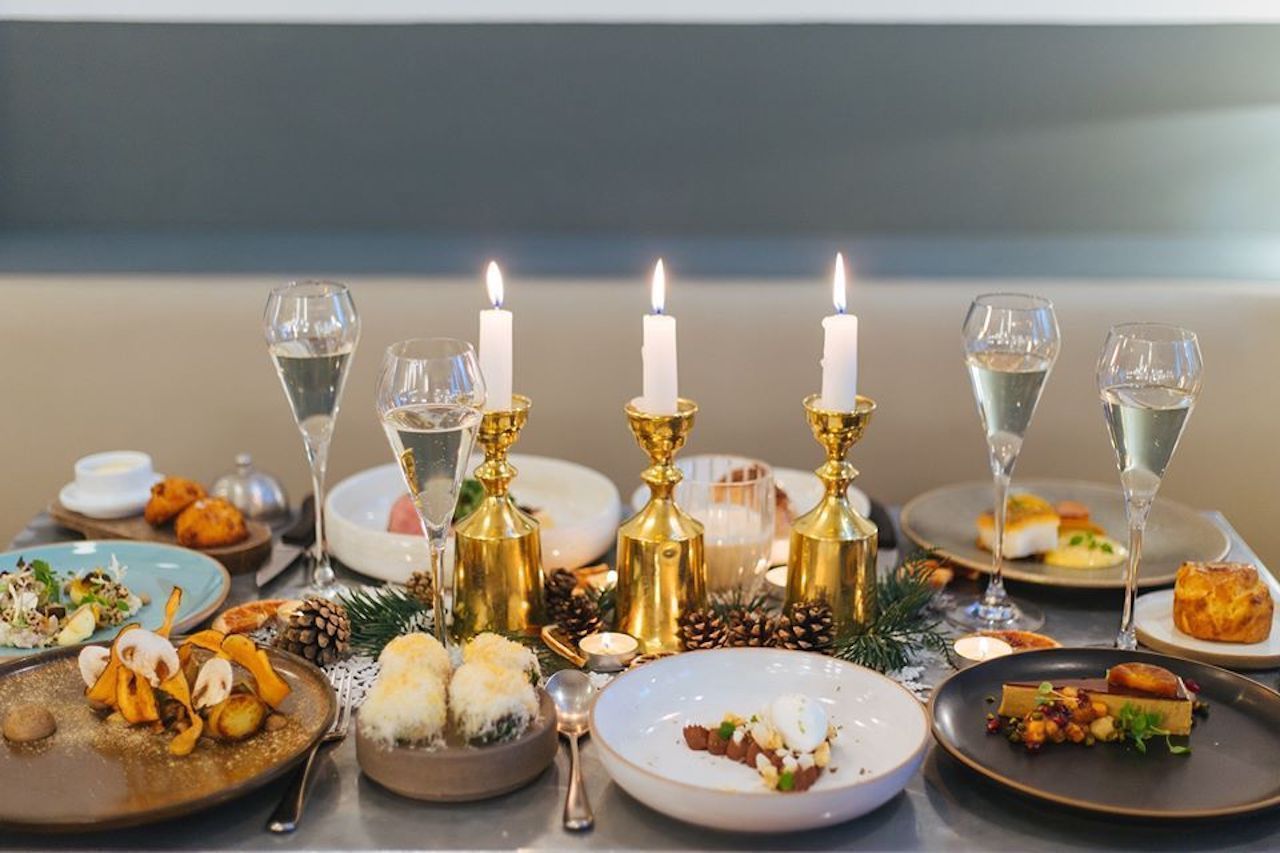 Frenchie $$$ — A gourmet restaurant serving, as the name suggests, high-quality French cuisine. It’s often regarded as one of the best French restaurants in the city. Expect to sample dishes like lamb ragu pappardelle to start. Both the a la carte menu and tasting menu rotates based on what’s in season. 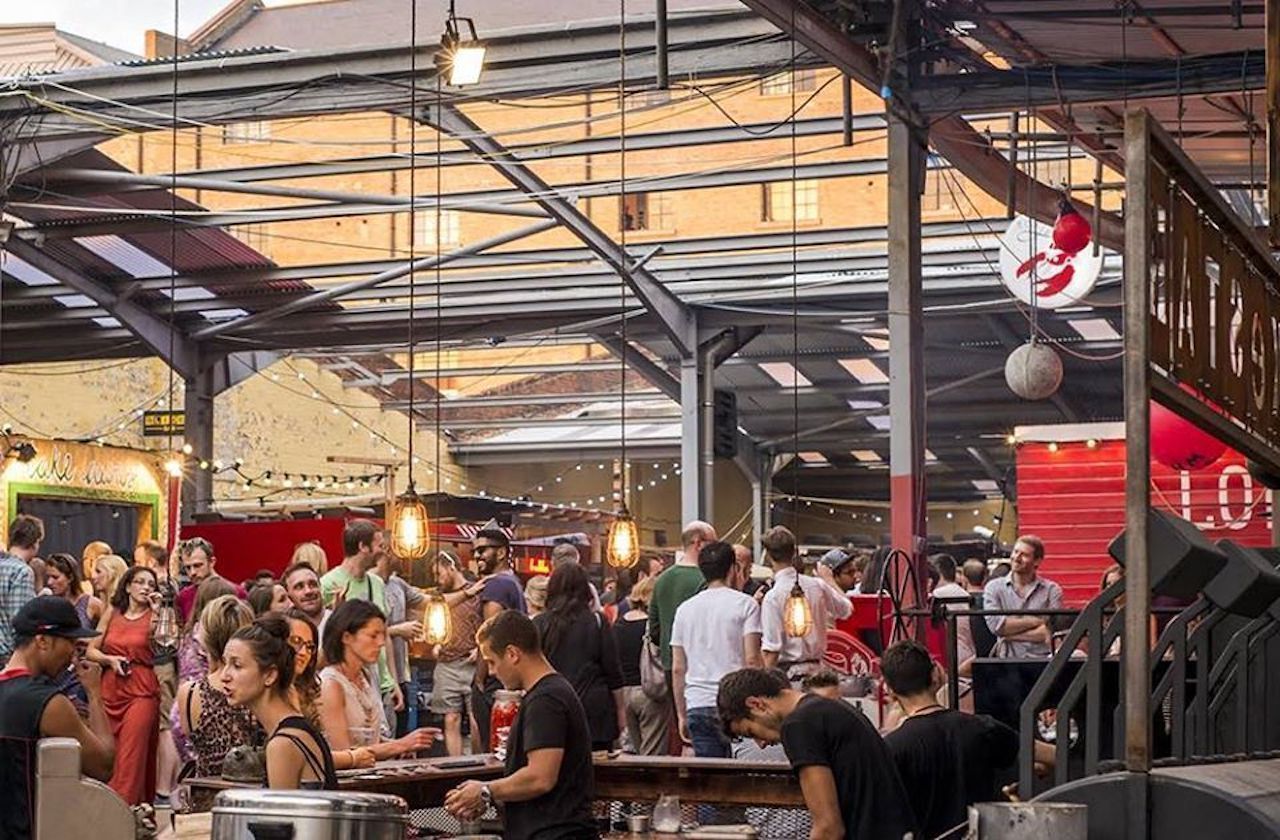 Dinerama $ — Shoreditch’s evening street food market that’s also a perfect way to begin a night out in the city. Ideal for those who want to sample as much of London’s street food scene as possible, Dinerama is open Wednesdays through Saturdays after 5:00 PM. Expect some of the city’s most popular street food vendors, including the Babek Brothers, Yum Bun, and Chin Chin Labs. 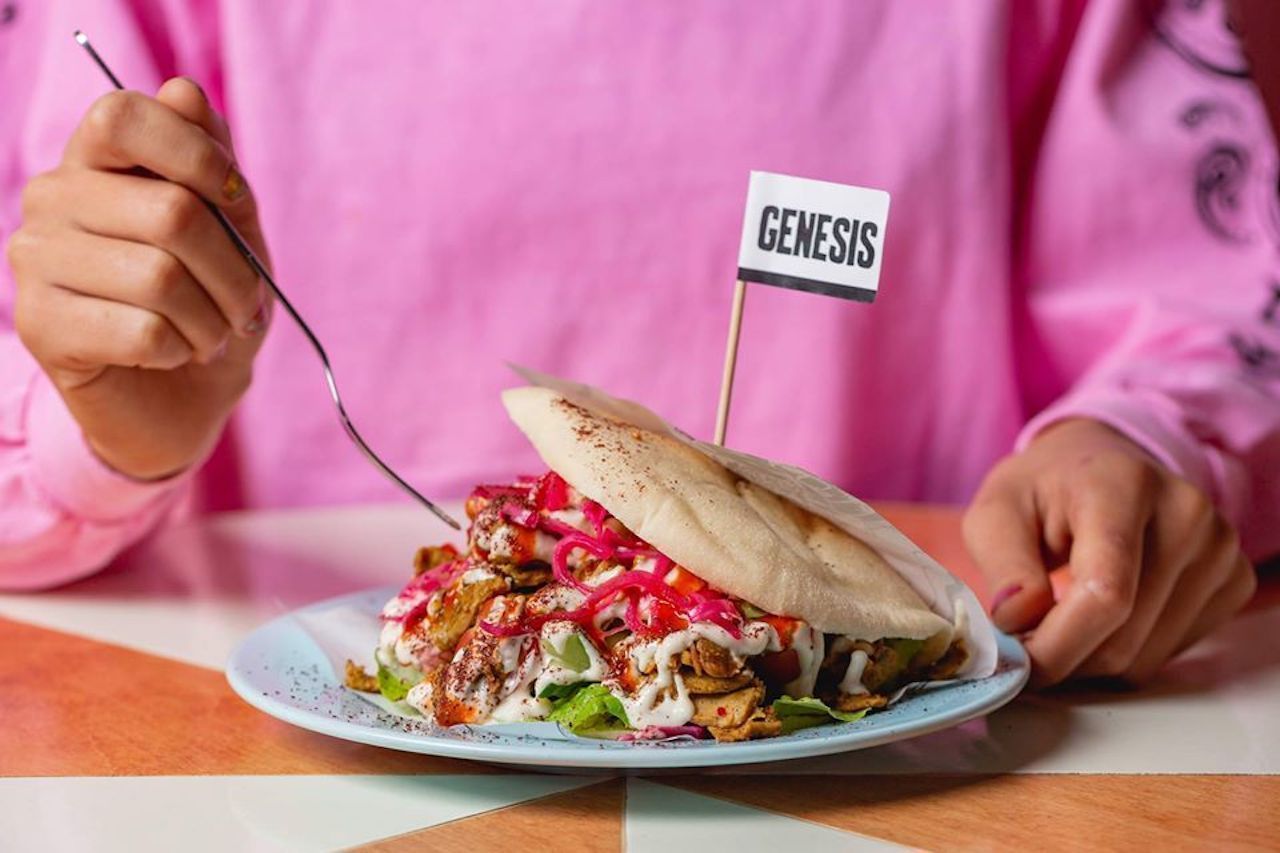 Genesis $$ — Located close to Spitalfields, this trendy fast food restaurant is 100 percent vegan with plenty of gluten-free options. Enjoy breakfast, lunch, and dinner with sumptuous dishes like Korean BBQ wings, hot dogs, tacos, and a side of mac ‘n’ cheese. For vegans with a sweet tooth, the brownie, ice cream sundae, and sticky toffee pudding are a great way to finish. 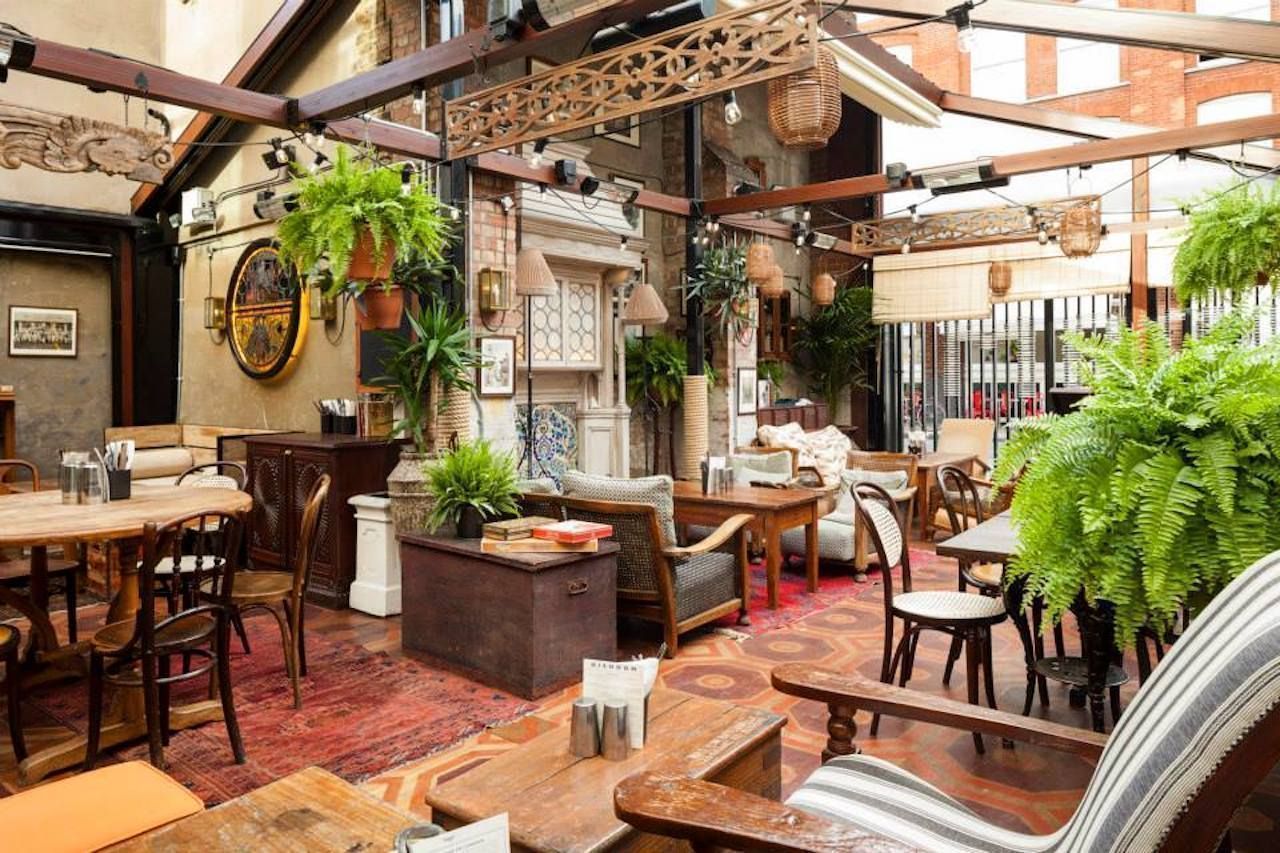 Dishoom $$ — Focusing on traditional Indian food, Dishoom has a slightly more flamboyant branch in Covent Garden, but Dishoom Shoreditch has a laid-back charm with indoor and outdoor dining. Enjoy classic Indian dishes for breakfast, lunch, and dinner with a selection of gluten-free, dairy-free, and vegan menus. Choose from the different curries, biriyani, or items from the grill like masala prawns and paneer pineapple tikka.

The Clove Club $$$$ — This Michelin-star restaurant is Shoreditch’s premium dining destination. Helmed by Scottish chef Isaac McHale, The Clove Club is a balance of fine dining experience with a relaxed atmosphere. Chefs here use fresh seasonal produce from the British Isles, and you can expect an ever-changing tasting menu of British classics like Cornish mackerel, haggis buns, and Orkney Scallops. 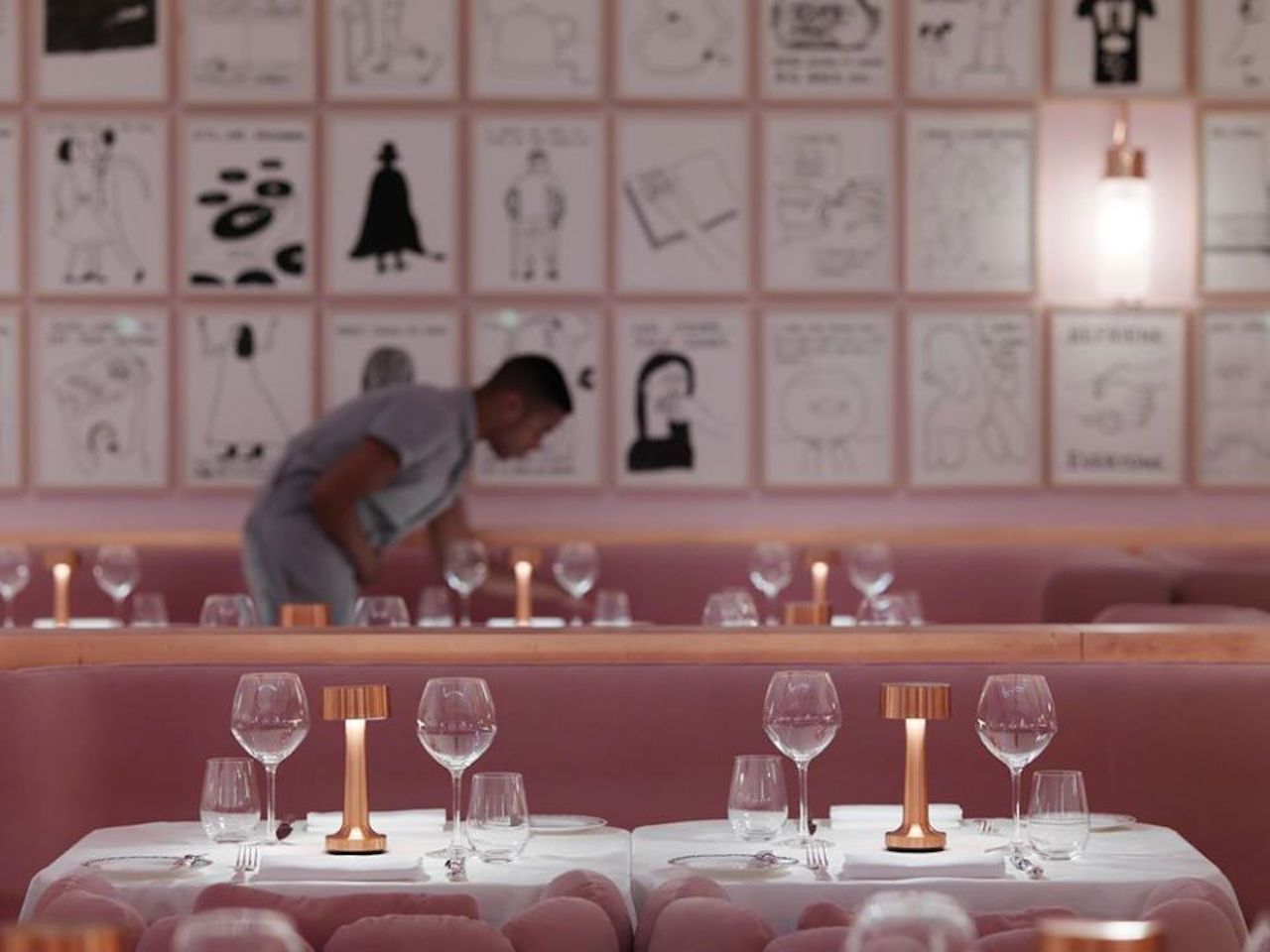 Sketch $$$$ — On the outside, Sketch is a typical London townhouse. On the inside, it’s a mind-boggling maze of creative restaurants and bars. The five rooms each have a theme, like The Glade’s “enchanted decoupage forest” that serves breakfast, lunch, and cocktails. Or The Gallery’s French and British cuisine served in a room filled with David Shrigley art. In The Parlour, find all-day cocktails and live music. Sketch is more than just dining, it’s an experience unto itself.

Gymkhana $$$$ — This restaurant gets its name from the prestigious clubs in India once reserved for the upper classes. The main restaurant is designed to look like a gymkhana of the past with ceiling fans, wall lamps, and vintage booths. There is also a glamorous downstairs bar and a private dining experience for a little more exclusivity. The a la carte menu features Britain’s favorite Indian curries and to-share dishes, like pork cheek vindaloo, lamb shank rogan josh, and Bengali mustard salmon with a chilli lime raita. 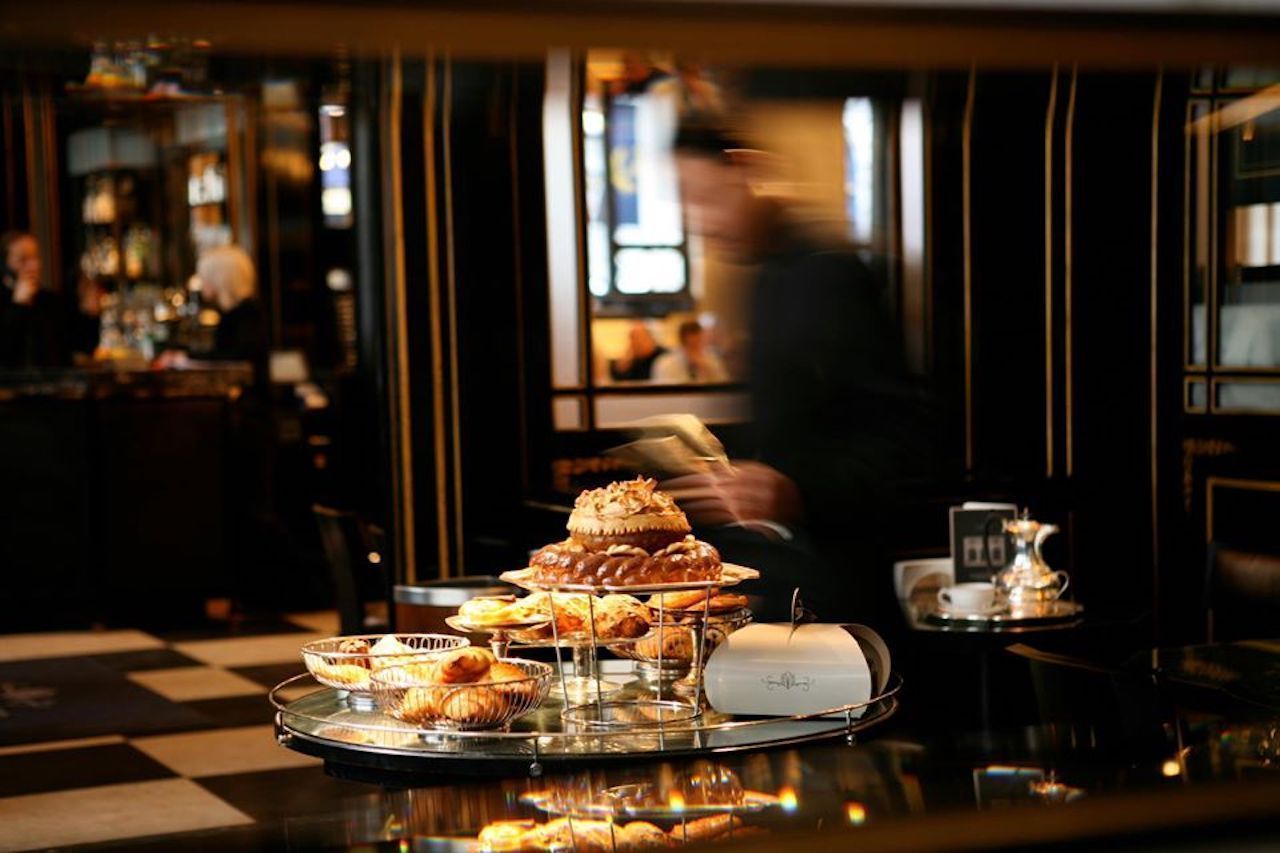 The Wolseley $$$ — A timeless cafe with a grand interior, The Wolseley is the best place to try an English breakfast in style. The Wolesley brings European cafe style to life with remarkable Art Deco designs and a breakfast menu that includes smoothies, barista coffees, and a selection of breakfast specialties like grilled kipper with mustard butter, chickpea socca pancake with peas and broad beans, and salt beef hash with duck egg. 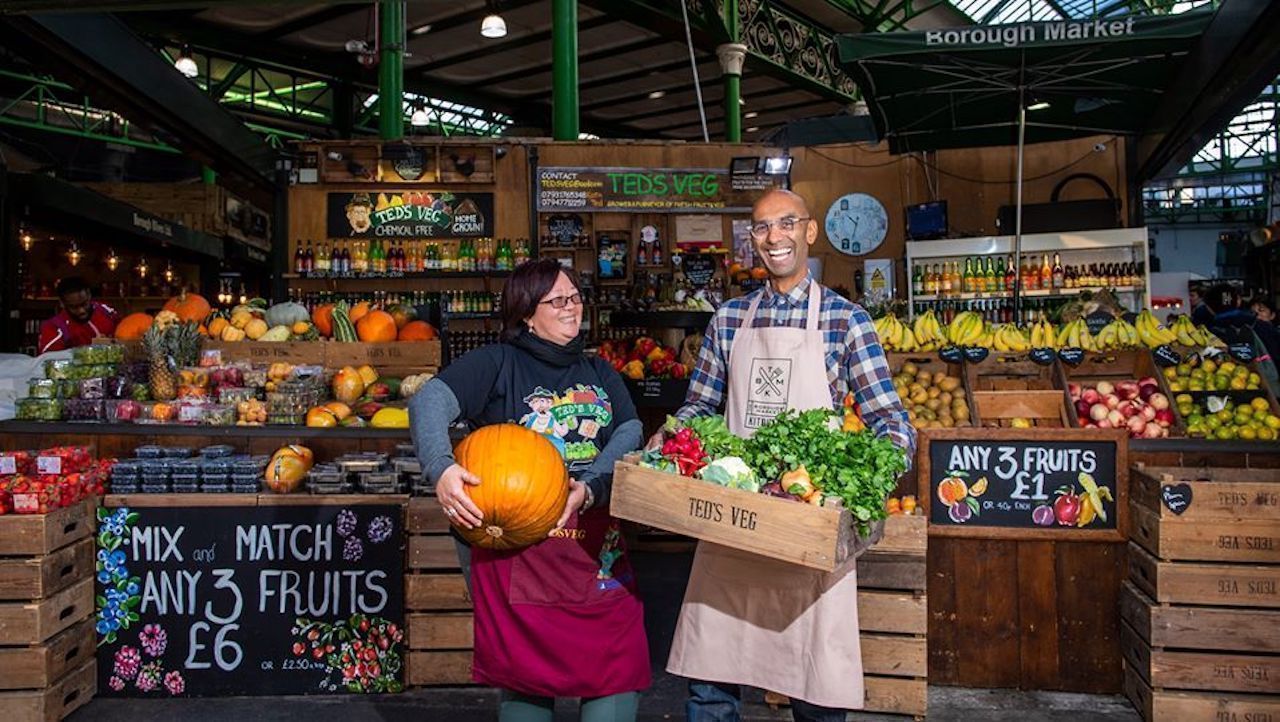 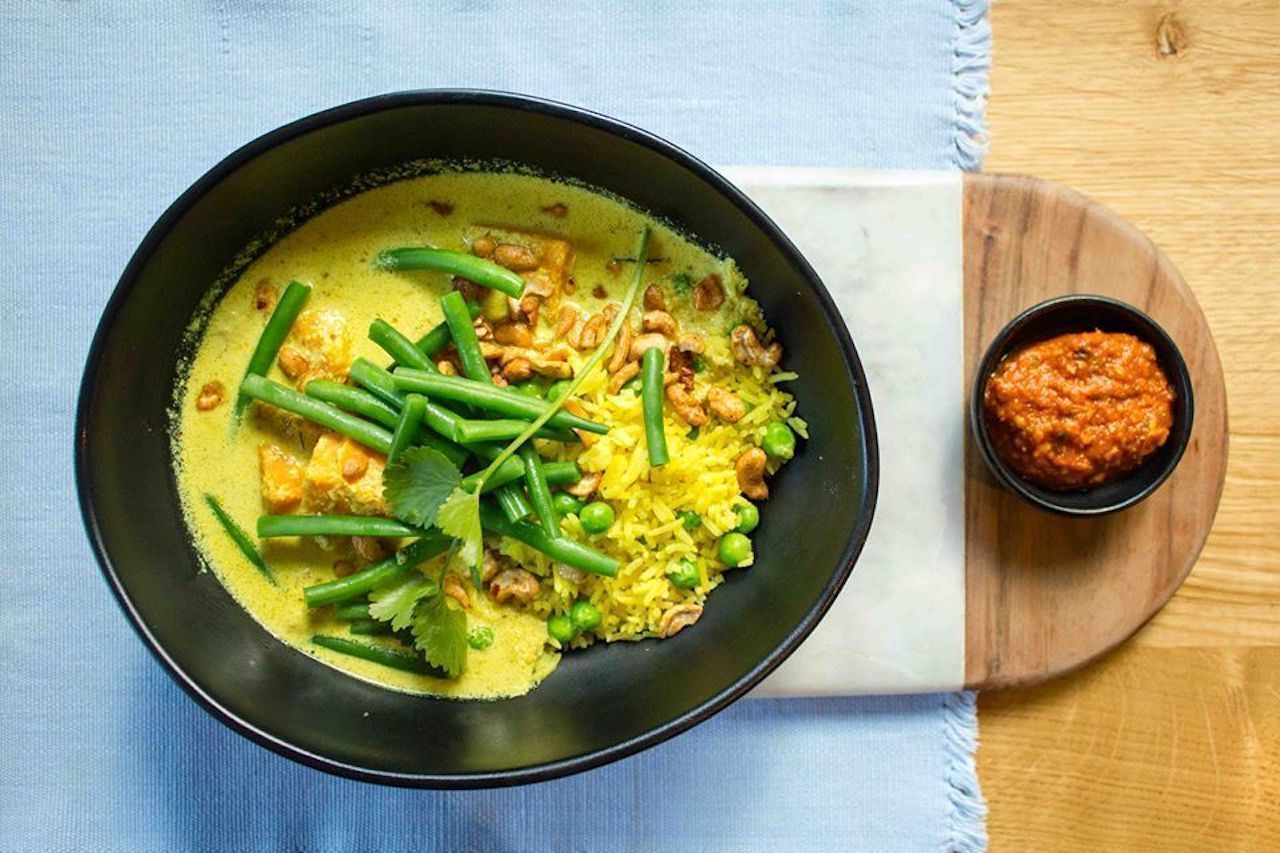 Mildred’s $$ — A vegetarian restaurant that’s a popular local haunt for omnivores and vegetarians alike. With a range of vegan and gluten-free options, Mildred’s is great for groups of friends looking for healthy and satisfying food. The Camden branch is for walk-ins only — perfect for those on a short trip to the city. The menu is full of favorites like tandoori mock chicken and Carribean jerk tofu, as well as vegan desserts like chocolate hazelnut truffle pudding and a caramel cookie cheesecake.

Thanh Binh $ — Opposite Camden’s bustling market, Thanh Binh is a low-key Vietnamese store that also serves great food. The small family-run restaurant has had the same chef and same delicious recipes since 1970. A wide selection of dishes from rice noodles to spicy curries are affordable, and there are plenty of vegetarian options and three set menus at £18 or under. 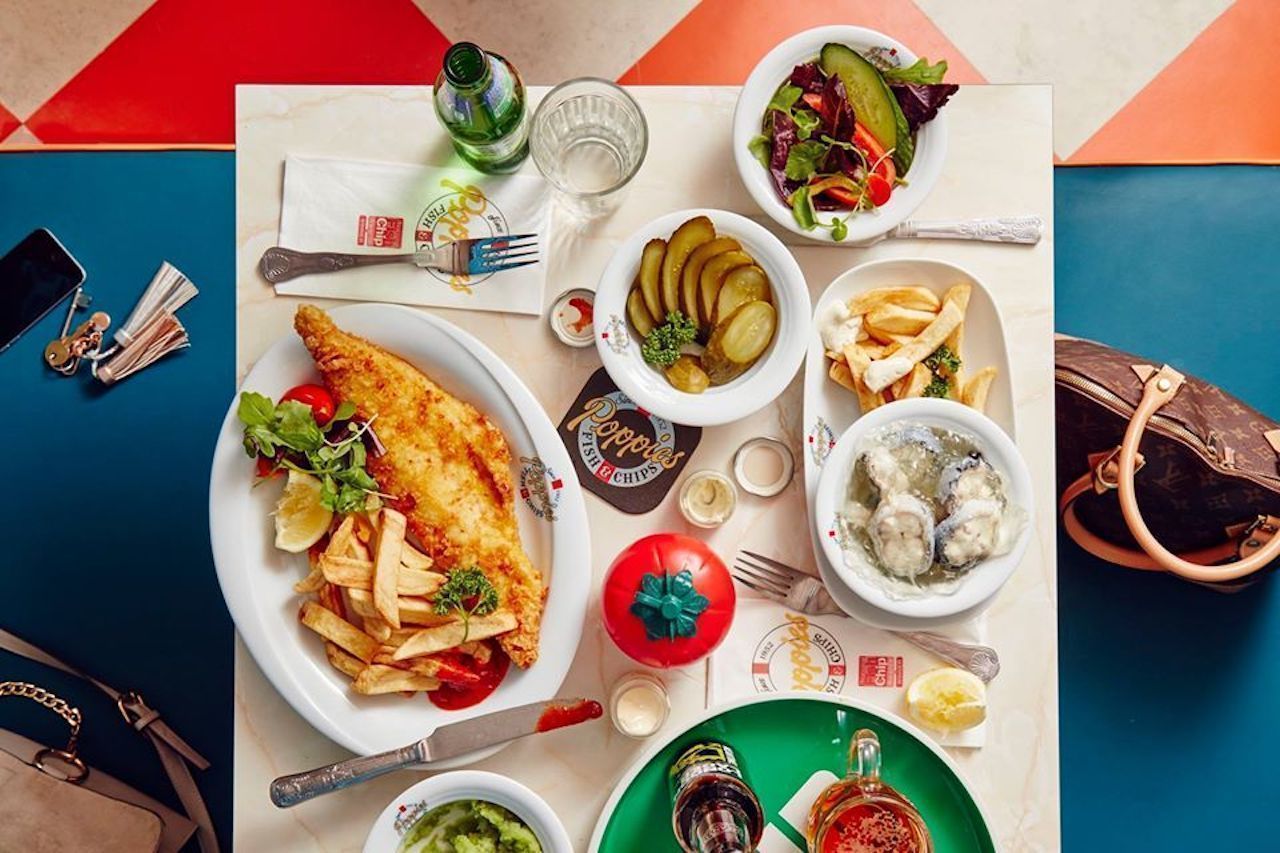 Poppies $$ — No food guide to Britain’s capital city is complete without a fish and chip shop. Poppies, opened in 1952 in Camden, is one of the city’s most popular chippies. The staff here still wear uniforms that look like they’ve just walked out of the 1950s, and the interior is filled with memorabilia. The food, however, is progressive with fish caught earlier in the day by local fishermen. Choose from an extensive menu of British favorites and fish shop specialties like jellied eel, wholetail scampi, mushy peas, and, of course, cod or haddock with chips.

Ma Petite $$ — Serving Jamaican delicacies, Ma Petite is a small but vibrant diner with creative rum cocktails and plenty of spice. Choose from jerk chicken, curried goat, and fish escovitch with a selection of sides like tasty dumplings and rice and peas. 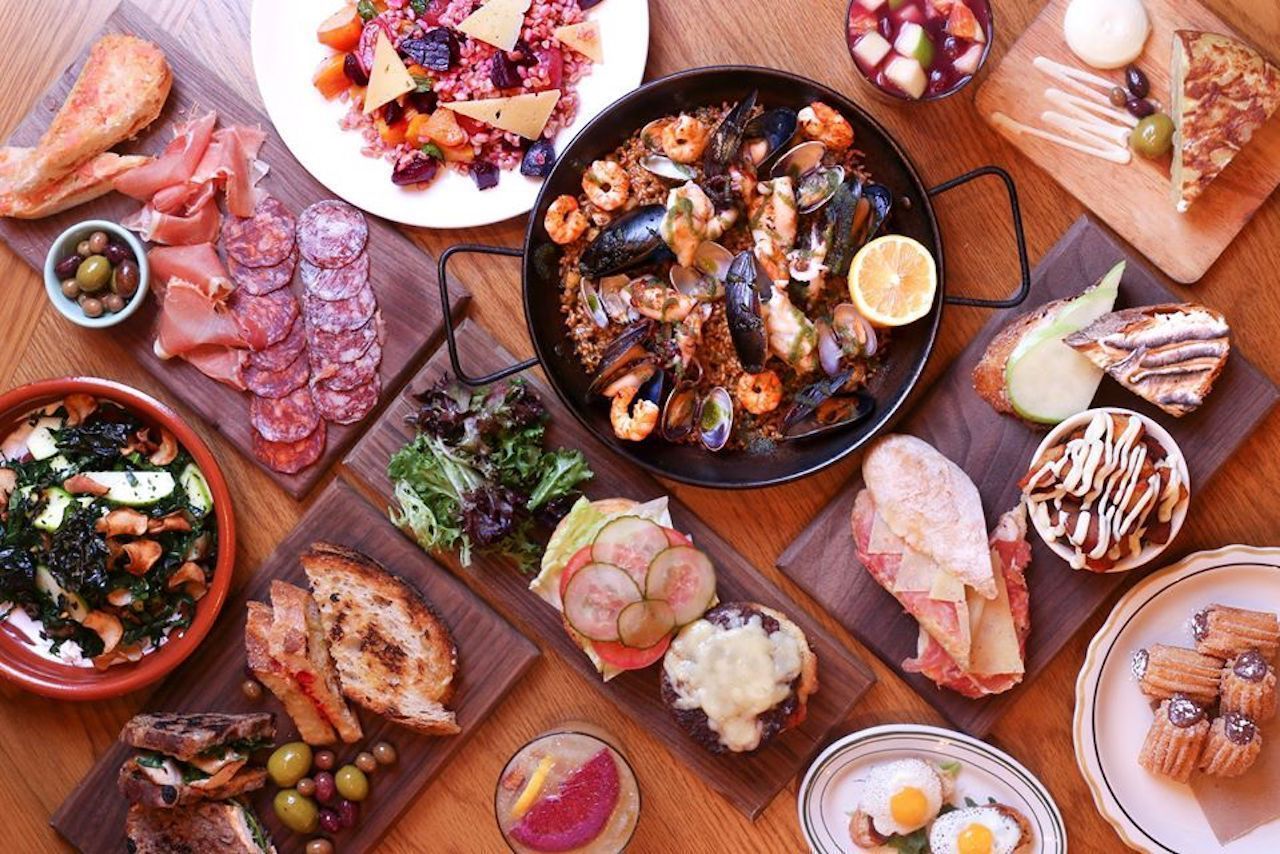 Boqueria $$ — Located on Acre Lane in Brixton, Boqueria is a Spanish tapas restaurant. It gets its name from a market in Barcelona and is always busy with Brixton locals. Here, you’ll find a wide variety of Spanish favorites like tortilla Espanola, patatas bravas, and calamare a la romana. There are also plenty of meat, seafood, vegetarian, and gluten-free options to choose from.

Naughty Piglets $$ — Run by husband and wife team Joe and Margaux Sharratt, Naughty Piglets is a trendy restaurant with a focus on local seasonal food and small-production, low-intervention wine. Though the menu changes to suit the ingredients, expect to find combinations like roast cod with asparagus and butter sauce, or raw beef with coffee, sorrel, and spring greens. 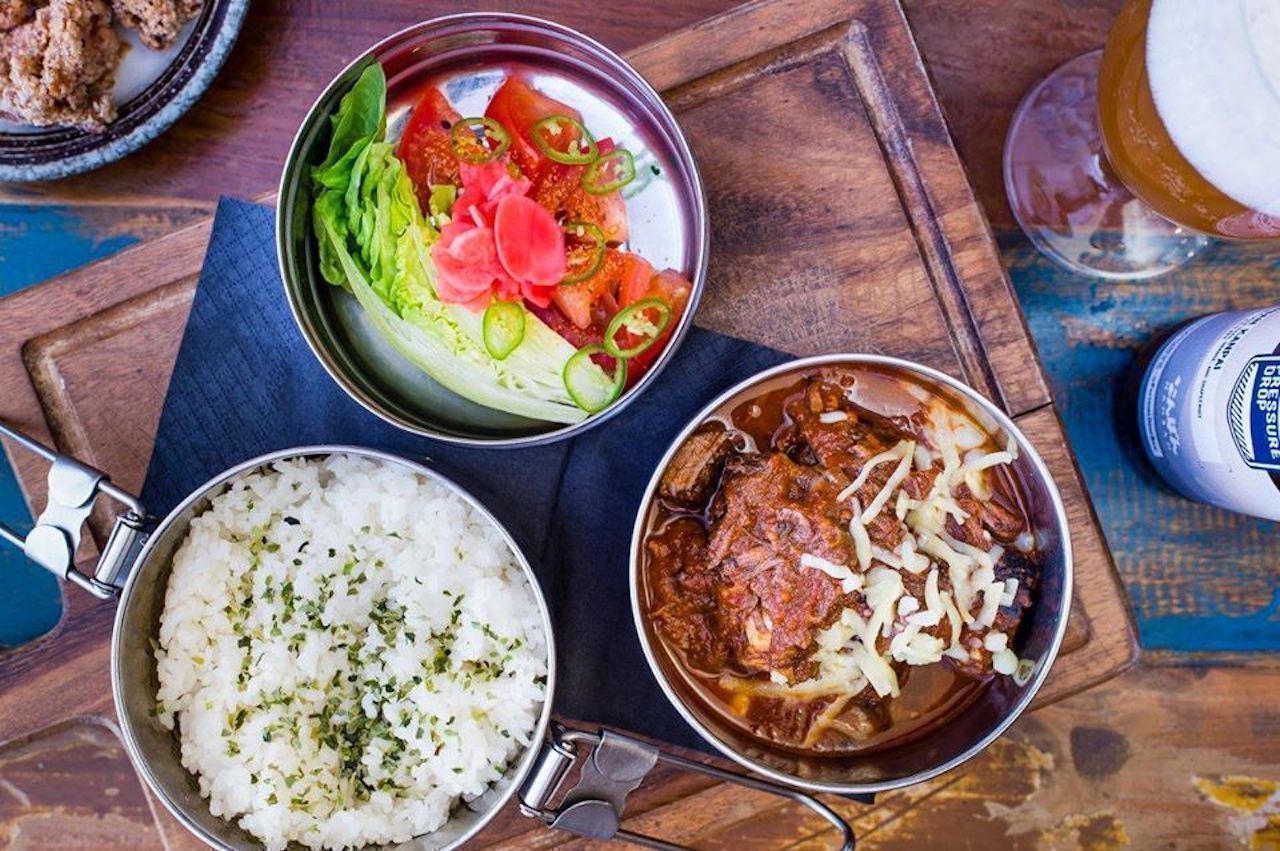 Nanban $$ — A modern spot for Japanese soul food. Nanban means “southern barbarians” and is a reference to the first Europeans to reach Japan. This quirky restaurant embraces the term and serves Japanese dishes with international origins. There are options like calamari tempura, Tokyo modern ramen with beef and pork broth, and a tea-stained egg. Open for lunch, dinner, and takeaway, the restaurant makes the most of its food hall location by sourcing the majority of its ingredients from Brixton Market.

Fish, Wings & Tings $ — Brixton Village, in the heart of the neighborhood, is brimming with trendy places to eat. Fish, Wings & Tings is one of those places. This low-key yet colorful Caribbean restaurant has an exciting menu of jerk chicken, curried mutton, split pea fritters, and a prawn roti. Wash it all down with some homemade ginger beer and watch Brixton’s bustling market go about its business. 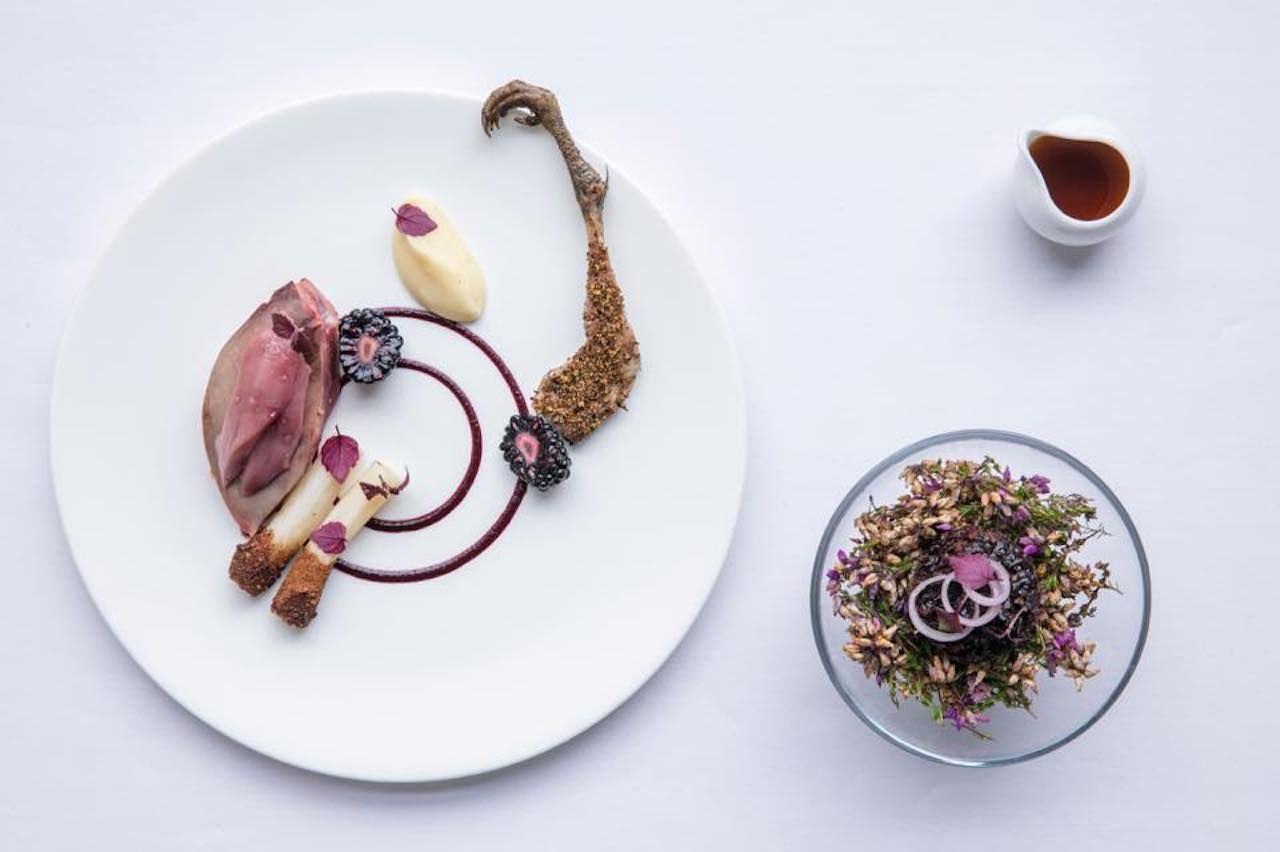 Launceston Place $$$$ — A luxurious restaurant situated in London’s affluent borough of Kensington, Launceston Place provides the ultimate fine-dining experience in the capital. The menu focuses on classic European cuisine and has received a number of awards for its wine selection. Head chef Ben Murphy has put together some wonderfully crafted tasting menus, including a vegan tasting menu. On the a la carte menu, there are options like pigeon, milk-fed lamb, and pistachio souffle.

Sticky Fingers $$ — Situated among the upmarket boutiques on High Street Kensington, Sticky Fingers is a family-friendly restaurant serving up American favorites like baby back ribs, barbecue chicken, burgers, and sizzling fajitas. It embraces London’s rock ‘n’ roll heritage with music memorabilia plastered across the walls (to be expected as it was opened by Bill Wyman of Rolling Stones). Leave room for dessert because Sticky Fingers knows exactly how to perfect a sweet treat with toasted marshmallow cheesecakes and the restaurant’s famous freakshakes. 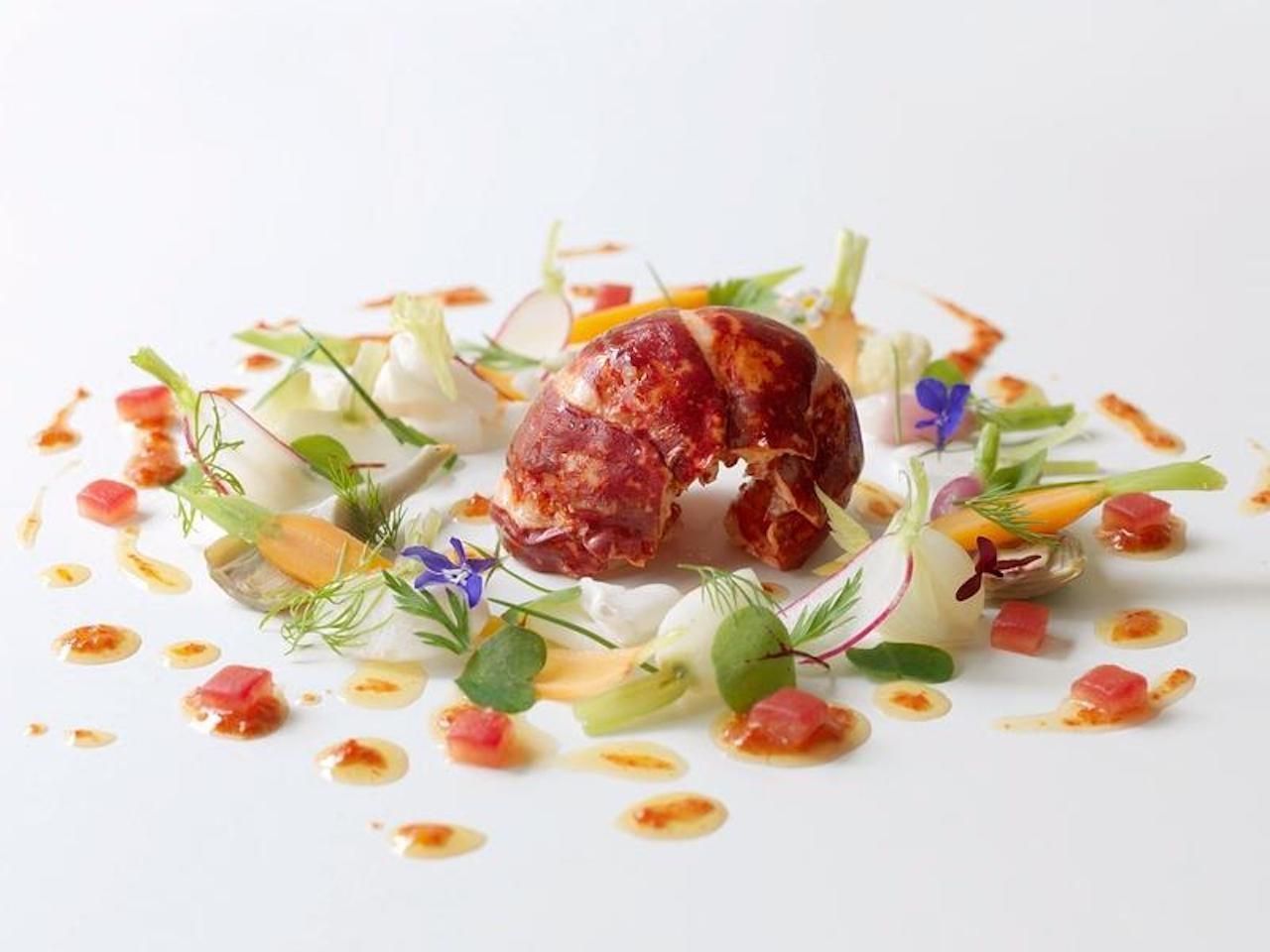 Peggy Porschen $$ — Enjoy fancy cakes in a pretty setting at Peggy Porschen. This highly respected cake shop has two branches, one in Chelsea and one in Belgravia. Adorned with a beautiful flowery pink facade, this little shop is easy to spot. The Chelsea branch is designed to look like an English rose garden and is open for breakfast, brunch, and lunch. Here, you’ll find a wide selection of teas and sweet treats, including Peggy’s famous cupcakes, layer cakes, pastries, and a handful of vegan options.