No city knows how to party quite like London. There are bars, pubs, and clubs — in short, a little something for everyone. Whether you’re looking for a traditional British pub, the city’s LGBTQ scene, quirky hangouts, karaoke joints, rock ‘n’ roll events, world-class DJs, or trendy rooftop bars, you will find it. London has a diverse cultural history, and with it comes a nightlife you won’t forget.

These are the best places to drink in London’s most popular neighborhoods. 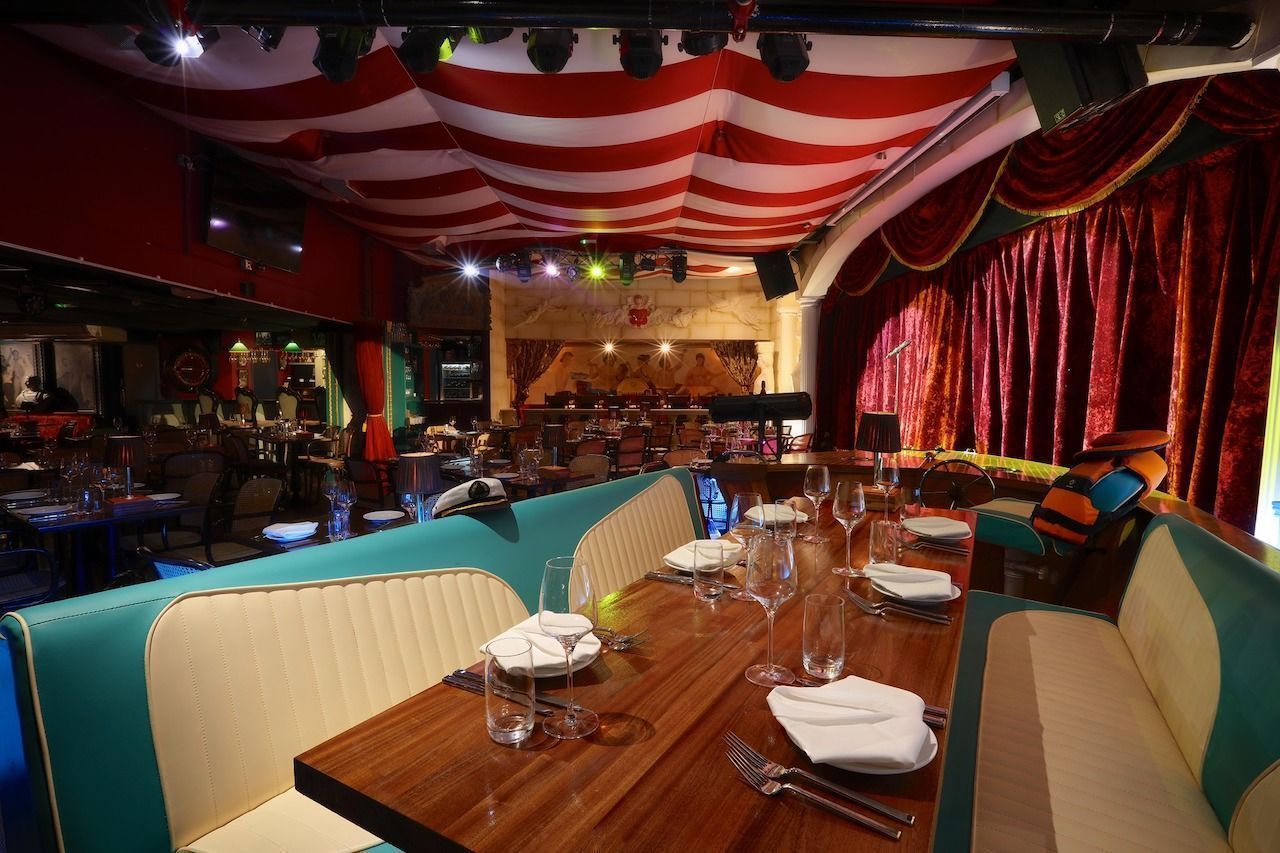 Bunga Bunga $$$ — With delicious Italian food, plenty of drinks, and a variety of live entertainment, Bunga Bunga is everything you need for a great night out. Shows run most days, and West End Wednesdays involve dinner, live music, and karaoke. Most other shows start at 7:00 PM and include a meter-long pizza, creative cocktails, and a night of burlesque, circus, and dance acts.

Punch & Judy $$ — Located in a prime position above Covent Garden Market, Punch & Judy is a landmark pub with a long cultural heritage. This pub has been going strong since 1787 and is named after Britain’s popular puppet performances. Here, enjoy the best views of Covent Garden’s public shows while drinking something from Punch & Judy’s menu of beers, wines, cocktails, and bar snacks. 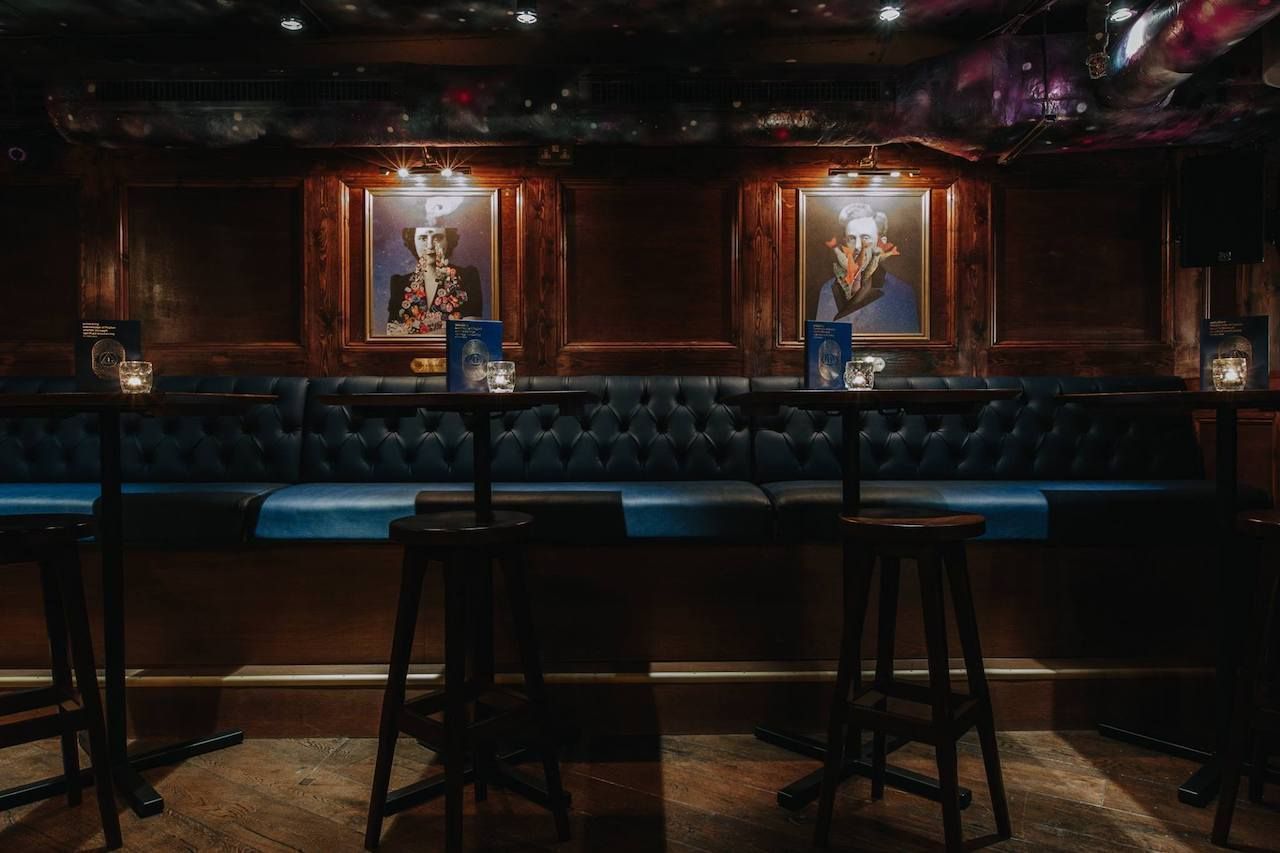 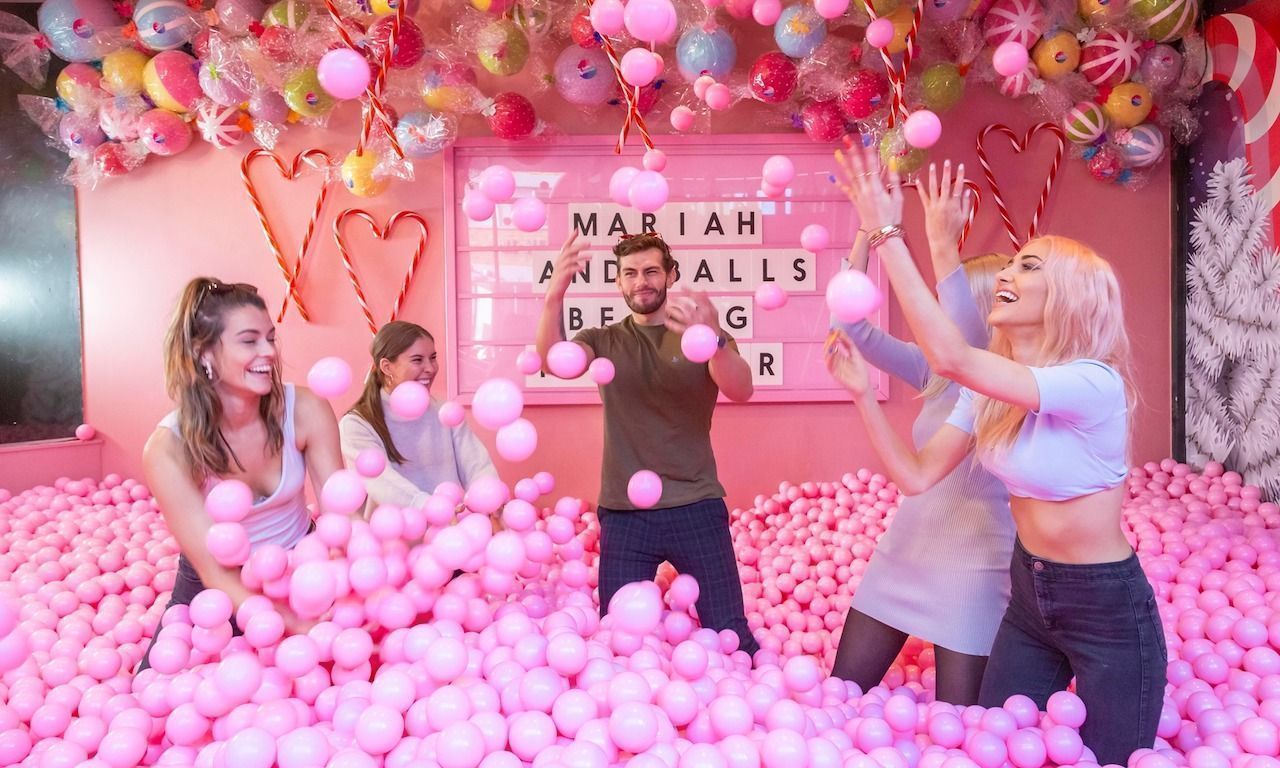 Ballie Ballerson $$ — If you’ve ever felt a little jealous of the kids when you see a playground or jungle gym, then Ballie Ballerson is the place for you. The bar has an adults-only ball pit where you can dive into a pool of a million balls and dance to music with friends. There’s also face painting, retro-inspired cocktails, and good tunes. The bar’s cocktail menu is just as exciting as the ball pit with cool names and Insta worthy drinks. Harry Potter fans can enjoy the You’re A Wizard Harry, which is served with a red diamond ice cube, while Britney Spears fans can opt for Hit Me Baby One More Time, served with a 1990s-style scrunchie.

Flight Club $$ — Darts is a hugely popular game throughout the UK, with everything from national competitions to laid-back pub tournaments. If you want to try a British sport whilst drinking beer and eating comfort food, head to the Flight Club in Shoreditch. Team up with a group of friends for your very own darts booth complete with table service and electronic scoring. There are a variety of games to choose from, and staff is always on hand if you need some inspiration. 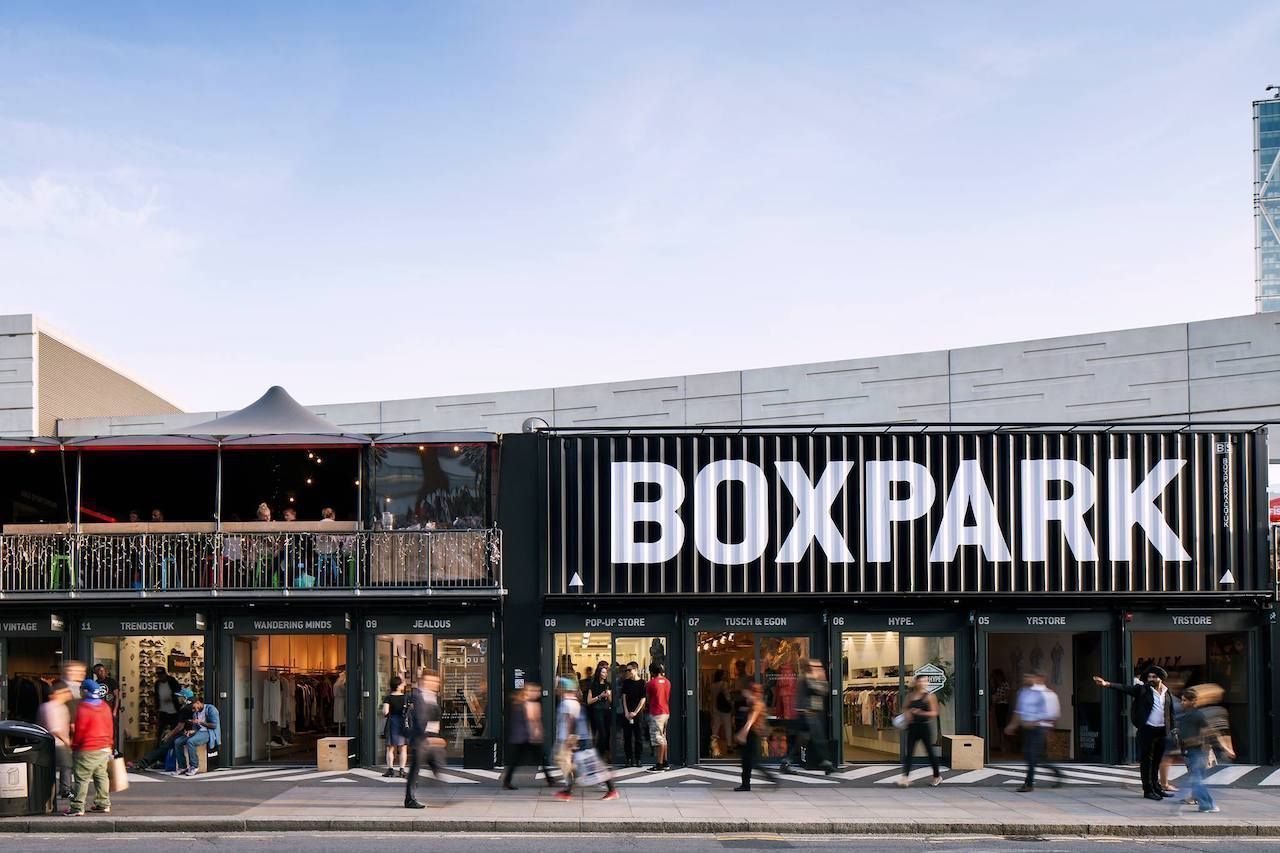 Boxpark $ — This collection of shops, restaurants, and bars are housed in shipping containers stacked on top of one another. In the evening, it comes to life with office workers, tourists, and party-goers looking for cheap food and drink. There are also lots of events throughout the year, including sports screenings, concerts, and DJ nights. 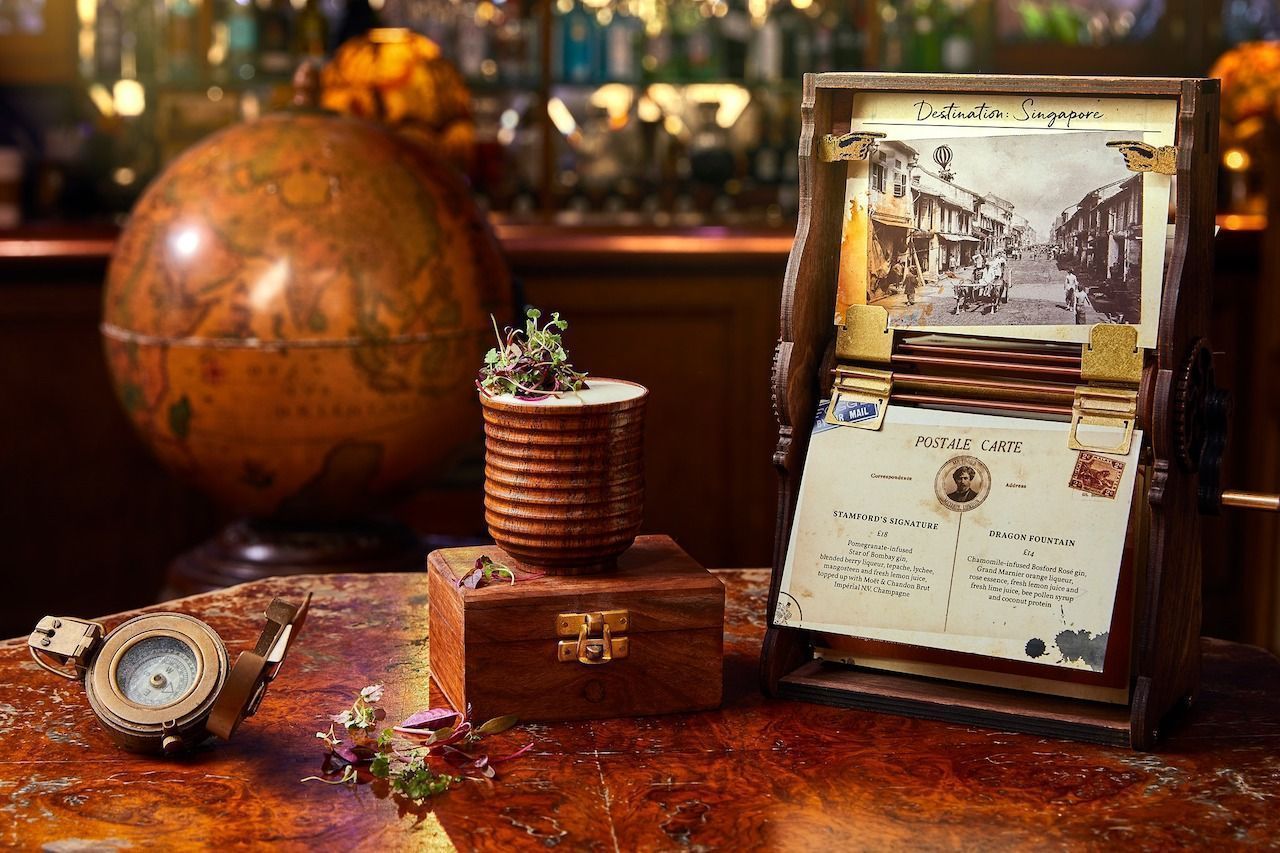 Mr Fogg’s Residence $$$ — Inspired by the novel Around the World in 80 Days, Mr Fogg’s Residence is a chic cocktail bar with an old-world charm. It’s an unusual and unforgettable place to enjoy a cheeky beverage or two. The spot is designed as the home of fictional character Phileas J. Fogg and has weird and wonderful memorabilia from his travels. There’s an extensive cocktail menu with a story and destination behind every drink, and a variety of events including a cockney sing-a-long held every Tuesday.

Tape $$$ — A famous Mayfair nightclub, Tape is for those who want to party through the night. The club is a popular hotspot for celebs and A-listers who visit the capital, and the best way to guarantee entry for the rest of us is to book a table. Once inside, the club hosts world-famous DJs and artists that have included Lady Gaga, Justin Bieber, and Rihanna. 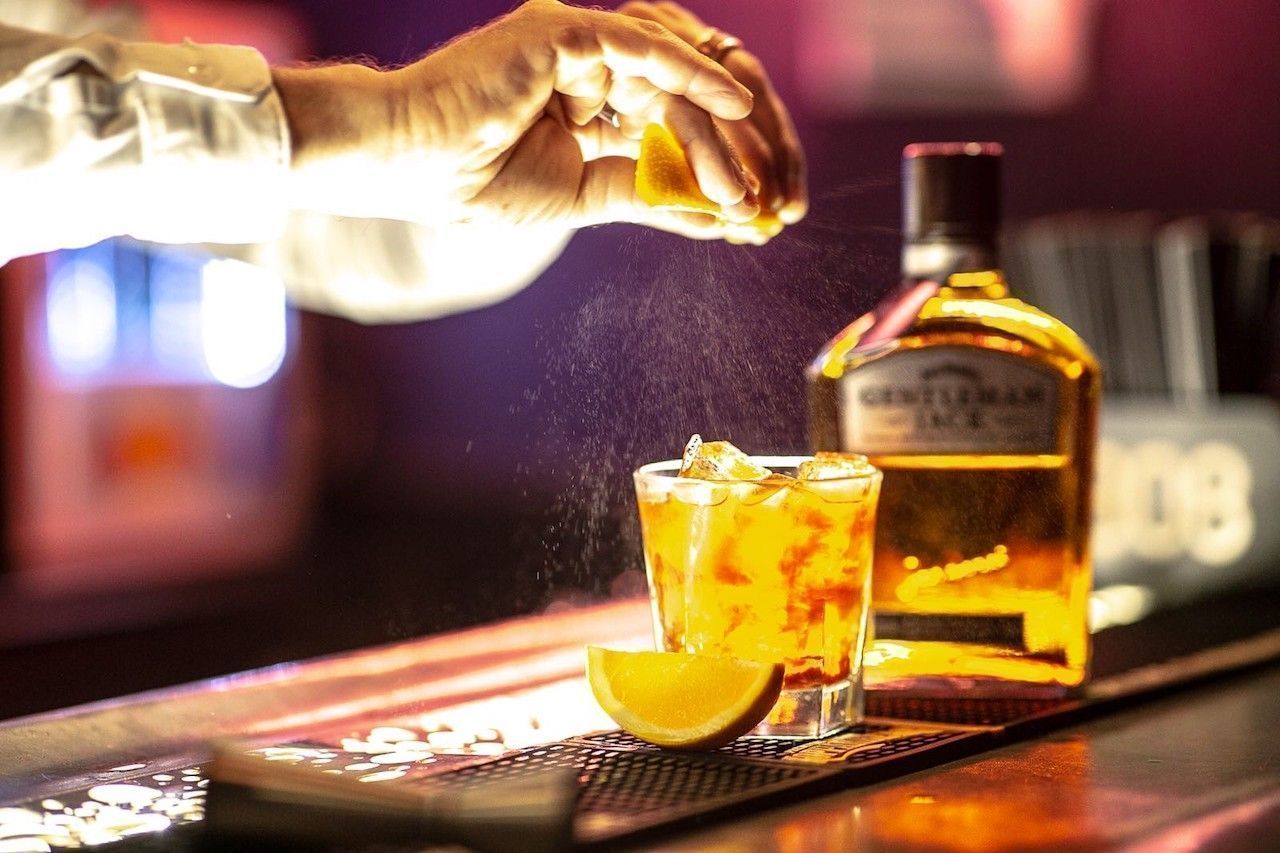 XOYO $$ — Spanning two floors, XOYO is a recently refurbished nightclub located on Old Street. This club is an East London favorite with a range of events, a house DJ, and album launch nights. 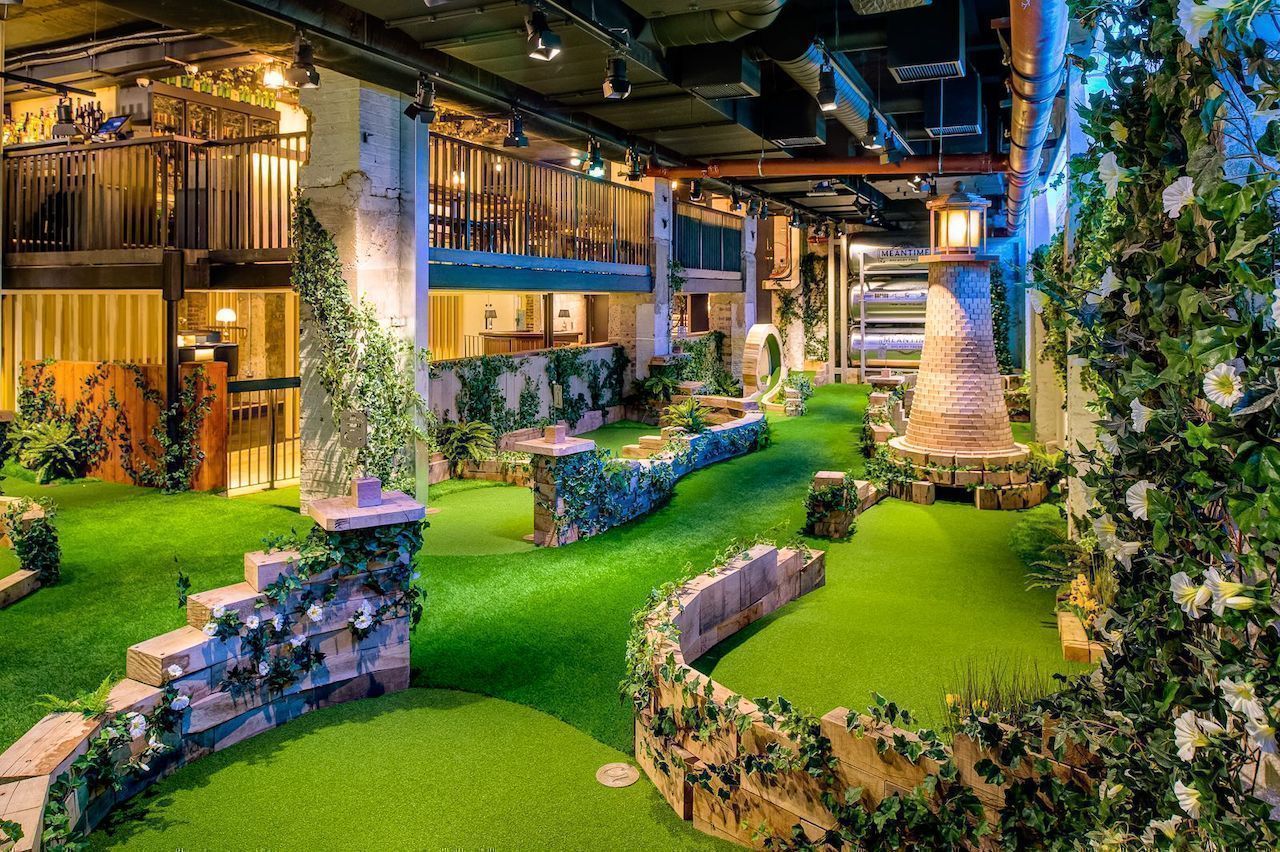 Swingers $$ — Located just off Oxford Street, this destination has a crazy golf course, bar, and food stalls. The cutesy retro-themed bar serves fine wines, beer, cocktails, and premium spirits, which are all available to order as you play. There are also four popular food outlets, including Patty and Bun and Breddos Tacos.

Ronnie Scott’s $$$ — The jazz scene in London may be fairly small, but visitors can expect high-quality venues. Ronnie Scott’s is a jazz bar that’s been showcasing world-renowned musicians since 1959. The club also has its own dining menu with a la carte dishes and tasty items from the grill. 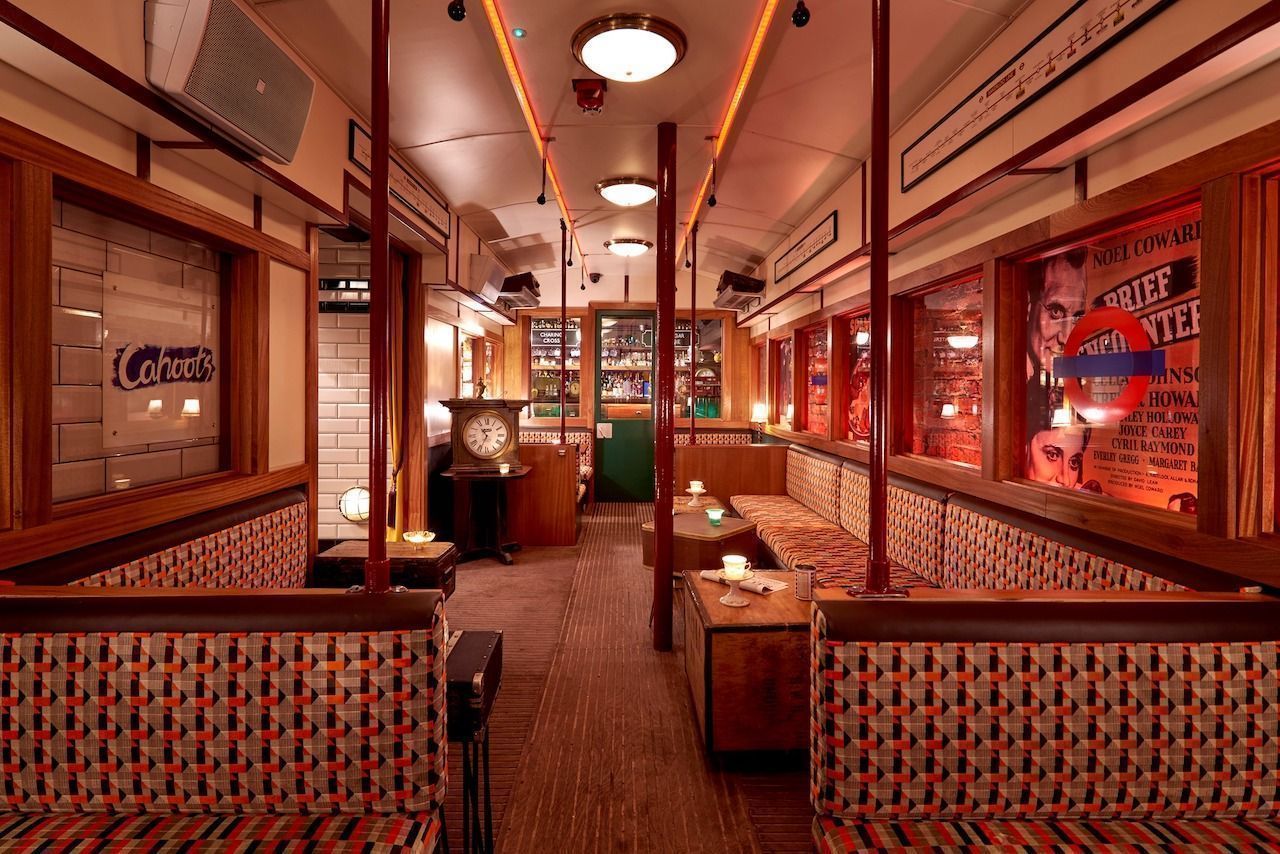 Cahoots $$$ — Step back in time to the 1940s at this themed bar that’s set in an old train station. Cahoots invites you to put on your finest 1940s outfits and get ready for a night of good food, dancing, and live entertainment. In keeping with the theme, cocktails are served in milk bottles, teacups, and tin cans. Live music, swing dances, and vintage DJs are also on hand to see you through the night. 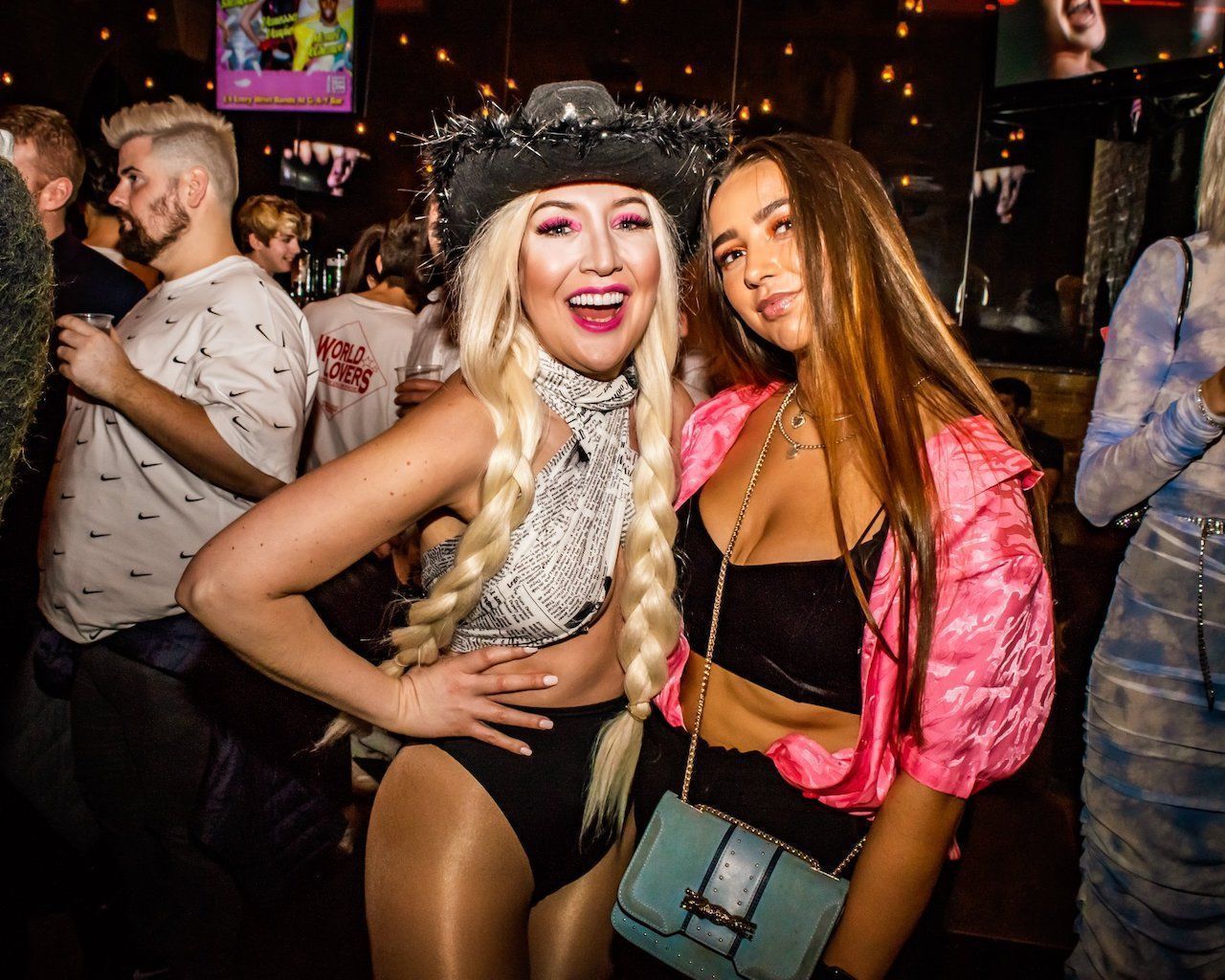 G-A-Y $$ — London’s largest gay bar is spread across three floors. This club is a great place for a fun night out dancing to popular party tunes until the early hours of the morning. There are also occasional concerts and live performances. 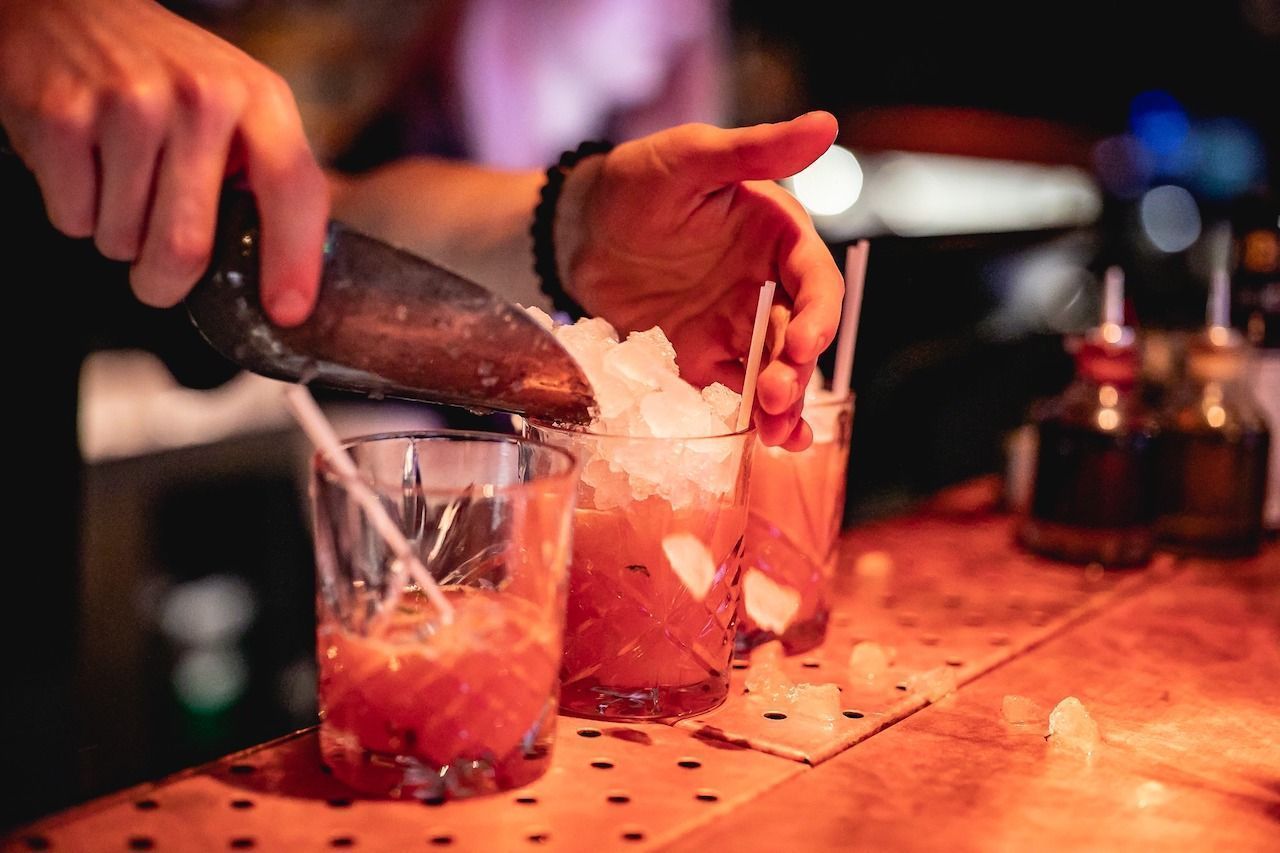 Blues Kitchen $$ — With one of London’s largest bourbon collections and live music every night, the Blues Kitchen in Camden is a great place to hang out after a busy day of sightseeing. This popular joint is all about the music, with blues and soul blasting out morning, noon, and night. The food is Texas-inspired, and there are live DJs and a fantastic selection of world-class acts every weekend that fill up the dance floor until late.

Electric Ballroom $$ — Electric Ballroom is a longstanding events venue and nightclub that’s been entertaining visitors since 1938. It has an array of exciting club nights with unique themes when it’s not hosting concerts. Expect everything from rock music to grime, but no matter the theme, there are affordable drinks and tickets.

The Underworld $$ — If you know your metal from your punk, rock, and indie, you will appreciate this famous entertainment venue. Upstairs, you will find World’s End, a well-known pub in London. Head downstairs to Underworld for live music that will blow your mind. Artists that have previously graced the stage include Radiohead, Placebo, and the Cranberries. 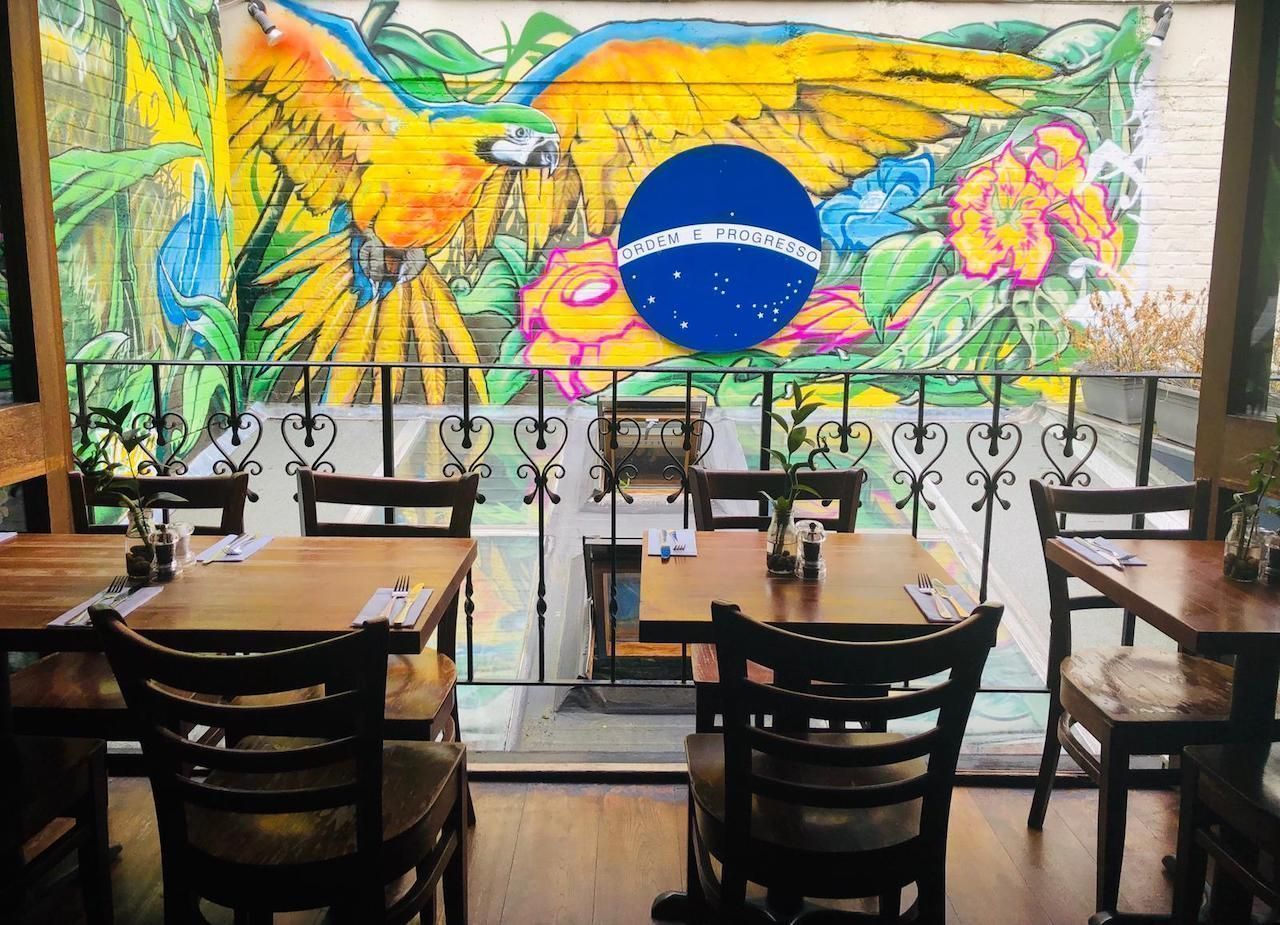 Made in Brasil $$ — Designed like a tropical shack, Made in Brasil is a great place to head for casual drinks that pack a lot of flavor. This vibrant restaurant and bar is a popular one with Camden’s locals. Downstairs is the Copacabana Beach Bar, which often plays samba and Latin tunes. When it comes to drinks, there’s a wide selection of cocktails, shooters, wine, and beer, plus some great deals at happy hour. 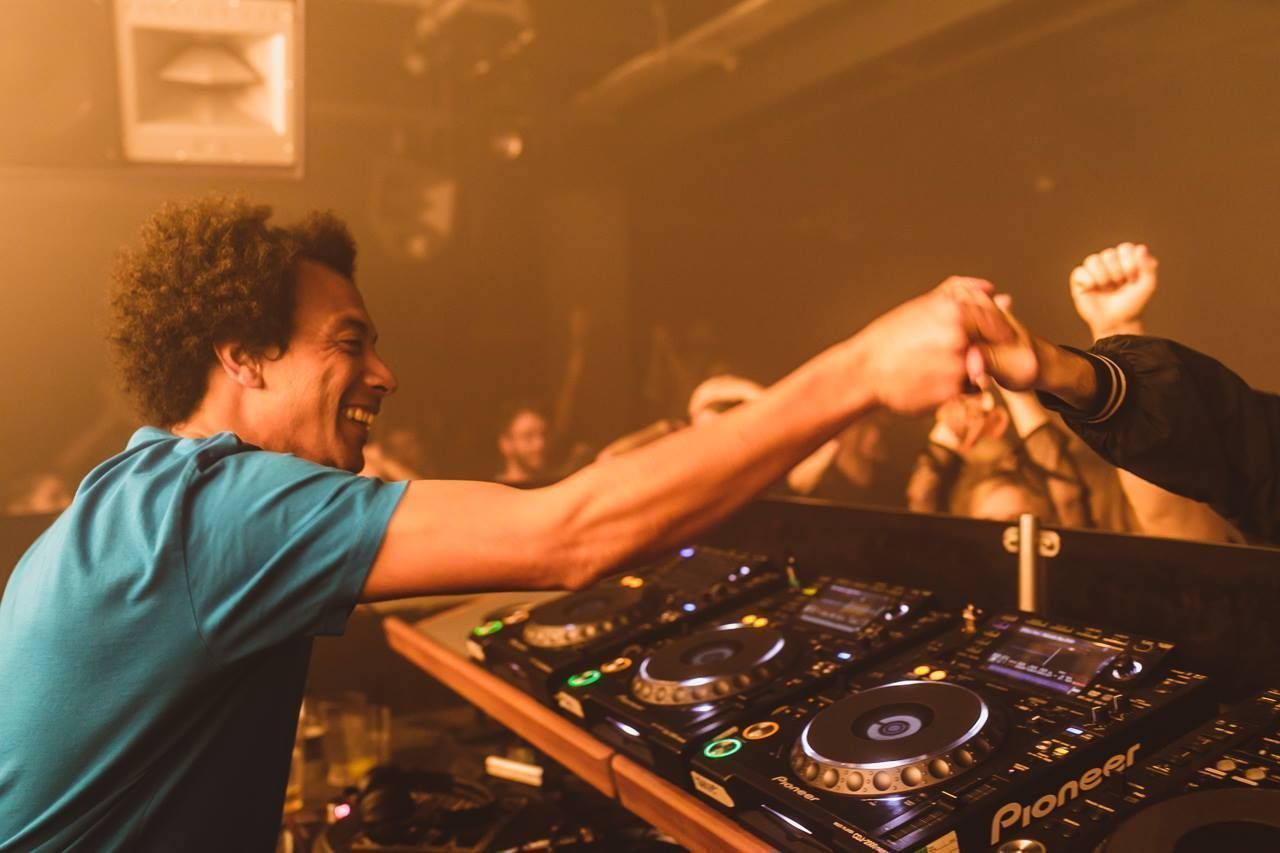 Phonox $$ — Having opened its doors in 2015, Phonox is a fairly new destination in London’s clubbing scene, but it quickly built a big reputation. This club is all about the basics: music, drink, and a good time. Unlike London’s other super clubs, this place only has one dance floor with one resident DJ controlling the night. There are plenty of guest performances, and the music is always changing between house, disco, and drum ‘n’ bass.

The Beast of Brixton $$ — While the entrance is a modest one behind a generic door and up a generic staircase, inside at The Beast of Brixton, you’ll find a house party that never stops. The music spans two floors, and the bar is home to top-notch mixologists who serve up delicious cocktails. The Peach Jam Sour (Canadian Club whiskey, lemon juice, egg white, iced tea, and, of course, peach jam) is a favorite. There are also four Brixton-based ales and plenty of spirits to get your night off to a good start. 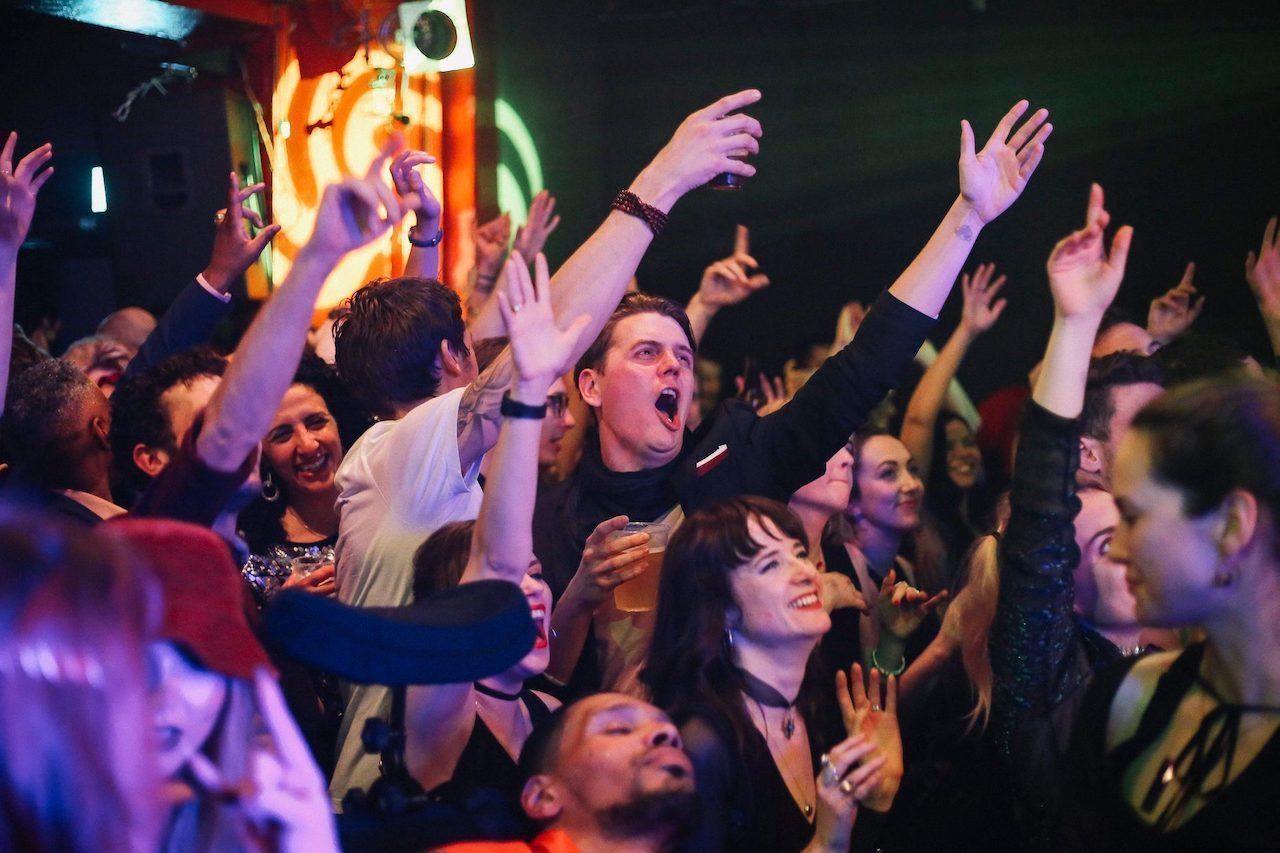 Hootananny $ — The Hootananny in Brixton is a family-run club and pub with a huge following of Brixton residents. Located in a Victorian pub, guests can chill out in the beer garden before heading to the stage for live music. Reggae Thursdays is a fun night out with live bands, a sound system, and a delicious Carribean food stall.

The Crown & Anchor $$ — When in London, you can’t miss out on a traditional British pub. Head to The Crown & Anchor for good beer, pub grub, and casual chit chat with the locals. It was voted as one of the UK’s best pubs and features 25 taps of craft beer, local brews, and cider. 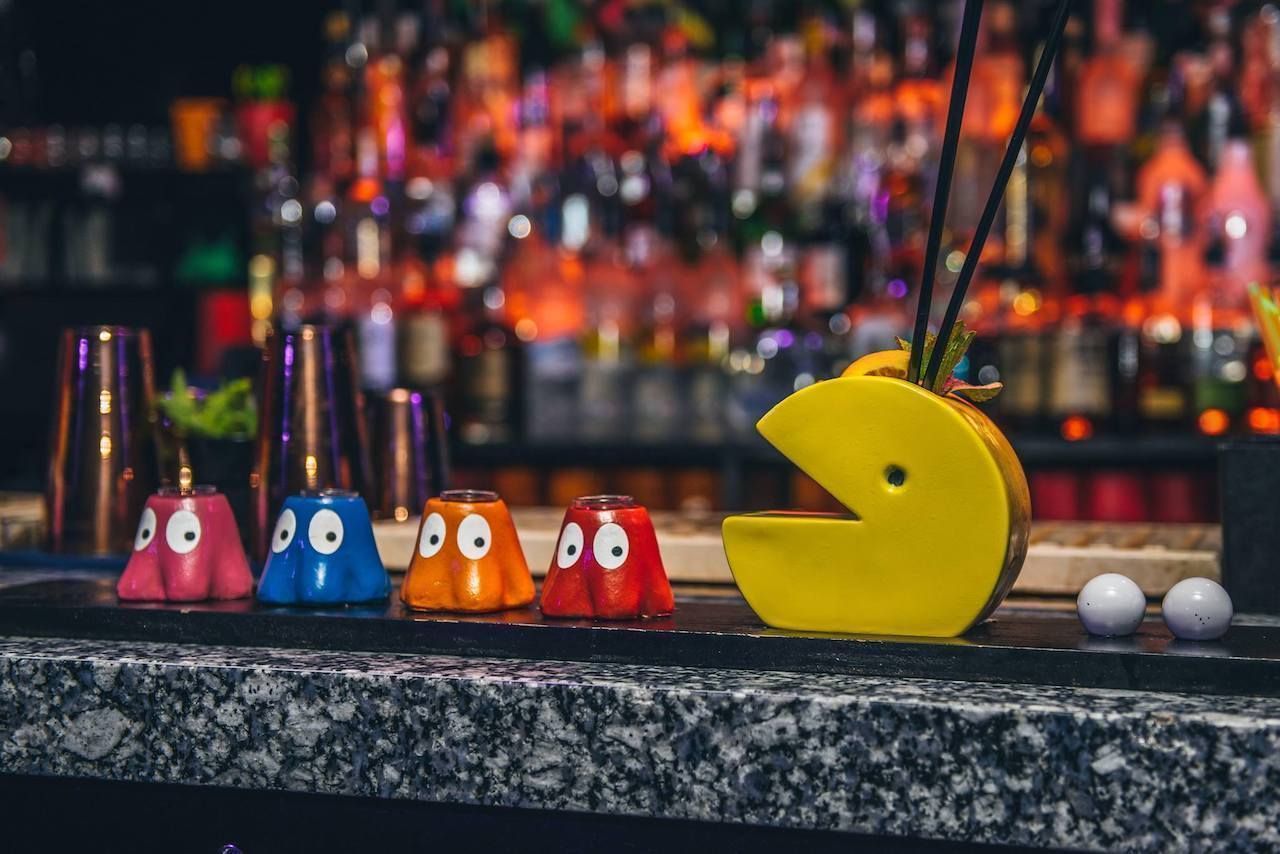 Maggie’s Club $$$$ — Another time-traveling hotspot, Maggie’s Club will transport you into the 1980s when The A Team, Rubik’s Cube, and Margeret Thatcher dominated. Enjoy light-up beverages, your fave ‘80s tunes, and political speeches in the toilet. Signature cocktails include Sex on the Fulham Beach and Purple Rain. Embrace the whole shebang and upgrade to a drinking cup with your choice: Rubix cube, Pacman, or Magaret Thatcher’s head.

Kensington Wine Rooms $$$ — No expense is spared at the Kensington Wine Rooms, one of London’s best wine bars. Choose from 40 different wines along with beers, spirits, and light European bites. For a sophisticated night out, opt for a wine tasting session and learn all about the origins of each bottle.

Bart’s $$$ — This chic cocktail bar is situated along Chelsea’s Sloane Avenue and is styled like a 1920s Chicago speakeasy. Two of the 10 house rules at Bart’s include dress to impress and make sure you have the password. At the back of the apartment, you’ll find a secret garden with a beautiful flower wall — the perfect place to enjoy a cocktail in summer.