As the UK’s capital city, London has fantastic connections across the entire country. Whether you want to explore traditional seaside towns, countryside villages, or historic landmarks, you’ll have plenty of options. Trains take passengers all the way to Scotland, Wales, even Paris, but if you only have one spare day, focus on exploring England. You can day trip to beachy southern shores or northern English cities, with everything from eerie ancient ruins to renowned university towns in between. These locations are easily reached by train or bus, and you can drive there as well, so long as you feel comfortable driving on the left. 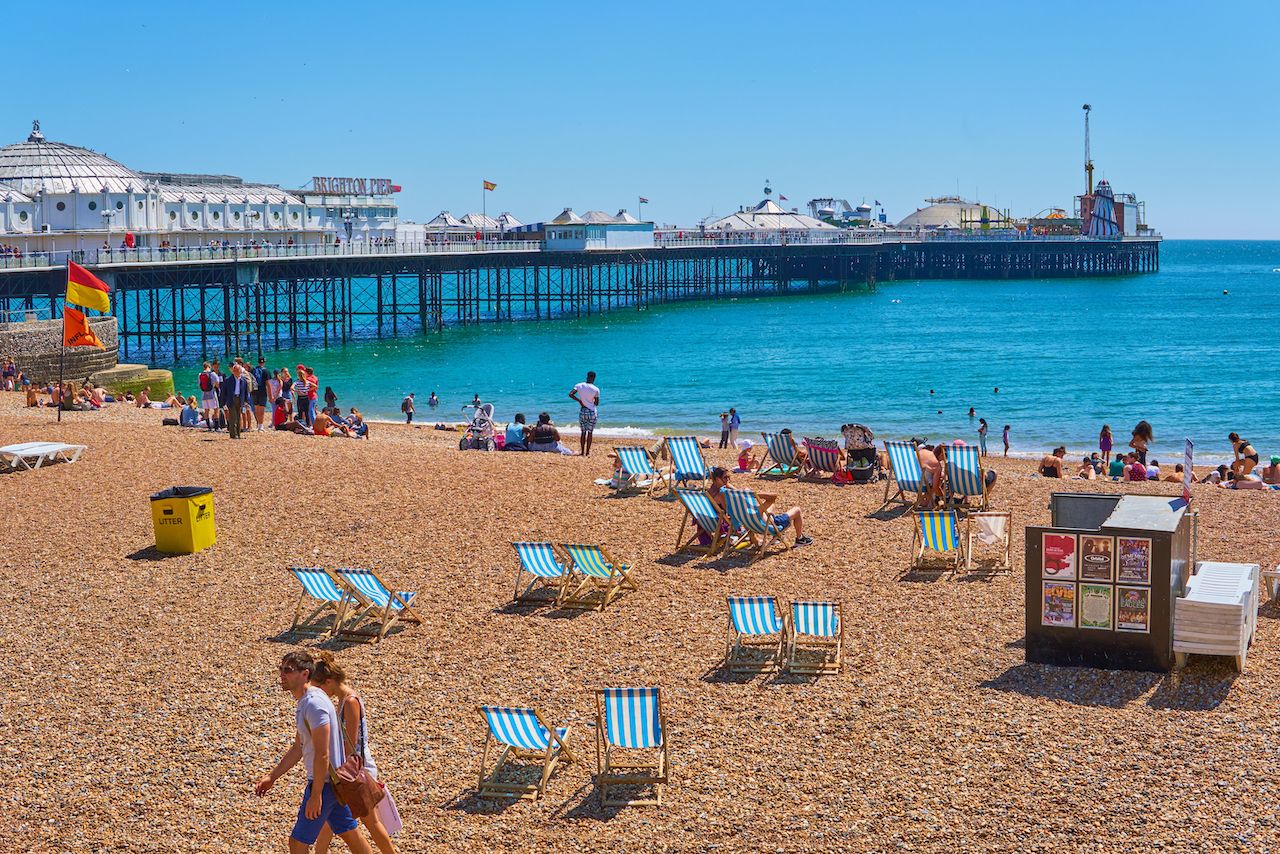 Brighton — Located just under one hour by train, Brighton is a quirky coastal city with its own distinct character. Whether you’re an old school rocker or a modern-day hipster, Brighton will welcome you with a range of events, a thought-provoking arts scene, and diverse festivals. Often referred to as the gay capital of the UK, Brighton has a renowned nightlife with clubs, bars, and restaurants to suit all music styles and interests.

You can start your day at the Royal Pavilion. Constructed in 1787 as a summer palace for King George IV, who had a taste for extravagant and over-the-top furnishings, it’s the most impressive and unusual building in the city. From there, you’re not far from The Lanes, an excellent place to take in Brighton’s winning shopping scene; you’ll find homemade clothing, local arts and crafts, and dozens of antique jewelry shops.

From there, it’s just a few steps to Brighton Pier, where you can experience the UK’s traditional seaside culture at the amusement arcades. You can order fish and chips for lunch at the pier or head along the shore due west, where you’ll find excellent restaurants for lunch like Halisco, Taste of Sahara, or The Gingerman. The ideal time of year to visit Brighton is late spring when you can enjoy a pleasant climate and fewer crowds, savoring its long pebble beach in peace. 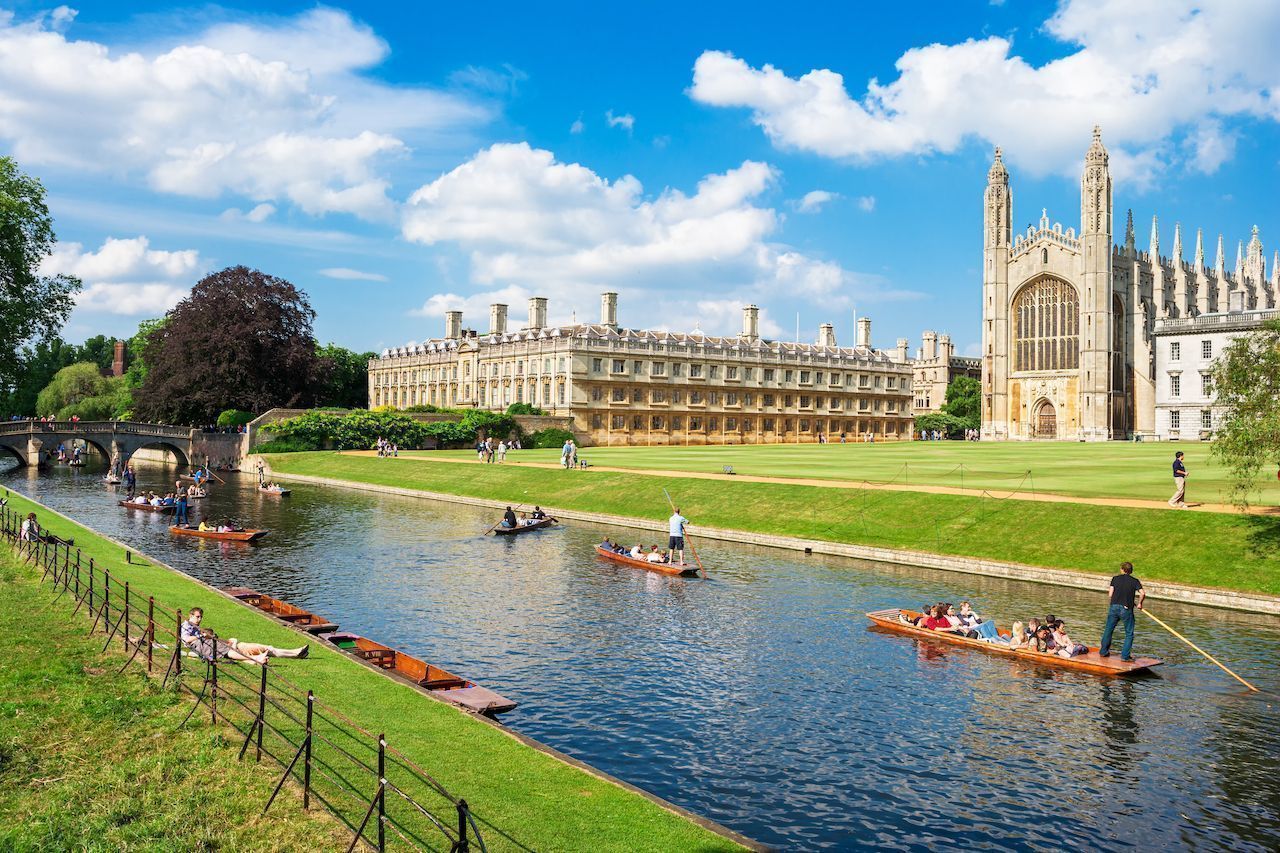 Cambridge — Home to Cambridge University, this historic city is situated just 49 minutes from London’s King’s Cross train station. Best known for its prestigious university buildings, Cambridge is full of historic charm. The Fitzwilliam Museum showcases an impressive collection of European and international artwork while the King’s College Chapel is a stunning example of Gothic architecture.

If the weather permits, be sure to try punting, an unusual way of boating along Cambridge’s River Carn. It takes a while to get the hang of punting, where you guide and push the boat along by pressing a pole into the ground. You’ll find plenty of options all along the river to rent a boat yourself or have a guided tour. Afterward, you can do what many students do and have a picnic in one of the surrounding parks. If you prefer to have lunch in town, you’ll be able to savor Cambridge’s innovative restaurant scene, with its international street food market and excellent restaurants.

Should you opt to stay a little later, you can make your own cocktails at the Cambridge Gin Lab. If you’ve organized it beforehand, you could then spend a night in university accommodation and walk in the footsteps of some of the world’s most successful scientists, politicians, and literary greats. 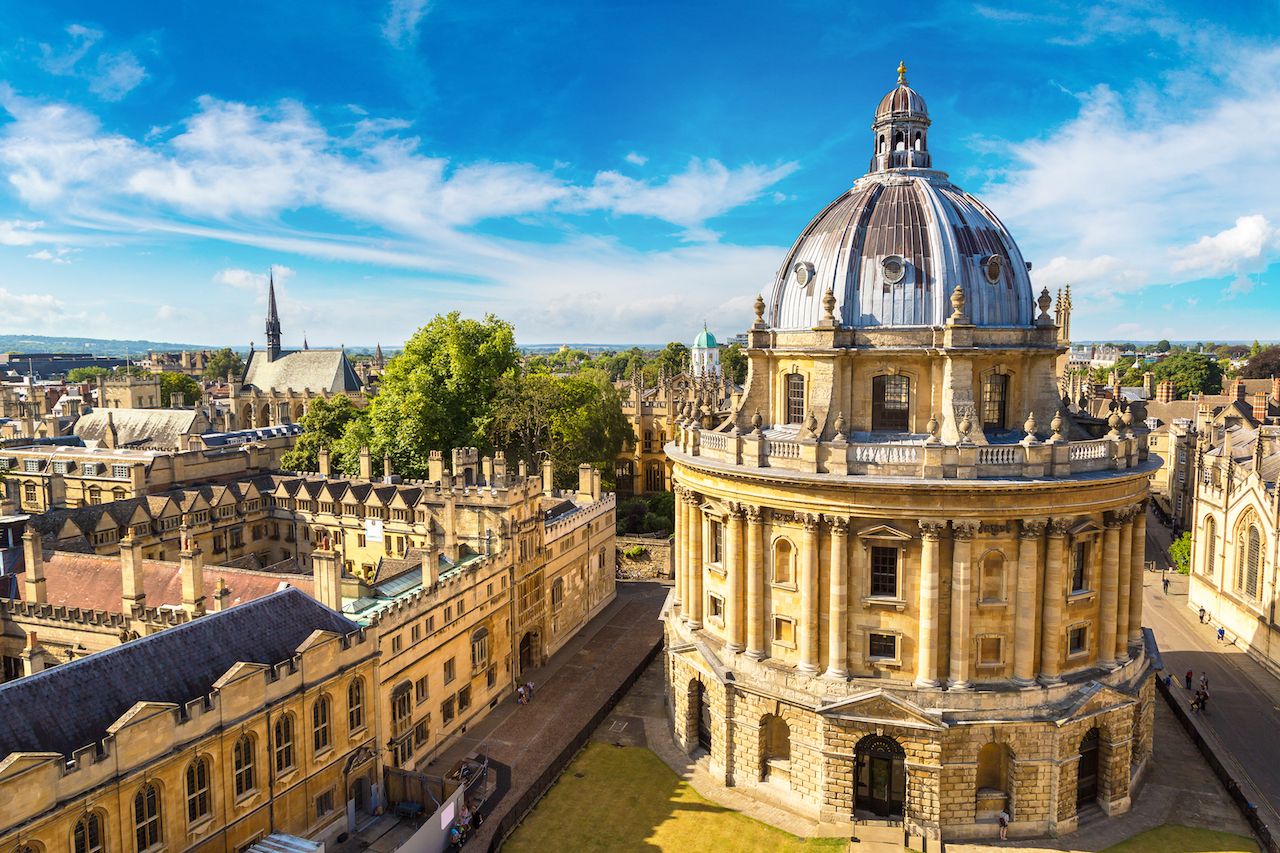 Oxford — Home to the UK’s other world-famous university, Oxford is easily reached by train or car from London. Located in southern England, one hour from the capital, the University of Oxford is comprised of 38 colleges and is often the filming location for many television programs and movies. Although it was not in the Harry Potter films, the dining hall at Oxford’s Christ Church College was said to be the inspiration for the Hogwarts dining hall. Other corners of Oxford were used for the films, but you’ll have to take a private tour to see them.

Beyond the beautiful university grounds, Oxford is a great place to soak up the local culture with historic taverns serving locally brewed beer and gourmet pub grub. If you want to sit in the same spot where C.S. Lewis wrote the first draft of The Lion, the Witch, and the Wardrobe, then head to the Eagle and Child Pub for top quality ale and tasty food. (C.S. Lewis was also a Christ Church College alum.)

The city showcases excellent architecture at every turn with noteworthy landmarks including the Radcliffe Camera, a domed 18th Century building that houses the Radcliffe Science Library. Just 20 minutes away from Oxford by car is Blenheim Palace, a spectacular Baroque landmark and World Heritage site. 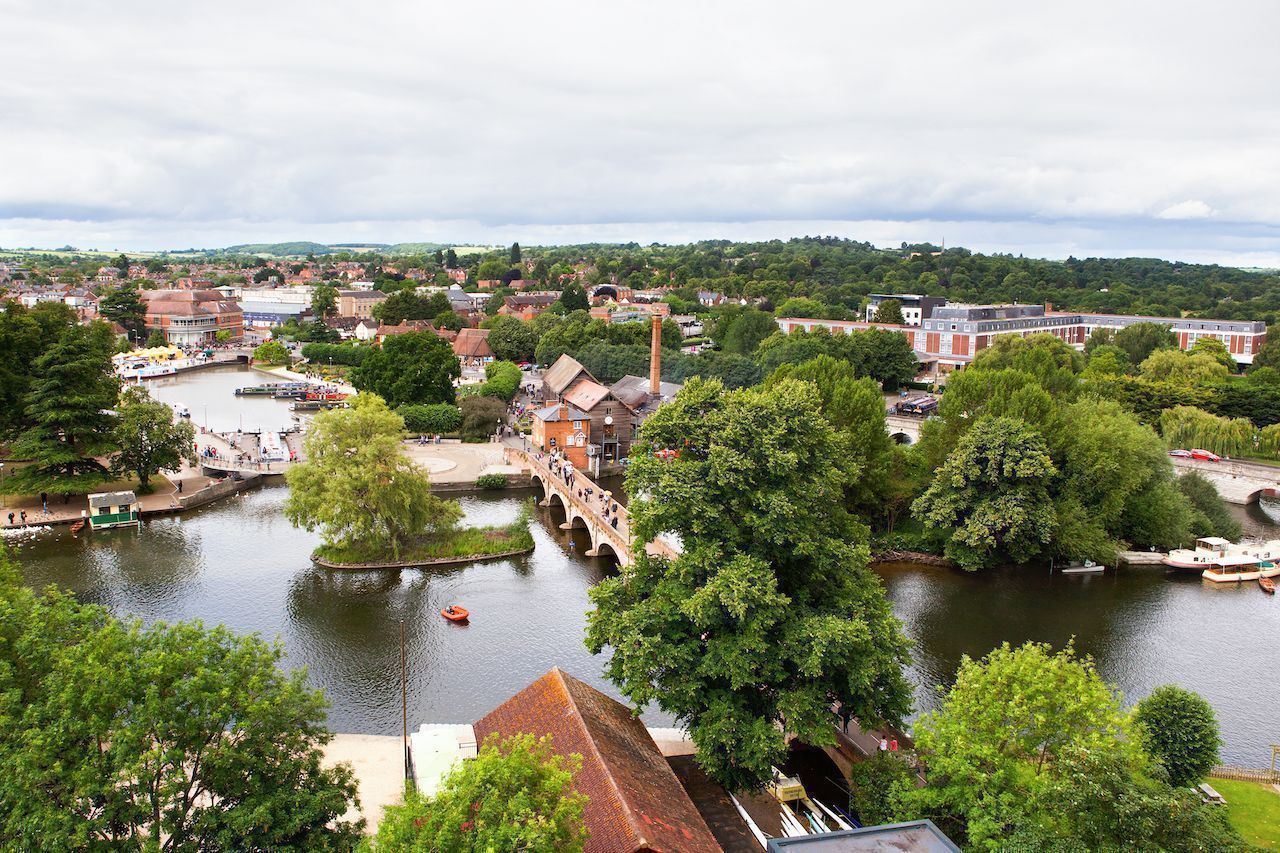 Stratford-upon-Avon — Since it was the birthplace of William Shakespeare, it’s no surprise that Stratford-upon-Avon is all about the beloved bard and his plays. Approximately two and a half hours from London by train, Stratford Upon Avon is a lovely West Midlands town worth seeing for its historic architecture and riverside location alone.

But of course the most exciting reason to visit this town is to gain a deeper insight into Shakespeare’s life and works. Born in 1564, the famed playwright was raised in a modest home on Henley Street that can still be visited today. In fact, much of the picturesque town retains these centuries-old buildings, with idyllic medieval streets, thatched roofs, and charming Tudor landmarks. 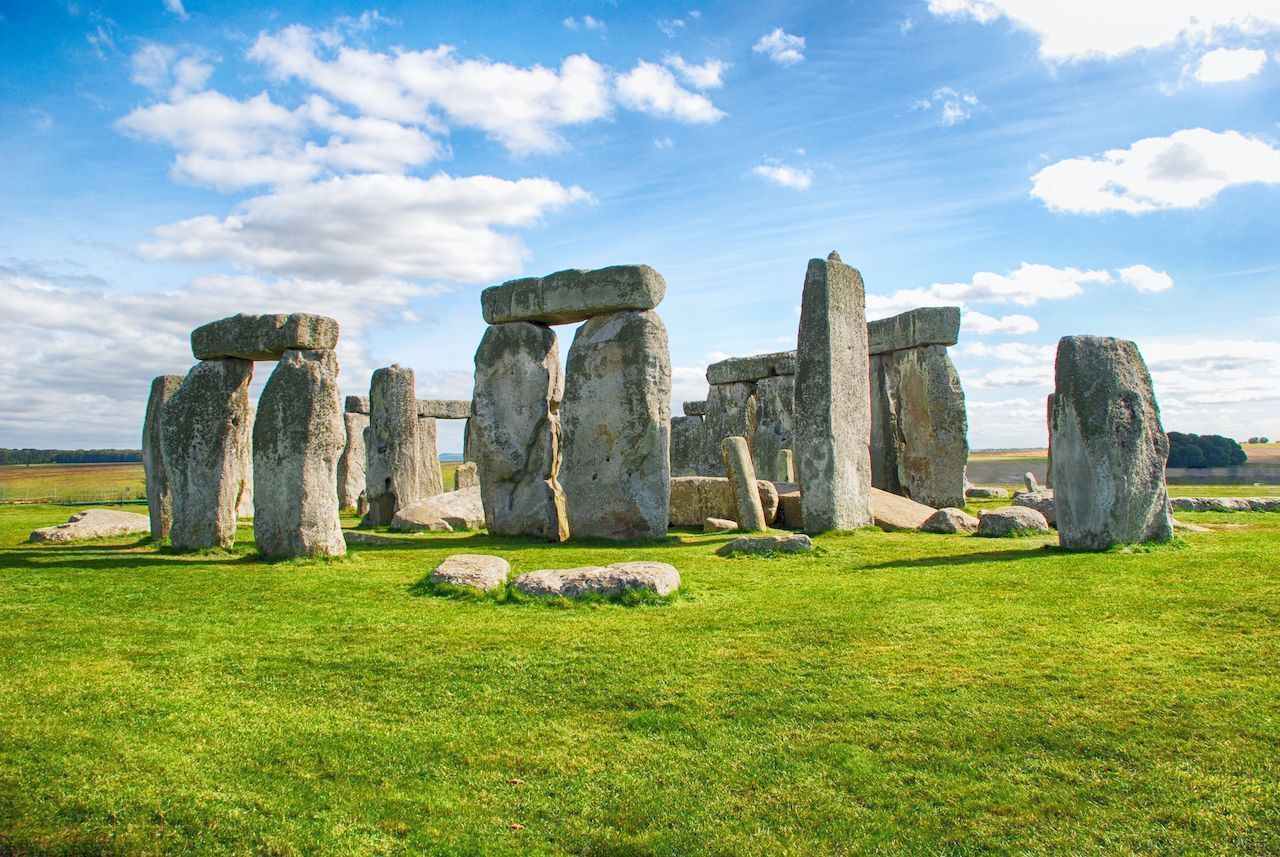 Stonehenge — Just over one and a half hours by car, or two hours and 20 minutes by train, Stonehenge is one of the nation’s most iconic landmarks. This UNESCO World Heritage site often causes controversy between tourists who are split when it comes to rating this destination. Whether you end up falling in love with the prehistoric stone circle or not, it is worth visiting just to make the decision for yourself.

This extraordinary stone formation is believed to have been constructed around 5,000 years ago, about 2500 BC, and it’s considered to be Europe’s most famous prehistoric monument. At the site is a visitor center and an interesting exhibition that houses the remains of a 5,500-year-old man. Timed tickets must be purchased beforehand, and entrance costs 19.00 British pounds (about $25) for adults and £11.40 ($15) for children. For lunch, you’ll find soup and hearty sandwiches at the no-frills Green Tree Café. 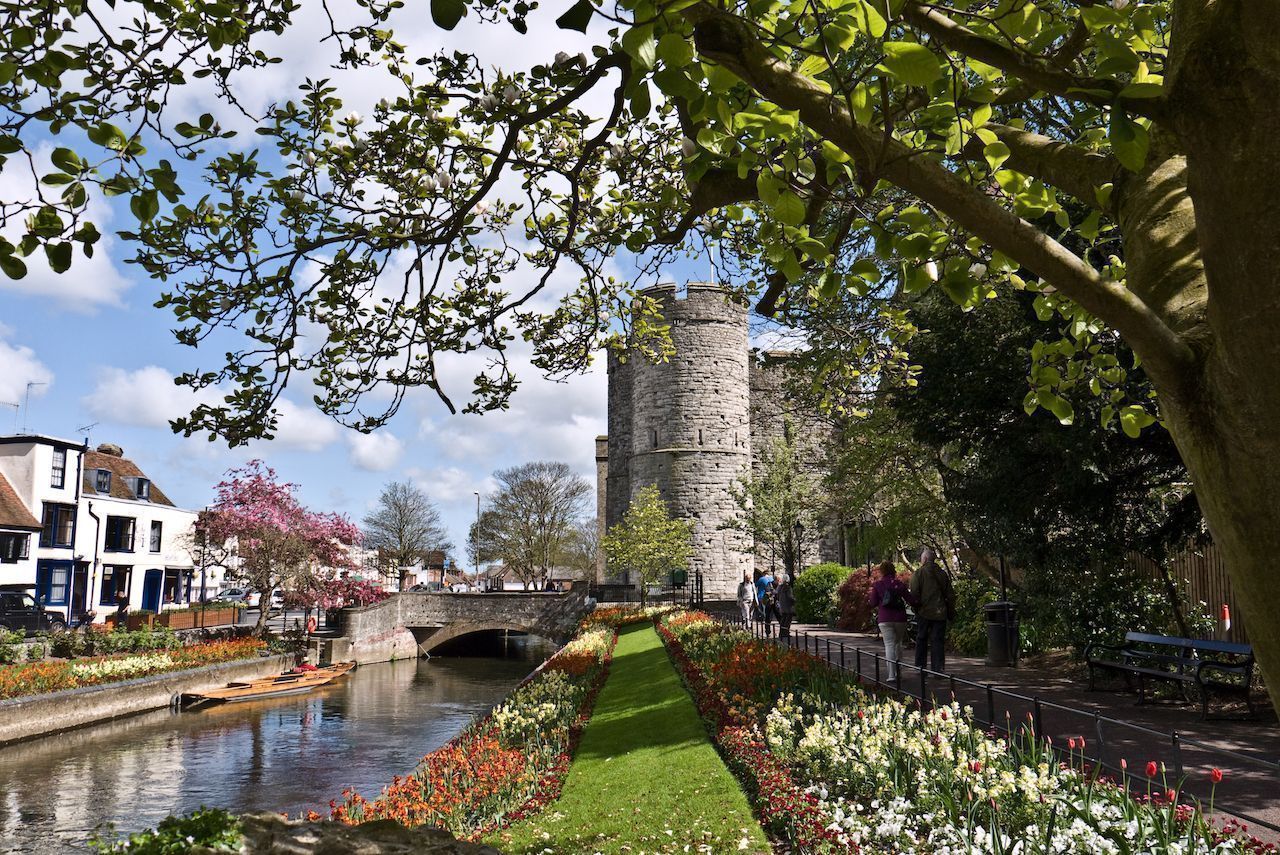 Canterbury — The birthplace of the Chaucer’s Canterbury Tales, Canterbury is an extraordinary city located in Kent. It can be reached in under one hour by train from London and one hour and 30 minutes by car. Home to the Archbishop of Canterbury, the leader of the Church of England, the city’s renowned cathedral is a striking landmark and a World Heritage site. Although the city has had a cathedral since the sixth century, the current building dates to the 12th century. Be sure to spend some time admiring the cathedral’s stained-glass windows and ambitious, sweeping architecture.

If you enjoy visiting museums, the Beaney House of Art & Knowledge is situated in a Tudor house and offers an interesting collection of artifacts. Perhaps the city’s most famous historic event was the gruesome murder of Thomas Beckett by King Henry II in 1170 which has since been dramatized by T.S. Eliott. Today visitors can learn all about Canterbury’s extensive history with a trip to the Westgate Towers Museum or Canterbury Roman Museum. 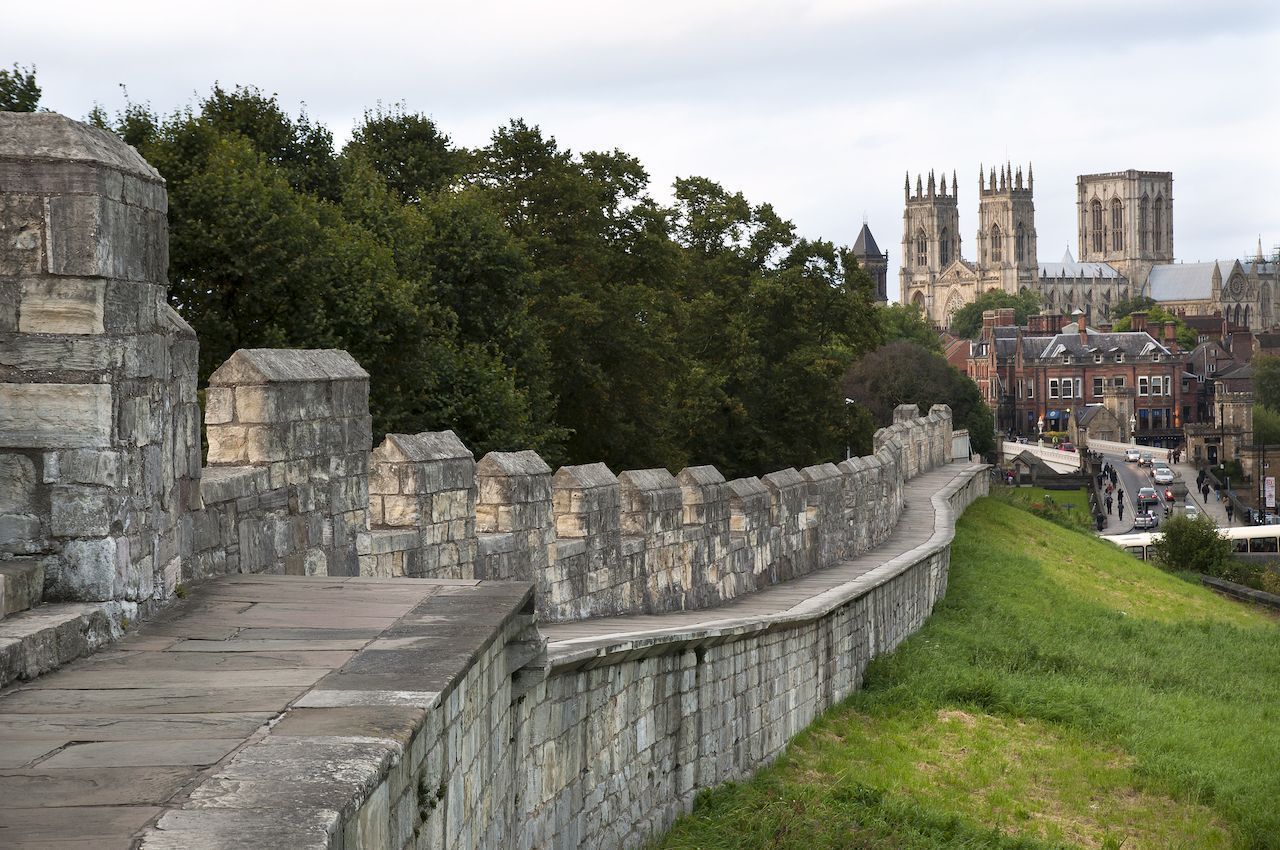 York — Within just two hours from the capital you will find yourself in the idyllic city of York. Amongst the green rolling hills and farmland, the epitome of the bucolic British countryside, York is a great destination for those wishing to experience life in the north. Surrounded by ancient city walls, York is brimming with stories that date back to the Vikings. It’s amongst the cobbled stone pathways and picture-perfect Tudor cottages of the Shambles that you will find local chocolate shops, jewelers, and antiques.

At the heart of the city is the York Minster, one of the largest churches of its kind in Northern Europe. Its three soaring towers, the tallest of which is 236 feet high and holds 35 bells; the biggest of those bells weighs over 10 tons. Beyond the impressive architecture, including stained-glass windows that date back 800 years, the York Minster has a fascinating history that’s reflected in the details and artwork within its walls.

Although the current Gothic structure was built in the 12th century, a church has been on the site since the year 627. The history of York itself dates back even further, with Romans settling there in the year 71. In fact, the Yorkshire Museum, just steps from the minster, has an impressive collection of Roman ruins. If you wish to head to York in true style, hop on board an old-fashioned steam train for opulent carriages and fine cuisine that takes you back to yesteryear. 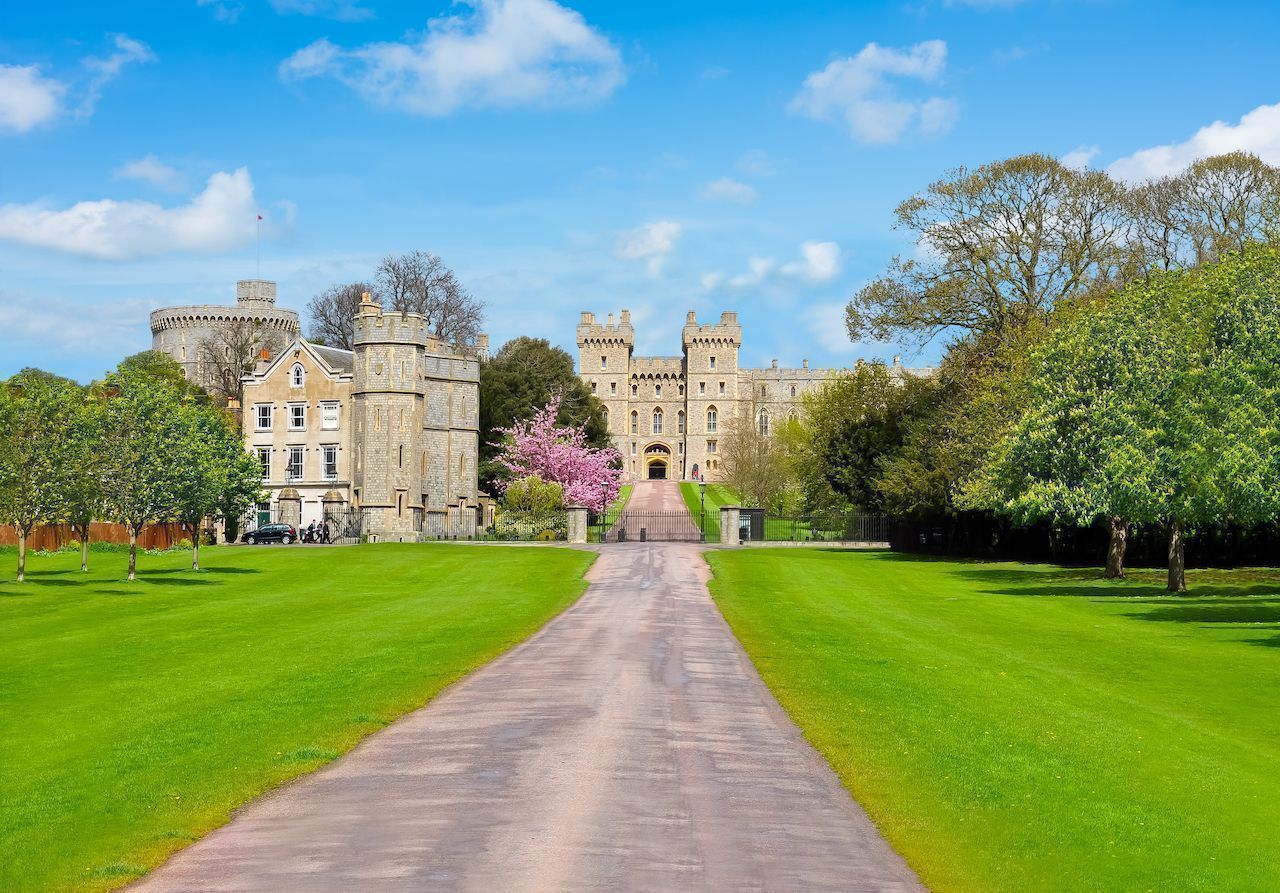 Windsor — Home to Windsor Castle, one of the most beautiful Royal Palaces in Britain, Windsor is an ideal day-trip destination. The main draw is the castle, a stunning building that was recently the wedding venue of Prince Harry and Meghan Markle. The castle was originally founded by William the Conqueror and is now the home of Queen Elizabeth II. Within the grounds are a range of exhibitions, collections, and beautiful gardens to explore. Walk through the grand state and ceremony rooms and step inside St. George’s Chapel.

Compact and easy to explore on foot, Windsor brims with shops, riverside walks, historic landmarks, and restaurants to stop in for a bite. If you still have time to spare, take a walk through the city to nearby Eton College, with its impressive architecture and courtyards. The 600-year-old private school for boys is probably the best-known boarding school in the world. If it’s a weekday, you’ll see the students wearing black morning coats (like long-tailed tuxedo jackets), pin-striped pants, starched white shirts, and white ties or bowties.