When it comes to parks and gardens, London earns top honors on relaxing outdoor spaces. In fact, there are more than eight million trees covering almost half of the capital. London is also becoming ever more community focused, with local parks committed to bringing people together through gardening, public allotments, and a range of activities. With so many palaces and historic buildings, London also has plenty of royal parks and gardens alongside them to explore. And if you just want to kick back and unwind, you’ll find green spaces throughout the city that are ideal for picnics, boating, and people watching. 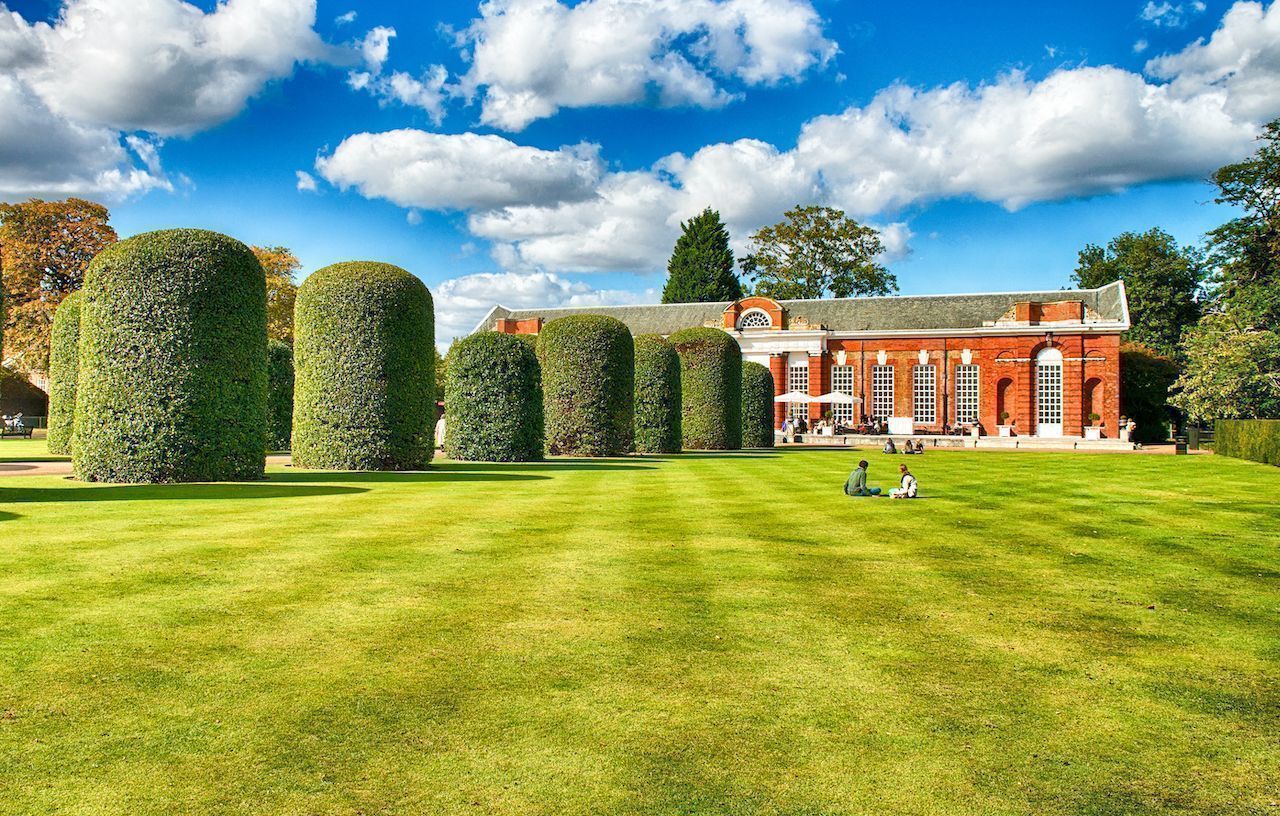 Hyde Park — Easily London’s most famous park, Hyde Park is a lovely, 350-acre green area located in the borough of Kensington. Once used as a hunting ground for King Henry VIII, this park today is filled with spectacular gardens, tree-lined lanes, and always has something going on. It first opened to the public in 1637 and has since grown to host concerts, national celebrations, and the annual Christmas festivities at Winter Wonderland. The Serpentine Lake is a lovely spot at any time of year with pedalos and a brand new SolarShuttle boat that can carry up to 40 passengers and is entirely powered by the sun. Alternatively, visitors can choose to take a refreshing dip in the swimming-friendly ponds. Hyde Park is also home to the historic Speakers’ Corner, which sees a variety of public speeches and political debates taking place every Sunday. 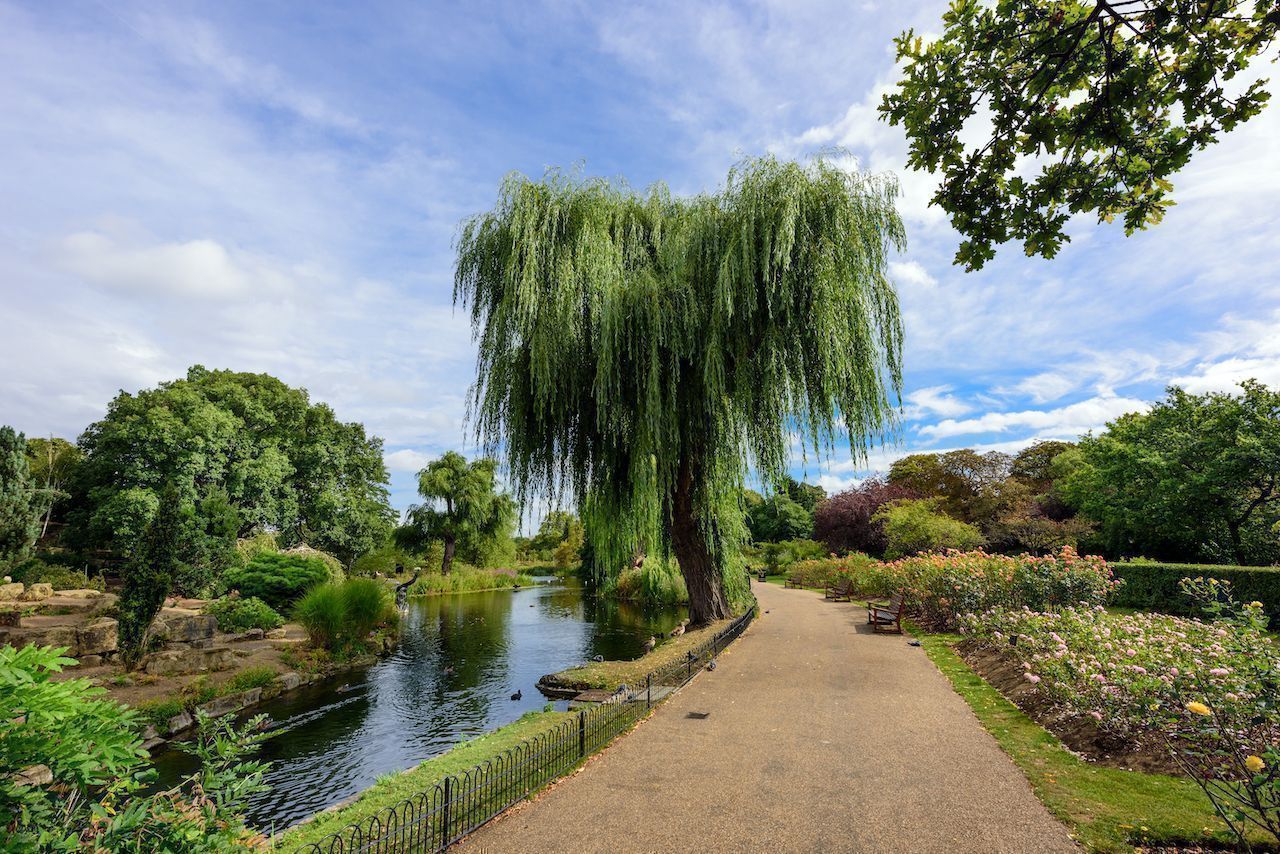 Regent’s Park — Another one of London’s Royal Parks, Regent’s Park is named after King George IV, who was originally known as the Prince Regent. Spanning 395 acres, this handsome park is comprised of picturesque gardens, an open air theater, and the London Zoo. The park has a fascinating history that dates back to the early 16th century when it was seized by Henry VIII. It was also bombed in World War II, but has long since been restored to its natural beauty with peaceful landscaped areas and an impressive display of roses at the Queen Mary’s Gardens. A perfect spot for picnics, Regent’s Park offers lots of space to relax with benches, outside tables, and seasonal deck chairs. Alternatively, if it’s summertime, reserve tickets ahead of time to one of several excellent outdoor productions at the Regent’s Park Theatre. 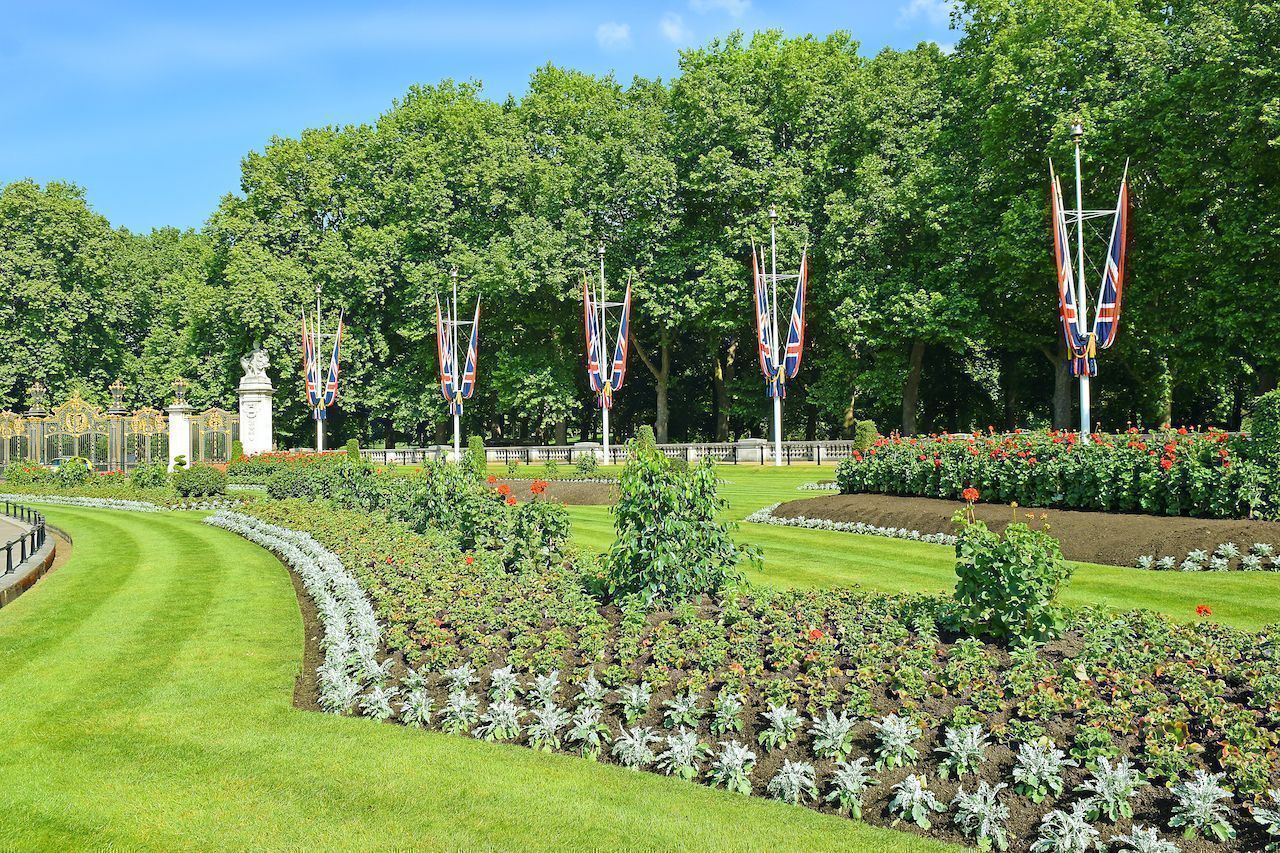 Green Park — Surrounded by Buckingham Palace, St James’s Palace, and the iconic Ritz Hotel, Green Park is an elegant green space in the heart of London’s upmarket center. Compared to other parks in the city, Green Park is fairly compact but it’s a great place to watch the local judo classes, running groups, and tai chi lessons taking place. In summer, the park is adorned in large deck chairs inviting visitors to have a little break from the hustle and bustle of the city. It’s home to a number of significant memorials including the Canada Memorial, which remembers the one million Canadians who fought alongside the British in WWI and WWII. Three unique watering holes have also been specifically designed so that dogs, wheelchair users, children, and adults can all use them. 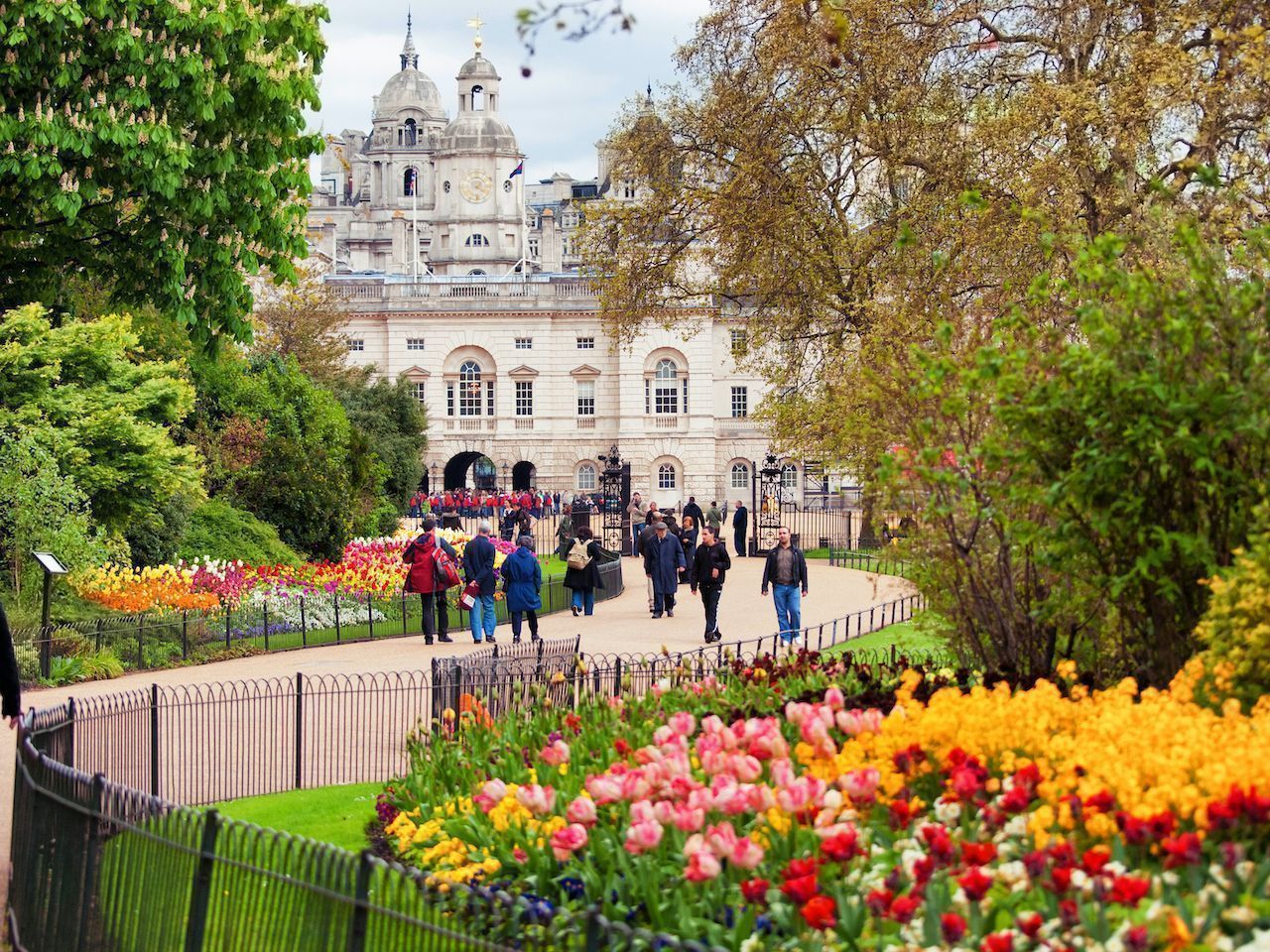 St James’s Park — For almost 400 years, pelicans have graced the banks of St James’s Park, a tranquil haven in London’s political center. Just a short walk from Horse Guards Parade and the Houses of Parliament, this park offers wonderful views of some of the city’s most famous landmarks. It was originally the gardens of notorious monarchs including Elizabeth I and James I, making it the oldest of London’s Royal Parks. Connecting St James’s Park, Hyde Park, Green Park, and Kensington Gardens is the Diana Princess of Wales Memorial Walk, a seven-mile walk incorporating landmarks that were significant to the princess. This route is a great way to explore London’s green spaces and photogenic sites. 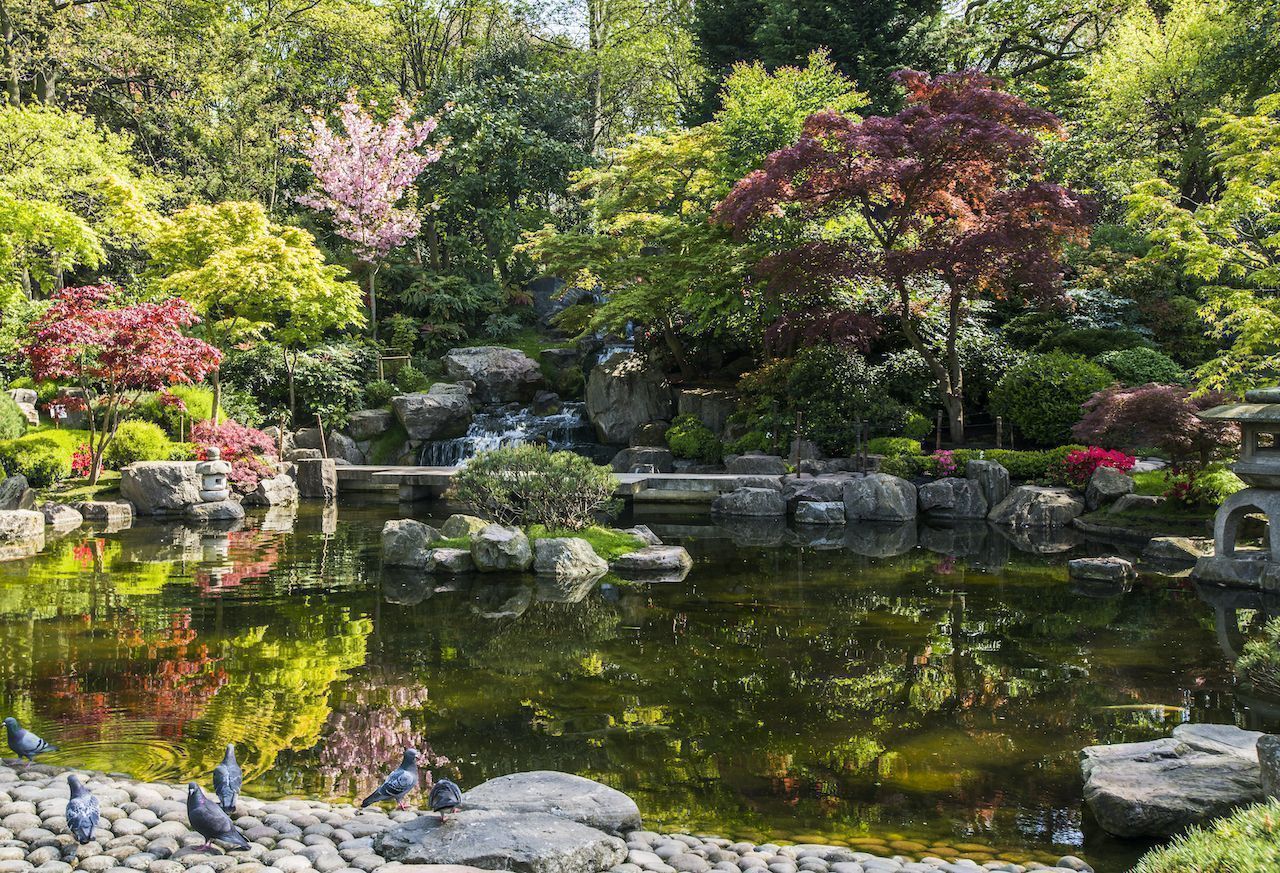 Holland Park — Surrounding a large Jacobean mansion, Holland Park is a quiet space that is conveniently set away from the busy tourist hubs. Holland Mansion was once home to the Earl of Holland and was often frequented by famous writers including Lord Byron. During WWII the majority of the house was destroyed and the surrounding gardens became the main attraction. The park is now home to the famous Kyoto Garden, opened by Prince Charles in 1991 as part of the Japan Festival. These stunning gardens feature bonsai trees, water features, and koi carp. Holland Park also has a playground and open air performances during summer. 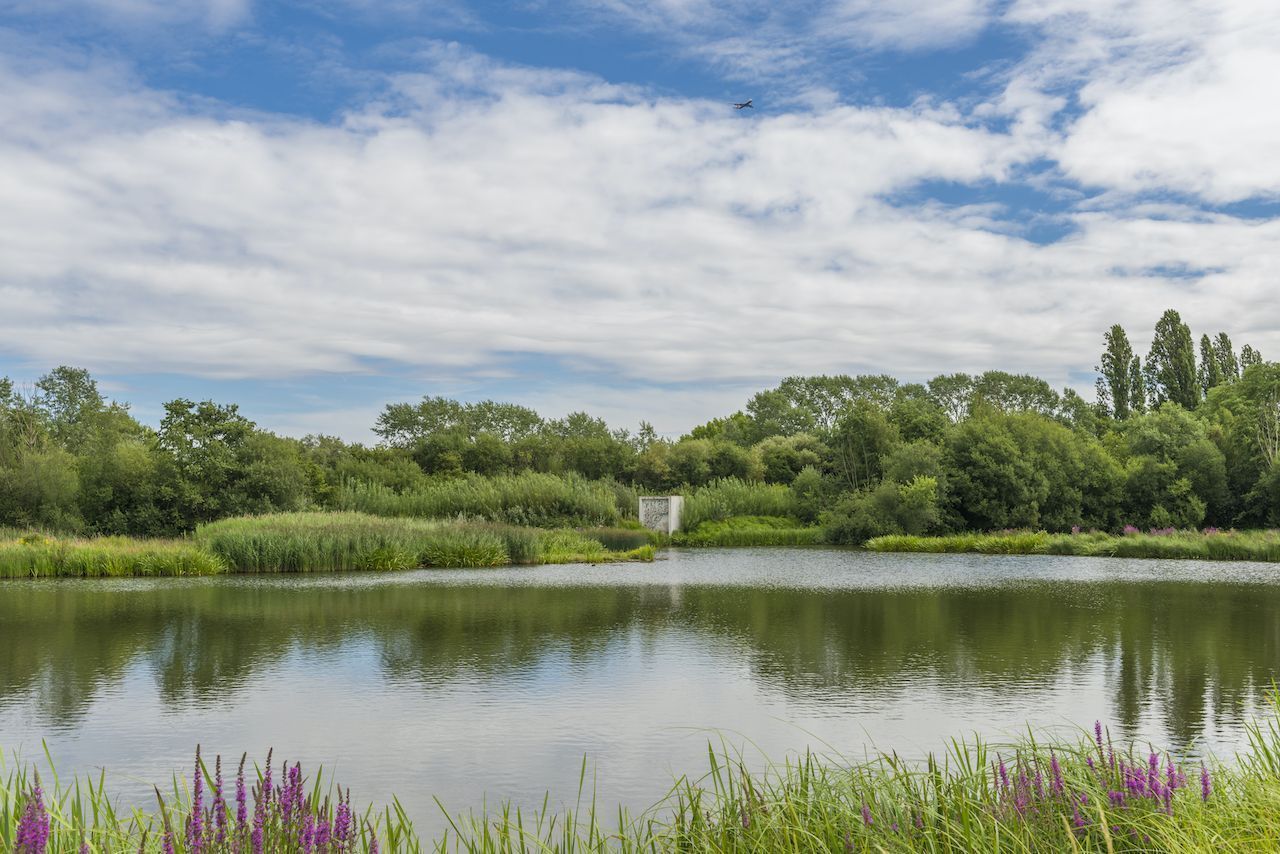 London Wetland Centre — A little different from the other parks on this list, the London Wetland Centre is a huge conservation area packed with ponds and lakes. Situated close to Hammersmith, admission to the center is £11.70 (about $15.30) per adult or £31.99 (about $42) for a family. Ideal for birdwatchers, the London Wetland Centre is dedicated to the protection of its wildlife with a wide variety of habitats. Of the various bird species in the park, keep an eye open for the sand martins, wheatears, and wagtails. There are also otters, bats, butterflies, and frogs which can often be seen from the observation decks. You can take part in drawing classes to learn how to capture the area’s diverse scenery on paper, or follow one of the walking routes to see what you find. 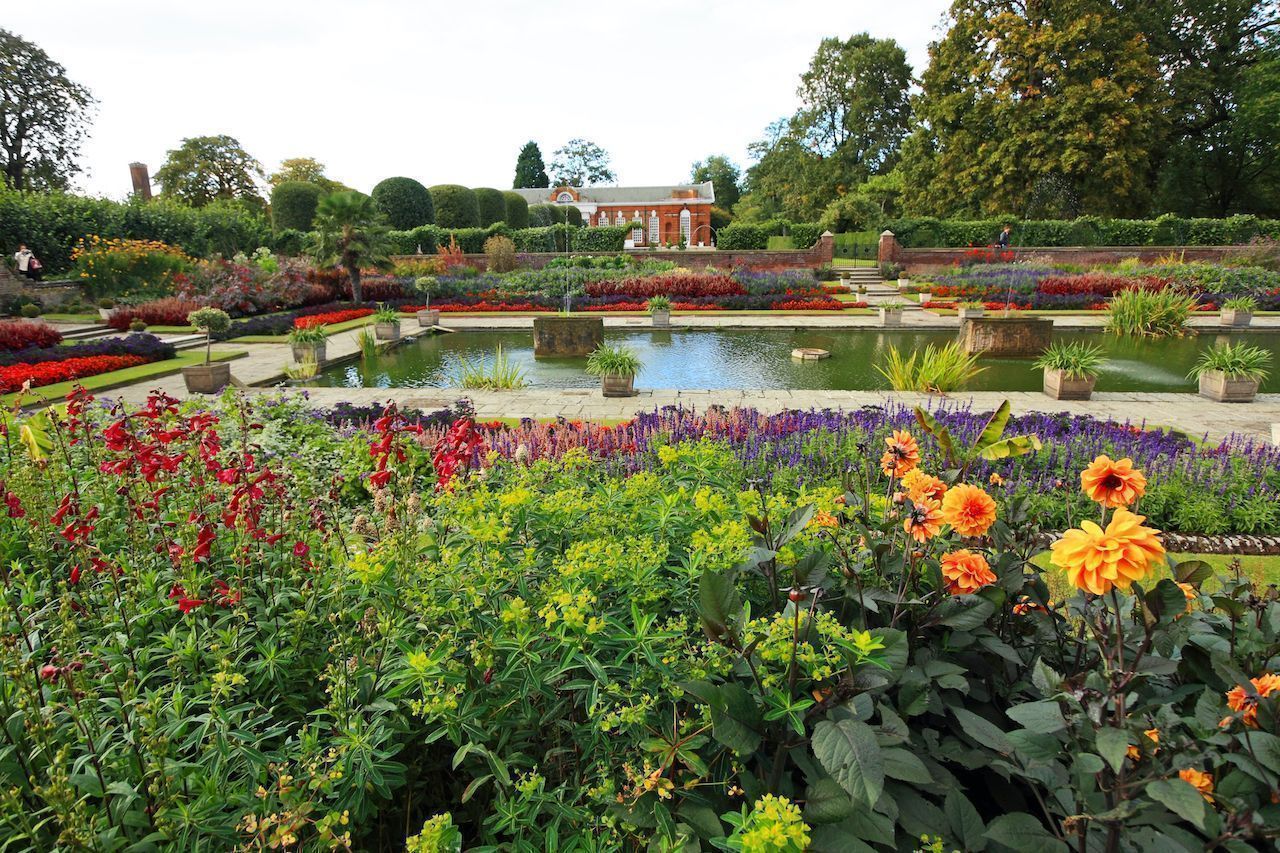 Kensington Gardens — Kensington Gardens were once part of Hyde Park and today are a separate attraction altogether. Home to Kensington Palace, this park is a lovely place to unwind with family. In memory of Princess Diana and her commitment to children’s charities, there is a beautiful playground in the form of a large wooden pirate ship. Unique to this park is an allotment where you can learn gardening tips and techniques. Within the gardens you will also find the Serpentine Galleries, which showcase art, photography, and unique architecture. 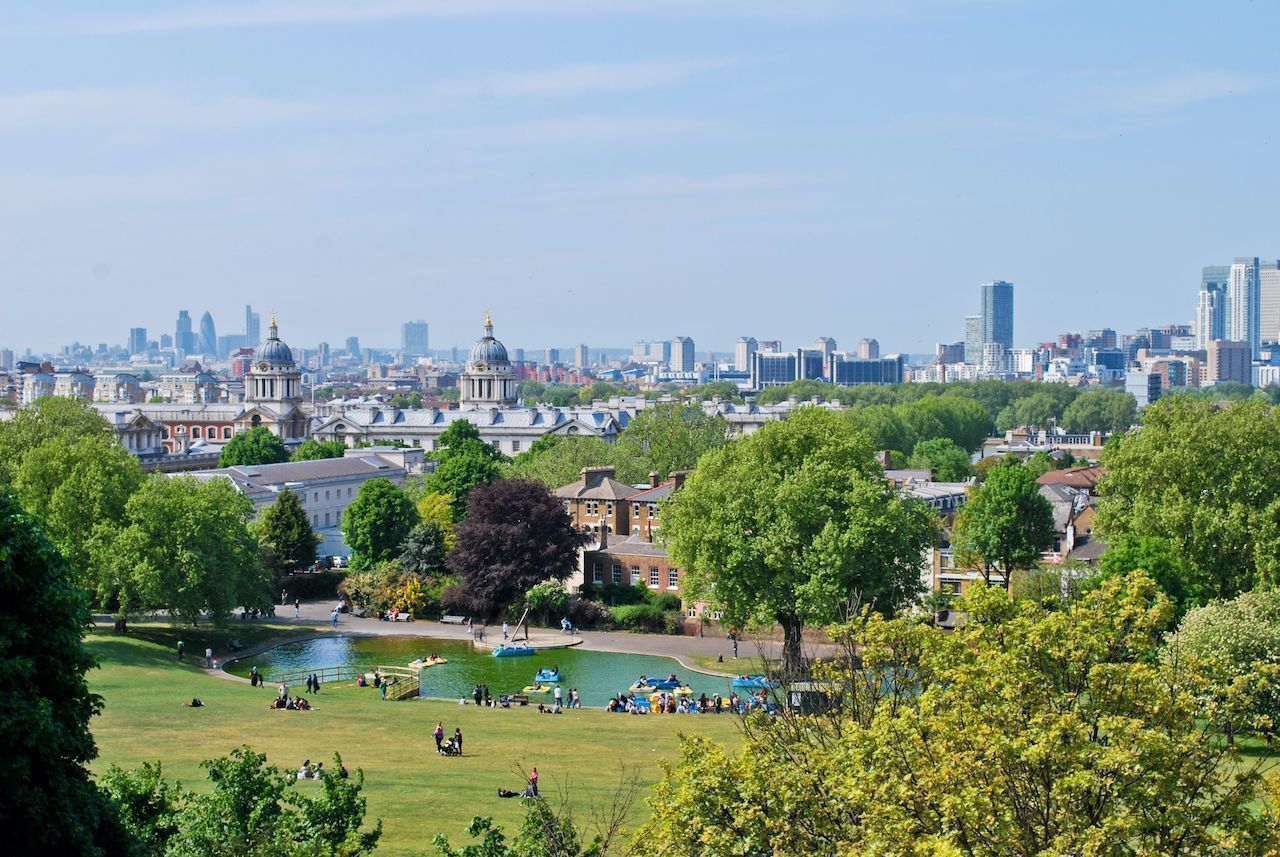 Greenwich Park — If you are spending the day exploring the maritime museums of Greenwich, then you will most probably stumble across this park. Spanning 183 acres, Greenwich Park is a large area with a history that dates back to Roman times. Within the park are a number of attractions including Greenwich’s famous Prime Meridian line where you can cross two time zones. The Royal Observatory also sits within the park, offering the opportunity to learn about astronomy and view what was once the world’s largest telescope. Even if you don’t have time to go inside, take a walk up to the observatory for spectacular views across the city. The park also has some resident deer, wild flowers, and a wide variety of different bird species to discover. 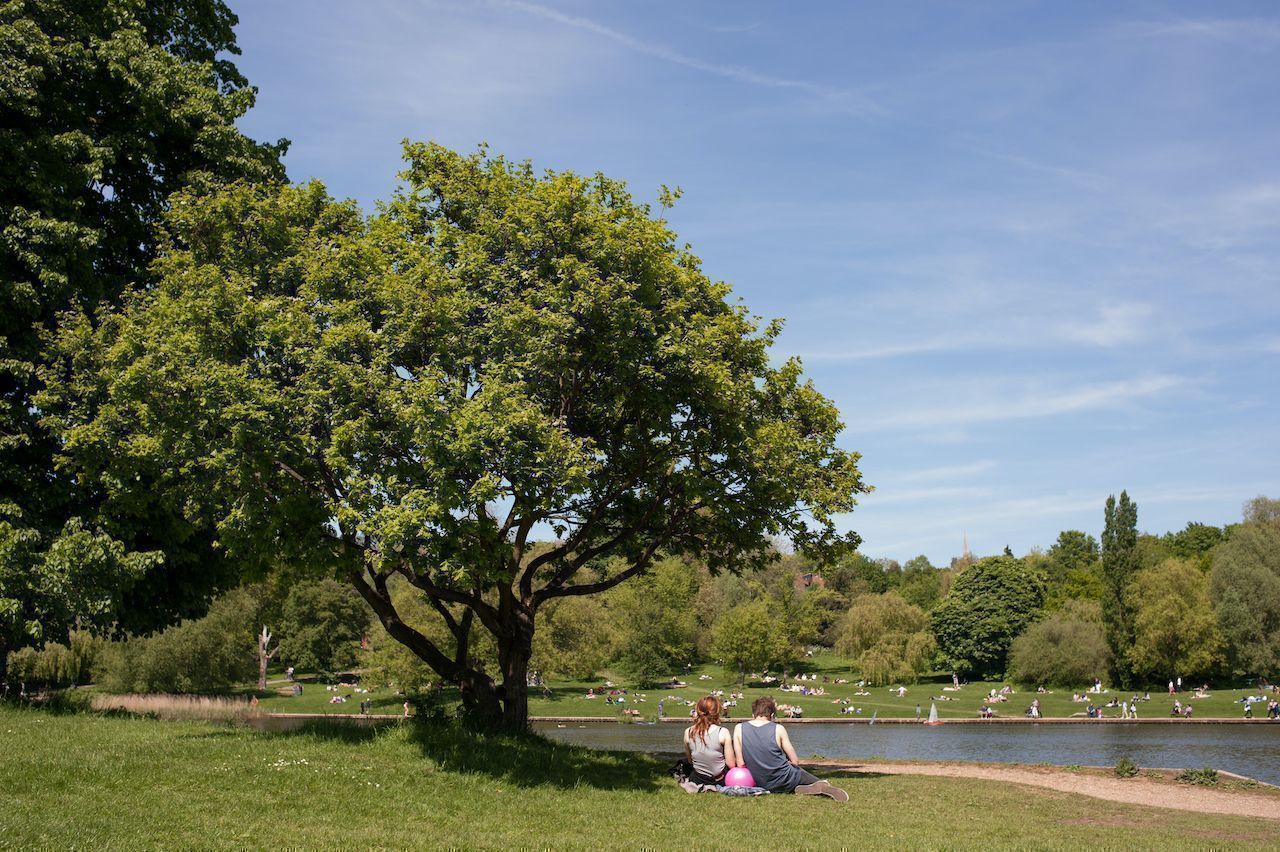 Hampstead Heath — A popular hangout with the locals, Hampstead Heath is located about four miles from the city center, providing people the chance to completely unwind. Perhaps the biggest draw to this green space are its three swimming ponds and lido, which are perfect in summer. Popular with the locals, the ponds are a great place to chill out after a day of sightseeing. Hampstead Heath also has an athletic track, sporting fields, and a small zoo. 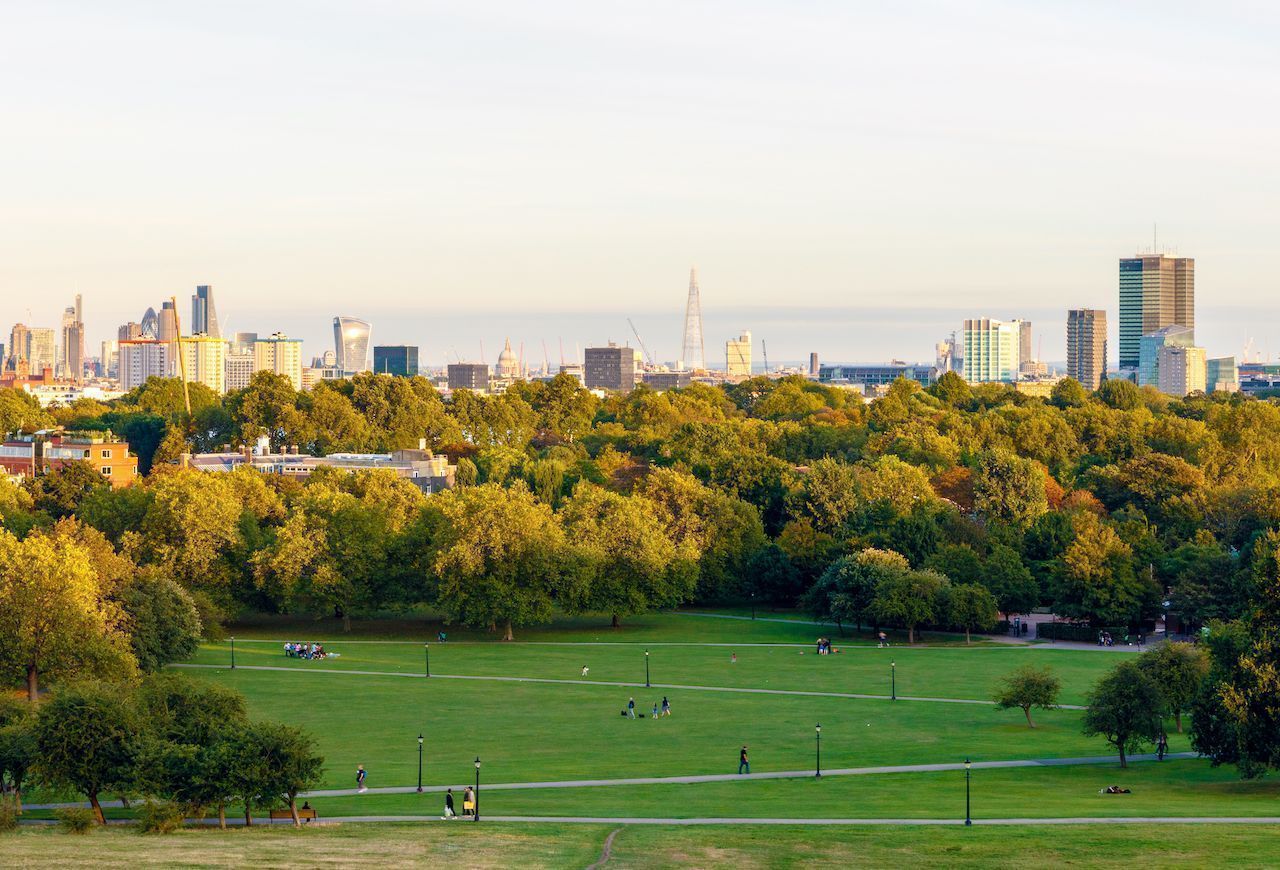 Primrose Hill — Forming part of Regent’s Park, Primrose Hill deserves a separate mention due to its outstanding scenery. Located at the northern end of the park, across from Prince Lambert Road, the hill is one of London’s protected viewing points due to its panoramic vistas of the city’s skyline. Of course, like most of London’s parks, Primrose Hill has an interesting history that places it at the forefront of significant duels and battles. Shakespeare’s Tree is a single tree that stands toward the bottom of the hill, planted in 1864 to commemorate William Shakespeare’s 300th birthday.