By October, there’s no doubt about it: fall is in full swing. Unfortunately, there are only a few weeks to truly enjoy the peak of this colorful season — and maybe even less depending on where you live. That’s why you need to plan ahead, lest fall pass us by before we have a chance to embrace it. When it comes to seasonal activities, old standbys like leaf peeping and apple picking immediately come to mind, but there are plenty of other ways to enjoy the heart of fall.

From taking a hot air balloon ride in Albuquerque to downing oysters in Seattle, these are the fall experiences you should put on your October travel agenda. 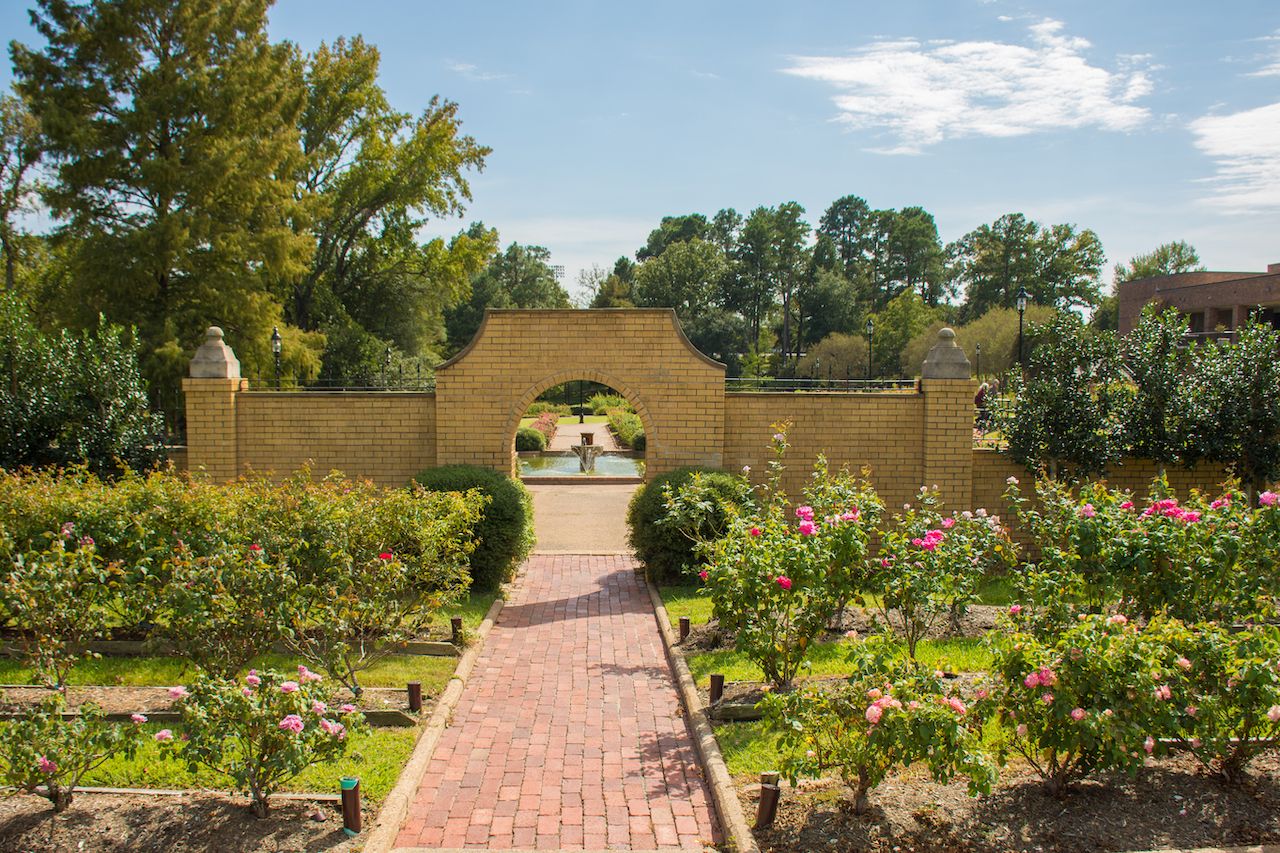 Spring might seem to have a monopoly on flowers, but in Tyler, Texas, autumn is all about roses. Tyler, 100 miles from Dallas, is often called the Rose Capital of America. This is one mid-sized Texas city that’s not defined by football, steak, or oil, but by roses.

At the start of the 20th century, the town’s thriving peach industry collapsed, and European immigrants introduced roses as an economic replacement. Now it’s home to the largest rose garden in the US, which has more than 38,000 rose plants across 14 acres. Around half of all roses sold in the country come from Tyler. The garden remains in full bloom through November, though if you’re going to visit, you shouldn’t miss October’s Texas Rose Festival.

Taking place October 14 through 17 this year in the massive rose garden, the festival features a parade, an arts and crafts fair, a plant sale, and coronation of a queen. If you can’t make it for the Rose Festival, you can still take advantage of Tyler’s network of hiking and biking trails, Caldwell Zoo, or kayaking on Caddo Lake.

2. A fall beach trip to Nantucket 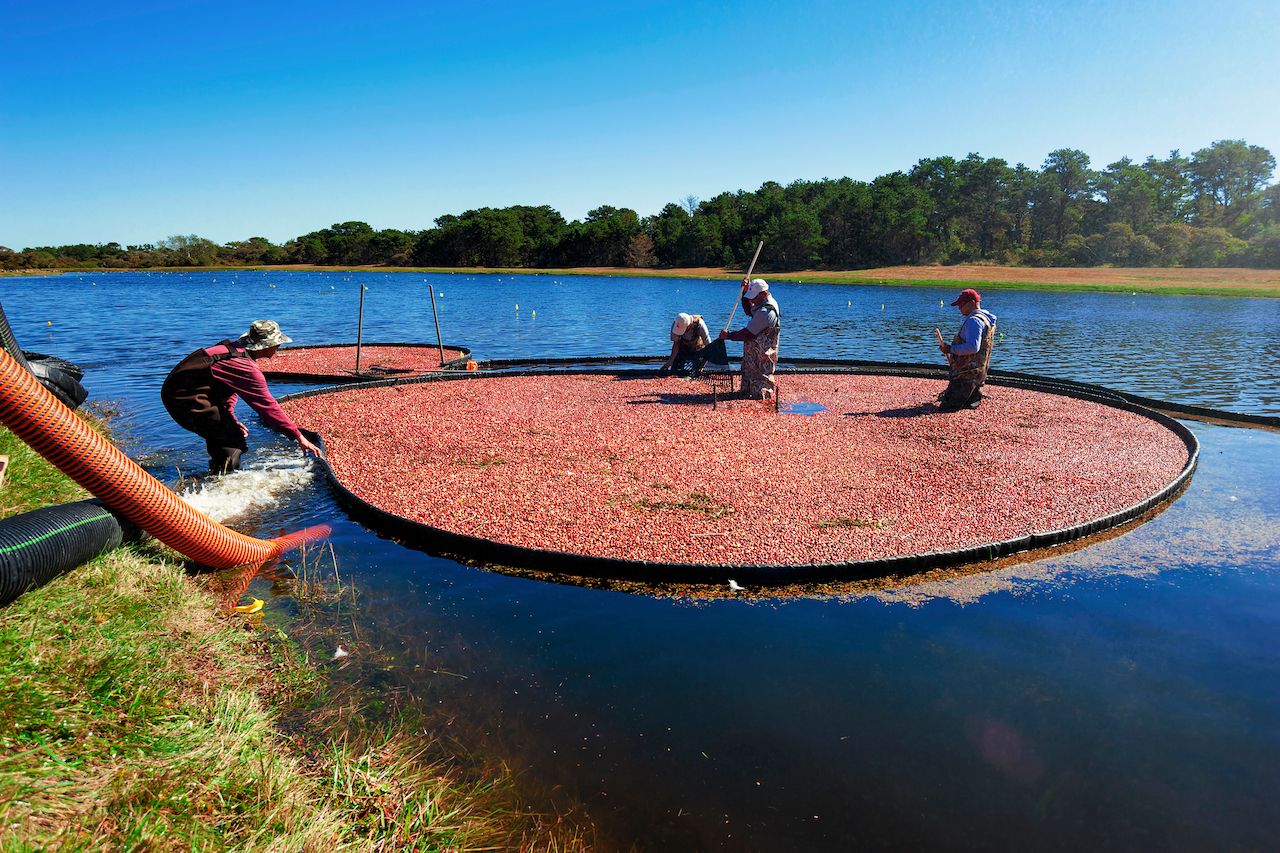 While usually associated with summer, Nantucket is also an island that’s an ideal fall destination. Located 30 miles off the coast of Massachusetts, the island is just 100 square miles and known for its beaches and ritzy summer homes. But there’s more to Nantucket than just the beach — especially in the so-called “off-season” when the island isn’t inundated with tourists.

September to November is actually the best time to visit if you’re the type of person who travels for food. You can get seats at restaurants that are usually booked solid, and fall is harvest season for scallops. Other New England staples like apples, squash, and cranberries are also found in abundance on menus across the island.

Cranberry bogs are perhaps the island’s most underrated attraction. For those in-the-know, it’s a tradition on Nantucket, Martha’s Vineyard, and Cape Cod to visit the cranberry bogs during fall to watch the harvest. Windswept Bog on Stump Pond, for example, has 231 acres of retired cranberry bogs, hardwood forests, and ponds, as well as miles of scenic walking trails. Milestone Bog, in the heart of the island, has been the epicenter of cranberry farming on Nantucket for the past 150 years, and visitors can enjoy views of the surrounding rolling hills and grasslands.

3. Leaf-peeping and beer in Portland, Maine 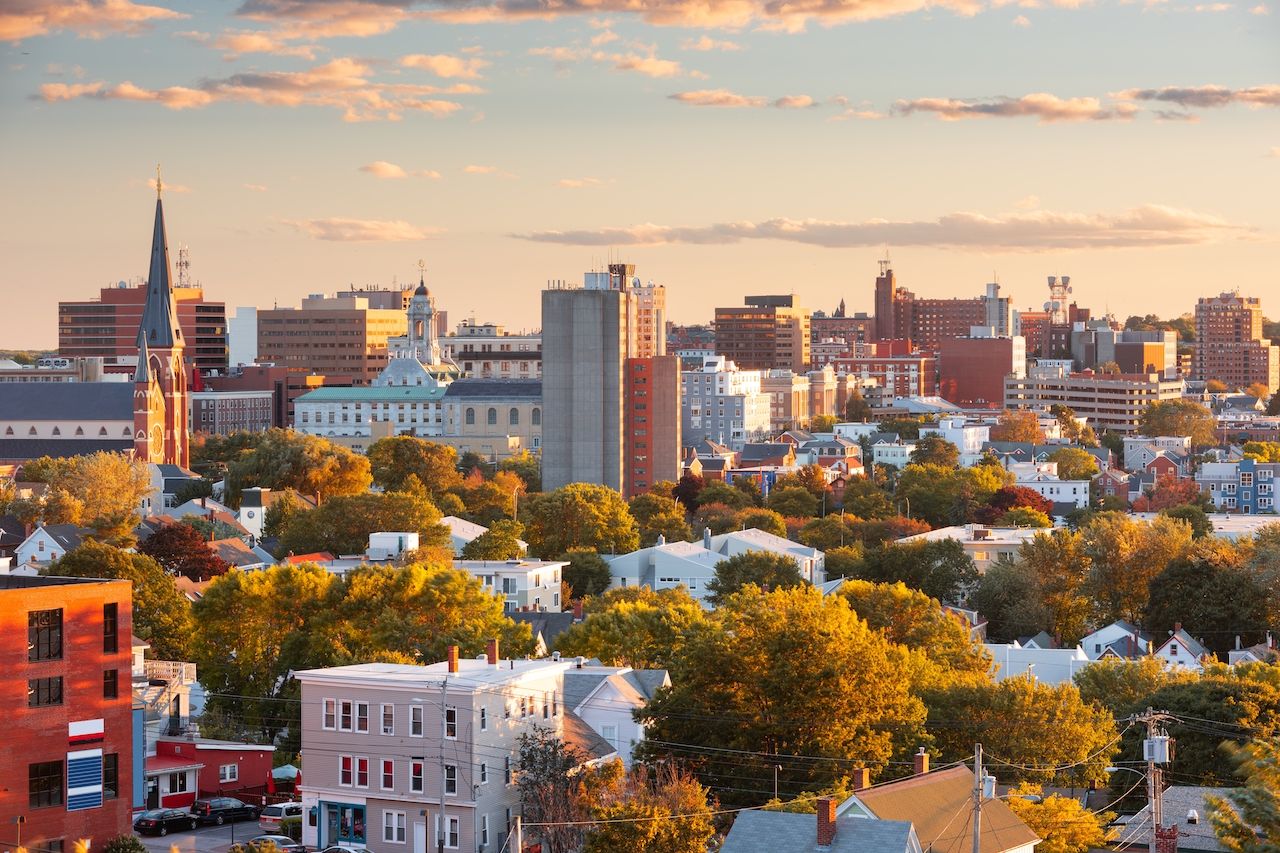 For the best fall foliage experience in New England, you’d probably have to forge deep into the woods of Maine and spend the weekend in a tent. If that’s your level of commitment, go for it. If you’d prefer a more accessible foliage experience with more than just leaves on the agenda, head to Portland.

Portland is a great base for a leaf-peeping excursion. Since it’s the last major town for hours, it’s the perfect place to set up shop and head north for a day of sightseeing through Maine’s smaller, more rural communities. There’s also plenty of foliage throughout the city itself. You can walk the tree-lined Eastern Promenade, a waterfront trail built along an old rail corridor, or climb atop the Portland Observatory for views of the ocean and surrounding landscape.

Portland is also known for its craft beer scene. From Allagash to Austin Street Brewery to Goodfire Brewing, the city’s breweries all serve up world-class seasonal beverages that are particularly enticing on a brisk fall day.

4. The Trailing of the Sheep Festival in Sun Valley, Idaho 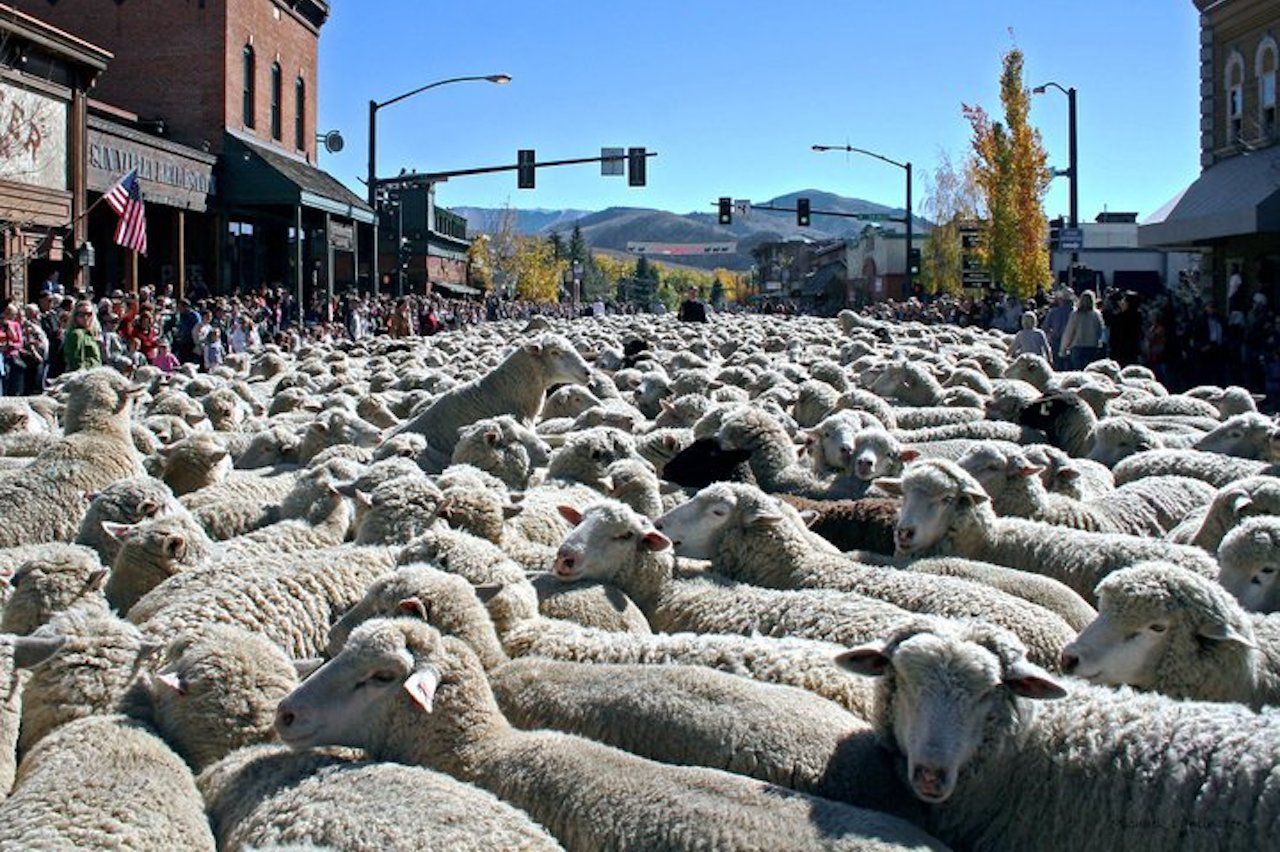 Photo: Trailing of the Sheep/Facebook

While Spain has its annual Running of the Bulls in Pamplona, and Sun Valley has its beloved Trailing of the Sheep Festival. Okay, the comparisons end there, but running with the sheep is a hell of a lot safer than running with the bulls.

The festival, which dates back to 1996, is rooted in the tradition of trailing the sheep to minimize conflicts between the sheep and users of the path. With the aim of preserving the stories and history of sheep ranchers, the festival has evolved to include family events like live performances, storytelling, a sheep cooking class, and the Big Sheep Parade featuring more than 1,500 sheep. This year the festival is taking place October 6 through 10, and you can sponsor a sheep if you really want to get involved.

If you don’t go for the sheep in October, you can still go for the 400 miles of mountain biking trails throughout the valley, or the scenic hike up Bald Mountain. There’s also horseback riding against a Hollywood-esque Western backdrop for those who truly want to embrace their inner John Wayne. 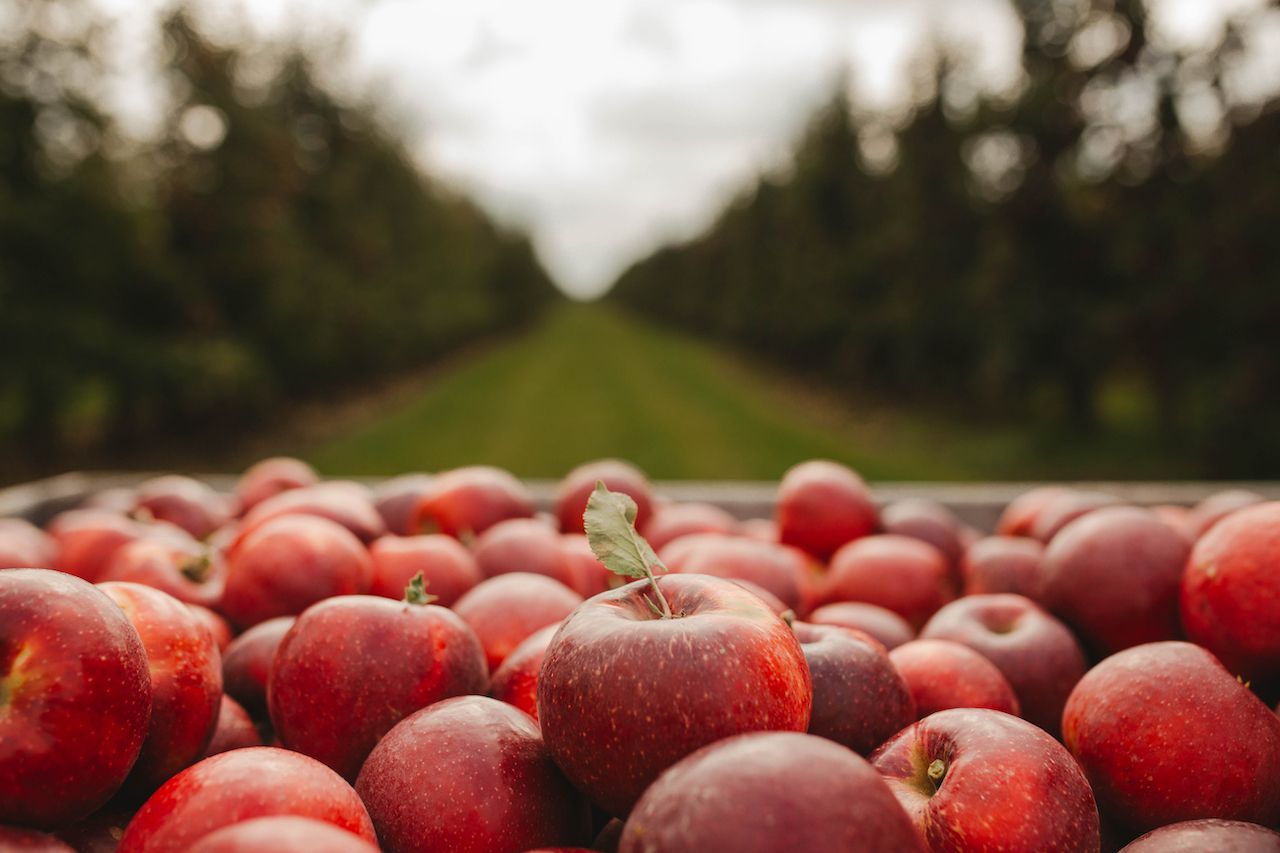 Comparing Biglerville to any other town in Pennsylvania would be like comparing apples to oranges. It might not be the Big Apple, but it’s certainly the apple of many local residents’ eyes. If the apple references haven’t made it painfully obvious by now, Biglerville is known for its apple tradition, and it wears that tradition on its sleeve.

Located in the heart of Pennsylvania’s apple country, the town of just 1,200 people is home to the National Apple Harvest Festival, held every October. This year, the festival is taking place on the first and second weekends of October. The event is a true celebration of fall, with a full lineup of live music, homemade fall foods, handcrafts, and your favorite apple celebrities like Johnny Appleseed. And when you’re taking a break from the festival itself you can always hit up the National Apple Museum, which is open from May through October.

To fully appreciate Biglerville, you really do need to be into apples. Or applesauce at the bare minimum. However, those who prefer wine to apples will also feel welcome here. The town is home to Boyer Cellars, a winery tasting room with both indoor and outdoor seating. Here, you can enjoy a variety of traditional wines, sparkling wines, and hard ciders in a tasting room with views of the (what else?) apple orchard. 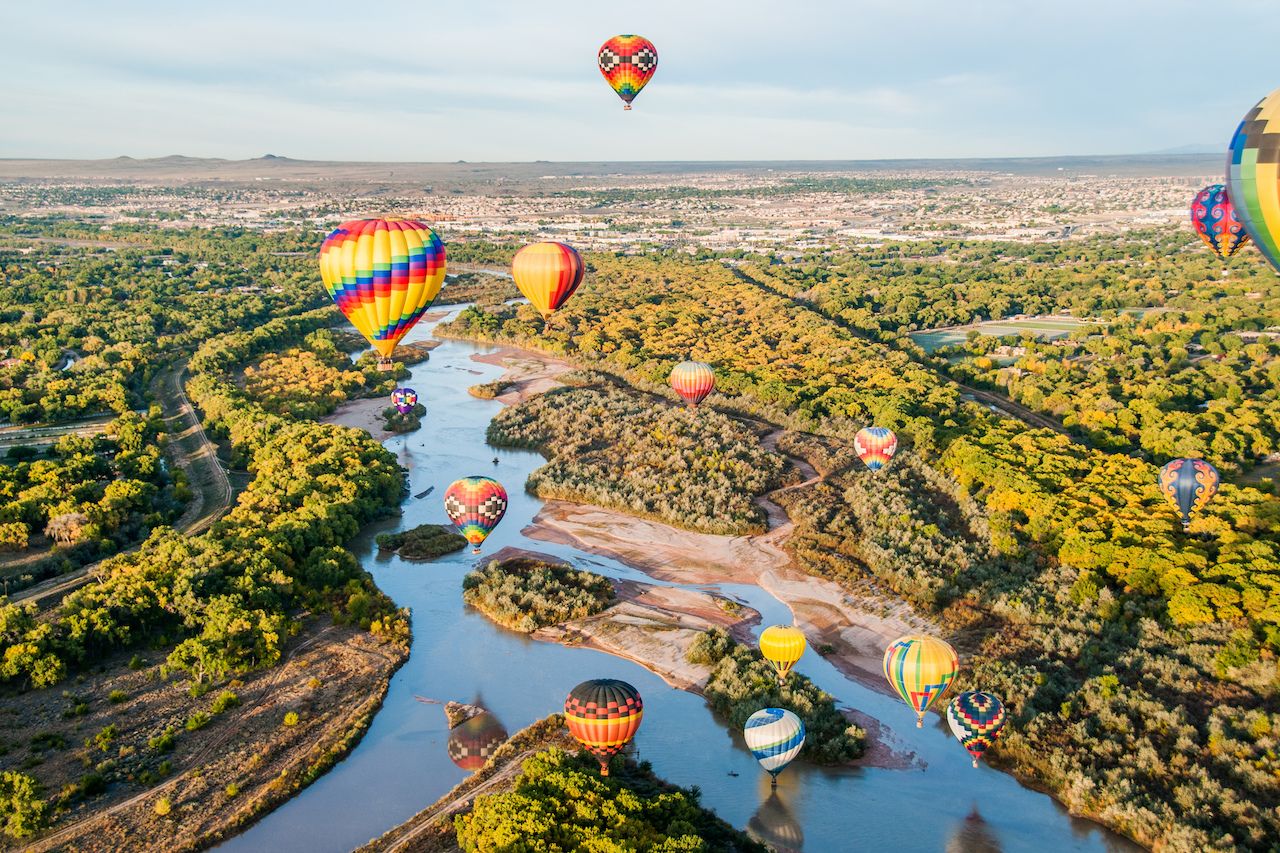 New Mexico doesn’t exactly wrap its visitors in fall colors like New England does, but it does offer a colorful sightseeing experience of another variety. Instead of looking around at all the changing leaves, visitors to Albuquerque in October might find themselves looking around at the colorful balloons dotting the sky above.

The Albuquerque International Balloon Fiesta takes place October 2 through 10, and features hundreds of balloons that soar over the Rio Grande Valley. Picture a Macy’s Day Thanksgiving Parade of quirky characters, but all in balloon form. The biggest hot air balloon festival in the world includes a Balloon Glow, when grounded balloons are all lit up, an AfterGlow Fireworks Show, and a balloon rodeo spotlighting the most inventive designs. There are also concerts, dance performances, and a chainsaw carving demonstration, and, of course, balloon rides for those who didn’t BYOB (Bring Your Own Balloon).

If the views from a hot air balloon don’t cut it for you, check out the Sandia Peak Aerial Tramway, which ascends over 10,000 feet to the peak of the Sandia Mountains, where you’ll have panoramic views of the surrounding desert. You could also just stay grounded and hike or bike the Sandia foothills, or stroll through the city’s historic Old Town. 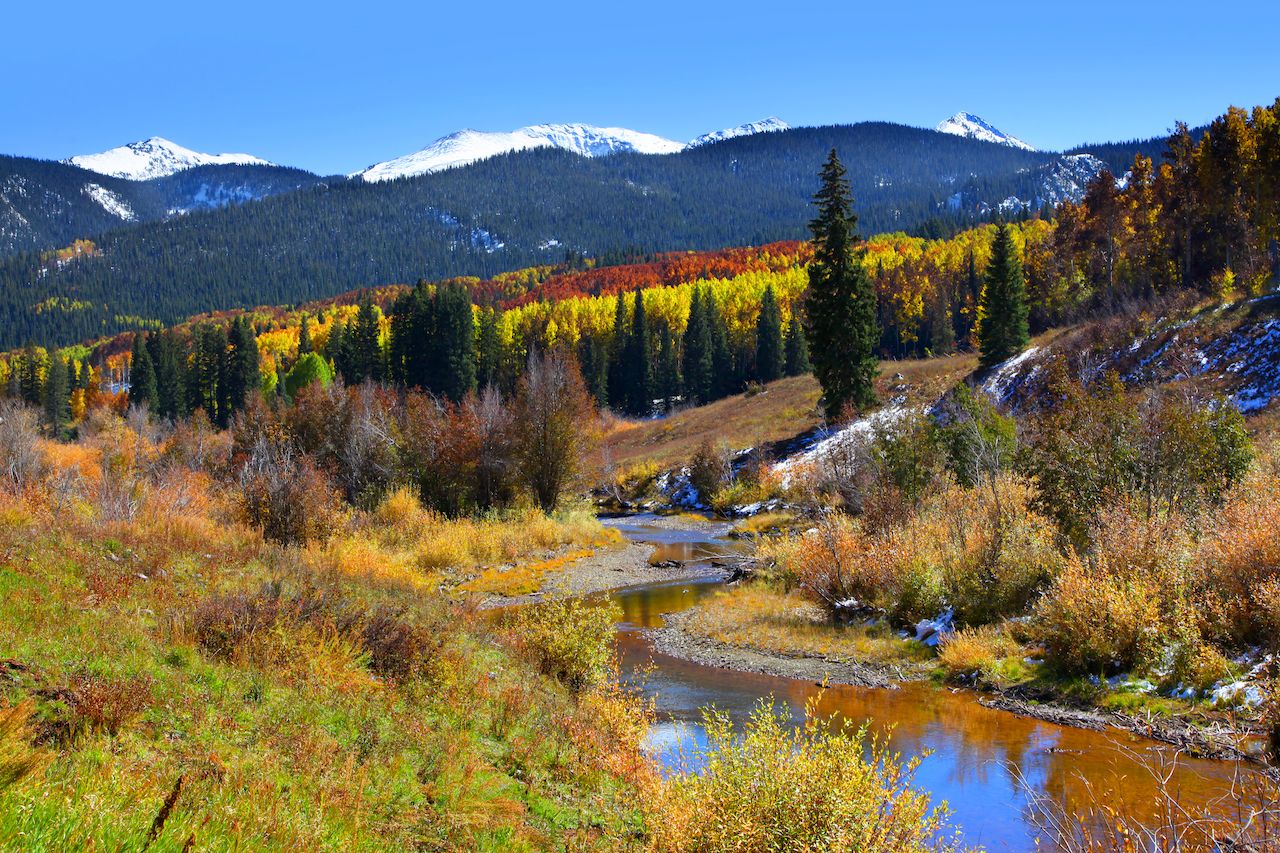 Stargazing is one of those activities you really have to take advantage of before it’s too late in the season. Yeah, the night sky is beautiful year-round, but no one wants to sit outside at 2 AM in January trying to glimpse the Milky Way before they freeze to death. That’s why you should squeeze your stargazing trip in during fall.

Colorado is known for its breathtaking skies and low light pollution, and Gunnison is probably the best place to stargaze in the state. Located in the heart of Gunnison Valley, Gunnison is home to the Hartman Rocks Recreation Area, which has a desert landscape that’s ideal for night-sky viewing. There are several hiking trails here perfect for an evening hike, and campsites where you can set up a tent and gaze upwards all night. Black Canyon of the Gunnison National Park is another scenic area, and it’s known for its steep Precambrian rock canyon that any visitor — stargazer or not — should be sure to check out.

The best way to explore the area is probably by taking the West Elk Loop, a scenic byway that passes through Gunnison, Crested Butte, Paonia, and other Colorado mountain towns. The Gunnison River is the epicenter of outdoor recreation in Gunnison, flowing right through town with class I and II rapids. You can float down the river for a leisurely afternoon, or have a more intense rafting experience. There’s also a whitewater park for even larger rapids.