Like most capitals, Kiev gives you a limited impression of what the country is really like. So once you’ve seen the city’s landmarks and wandered around the best neighborhoods, it’s time to get out into the wild. Kiev is within a few hours’ drive of beautiful natural spots, man-made sights, and, of course, Chernobyl. Rent a car or book a tour, and take a day trip to one of these locations. 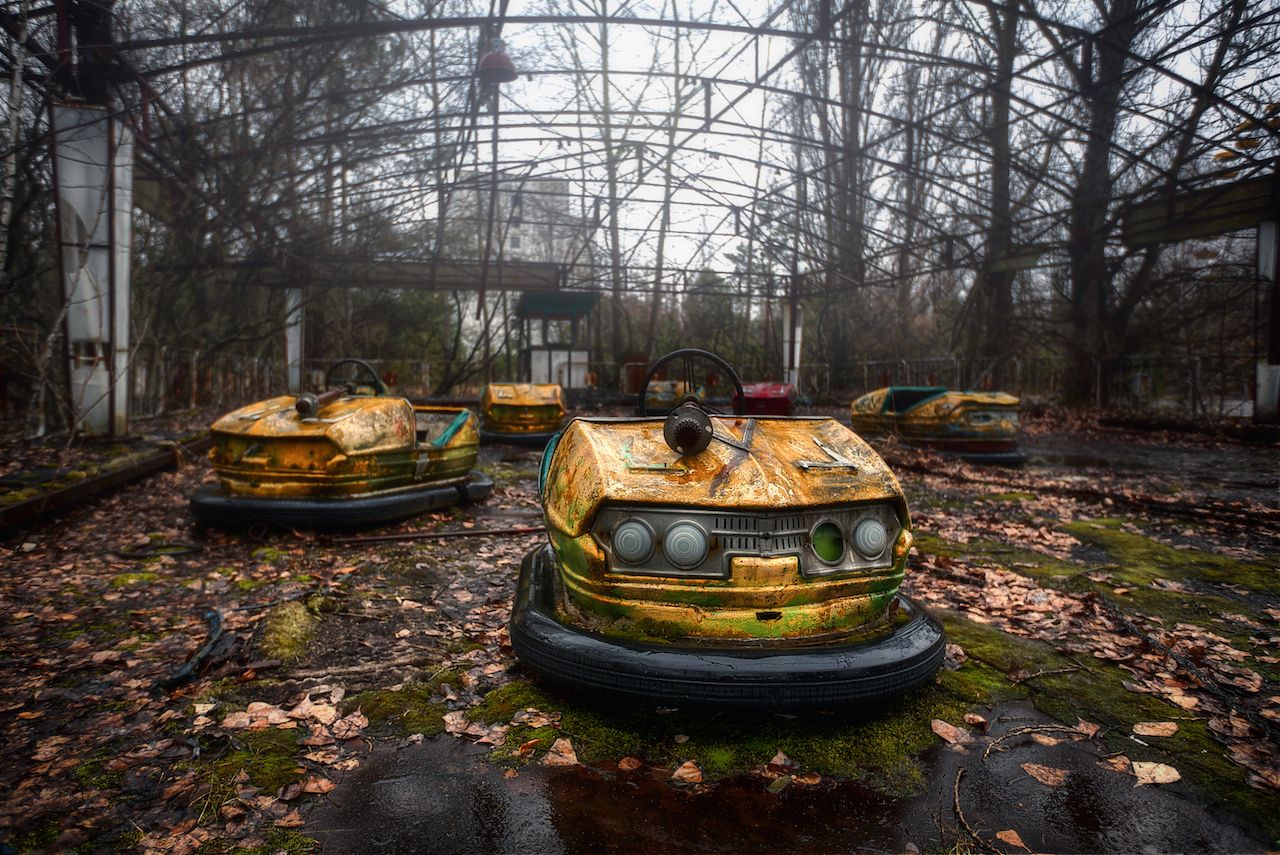 Chernobyl — After the HBO show took TV ratings by storm, even those who had never heard about Chernobyl started flocking to the sight. If you’re one of the people intrigued by the biggest nuclear disaster in history, you can take a guided tour to Chernobyl and see the ghost town of Pripyat and the reactor itself.

Now, the first question on your mind is probably, “Is it safe to go?” According to the tour company, it is — as long as you stay on the route and follow the guide’s safety instructions. The route is away from the areas that are still contaminated, and you’ll be equipped with a radiation meter to monitor your levels.

The tour will give you a sneak peek into abandoned Pripyat homes, where dusty dolls are still waiting for their owners. You’ll also be able to see the deserted amusement park and ominous Red Forest. The fee for the tour includes transfer to the sight and lunch at a real Chernobyl cafeteria. Just keep in mind the site is a tragic one, and keep the selfies to a minimal. 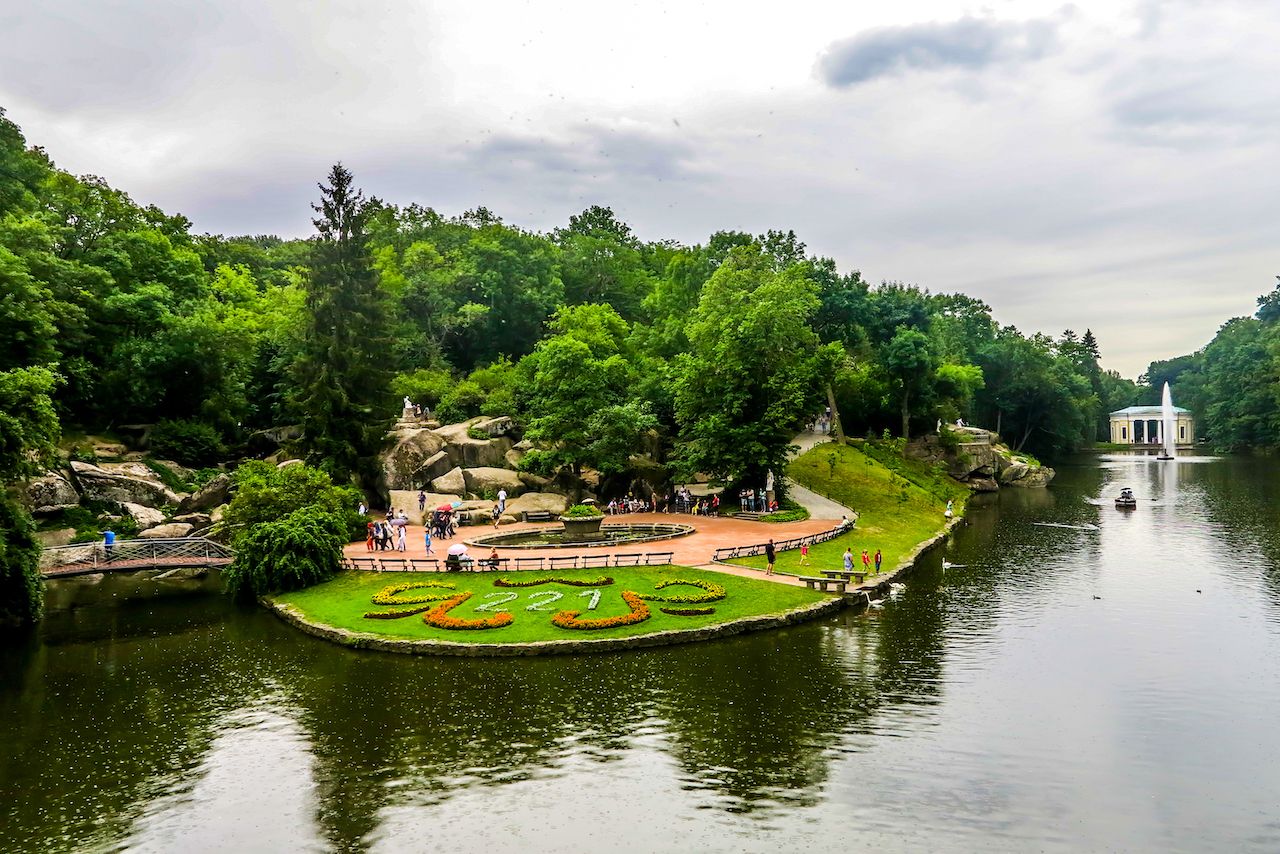 Sofiyivka — The small town of Uman some 120 miles south of Kiev is known for a unique park that’s over 200 years old. A Polish landlord built Sofiyivka for his homesick Greek wife, so the park is inspired by ancient Greek legends. Every grotto and gazebo is connected to a myth or a god, and every waterfall and cliff was built by hand by the landlord’s peasants. Today it’s also the national arboretum, so add the thousands of local and exotic plants that grow here, and you’ll see why Sofiyivka has been proposed as a UNESCO site.

You can get to Uman by car, by bus, or with a carpooling service called Blablacar. There’s a fee to enter Sofiyivka, but it’s less than $3 for an adult ticket. Ask for a tour in English if you want to hear Sofiyivka’s myths and stories; they are plentiful. The park also has a cafe and restaurant. 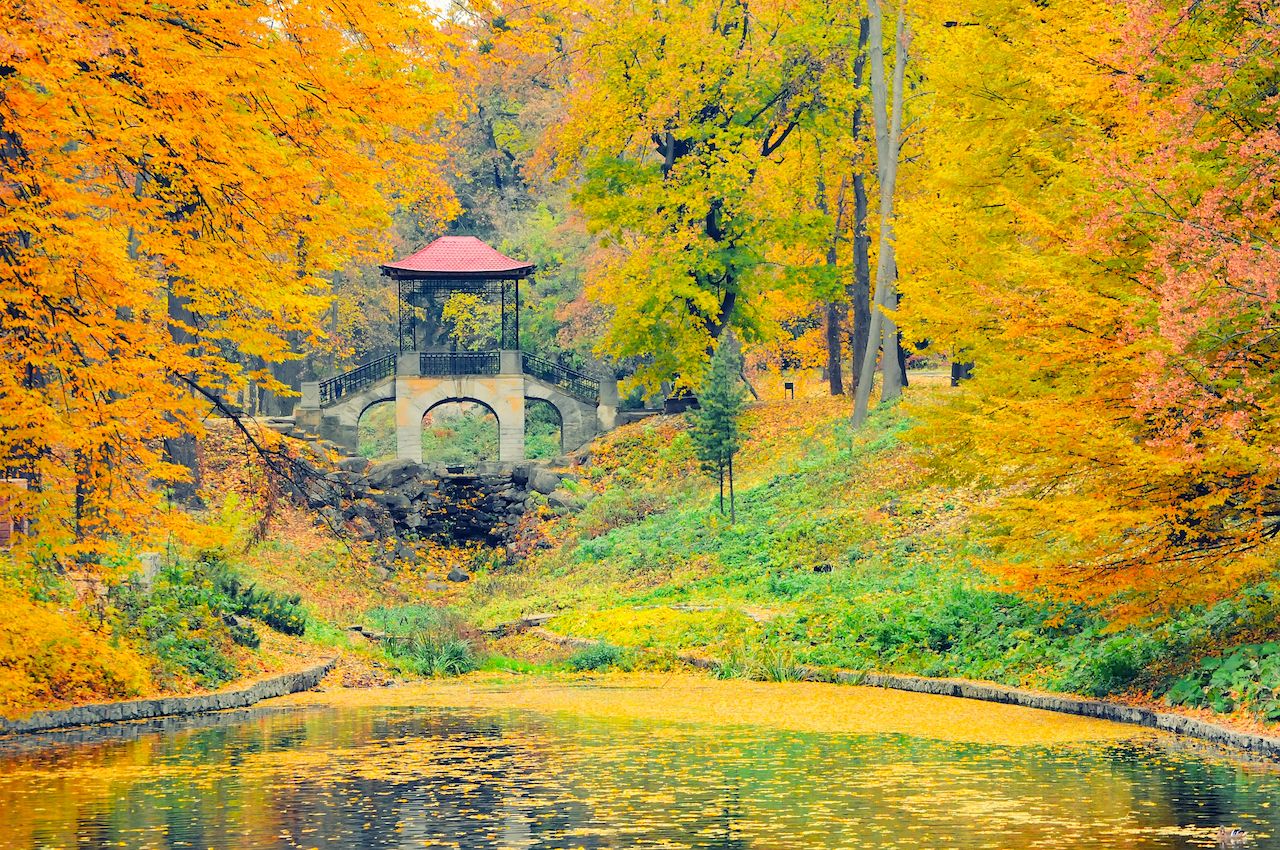 Oleksandriya — If Sofiyivka sounds like too long a trip, there’s an equally beautiful park closer by, in Bila Tserkva. Oleksandriya is a little newer and bigger than Sofiyivka, spanning nearly 990 acres. Even though it doesn’t have the same romantic backstory and theme, it’s a lovely place to spend a day. Its massive old trees provide ample shade, and the river and lakes will cool you off in the summer. And as a bonus, Oleksandriya is somewhat underrated, so it’s likely to be less crowded on the weekends than Sofiyivka. Of the two places to eat in the park, Cafe Oleksandriya is more stuffy and white table-clothed. Go with the rustic Cafe Kuznya, or “Cafe Forge,” which serves hearty Ukrainian fare. 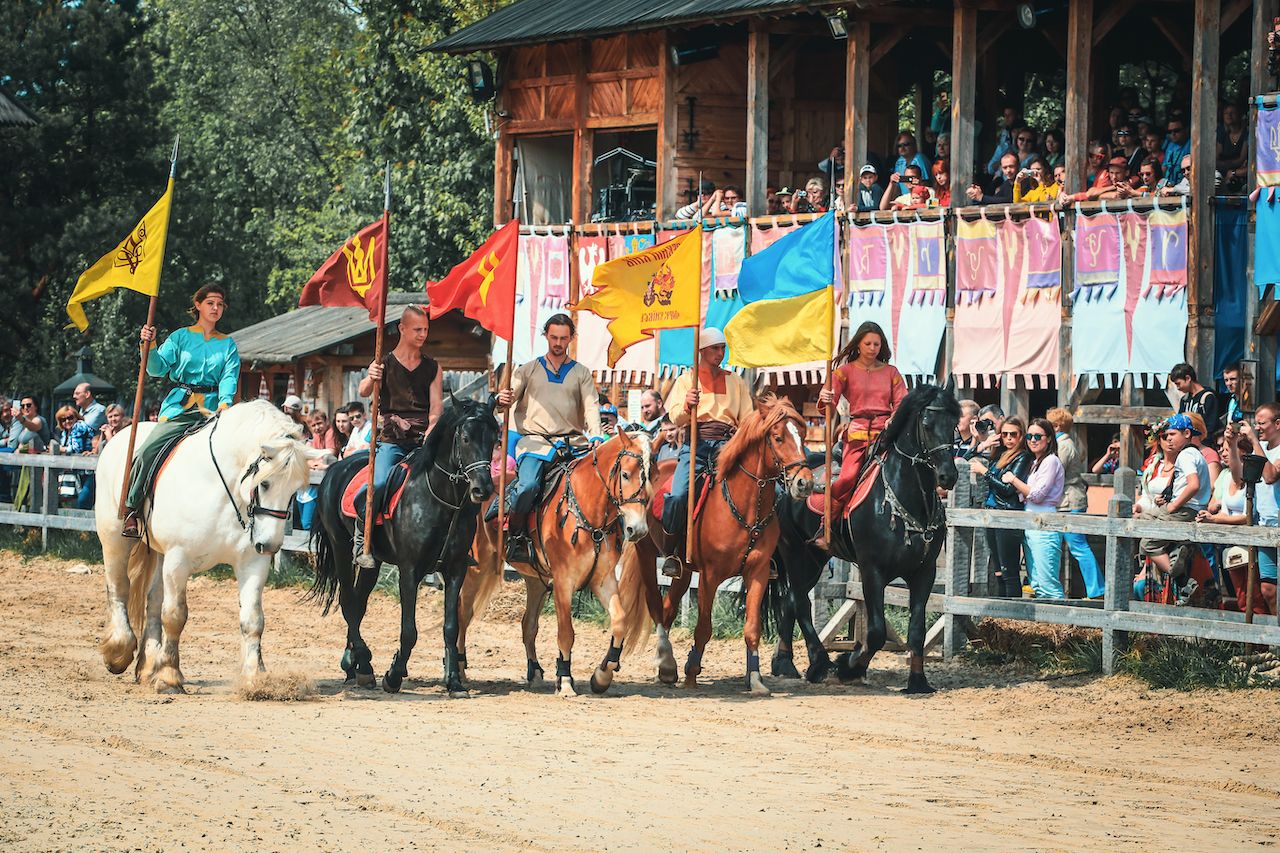 The Kievan Rus Park — You may not know it, but Kiev was the capital of a medieval state called Kievan Rus as early as in the ninth century. In terms of area, Kievan Rus was the largest European state in its day, at its height comprising most of modern-day Ukraine and Belarus, as well as parts of Russia, Finland, Lithuania, and Latvia.

You’ll still find traces of that Slavic civilization in the names of Kiev neighborhoods and metro stations, but there’s also a whole theme park dedicated to Kievan Rus. The Kievan Rus Park is a real-size replica of medieval Kiev and holds various events from pagan festivals to horse-stunt shows. On event-free days, you can hone your archery skills, take a pottery or blacksmithing class, or try on medieval costume and armor. All that within a 45-minute bus ride from Kiev, and for a reasonable fee. 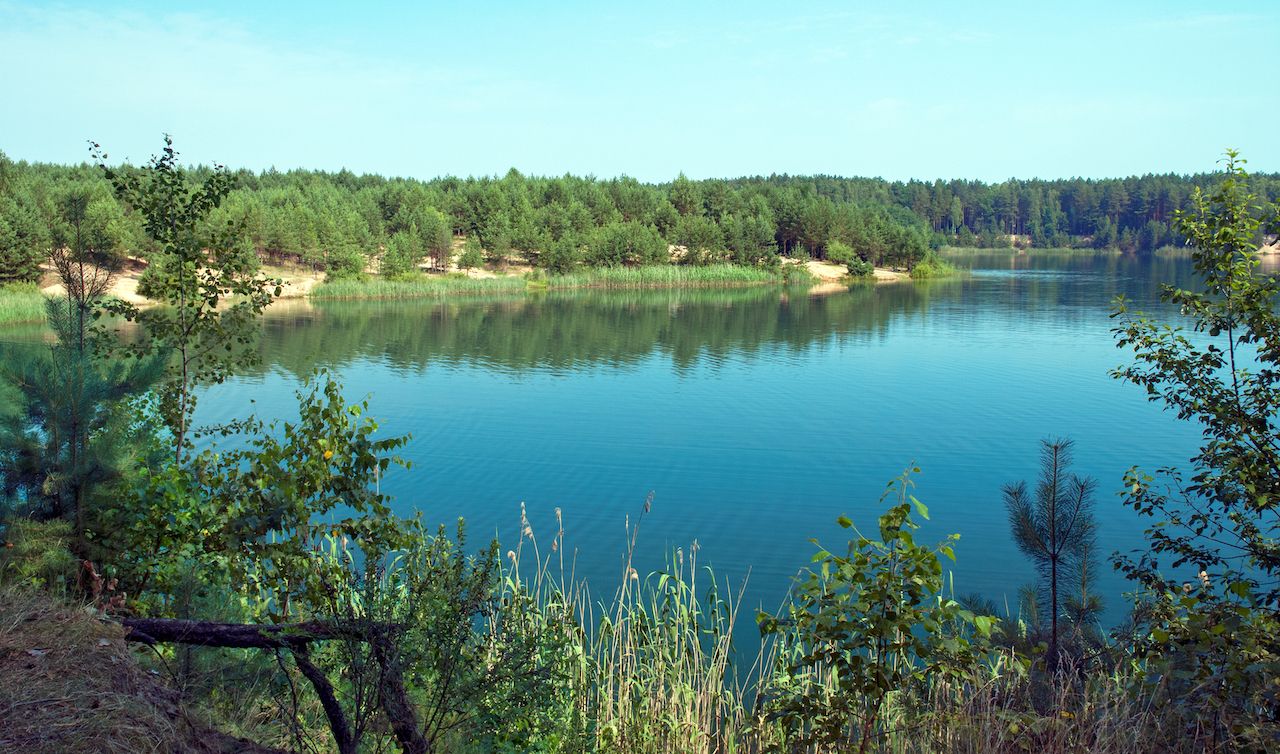 Holubi Ozera (The Blue Lakes) — The Blue Lakes in Oleshnya, about 130 miles north of Kiev, aren’t actually lakes. They are old quartz sand quarries, and it’s the quartz sand bottom that gives the water its blue color. The water is also believed to be good for your skin and hair. These clean lakes, framed by pine forests, are great for swimming and camping, so they get busy on summer weekends — drawing visitors from as far as Poland and Russia. Plan a trip during the week if you can, and consider staying the night in one of the area’s camping grounds, cheap homestays, or wooden cabins. 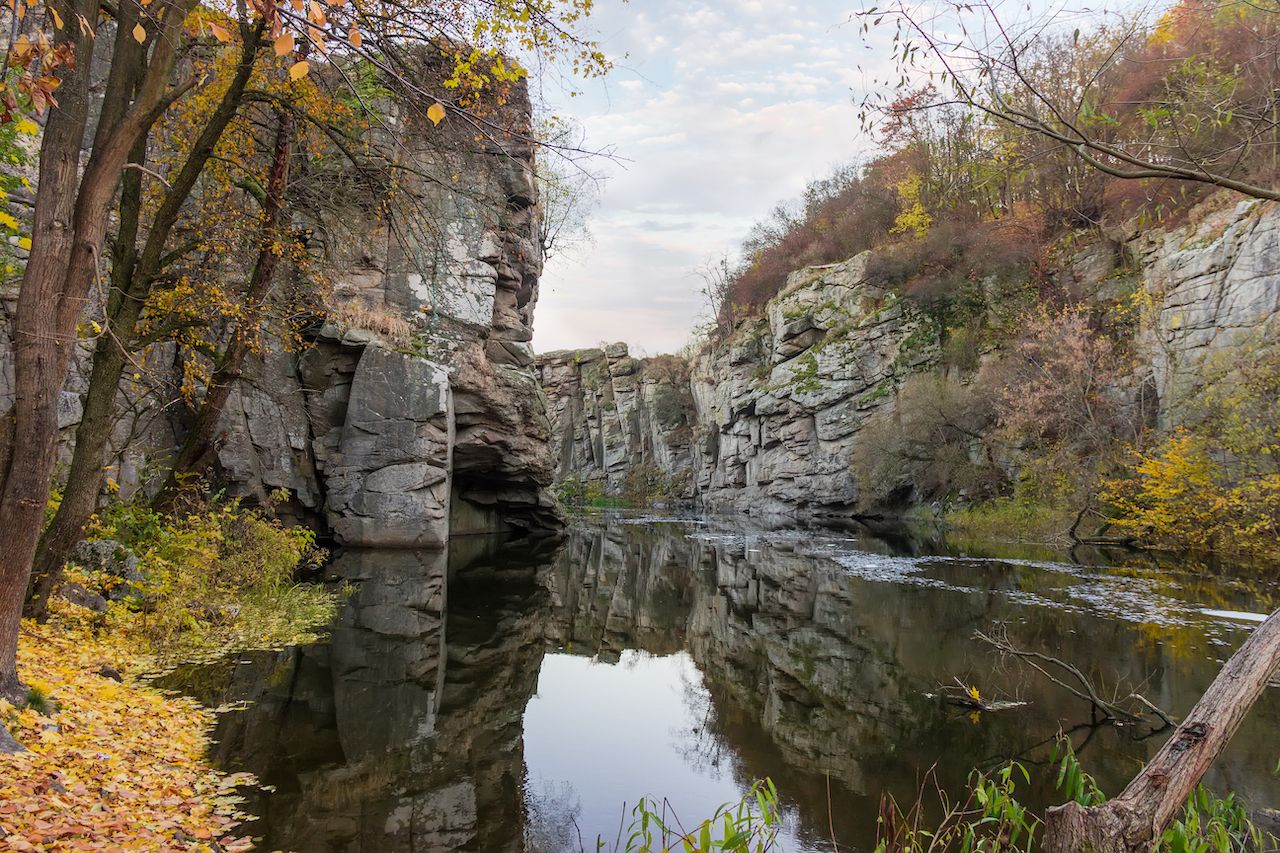 Buky Canyon — Buky Canyon is a narrow canyon, only 120 feet wide and three miles long. It’s lovely, though, with million-year-old granite cliffs towering above a river and plenty of woodsy foliage throughout. Some of these rock formations look almost like Stonehenge; others will remind you of Norwegian fjords. People come here for camping, swimming, rafting, and rock climbing, but a mini-hike and picnic are also a fun plan for the day. It gets very crowded on weekends, so come during the week. The trip from Kiev will take you two to three hours by rental car or as part of a guided tour.