Mardi Gras, Carnaval, Fat Tuesday — whatever you call it, the day before Ash Wednesday and the start of Lent is a time of eating and drinking in excess. Religious or not, people who attend Mardi Gras parties see levels of consumption matched only by holidays like Thanksgiving, only a much, much rowdier Thanksgiving.

Mardi Gras is French for Fat Tuesday (the 47th day before Easter), but the total season is longer than just one day. The season technically starts on January 6, the Christian holiday of Epiphany that’s also known as Three Kings Day or the Twelfth Day of Christmas. A wider term, Carnaval (or Carnival, depending on the country), is used in Brazil, Italy, and countries around the world to reference the entirety of the time between January 6 and whichever day Mardi Gras lands on. Carnaval is loosely translated to “farewell to meat,” a reference to the food traditions that the holiday started on.

The holiday dates back to pagan celebrations of the end of winter, the coming of spring, and all the fertility and babies that spring connotes. The celebrations were adapted by the Catholic Church as a time of excess prior to the banning of food from warm-blooded animals, alcohol, sex, and anything fun during Lent.

It’s not just Catholics and Christians who celebrate today. It’s been adopted and adapted by the secular population as a giant party, with Carnaval festivities taking place from Rio de Janeiro (considered the largest festival in the world) to Venice to Quebec City. It’s known as Karneval, Fastnacht, or Fasching in Germany and Fastevlan in Denmark. Some Slavic nations call it Fasiangy while Russia calls it Sedmica Syrnaja, or “butter week.” The party has spread as far as Catholicism and Christianity, and no matter what it’s called, it’s a ruckus filled with too much eating and too much drinking.

Mardi Gras and Carnaval foods can be pretty much anything, but one of two factors generally make a dish stand out as something that’s stood the test of time. The first is that the dish is particularly indulgent when it comes to meat and dairy, neither of which can be eaten again until Easter, and the second is that the food has a celebratory, and in some cases sexual, connotation. These are some of the most famous Mardi Gras and Carnaval dishes and foods to know. 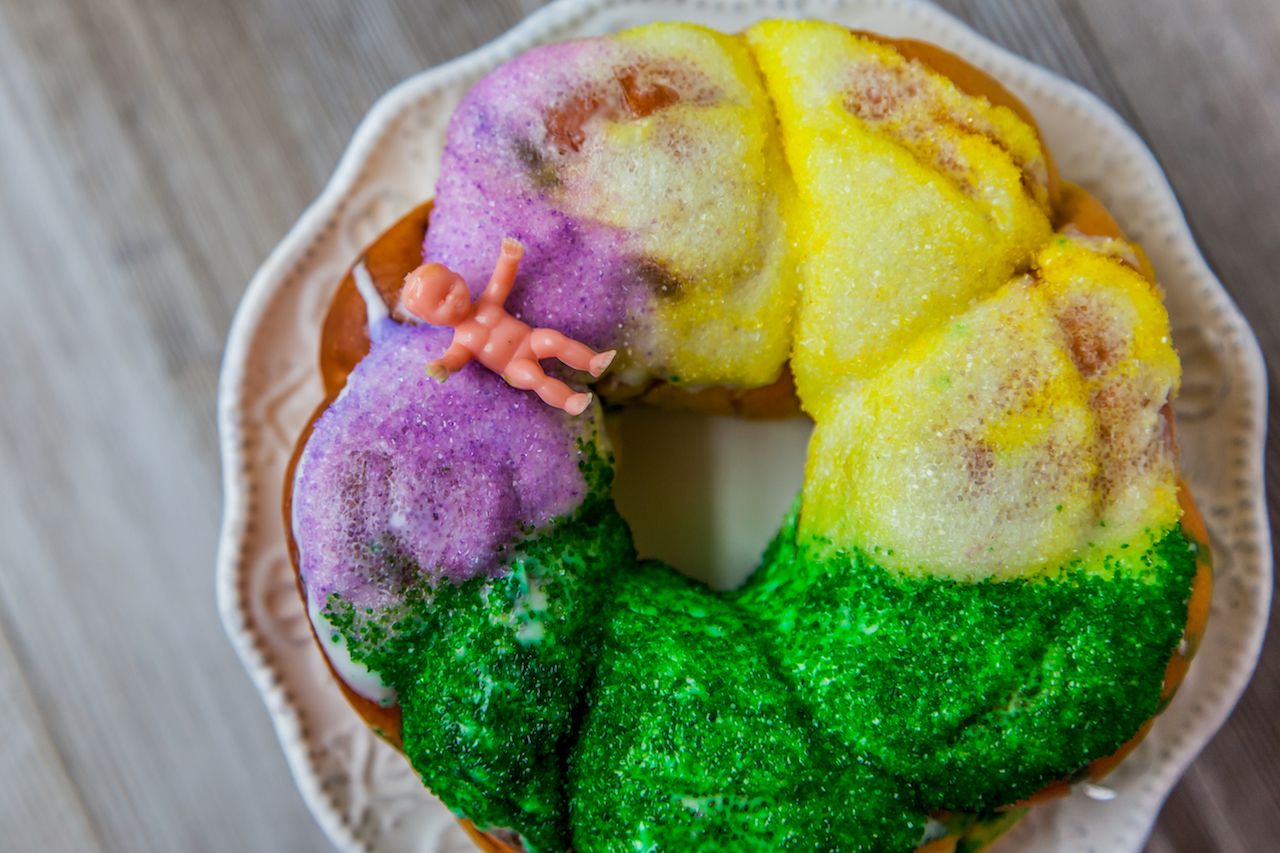 King cakes date back to early France and Spain and the Catholic celebration of Epiphany, or Twelfth Night, that happens on January 6. The night symbolically represents when the three wise men met baby Jesus after his birth. The cakes were associated with the days between Epiphany and Ash Wednesday, the start of Lent, sometime in the Middle Ages.

Today, the cake is still enjoyed around the world on Mardi Gras. In France, it’s called galette des rois (“cake of kings”), and in Spain it’s called rosca de reyes. The Portuguese call the cake bolo rei. King cake goes by different names around the world, but each has something hidden inside. Some countries, like France, go with a bean. In the US, it’s generally a plastic baby, a tradition that started with a bakery called McKenzie’s in New Orleans in the 1950s. Tradition holds that whoever finds the baby has to buy the next cake or host the next party.

King cake is far and away the most popular Mardi Gras food in the US, particularly in New Orleans and Louisiana. If you’re not heading south for the holiday, the good news is that many of the best king cake shops in Louisiana ship their goods so you can still get a taste.

Wherever you get your cake from, you’ll notice that almost all your options are covered in purple, gold, and green sugar or icing. Those are the city’s traditional Mardi Gras colors set by Rex, one of the oldest Mardi Gras krewes that has been participating in parades since 1872. 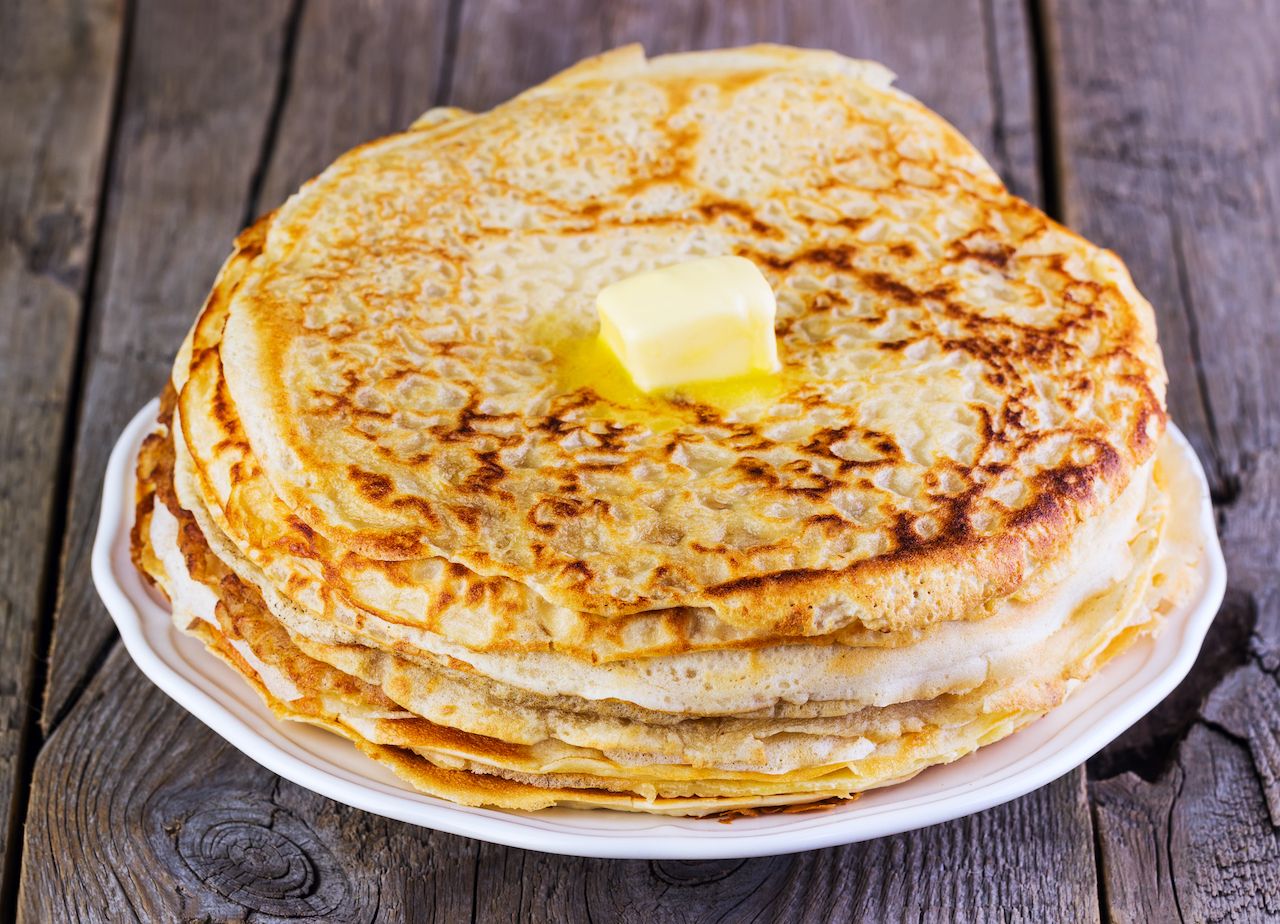 Mardi Gras has another name that’s more direct about the food reference: Shrove Tuesday, also known as Pancake Day. Held on the day before Ash Wednesday, Shrove Tuesday is traditionally when Christians in England went to confession to be absolved from their sins (or “shriven”). It was the last day that the devout could eat meat products until Easter 47 days later, giving everyone one more chance to use up all their eggs, dairy, and animal fat. You know what uses a lot of eggs, dairy, and fat? Pancakes.

Today, Pancake Day is primarily celebrated in the UK, Ireland, Australia, and Canada. While the idea behind it has changed with modern times, people still worship the pancake. The town of Olney in the middle of England has held a pancake race — an event where local women wear a skirt and race while flipping a pancake — since 1445. 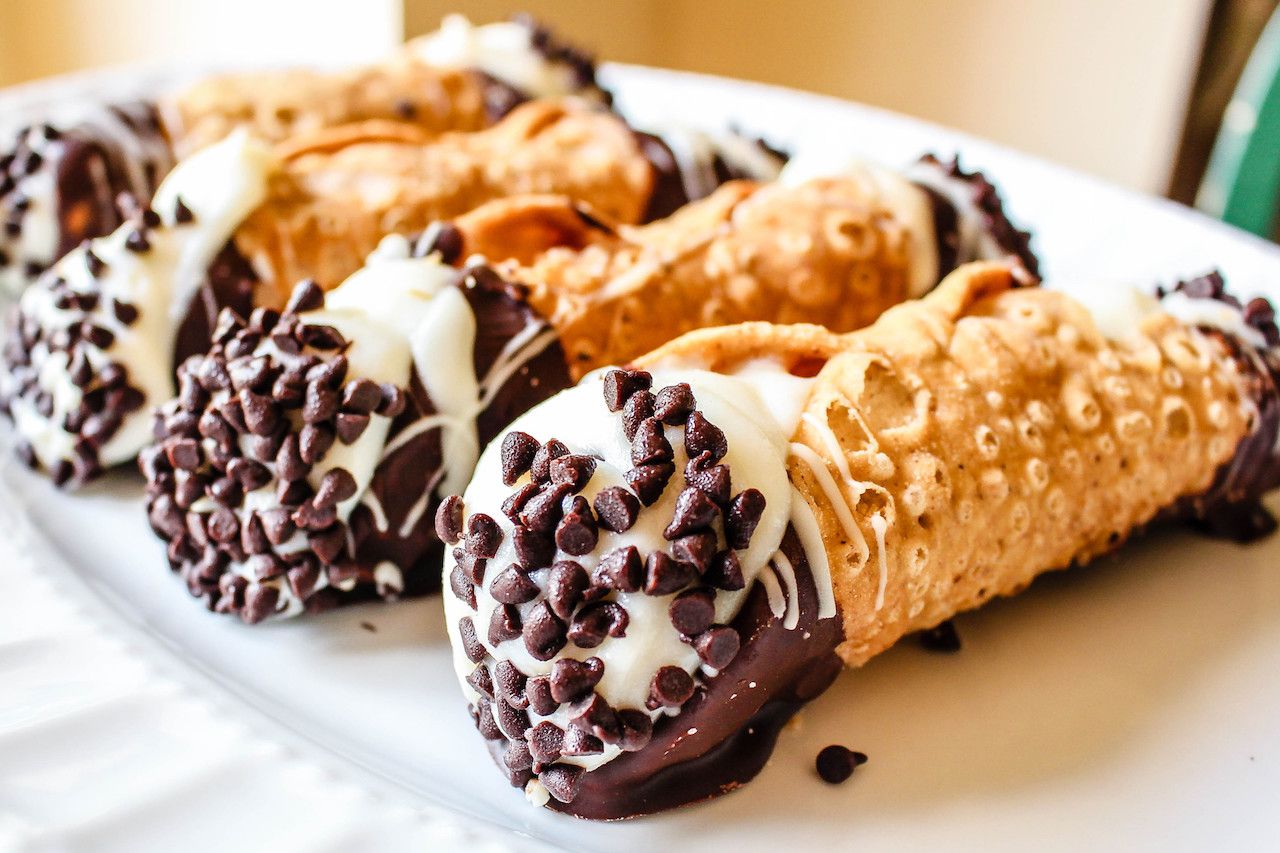 Cannoli (singular: cannolo) were invented in Sicily in the Middle Ages. They were originally made by wrapping a flat piece of dough around a sugarcane stalk, which was brought by conquerors from the Middle East, and then frying it. The shell was then stuffed with fresh sheep’s milk ricotta cheese. The cheese came easiest in the spring around the same time as the final days of Carnaval, and the treat became associated with the holiday. The phallic cannoli were also associated with fertility, further endearing them to the free-for-all debauchery of pre-Lent days.

Cannoli were sold around Italy during Carnaval throughout Middle Ages, including in Venice, which is still to this day known for its celebration. Today, however, they’re sold year-round, and the fillings aren’t limited to fresh sheep’s milk ricotta. 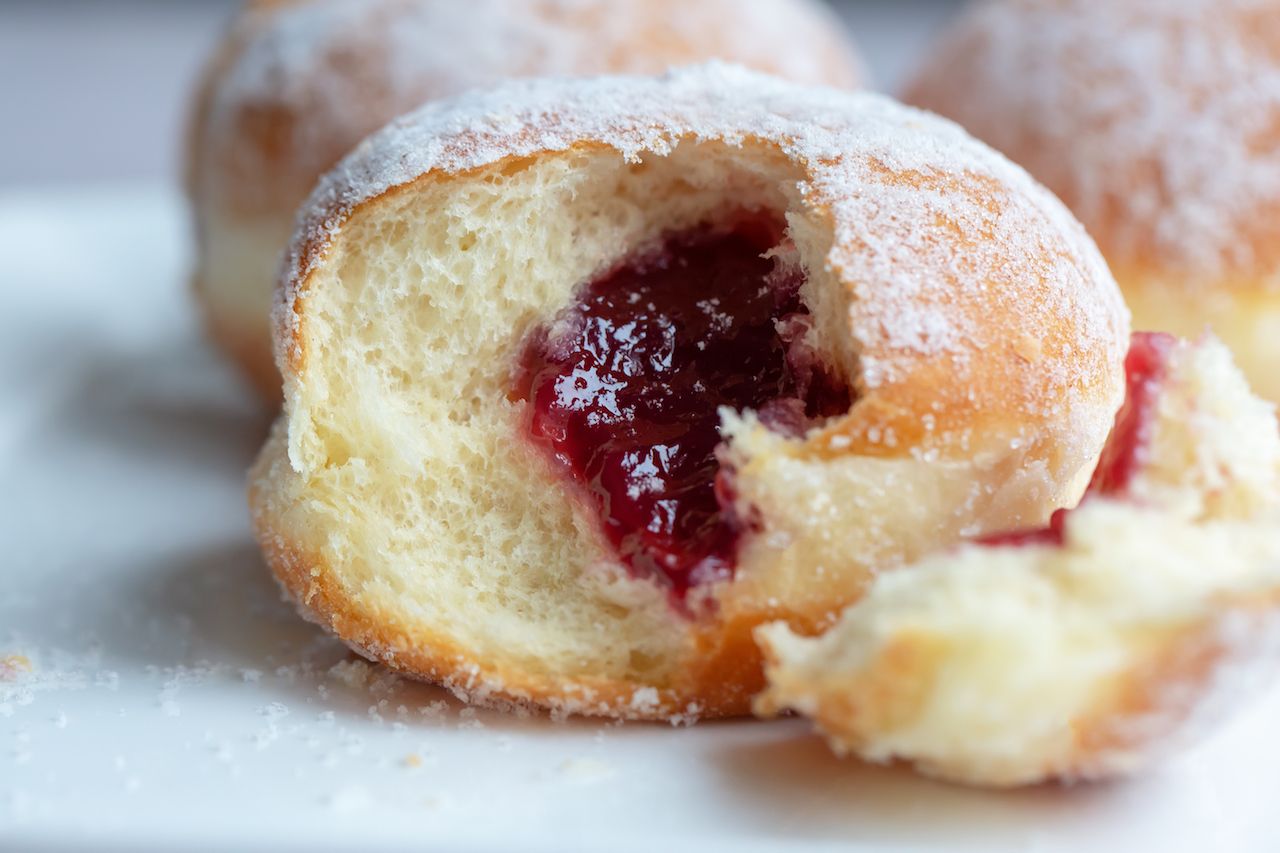 Krapfen, a type of round doughnut filled with jam, are to Austria what king cakes are to Louisiana. In a similar way that pancakes were made to use up the eggs, dairy, and lard in England, krapfen are made to empty the larder for the Carnaval celebrations in Austria and parts of the former Austro-Hungarian empire.

Jelly- or jam-filled doughnuts are also popular in Germany and go by different names depending on where they’re served. It’s krapfen in southern and central Germany, kreppel or kräppel in central Germany, fastnachtsküchelchen (“little Karneval cakes”) in the Rhineland, and Berliner in northern Germany. In Berlin and East Germany, the doughnuts are called pfannkuchen, which means pancakes in other parts of the country.

Carnaval is just as much about tricks and one last bit of fun before Lent as it is about eating. In Germany, both are combined. Beware of a common prank where a doughnut is filled with mustard and placed alongside the sweet versions, just waiting for someone to take a bite and be extremely disappointed.

Scandinavian countries often serve a jelly- or whipped-cream-filled doughnut during Carnaval as well. They’re called semla in Sweden and are mixed with cardamom and filled with almond paste.

Denmark and Norway have fastelavnsboller, which can be traced back to the pagan spring fertility celebration of Fastelavn. Blossoming birch trees signaled the fertility of the season, and those that didn’t blossom were considered to have the fertility inside waiting to wake up. (The birch branches were later associated with Christ when Christianity came to the area.) On the Sunday before Ash Wednesday, children would get up early and whack their parents with birch sprigs. In return, they’d get the fastelavnsbollers filled with whipped cream and covered in sugar. Denmark celebrates similarly on that Sunday, when kids go door to door singing ”boller op, boller ned” (buns up, buns down). If they don’t get their buns (the fastelavnsbollers) then they’ll make trouble. 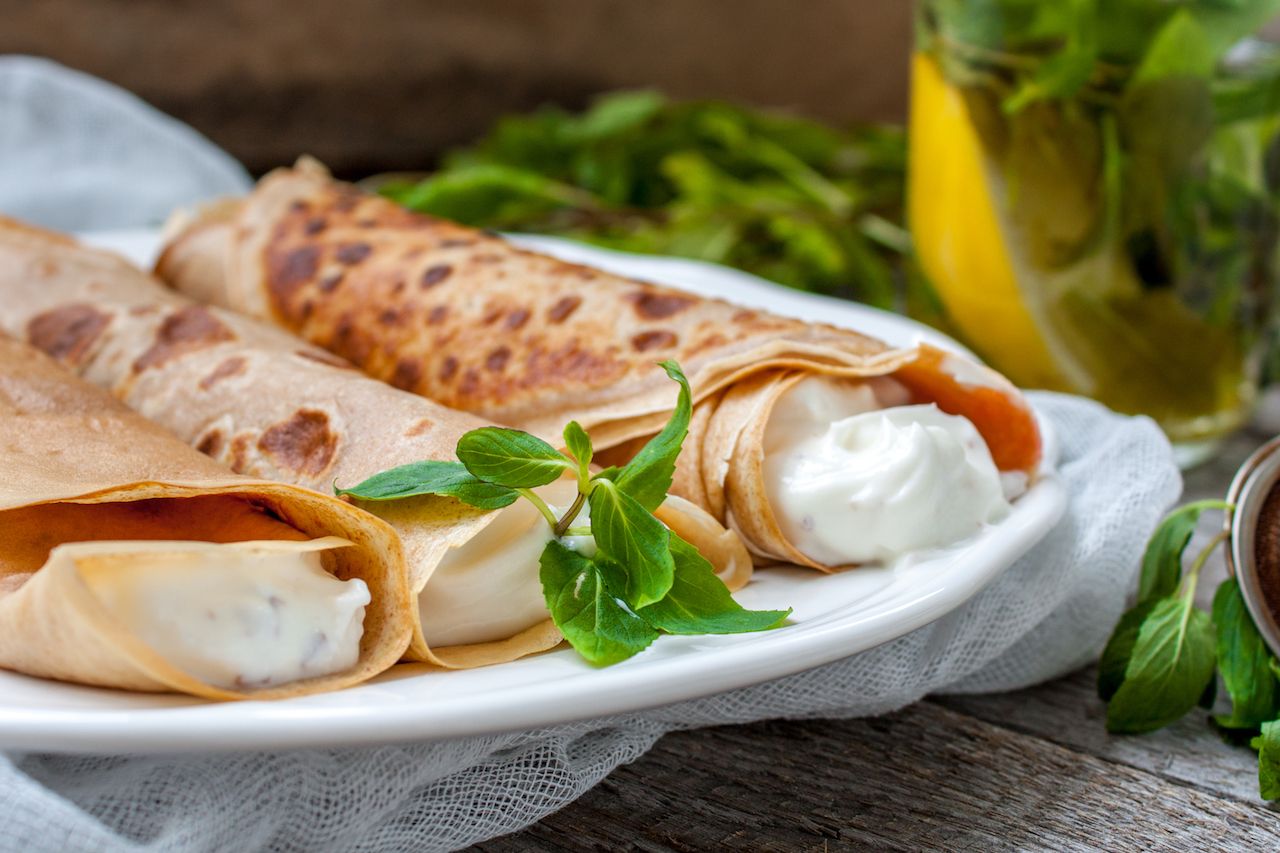 In Greek Orthodox traditions, when certain foods are given up is staggered. The last Sunday before the start of Lent is officially called the Sunday of Forgiveness. Meat is already off the table that Sunday, but thanks to an indulgence in everyone’s favorite dairy product, it’s also known as Cheesefare Sunday. That Sunday is the last day that people following the Orthodox religion can eat dairy until Easter.

In Romania, Cheesefare is celebrated with papanasi, which is like a sweet and savory doughnut that’s filled with soft cheese. The devout in Ukraine eat nalysnyky, or crepes that are filled will a soft cheese. 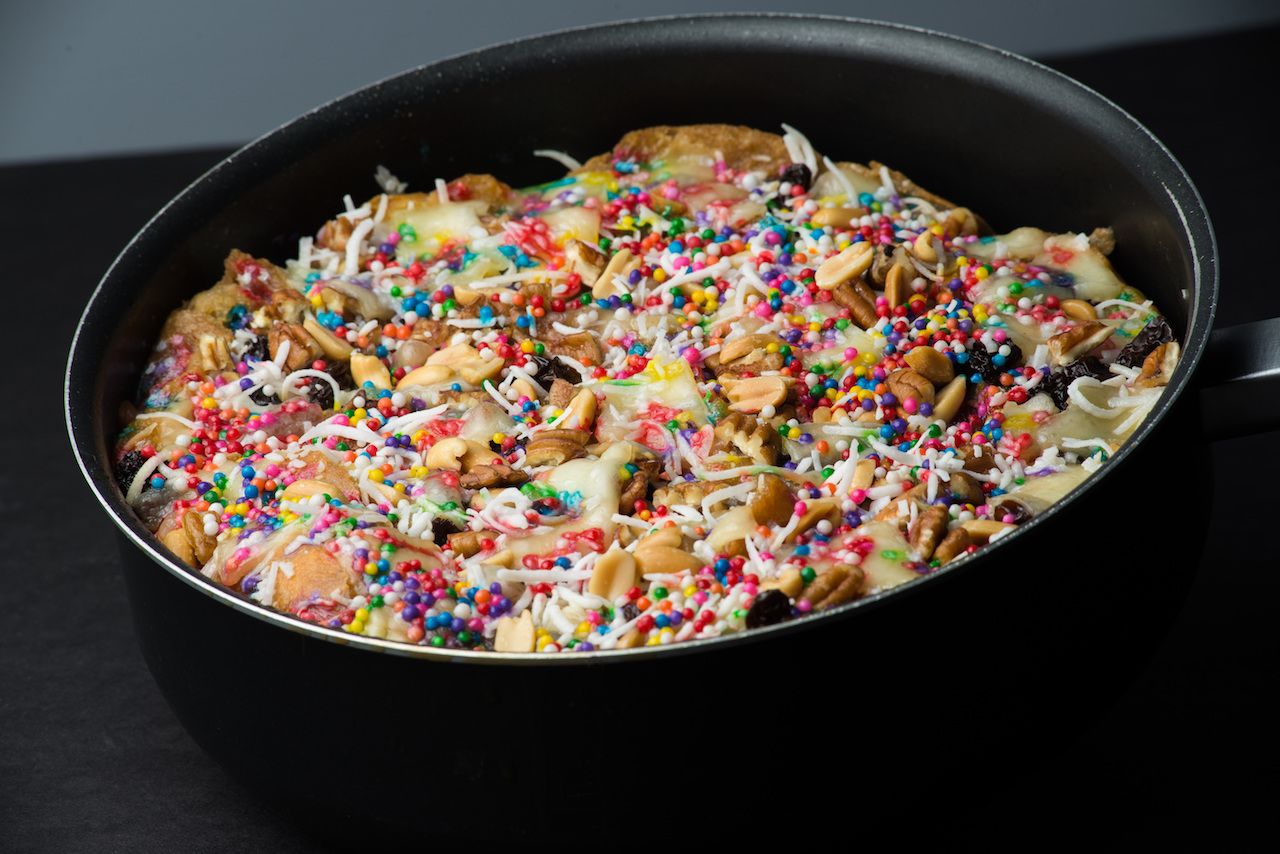 While much attention is given to pre-Ash Wednesday meals and what you can’t eat, what you can eat during Lent is just as important to the symbolism of the reason for Mardi Gras as a whole. Sundays, after all, are basically the cheat days of Lent when people are allowed to indulge in otherwise forbidden food. In Mexico, the cheat dish of choice is a bread pudding made with a clove and cinnamon sugar syrup called capirotada. Capirotada, like the Catholic religion itself, was brought to Mexico by Spanish conquistadors. It’s not an entirely Spanish (or even Catholic) food, however. The spices show Spain’s Moorish influence from when the Moors ruled parts of the Iberian Peninsula from 711 to 1492.

Religious Spaniards gave the Moorish spices religious symbolism, the Chicago Tribune explains. The bread stands for the body of Christ, the syrup for Christ’s blood, the cloves for the nails in the crucifixion, the cinnamon sticks for the wood of the cross, and the cheese put on top for the holy shroud. Today, capirotada may also include dried or fresh fruit and nuts, as well as any amount of sprinkles you desire.

FestivalsEverything You Need To Know Before You Go To Mardi Gras This Year
Tagged
Food + Drink Holidays
What did you think of this story?
Meh
Good
Awesome